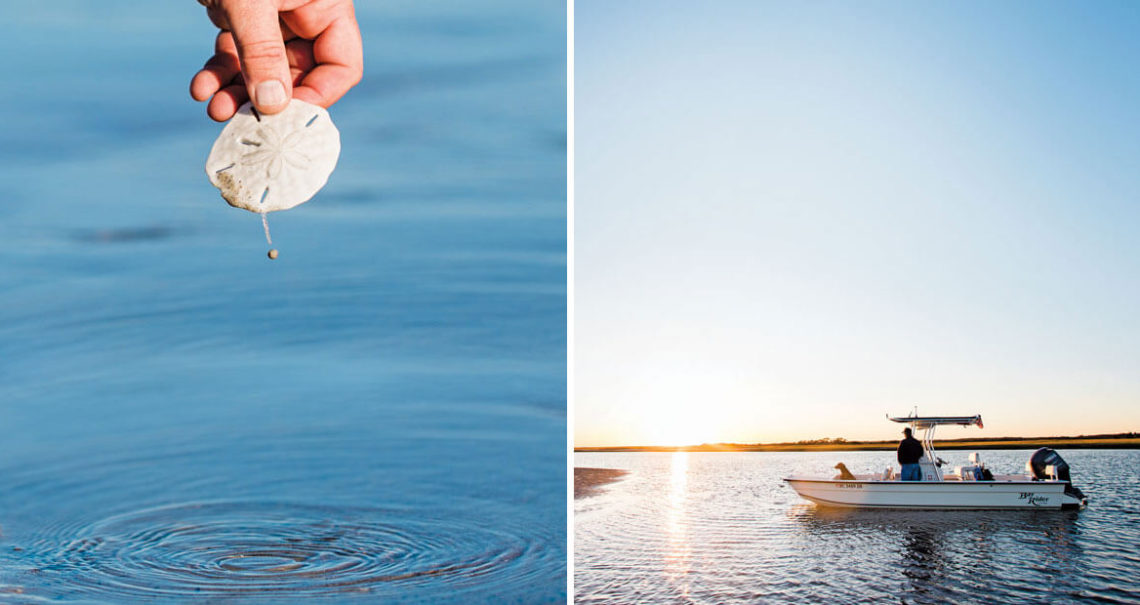 Darryl Marsh is one for quieter seasons. In the hectic summer, he loads his skiff with vacationers at Dudley’s Marina in Cedar Point and pilots them through the winding backwaters, past the Hammocks Beach landing, and over to Bear Island. There, locals and tourists from many states away compete with each other to find shells. The bounty is there, but it is spread among many.

Winter’s brisk temperatures and blustery winds may slow business, but Darryl knows that the off-season opens another door: to sand dollars. Lots and lots of sand dollars.

Because when the tide is out and competition is low, more treasures may be found by those who know where — and when — to look. “You’ve got to be willing to be cold and wear lined boots,” he says as he prepares to pilot his skiff toward Bear Island on this clear, crisp day. “But you wouldn’t believe what you can find.”

“There’s less competition out there, because it’s a sturdy person who beachcombs in January.”

For summer beachcombers, finding a whole sand dollar can feel as impossible as seeing the flip of a mermaid’s tail. But the advent of winter changes things. The wind off the Intracoastal Waterway blows over the beaches and inlets, bringing a deep sense of quiet and a welcome solitude that remains unbroken until the Easter crowds return. For shell seekers with grit and pluck, this is prime time to find Scotch bonnets and whelks, too.

“There’s less competition out there, because it’s a sturdy person who beachcombs in January,” says Terri Kirby Hathaway, a marine education specialist with North Carolina Sea Grant who seeks shells year-round in Southern Shores, where she lives. “But also, the waves are usually stronger, so that means more stuff might get brought up from the deep.” 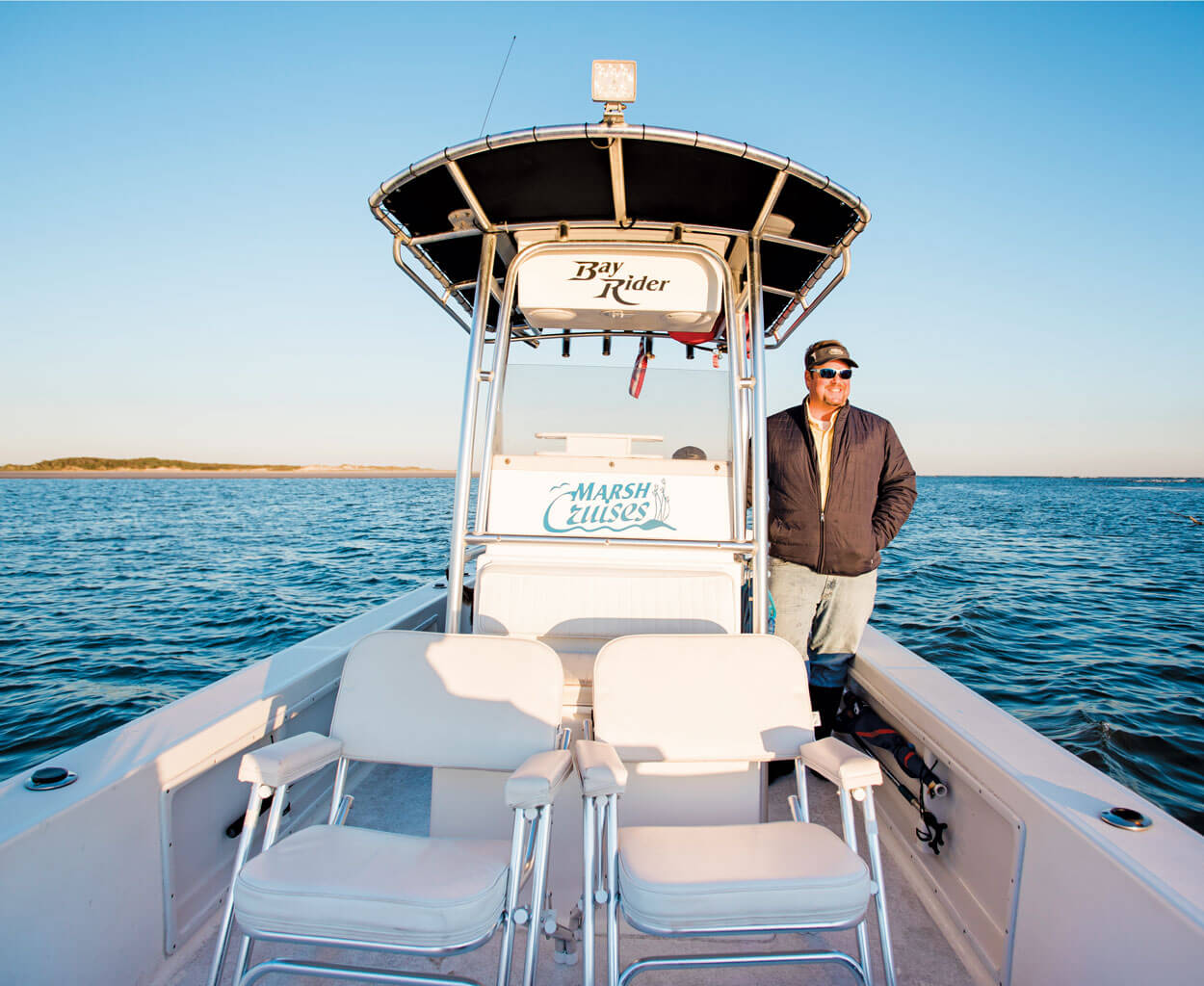 Sand dollars, Scotch bonnets, and whelks are plentiful in winter, when Captain Darryl’s guests have many of the sandbars around Bear Island all to themselves. (The Bear Island ferry doesn’t run January to March.)

Captain Darryl, as he’s known, has been traversing the waters of the Crystal Coast for 13 years, first for pleasure and now as a part-time tour guide through his business, Marsh Cruises. He and his fiancée settled in Swansboro nearly two decades ago after seeking a quieter existence on the coast, which they found in the colonial port town. Now, she runs a home decor shop on Front Street, and he takes summer renters and locals alike out for cruises: Adults look for shells; kids explore tidal pools.

On this off-season outing, his only crew is a silver Labrador named Buxton. Darryl pulls in his lines, and we fall in with other boats headed out. The engine maintains its low putt putt putt, and, with a satisfied thump, Buxton lies down at our feet. We clear the no-wake zone, Darryl throttles up, and the breeze turns into a welcome wind that beats at our skin, clearing away the funky smell of the marsh grass and replacing it with brisk salt air that feels primal, even ancestral.

We pass by Browns Island, and Darryl points to a sandbar on the Bear Island side, just revealed by the tide. “Nice and low,” he says of the water. “And there’s no one else out here. That’s a good thing.”

Buxton goes to the bow; he knows what’s coming. As soon as Darryl slows the throttle and gives the dog the go-ahead, Buxton leaps from the boat into barely a foot of water, stirring up the sand into watery clouds that mask what might be below. Darryl laughs and shakes his head. “You’re not making it easy, Buxton,” he says. 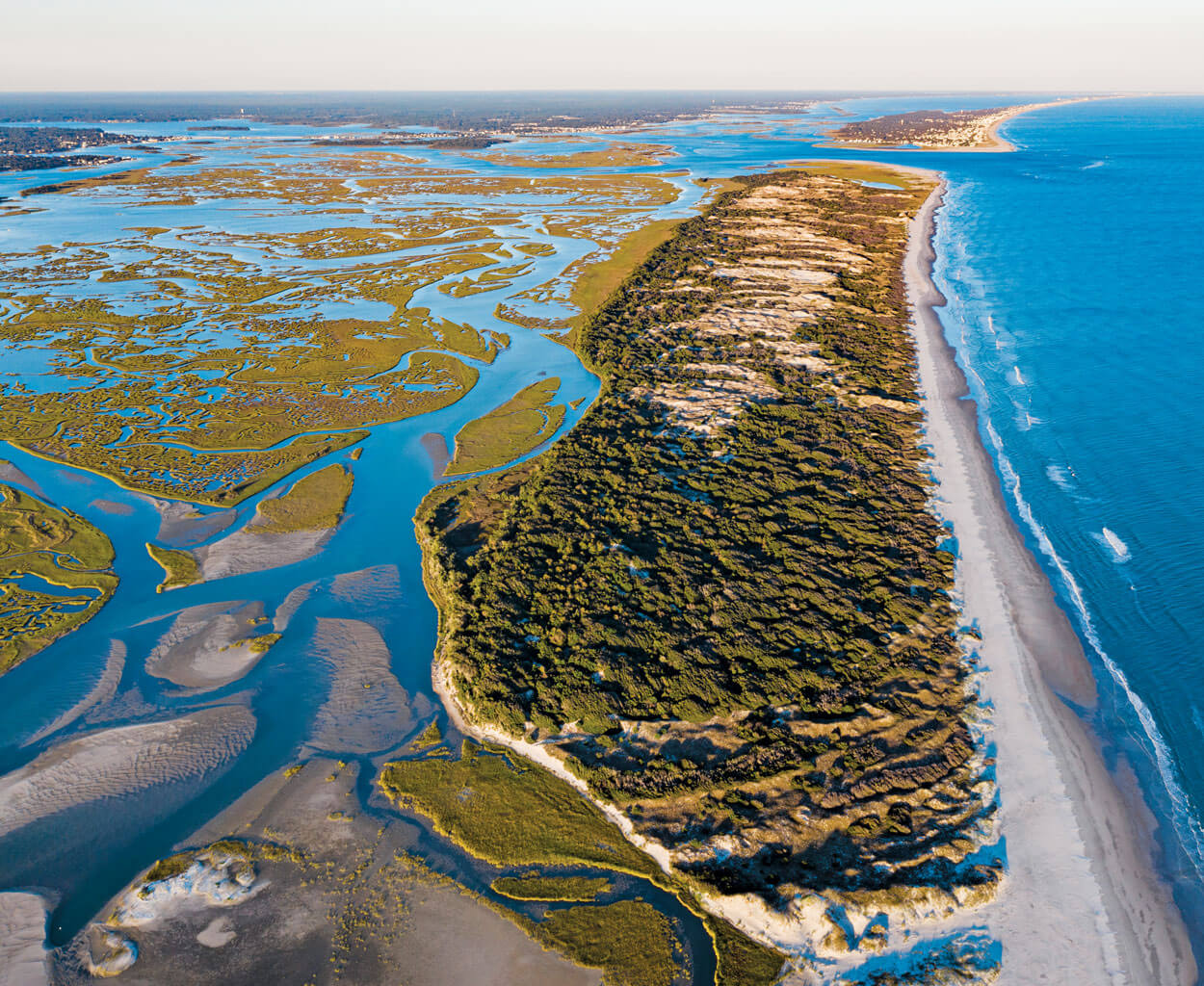 As we splash through calf-deep water, eyes focused on sand, Darryl explains the serendipitous nature of shell seeking. While it’s important to hit the right spots when the tide is low, there’s no predicting what you’ll find. The capricious nature of the pursuit is part of its magic. “I’ve had people come back with 50 sand dollars out here,” he says. “And then we come back out the next day, and nothing.”

The sand dollars found on North Carolina beaches are a species of keyhole urchin, which is not as romantic a moniker. But it’s more to the point. The sand dollars that we’re searching for are exoskeletal creatures called Mellita quinquiesperforata, which are scattered down the East Coast from Virginia to the coast of Brazil. When alive, they’re brown, and their skeleton, or “test,” is covered in a skin with tiny spines that help them burrow into the sand. They eat with a primordial contraption called Aristotle’s Lantern: five calcium carbonate teeth that, when broken out of the sand dollar’s test, resemble tiny white doves.

Some see spiritual meaning in those doves, as well as in the sand dollar’s five holes, which observant Christians say represent the five wounds of Christ on the cross. Others consider them coins dropped in the ocean by mermaids, or currency from the lost city of Atlantis. Still others think that finding a sand dollar, like a face-up penny, brings good luck.

Terri is more likely to argue that a good winter storm will bring luck — for shell seekers, anyway. Strong currents can toss whole shells up from the deep. “I was out in March one year when there were hundreds of heart urchins, which are related to sand dollars,” she says. “But they look like popcorn when washed ashore.”

She encourages beachcombers to look past the lure of sand dollars and Scotch bonnets and to consider the beauty of more common species, too. Take a plebeian oyster shell, for instance. Many would toss it aside. But, Terri notes, you might be throwing back a 12,000-year-old fossil. “Most oysters do not live in the ocean. They do better in lower salinity,” she says. “But as the barrier islands move, they’re uncovering oyster shells. So the lowly oyster shell that everybody thinks, ‘Ah, it’s just an oyster shell,’ is really a fossil just lying out there on the beach that nobody thinks is cool except for me — and now you, she says, laughing.

In less than an hour, Darryl, Buxton, and I have found nine sand dollars, which Darryl carefully wraps in paper towels and stores in a complimentary blue “Marsh Cruises” bag. We board his skiff again and putt putt away from the shoals, where a boat carrying a single angler has run aground and is being pulled by a rescue squad. “Great winter drum fishing out here,” Darryl says. Beyond those shoals, the water darkens as it flows into the open Atlantic.

Our last stop before heading back to Dudley’s Marina is a narrow stretch of beach on a tiny island just past the Hammocks Beach ferry landing. Maybe 100 yards long, it’s Darryl’s place to find fossilized shark teeth. The hunt thrills his youngest passengers, many of whom, by this point in the trip, are ready to be off his skiff and back on land.

Buxton leaps off the boat and tears down the shoreline, and we set to hunting. “Look for little pointy black shapes,” Darryl says, eyes scanning the sand. “There,” he says. “You see?”

But I don’t. He draws a circle in the sand, but all I see are broken shells reflecting the late afternoon sun. Darryl bends down and plucks off the ground a tiny ebony triangle no bigger than a fingernail: a fossilized shark tooth, dropped on the ocean floor possibly tens of thousands of years ago, and deposited onto this beach at the whim of a vacillating Atlantic tide. He rubs the tooth between his fingers to clean off the sand and hands it to me.

“See?” he says, and smiles. “Now you know what to look for.” The water laps at my feet, and I keep searching.

For a shelling tour with Marsh Cruises, call (910) 330-8750 or book online at
marshcruises.com/cruises-tours.