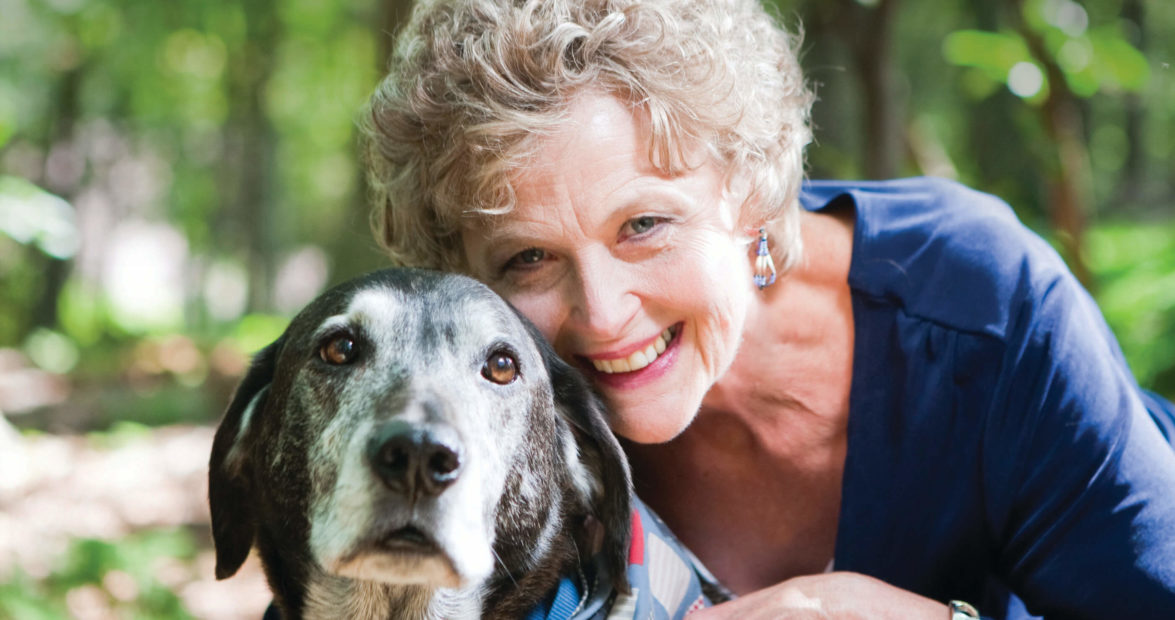 Libby Bagby is a retired teacher. And she does love her dog.

She calls him Low Gap Lucky, Lucky for short, and over the past three years, she’s taken him to schools and libraries across the state. She wants to tell everyone about her hound.

And always, Lucky comes along.

From the Editor’s Desk:

Last year, while at the Best of Our State at the Grove Park Inn, Our State subscriber and event attendee Vicki Byrd, took some time to speak to me about a story idea she thought would be perfect for the magazine.

As I listened to Vicki tell me about Libby Bagby and her Plott hound, Lucky, I knew she was right.

I knew our readers would love hearing the story about this remarkable woman and her rescue of a most remarkable dog, and we were excited to send one of our favorite writers, Jeri Rowe, to spend the day with Libby and Lucky. The result is a beautiful portrait about the kindness of humans, and the connection we have with our animals, We are so proud to publish a piece that brings recognition to Libby’s work and to the importance of this dog breed to North Carolina’s heritage.

Many of our favorite stories in Our State have come from reader suggestions, and we always try to encourage folks to share their ideas with us. If you have a story you want to tell us about, we’d love to hear it! To submit your story idea, simply click here. Your message will be sent to our editorial team and we look forward to receiving it.

Bagby will talk for at least an hour, unfolding facts about history, geography, and literature. She’ll sing and tell stories, too, gathering everyone around her so they can hear, especially when she explains Lucky’s bark.

She loves to watch people jump.

She brings all kinds of props. “My weird gifts,” she calls them. A raccoon skull. A bear skin. A cow horn. And a boar skull — a gift from a hunter named Scrubby Rogers.

But mostly, she brings knowledge. For at least the past six years, she’s canvassed nine states and interviewed nearly 100 people, filling at least 30 cassettes with tales about their dogs.

She’s searched for them because of what Lucky is: a Plott hound, the state dog of North Carolina. It’s a little-known breed, a hunting dog that has helped make Bagby a writer, a speaker, and a woman unafraid.

There was a time when Bagby didn’t like hunters or hunting — let alone going on a hunt with men armed with guns and a pack of hounds.

But today, Bagby likes nothing better than setting a tape recorder by her elbow and asking someone to tell a story about some Plott hound named Battle Cry.

Or telling a crowd of children about the valley-rattling bark of a Plott named Old Thunderer and how he chased a bear for miles in western North Carolina, across the range of mountains that share the Plott hound’s name.

Or standing tall in her jeans and hiking boots, this tiny woman raised in Hickory and citified in Charlotte. She sees a Plott hound stand in the back of a pickup — stiff-legged and tail out — howling over the earthy scent of a bear, and she feels chills race up her spine.

Her journey into all things Plott taught her tolerance and helped her understand a hunter’s passion, the poetry of the woods, and the need to persevere in pursuing primary sources of information, wherever it may lead.

Along the way, she’s become an ambassador for North Carolina’s state dog.

It’s quite the accomplishment. But consider this: It never would’ve happened without that freezing afternoon eight years ago, an afternoon that changed her life.

It’s January 25, 2002, a Friday. Bagby is driving home after a week at North Surry High School, where she works as a media specialist in the library. She spots a black trash bag alongside N.C. Highway 89.

Or so she thinks.

When she gets closer, she sees it’s an animal, a dog. And it’s not moving.

She drives by, glances in her rearview mirror, and sees the dog raise its head. The dog stares right at her.

Bagby keeps going, but not for long.

She doesn’t listen. A quarter-mile later, she turns around and finds the black dog, lying a foot from the road in a curve. Bagby knocks on doors nearby to see if she can find an owner.

She finds nothing. Then, she calls her husband Rick.

Rick, a real estate appraiser, is at the grocery store 20 minutes away in Mount Airy. He knows the terrain of his wife’s heart. She once picked up a cat in the middle of the road and adopted a dog that wandered up to their house.

Still, he shakes his head.

Libby drives to their home 10 minutes away and picks up a leash, a blanket, and a pair of gloves. When she returns, Rick is there. She knocks on more doors. This time, she finds a young woman willing to help.

“I used to help my dad take cows across the road,” the woman tells her.

Then, the two women stop traffic. The first car they run into is an off-duty deputy sheriff. He calls an animal control officer, who arrives and gives Rick the news.

“If we take him,” the animal control officer says, “we’ll have to put him down.”

Rick knows that won’t work. So with the help of two other men, he places the dog in the blanket and carries him to his pickup. The dog growls.

Libby and Rick take the dog to their local veterinarian. The diagnosis: two broken back legs. They spend $1,000 to keep the dog alive. In a week, they decide to adopt him and bring him home.

“Poor baby,” Libby says to herself. “We’ve got to keep you alive.”

The dog gets better, and she names him Low Gap Lucky — Low Gap for where she found him and Lucky for how he fared after lying there for at least two days before that Friday afternoon.

Then comes the surprise from one of Bagby’s friends, Linda.

“Do you know what kind of dog you have?” Linda asks.

“Yeah,” Bagby responds. “An expensive one.”

“Libby, you’ve got a Plott hound,” she says.

Bagby, the teacher, the educator with 30 years of experience in a classroom, doesn’t say a word.

A Plott hound, she thinks. What is that?

The lessons of Lucky

Bagby didn’t stay speechless for long. She began researching. And the more she found out, the more enthralled she became with a breed state legislators approved as North Carolina’s state dog in 1989.

She found out the Plott hound first appeared in North Carolina in the early 1880s, bred by a man named Henry Plott. The breed was considered tireless, loyal, and gentle with children — qualities legislators admired.

Plott hounds were the dogs of North Carolina’s pioneers, the rugged folk of the mountains who survived on their instincts, hunted for food, and depended on a breed seen as the Daniel Boone of the dog world.

But Bagby realized many North Carolinians had no clue about all that heritage. So, when she retired in 2005, she started her own project: tracing the history of the Plott.

Her search took her to Redmond, Washington, three blocks from the headquarters of Microsoft Corporation. And there, she found an old hunter and Plott hound owner named Frank Methven.

She spent three days with him and learned, as she says today, to “talk Plott.” She interviewed Methven, recorded everything he said, and pored through his books that documented his dogs and his hunts.

The books were as meticulous, as detailed as any family’s baby book. And when she came home, she received a gift: three apple boxes from Methven, containing all of his Plott hound books.

Bagby was dumbfounded. Those packages would’ve cost $80 to mail, and she offered to pay Methven. He said no.

She started bird-dogging Plott hound owners in Michigan, Wisconsin, and Washington, as well as six states spanning the midsection of the South. She recorded every interview, capturing stories about the “storied bear dog.”

In 2007, she began her own public awareness campaign and started visiting schools with Lucky. She has driven to 30 counties, logging 50,000 miles on her blue Toyota Prius in two years.

The license plate? LKYPLOTT. Her wardrobe? Paw-print earrings, a paw-print necklace, and a white polo shirt with the phrase across her shoulders, “Ask me about North Carolina’s state dog.”

Now she has a website. She also has memories of two bear hunts, which happened in Ontonagon, Michigan, in the remote spot Michigan residents call the Upper Peninsula. Bear hunter and Plott hound owner Bud Lyon invited her.

“Libby, if hunters are going to acknowledge you, you need to at least experience it,” he told her.

She did. And right there, surrounded by Plott hounds, she made a discovery.

“The total irony of it all is that I’ve never hunted, and I didn’t like it,” she says from her home, a log cabin on top of a mountain in Roaring Gap. “When Rick and I lived in Low Gap, we’d keep hunters off our land by posting ‘No Hunting’ signs.

“[Hunting with Bud] was a lesson, a lesson in tolerance, to learn about good hunters, and respect the sacrifices they have to make. I don’t like to see anything hurt, but I know it’s the circle of life.”

Sit in her den, and the ripple effect of finding Lucky is everywhere.

There’s the boar skull on the kitchen table and the apple boxes in a window, full of books, documents, photos, and breeding records of a family’s Plott hound that trace back for generations.

A stack of letters from schoolchildren sits nearby. The collection includes one from Mrs. Foster’s fourth-grade class at Shiloh Elementary in Union County. It’s 11 sentences on two laminated poster boards three feet high.

The students addressed their letter to Lucky.

They wrote: “It was like there really was an angel by your side. What a lucky Plott hound you are. You have a new home.”

“What is your favorite thing to do with Lucky?”

“What has happened to your other dogs?”

“They’ve gone to heaven,” she says.

“Only two-legged mammals,” she says.

“Yes,” she responds. “He hunts you to teach you about the state breed.”

So it goes, with every class.

But in the quiet of her log cabin house, listen to the taped interview of Frank Methven, the man Bagby calls “my Plott hound daddy.” The voice is scratchy, but passion is in the words written by an old hunter.

He talks about the “scarlet eve of memory,” “the voices of ancestral blood,” and the bawl of the “storied bear dog.”

“When it came to running and treeing a bear, they were more than okeydokey,” he said into Bagby’s tape recorder. “They were unmatchable.”

Ask Bagby about a hunter’s passion and her own journey, and she stops. Her voice catches, and her hands curl around her coffee mug, the one with the inscription, “Lord, Help Me To Be The Kind of Person My Dog Thinks I Am.”

Bagby waits a few seconds, then she tries to explain.

“When you’re a teacher, you want to do it right, and I knew nothing, and I felt very inadequate when a person came up to me, talking Plott,” she says. “I wanted to talk to him.

“But along the way, I learned to dream as big as you can dream. That’s what I tell children. If I can do this, anyone can do this. The good Lord brought me Lucky.”