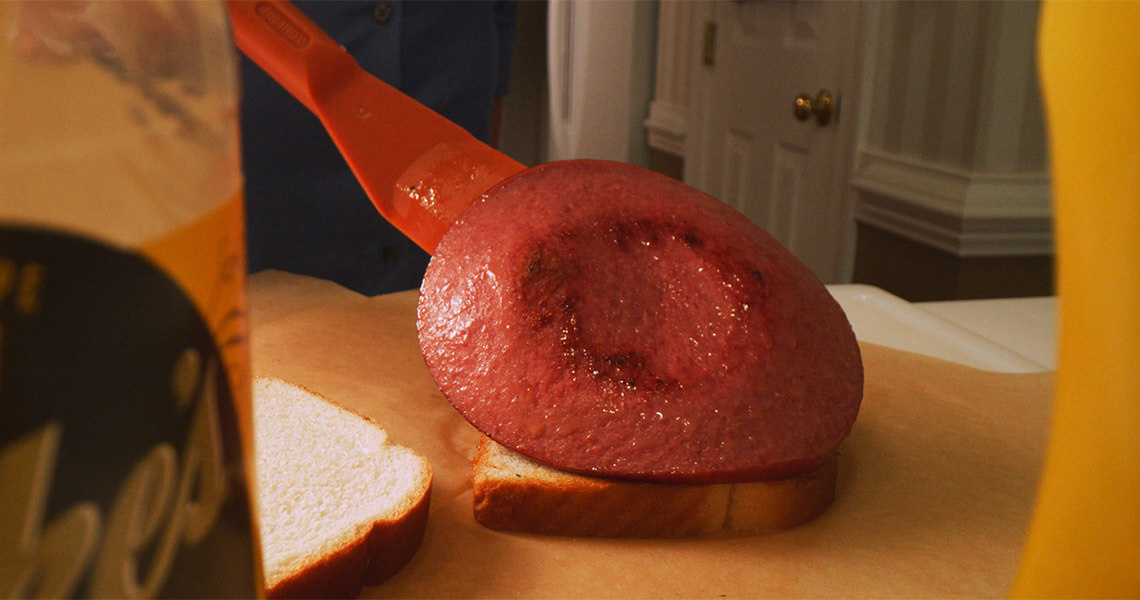 The best fried bologna sandwich I’ve ever made was an accident. The deli attendant at the grocery store cut the meat much thicker than I’d asked for, but fried bologna is one of my husband Chip’s favorite sandwiches, so I decided that I’d surprise him with a grand concoction for dinner.

When you order a fried bologna sandwich at a general store or lunch counter, fry cooks often make half-inch cuts around the edges of the slice to keep it from curling into a sombrero-like shape when it’s cooked. This slice was so thick, I didn’t even have to cut it.

I heated the cast-iron skillet until it was almost smoking and placed the bologna onto the scalding surface. When fatty meat with that many spices hits a hot skillet, the aroma is divine. After about a minute, I turned down the heat and flipped over the bologna. After another minute or two, a perfect char formed a border around the slice. I toasted two slices of rye bread — Chip’s favorite — and topped each one with Duke’s mayonnaise and American cheese. I also might have added a thick slice of a Cherokee Purple tomato from Stan Beam’s farm in Cherryville. I plated the monstrous sandwich, put it in front of my husband, and waited for his reaction. He couldn’t contain his surprise: With more expression than I’ve seen in years, he said, “Good Lord! Now that’s a bologna sandwich!”

We’d both grown up with bologna sandwiches, but nothing that fancy. My own introduction to bologna was in the lunchroom at Claxton Elementary School in Greensboro. I often bought lunch from the cafeteria, but on special days, Mom would send me to school with a homemade meal. She always bought Oscar Mayer bologna — I remember the yellow-and-red package with red bands around each slice — and either Wonder Bread or Merita. Her recipe is a classic: two slices of fresh white bread, two or three slices of bologna, a slice or two of American cheese, and yellow mustard (Duke’s optional). While I was in class, the thermos of cold juice inside my metal Partridge Family lunch box kept the sandwich cool until the bell rang and I took my seat in the cafeteria.

Meanwhile, Chip’s mom, Nancy Wells, a Monroe native and schoolteacher, made sandwiches frequently for her two growing boys. Every summer, the whole family would head down to Carteret County, where the boys would fish in the surf at Harkers Island and explore the seafood scenes in Atlantic Beach and Morehead City. Just after our wedding in 1986, I got a taste of Chip’s childhood summers at the Crystal Coast. We joined his parents on their annual vacation to The Atlantis Lodge in Pine Knoll Shores as a sort of honeymoon. Nancy and I read on the beach while the men fished, as Chip had done as a kid. At lunch, Nancy prepared the sandwiches he’d loved growing up. Pimento cheese and bologna with bread-and-butter pickles on white bread; turkey, ham, Swiss, tomato, pickles, and pickled okra on rye; and a Wells family staple — roll-ups made of thick-sliced bologna stuffed with cottage cheese or whatever else was on hand. I’ll admit, these combinations were a bit strange to me, but my husband couldn’t have been happier to taste bologna at the beach again.

As a personal chef, I spend my days creating and customizing menus and recipes using locally grown produce or locally raised meat for my clients. I can’t say that I’ve ever gotten a request for a bologna sandwich in my years as a private chef — at least, not from the people I cook for whom I don’t live with. On the weekends, I enjoy experimenting with different flavors folded into my finds from the farmers markets in Greensboro and, occasionally, happy accidents from the deli counter. But I know that Chip would be just as happy having a simple bologna sandwich. I’ll make both with love.

Related: Check out these restaurants that serve up classic fried bologna sandwiches.