When Josh DeCarolis was 3 years old, his Italian grandmother plopped him into a chair and figured out exactly how to get him to sit still: She let him entertain himself by rolling out pasta dough. Fettuccine, ravioli — food was the love language that his family spoke to one another, and there was plenty to go around.

Every weeknight, the family sat down together for a home-cooked dinner, and every Sunday, they visited DeCarolis’s great-aunt Kay. In Aunt Kay’s warm little kitchen, DeCarolis and his brother learned to form her famous meatballs. Later in the day, when the scent and the pop of the garlic was a mellow memory in the air, the brothers ate the meatballs stuffed into sandwiches as they crowded with uncles and friends around the too-small kitchen table, talking sports. “[Aunt Kay] was like a second mother to me and another grandmother to [the kids],” says DeCarolis’s mom, Cindy. “She always listened, and she never judged.”

Kay, who passed away nearly 15 years ago, wasn’t technically a mother. But the nurturing acceptance that she bestowed on the nieces and nephews who adored her made her seem like one. No one was turned away from Kay’s kitchen, and everyone who ate there was family, or felt like it. 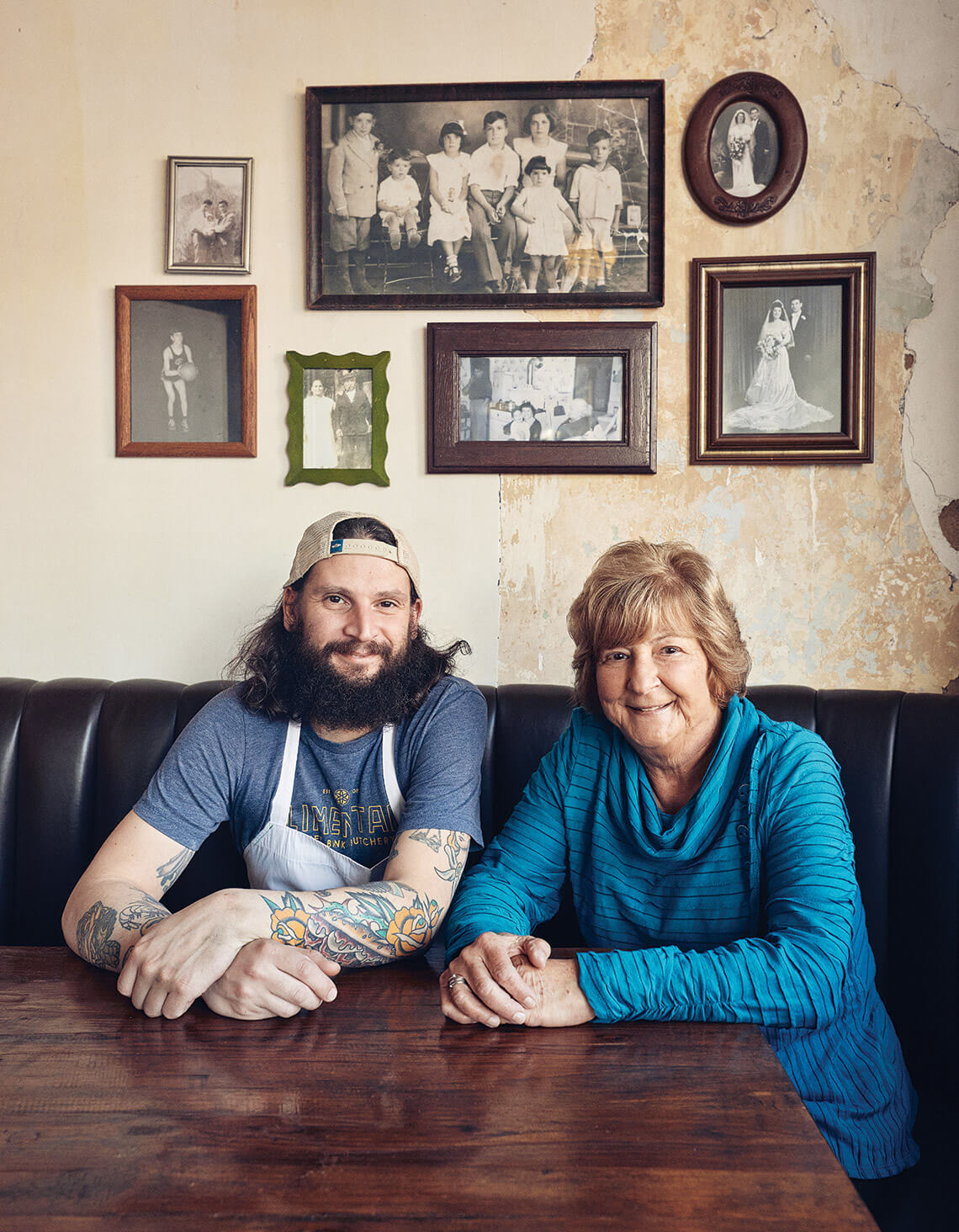 Photographs of Josh and Cindy DeCarolis’s family hang on the walls at Mothers & Sons, whose name is a nod to the special bonds often forged over food. photograph by Alex Boerner

It’s that feeling of being with family, smushed into Aunt Kay’s kitchen full of good aromas and laughter, that DeCarolis hopes to capture at his upscale Durham trattoria, Mothers & Sons. In the front of the house, diners sit on comfy chairs surrounded by old family photos of mothers and women who, like Aunt Kay, loved just as hard. That warm sense of inclusion is present in the back, too, where a team of mostly single moms keeps the kitchen running smoothly. It’s these unseen mothers, who give so generously and serve so loyally, whom DeCarolis honors alongside his own matriarchs with his cooking. Like DeCarolis’s family before him, his employees work to build their own legacies, to leave their children with a little more opportunity than they had.

A tile that once hung in Aunt Kay’s house is now embedded in the very wall of the Mothers & Sons kitchen. Sous Chef Samantha Greene gestures to the tile, a reminder of a woman whom the staff never knew but whose maternal love helped nurture a calling to serve others through food. “That’s why we do what we do,” Greene says.

At around 13 years old, DeCarolis got his first job as a dishwasher. Fairy tales warn us that bread crumbs make unreliable paths, but DeCarolis wanted no other road. Soon, he was off to culinary school, then what his parents jokingly refer to as “pasta school” in Bologna, Italy, where an exacting “maestro” schooled him in the techniques of fatto a mano — made by hand — pasta, mastered by great-grannies in Italy and just a handful of U.S.-based chefs.

Want the recipe? It’s simple. Crack 200 eggs into 22 pounds of flour, then blend the mixture with the tines of a fork in the sfumato style, as if you were painting the shadowy shoulder of the Mona Lisa. Roll out the dough with a mattarello, or pasta rolling pin, until you can hold it up to the light and see the shadow of your hand.

“You’d say, ‘Well, why the hell would you do that if you could just get a machine and put it through the sheeter?’” DeCarolis says. “I’m probably one of half a dozen people in the country making pasta like that.” 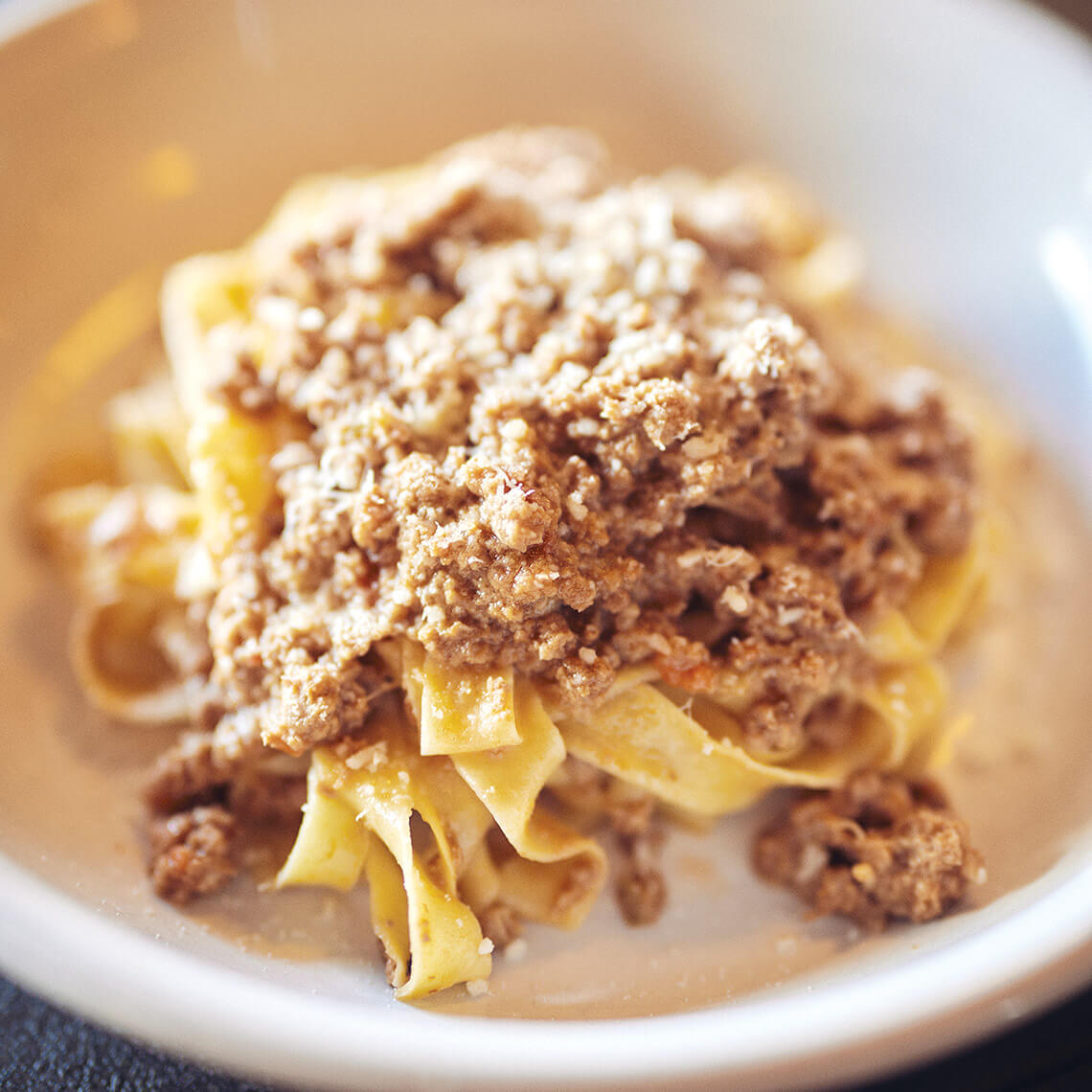 But heavy metal sheeters press the pasta out too smoothly, while making it a mano with a wooden pin maintains the complex structure of air bubbles and tiny divots — “character,” DeCarolis calls it — with the purpose of helping more delicious sauce cling to it.

And DeCarolis doesn’t mind hard work. Southern Italy was historically poor, and home cooks made do with what they could find. His grandparents toiled in factories, making springs and ball bearings so that his parents could have more opportunities. But out of that poverty came resourcefulness, imagination, and creativity. The sacrifices of each generation enabled the successes of the next, which were then savored by the whole family like a rich ragù.