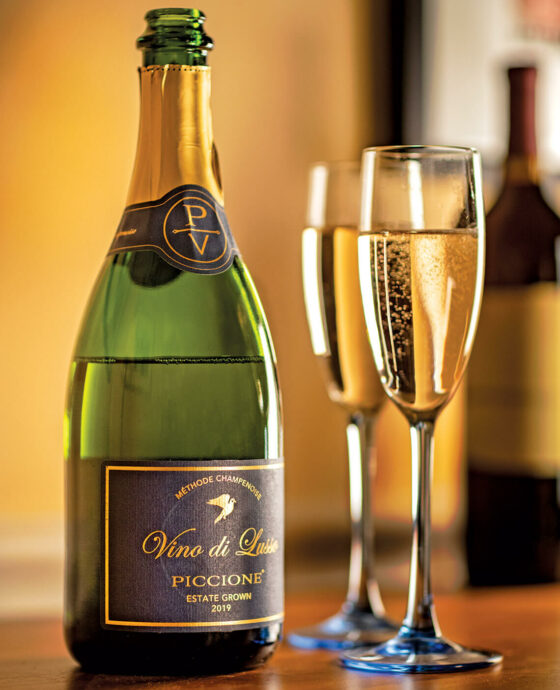 In the foothills of the Brushy Mountains, in a Wilkes County valley that moonshiners once called home, Piccione Vineyards has sunk Italian family roots deep into mineral-rich soils. Below a hillside patio surrounded by roses are row upon row of manicured vines feeding Pinot Grigio, Vermentino, Montepulciano, and Sangiovese grapes. Beyond that are the breathtaking Blue Ridge Mountains, one of the oldest ranges in the world.

A recent addition to Piccione Vineyards’ portfolio is Vino di Lusso, which earned the top spot in the Drink category of Our State’s 2021 Made in NC Awards. “We wanted to make a handcrafted product from our Chardonnay [grapes],” says Manager Hailey Klepcyk, noting Italy’s long tradition of producing sparkling wines. Piccione hopes that Vino di Lusso will find a favored niche in its pantheon of Italian-style wines that conjure the romance of Puglia, Veneto, Abruzzo, and Tuscany.

Planted in 2015, Piccione Vineyards is a relative newcomer to the North Carolina wine scene. But its Italian American owner, cardiovascular surgeon William Piccione, is hardly a newcomer to wine. His vineyard is part of a century-old family tradition that stretches back to 1921, when his Sicilian grandfather Giuseppe left Italy, boarded a steamship to Ellis Island, and settled in Brooklyn, New York, where he worked in the garment industry. In his spare time, Giuseppe dabbled in home winemaking, as was the custom with many new European arrivals. His Old World handpress, the small oak barrels, the manual bottling machine — all of these are part of la nostra storia, the family history, that’s etched into William Piccione’s memory. 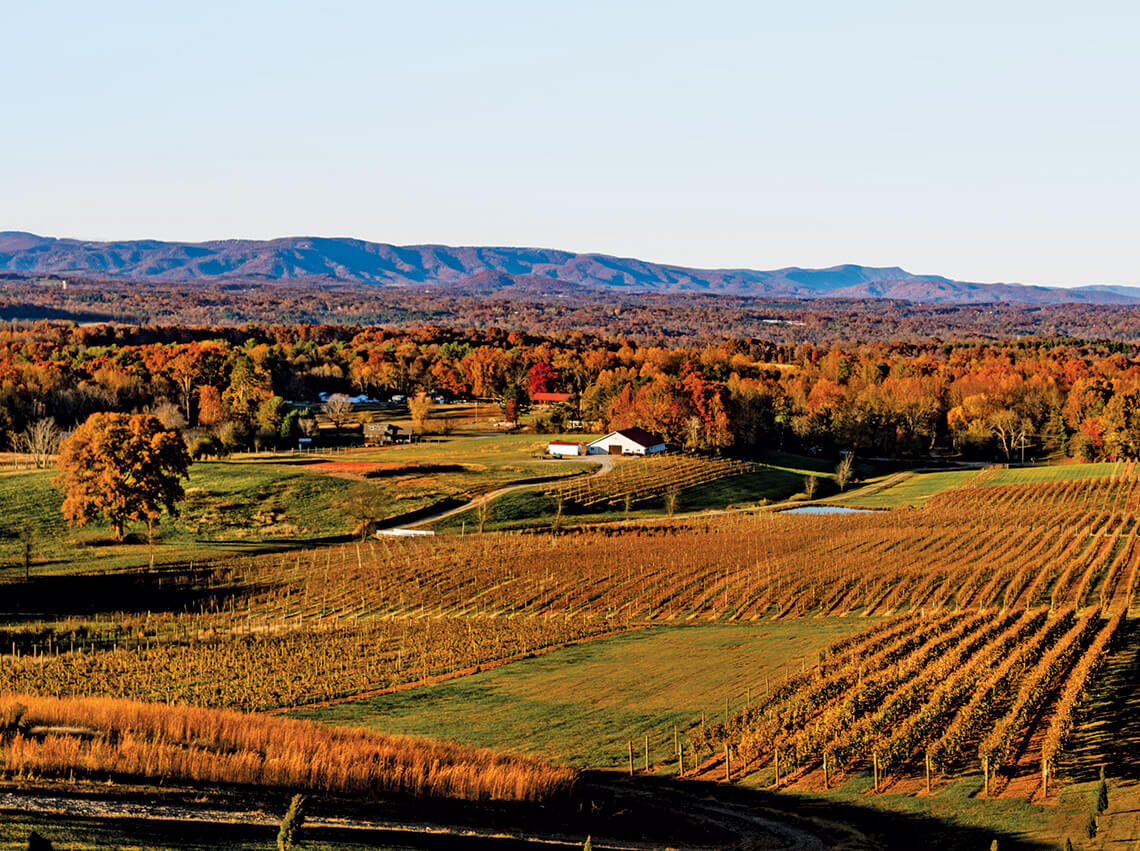 William Piccione grows Italian and French grapes in a sprawling, picturesque valley surrounded by the Brushy and Blue Ridge mountains. The grapes are hand-picked, and the wines handcrafted in the dry style. photograph by Charles Harris

Today, that winemaking tradition continues at his 100-acre estate that boasts 30 acres in vine. William and his two sons, Billy and Steven, have already begun expansion plans, aware that additional wineries in the area are just a few years away.

Piccione Vineyards is situated in Swan Creek, a federally designated wine subregion that’s set into a larger federally recognized wine region, the Yadkin Valley. Such federal designations speak to the unique geography, topography, and climate that inform a region’s grape-growing. The sloping land invites abundant sunshine. The mountain ranges limit rain and storms approaching from the west. And the Yadkin and Catawba rivers mitigate high temperatures. Those rivers and the gaps in the mountains encourage steady breezes that dry the moisture in the vines, preventing fungus and rot. And the soil is a combination of loam, mica, and schist — the products of eons of elevation degrading and settling in the valley. As such, it drains well, which is a godsend for any grape grower.

Piccione Vineyards is a key puzzle piece in an emerging wine mecca: Swan Creek represents the largest cluster of vineyards and wineries — seven within a two- to 10-minute drive — in North Carolina. Several more vineyard-wineries are under construction there, but already, the intersection of Interstate 77 and U.S. Highway 421 is a destination for visitors from across the Southeast — customers who are apt to enjoy Piccione’s line of wines, including its newest addition.

With Vino di Lusso, Piccione wanted to elevate its inaugural sparkling wine, crafting it in a French style called méthode champenoise, a labor-intensive, time-consuming process that sees a second fermentation inside each bottle. The wine is made from Chardonnay grapes, which are grown at vineyards worldwide and commonly leveraged for sparkling wines. At Piccione, the fruit was harvested two to three weeks earlier than normal to preserve the tart acidity necessary in great sparklers.

And what is the méthode champenoise? In any first fermentation, yeasts devour grape sugars, throwing off carbon dioxide and alcohol. But in a second fermentation, bottles of still wine are inoculated with more yeast and a carefully calibrated amount of sugar — the liqueur de tirage. The wine is aged, sediment is removed, and a small amount of sugar, or dosage, is added before final corking. But this time, the expelled carbon dioxide from the second fermentation is trapped inside the bottle — hence the bubbles when opened and poured. 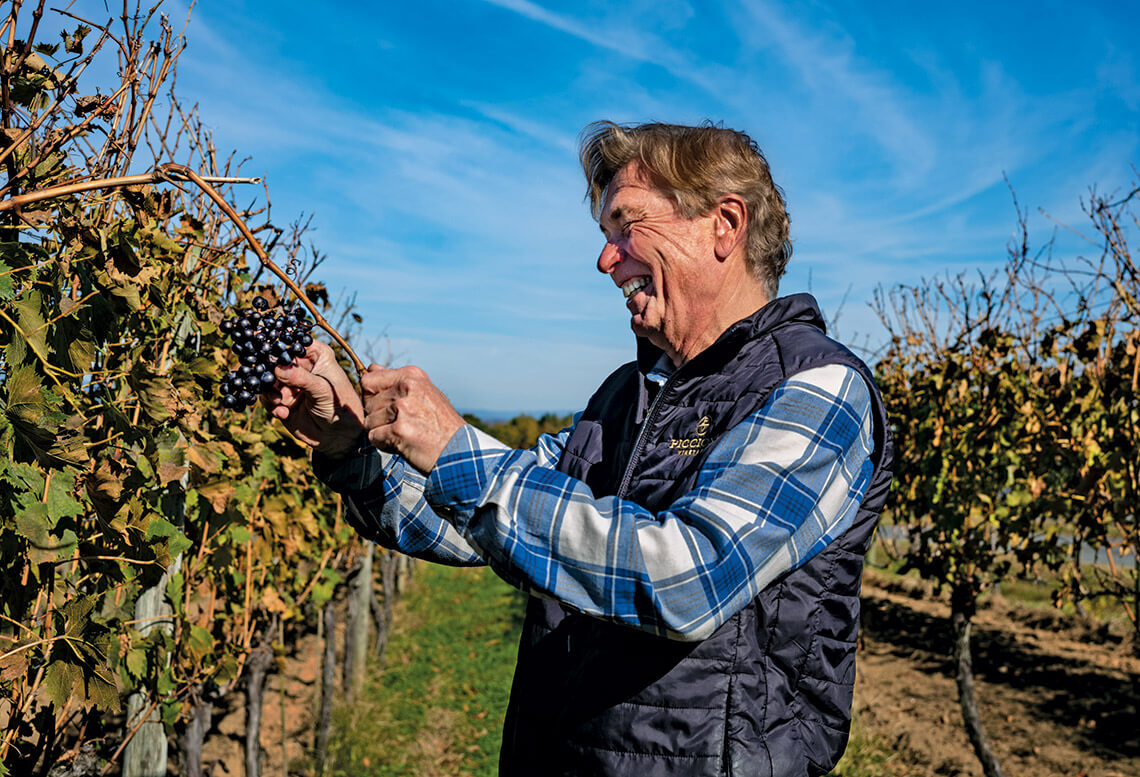 Piccione Vineyards is a family affair. William Piccione tends to the grapes while one son, Billy, is in charge of business development and another, Steven, heads up marketing and operations. photograph by Charles Harris

To produce this sparkler, Piccione turned to Mark Friszolowski, winemaker at Childress Vineyards in Lexington. As a custom-crush specialist for about 50 boutique wineries across the state, Friszolowski’s meticulous approach to the craft was well known to the folks at Piccione. Friszolowski describes the wine as a classic dry sparkler, crisp and clean, with aromas of toast and hints of pear, green apple, and lemon. Sparkling wine, particularly when done in the traditional French method, offers special challenges but sublime rewards. “You have to anticipate what this will be two years out. You can’t have too much dosage — or too little,” Friszolowski says, explaining the delicate balance among the acids, yeasts, and sugar.

Being a doctor, Williams Piccione’s favorite Italian wine toast is In vino, salute: “In wine is health.” And the health of Piccione Vineyards seems assured. The young vines, first harvested in 2013, will mature, their roots sinking deeper and deeper in search of nutrients.

Thirty more acres are to be added, perhaps with new grape varieties. A winemaking facility is planned on-site, along with a new tasting room. And just down the road, more wineries and vineyards will open, adding to Swan Creek’s allure. In years to come, the maturing wines will take on additional nuance and complexity.