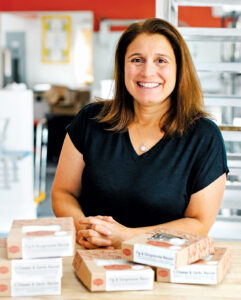 What Carmella Alvaro Reamer remembers most about her childhood family dinner table are the flavors and fragrances. As a first-generation Italian American, she was surrounded by lively table banter and multicourse meals rooted in the Southern Italian tradition. Her parents, Giuseppa and Giuseppe, prepared each dish with ingredients fresh from the family garden: a red sauce made from plump tomatoes, crunchy zucchini blossom fritters, cheesy zucchini Parmesan, and salty home-cured salami, all washed down with the strong kick of Giuseppe’s homemade red wine. “We never went out to eat at restaurants,” Carmella says. “Everything was homemade.”

Like many children of immigrants, Carmella didn’t fully grasp then how much her family’s cultural and culinary imprint would shape her life. But the strong connection between family and food took root, and, as owner of Melina’s Fresh Pasta in Durham, she now helps Triangle-area families enjoy authentic Italian meals in their own homes. Drawing on the home-cooked meals of her youth, Carmella replicates offerings passed down from generations of Alvaros, and also invents new combinations of flavors and ingredients inspired by her life in the South. In a nod to both her ancestral homeland and her adopted home state of North Carolina, she created the signature pimento cheese ravioli that won Our State’s 2021 Made in NC Award in the food category.

On a Monday morning, Carmella is inside her shop, packaging wholesale orders and ordering ricotta impastata, durum wheat flour, and other ingredients that she uses at Melina’s. Located in Durham’s Lakewood neighborhood, the store, which she opened in 2017, looks like a cozy bungalow from the street, with its red-and-white-striped awnings. The scent of garlic is detectable even before you step inside. It’s here that Carmella and her crew crank out a dizzying array of fresh ravioli, gnocchi, sauces, and prepared meals. Their use of fresh ingredients has garnered a loyal following of customers who snap up Melina’s authentic Italian fare at the Triangle’s Weaver Street Market locations, and at farmers markets in Carrboro, Chapel Hill, Durham, Hillsborough, and Raleigh.

Carmella’s most popular ravioli flavors are fig and Gorgonzola, spinach and cheese, pierogi Asiago rosemary, and lemon ricotta. “We offer many of the traditional flavors, but, being in the South, I’m also inspired by what’s local,” she says. “We’ve done country ham and collards ravioli, and sweet corn and mascarpone. We also do a Utica greens ravioli in honor of my Upstate New York connections.”

Carmella’s path from her family’s spirited dinner table to a pasta shop in the Triangle was circuitous. Born and raised near Syracuse, New York, she studied political science at Colgate University and later landed corporate and nonprofit jobs in Washington, D.C., and Durham, where she did remote sales for a software company. The job gradually became less than fulfilling, and Carmella began to think about pursuing a more meaningful and rewarding career. Since arriving in North Carolina, she’d noticed a paucity of authentic Italian fare. So, seeking a reconnection to her homeland, she booked a trip to Bologna, Italy, to take pasta-making classes. Once she arrived and explained her lineage and motivations for signing up, the instructors took her under their wings, teaching her time-honored techniques for egg pasta, tortellini, lasagna Bolognese, and other classics. During her stay, the elderly woman from whom she rented a room learned why Carmella was there, and gifted her a hand-turned wood mattarello, or pasta-rolling pin, that today hangs in a place of honor inside Melina’s Fresh Pasta. 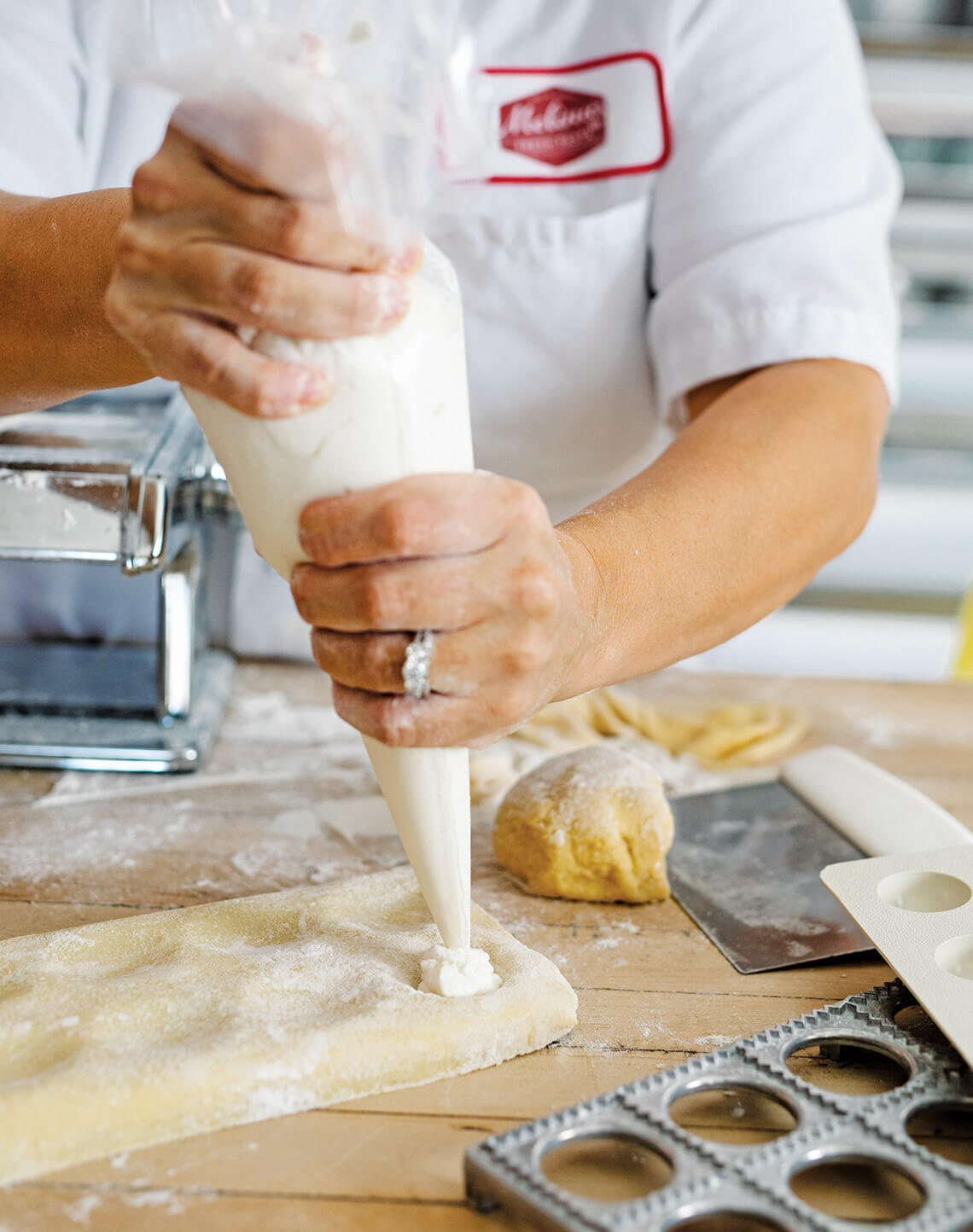 Carmella uses a pastry bag to gently squirt cheese fillings into her ravioli before boxing them up and shipping them out. photograph by Anna Routh Barzin

When Carmella returned to the States, she kept her sales job but began putting her newfound skills to the test. Working out of her home in 2010, she produced small batches of ravioli to sell at farmers markets. The delicious creations that took hours to make wound up selling out in minutes. Seven years later, she moved production out of her detached two-car garage and into her current storefront on Chapel Hill Road. She began offering pasta-making classes and joined a growing Italian American community in the Triangle that launched the annual Festa Italiana Raleigh, now held each September.

When Covid-19 shuttered many businesses, Carmella feared that demand for fresh pasta would plummet. The opposite happened. People began cooking at home more often, seeking appetizing alternatives to frozen fare and cookie-cutter takeout. “We never slowed down,” she says.

Carmella has been strategic about forging partnerships with area vendors and suppliers, favoring those whose aesthetic aligns with hers. She invited The Parlour ice cream shop to produce its tiramisu flavor year-round so that she could consistently offer it in her store. She sells imported EXAU olive oil produced by a third-generation Calabrian family. And she uses the sweet Italian sausage made by Durham’s women-owned Firsthand Foods for Melina’s popular take-and-bake lasagna and spicy sausage sauce. 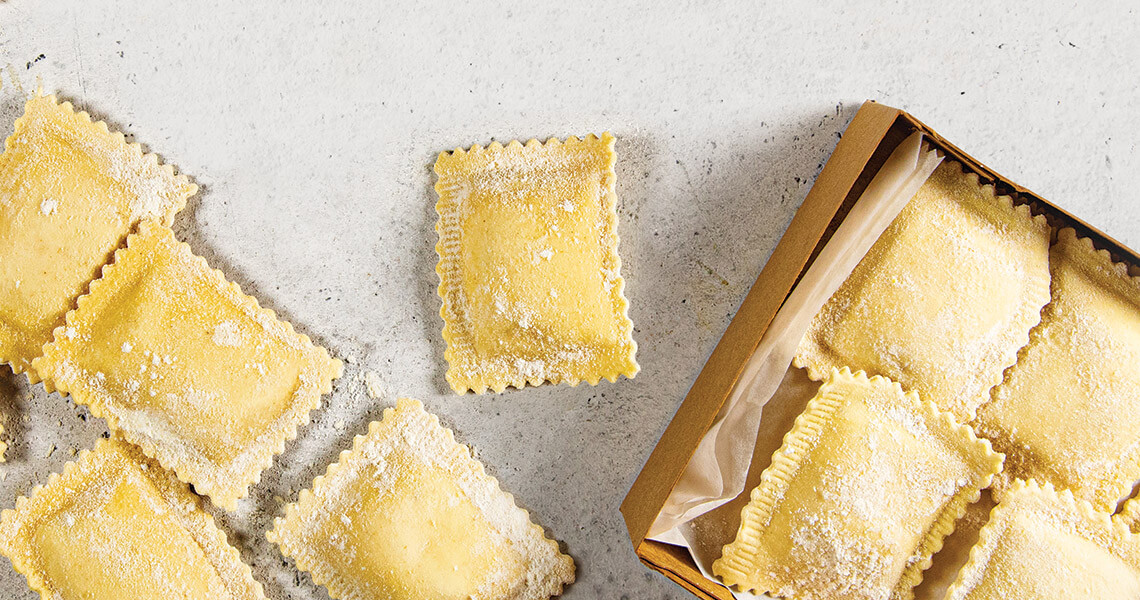 Open a box of Melina’s fresh ravioli, toss them in boiling water, add some salt, and — ecco qua! A fine Italian meal comes together in minutes. photograph by Anna Routh Barzin

Meanwhile, she’s quietly paying things forward for new waves of immigrants and refugees seeking opportunity and sanctuary on our shores. Through Church World Service, she met and hired a Syrian refugee — an accomplished chef in his home country — to work at the shop until he was able to learn English and land a cooking position at a local restaurant. He eventually opened his own restaurant.

Melina’s is a godsend for gourmands whose discriminating tastes exceed their ambitions in the kitchen. But for those ready to embark on their own Italian food-making journey, Carmella has published two cookbooks, Authentic Homemade Pasta: Recipes for Mastering Cut, Shaped, Stuffed, Extruded, and Flavored Pastas, and Homemade Ravioli Made Simple: 50 Mix-and-Match Recipes for the Best Filled Pastas.

When Carmella learned that her pimento cheese ravioli had won the top Made in NC Award, she felt a certain vindication. “Here in the South, people have very strong opinions about pimento cheese, so it wasn’t a top seller,” she says. “But I kept making it because it’s one of my favorites.”

Running a bustling business is a 24/7 job, yet Carmella also finds time to cook for family and friends, re-creating the joys and flavors of her childhood at her current home in North Carolina. She invites friends for bowls of pasta carbonara and platters of braciola in tomato sauce; for vegan friends, she’s adapted her sister’s recipe for caponata. “I love hosting my friends and cooking for my extended family,” she says. “Food and hospitality go hand in hand. Whether you’re an Italian American immigrant or a Southern grandmother, we show affection through food.”

Note: You can find Melina’s Fresh Pasta at their shop in Durham and at various Triangle-area farmers markets and specialty shops.