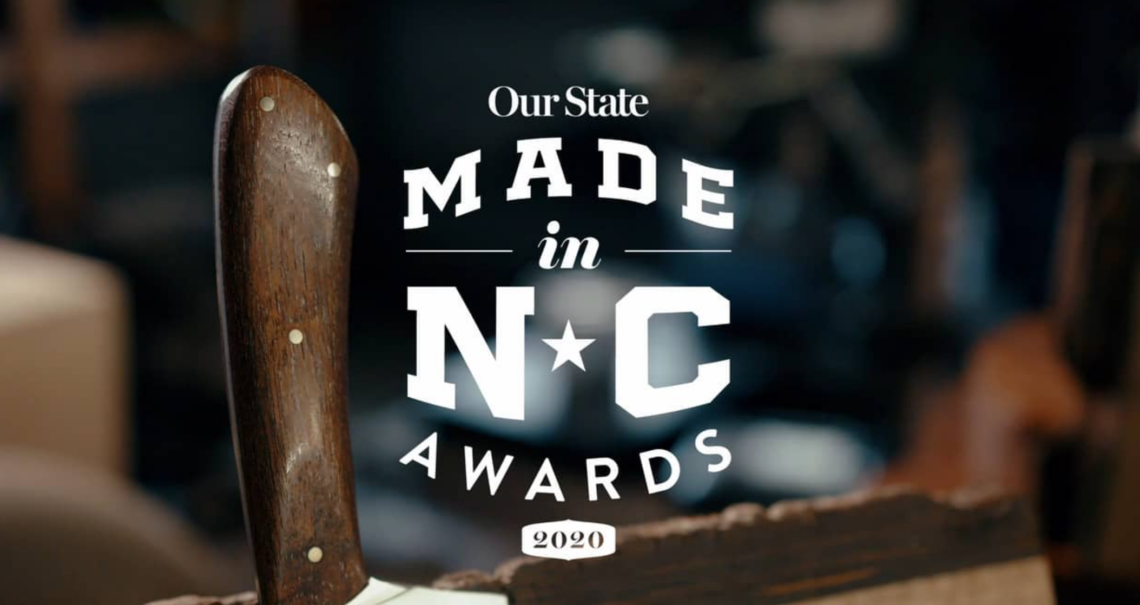 When Nicholas Nichols looks at the old, rough teak that will eventually become a smooth, reclaimed wood handle on one of his custom chef knives, he can’t help but feel it has a soul. Salvaged from the USS North Carolina when the battleship’s deck was replaced in the 1990s, each piece of teak, close to 100 years old, is part of history.

“You wonder what part of the ship this piece of wood was on, what battles it’s seen, what parts of the world it was in, where the sun shined down on it or where the rain came through — and it just comes to life,” Nichols says. “No piece of wood is the same.”

Nichols, a Leland native, began his journey in knifemaking after learning that his great- great-grandfather had been a blacksmith. Today, he crafts a variety of high-quality kitchen and everyday-carry knives that can be passed down from generation to generation, just like his family’s tradition. But for many customers, it’s his battleship knives that are especially meaningful.

“Whether you have a connection to the battleship because you lived here in Wilmington or because your great-grandfather served on that ship,” Nicholas says. “It just has a soul that passes on.”

Our State sat down with Nichols to learn more about his one-of-a-kind knives, and why there’s no better everyday item to invest in.

NN: It was a long journey. I started chasing it after my grandmother died — my family and I were all sitting around talking, and I found out that I had a great- great-grandfather that was a blacksmith. It led me down this long rabbit hole of trying to find out everything I could about him and about blacksmithing. And through blacksmithing, I became a knifemaker. From the time I was a Cub Scout through culinary school, I enjoyed knives. They’ve always been around, and I’ve always been fascinated with them. I never really could quite afford one when I was just a culinary student, so to now have the ability to put knives in people’s hands that are handmade and that they could pass along for generations is just a great thrill to me.

OS: How would you describe your style?

OS: What went into the process of making the award-winning Battleship Teak Large Chef Knife?

NN: It started out as a design in my head, and then it became a woodblock pattern. From that woodblock pattern, I traced it onto a piece of steel and then cut it out. I tried to turn it from an unusual metal to a hardened piece of metal, which is what makes a knife. You know, it doesn’t have a soul until it’s hard and it’ll hold an edge. Then I crafted the blade, and then I attached the teak from the battleship deck onto the handle. That’s how that knife came to life.

OS: Can you share the philosophy behind the materials you use?

NN: I try to use as much material that’s made in the United States as I can. I also try to use reclaimed handle wood materials, whether it’s the teak wood from the deck of the USS North Carolina, or wood from other battleships, or barrels that once held whiskey, or wood that was intended for Gibson guitars that just didn’t quite make the cut but still has a story. I also recently got a hold of some wood that was used in some famous stadiums and basketball courts.

OS: What’s your biggest challenge as a knifemaker?

NN: We live in a throwaway society. It’s so easy to order something from a big-box store online and have it delivered tomorrow, while the wait for something that I make and the cost of what I make may be substantially more than that throwaway item. But a knife that I’m going to give you, you can pass on from generation to generation, and it’ll be here long after you and I are gone. Why not have something that you’re going to be proud of, that you won’t have to replace?

OS: What do you love most about what you do?

NN: Seeing the joy in people’s faces and hearing the feedback of first-time customers telling me that it’s the greatest knife they’ve ever had and how much better it performs than what they’re used to. A kitchen knife is something that you’re going to use every day, and why not have something that means something to you or something that feels really good in your hand or something that has a story behind it?