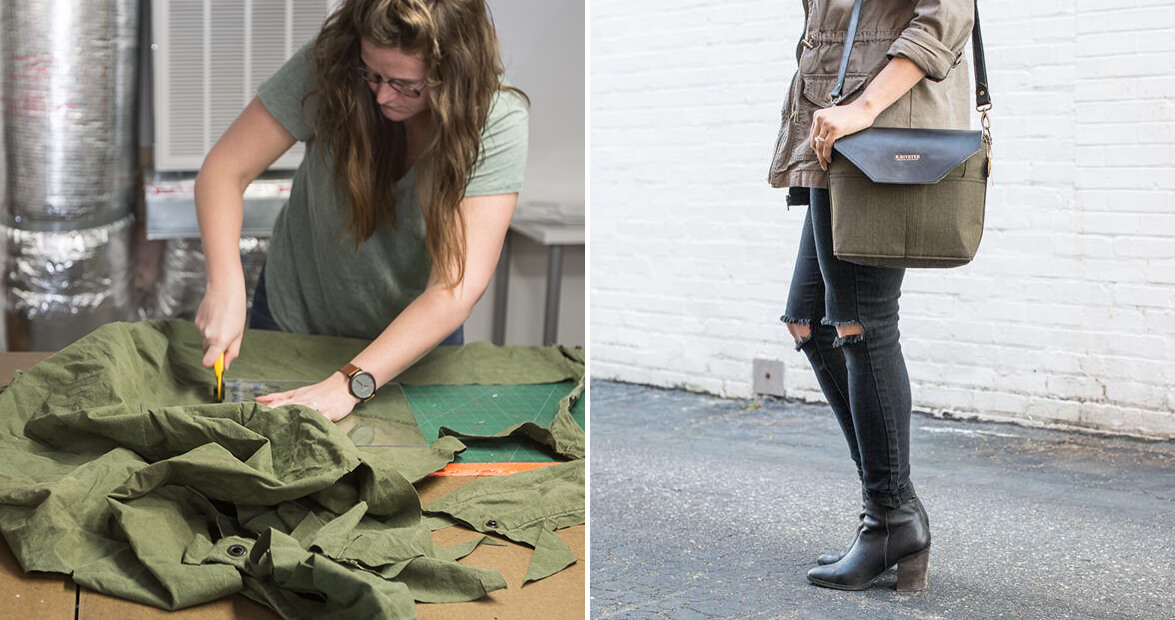 At first glance, you might assume that R. Riveter in Southern Pines is just another store that sells handbags and home goods. But the story behind R. Riveter doesn’t start with handbags, it starts with a mission – and that mission is to employ and empower military spouses all over the United States.

Military spouses are forced to uproot their lives every few years depending on where their loved one is stationed in the country, making it extremely difficult to maintain careers of their own. Lisa Bradley and Cameron Cruse, military spouses themselves, founded R. Riveter on the premise of wanting to create a new, innovative business model that would allow women like them to take their career with them wherever they go. They started making handbags out of recycled military materials, such as tents and retired uniforms, and began employing women across the country to help with the process. Soon enough, people started recognizing the quality of these bags; they’re handmade, stylish, durable, and timeless. In 2015, R. Riveter appeared on the popular television show Shark Tank, which landed them an investment deal that would make them even more successful than before.

Our State spoke with R. Riveter’s digital marketing manager, Kellie Gunderman, who knows what it’s like to have to quit jobs almost as quickly as they begin. In the 12 years she has been married to her military husband, she has lived in six states, so R. Riveter is a welcomed constant in her hectic life. Learn more about R. Riveter and the role North Carolina plays in the business in the full interview below.

Gunderman: The whole premise of our organization is to provide military spouses with portable employment opportunities. Our handbags are assembled and sold in North Carolina, but [their parts] actually made all over the country. A military spouse in Colorado might make the zippers, while another in Kansas might be sewing the canvas. And once all of the pieces make their way to our hub in North Carolina, they are assembled into the final product. So if a military spouse has to up and move in the middle of the year, she is able to take her job with her. It’s more of a mission than it is a company.

OS: Could you tell me a little bit about the founding of R. Riveter as a concept and a brand?

Gunderman: Our founders, Lisa Bradley and Cameron Cruse, met in Georgia at Camp Merrill where they were both stationed with their husbands at the time. Cameron went to school for architectural design and Lisa has a master’s degree in business administration, and they were both struggling to find a job in that area. As military spouses, we’re forced to end our careers every two years and start all over again — and that’s assuming we can find a job. Lisa and Cameron founded R. Riveter on the premise of wanting to create this brand new, innovative business model that would allow military spouses to take their career with them wherever they go. Handbags were almost an afterthought. It’s funny, everybody thinks, “Oh, they were into handbags and then decided to help the military community,” but it was really the other way around. They wanted to help military spouses, and they thought, “What is the symbol of empowerment for women? What is something all women can relate to?” Which is the handbag. They were working out of an attic, working on a vintage World War II sewing machine, and they started collecting scraps of materials: army tents, liners, old uniforms. They started piecing together these handbags and making the model for what would become the signature line for R. Riveter. They named R. Riveter after Rosie the Riveter, and everything just sort of exploded from there. They started there in Georgia, and then Cameron was relocated to Fort Bragg, North Carolina. They opened their retail store in Southern Pines, and that’s been kind of the main hub ever since. We have Riveters all over the country now, and the handbags have changed over the years but the mission has stayed the same. We were on Shark Tank last February, and we had an amazing response from America. It was overwhelming. The emails we received, the kind words on Facebook and Twitter — it was crazy. We realized that there really was a support system behind us — not just the military affiliated, but civilians as well, who really wanted to see the military spouse community succeed and be able to go back to work.

OS: Did you have a lot of employment inquiries from military spouses around the country after the Shark Tank airing?

Gunderman: Absolutely. We made a deal with Mark Cuban for $100,000 and a 20-percent stake in the company. His team has been amazing, getting us more of the marketing support that we needed, and a little more of that guidance. But we did get a lot of attention from military spouses across the country. We received thousands of applications from people who sew and craft, and people who want to support the American-made movement. We are strong advocates of American-made. We want people to know that even though American-made products might be a little bit more expensive, it means jobs for Americans. And it means a better economy, and a durable, authentic product that’s going to last a lot longer. So we are consistently trying to share that mission with the world. In addition to that, we had a lot of military spouses come to us that owned their own businesses. They might make jewelry, or home décor, or art design, and they came to us and said, “We are so inspired by your story, and this is what I do.” And we received so many of those inquiries, that our founders put their heads together and said, “You know what, we need to help these military spouses. We want to help them make their mark on the world, and showcase their talent.” So we started a new branch of R. Riveter called “Post to Pillar” on our website. It’s a line of products that are made by military spouse makers and artisans. We are using our national spotlight and our website to showcase their products and their brands. There’s jewelry, candles, all kinds of things made by military spouses. So that’s something new and exciting that kind of came out of Shark Tank, and it wasn’t something that we anticipated.

OS: Do you anticipate opening up more stores either around the state or around the country?

Gunderman: We received a unique opportunity from a mall in Bethesda, Maryland, Westfield Montgomery Mall. They were starting a program for helping veterans transition from the military into retail. They offered us a store space where all of our rent would go toward this pilot program helping other veterans and military spouses and their retail ventures. So just this past week [August 4, 2016], we opened our store in that mall, so we’re starting to expand. The more we grow, the more military spouses we can reach, which is really exciting. But at the moment, we’re really focusing on our online store and our retail location in Southern Pines and now Bethesda, and we’ll kind of go from there.

OS: Are all of the materials used for R. Riveter’s handbags recycled from the military, or are some materials sourced locally as well?

Gunderman: When we first started, all of our materials were upcycled military materials, including repurposed military tents, tent liners, retired military uniforms, wool blankets. But as we grew, there was such a high demand for our bags that we weren’t able to keep up with demand with those materials because they are limited and hard to find. When we do find them, it’s a matter of how many bags we can get out of this one uniform. It got to a point where we needed to find new materials. Our founders started searching and found this really fabulous, water-resistant canvas that is high-quality, authentic-looking, and military-inspired. It matches our brand really well. We ended up separating our handbags into [two groups]: Limited Edition and Signature Collection. Our Limited Edition items are those military bags that are made out of uniforms and tents, and when you buy one of those bags you’re going to get a tag that says what it was made from. The Signature Collection is a little less expensive, and they are made from that military-inspired canvas. They look similar to the Limited Edition bags, but are made from a different material, but that was only to keep up with demand. The response we have received for those bags has been amazing. Everybody loves the color scheme, the durability, and the minimalist, urban feel, and all of our bags are paired with a vegetable-tanned leather.

OS: What is the importance of keeping R. Riveter’s home base in Southern Pines?

Gunderman: Southern Pines is really close to Fort Bragg, so it has deep roots within the military community. It’s been easy to spread our mission in that area, because of all the military-affiliated families and spouses, so word-of-mouth has just been amazing for our company. Grounding ourselves in an area near a military base has been a game-changer for us, and also just embracing those Southern roots, that idea of hospitality. Most of our Post to Pillar military spouses are from the South, and it’s just embracing that idea of empowering other women. We don’t want to compete. We are here to help each other out, and that’s really our ideology.