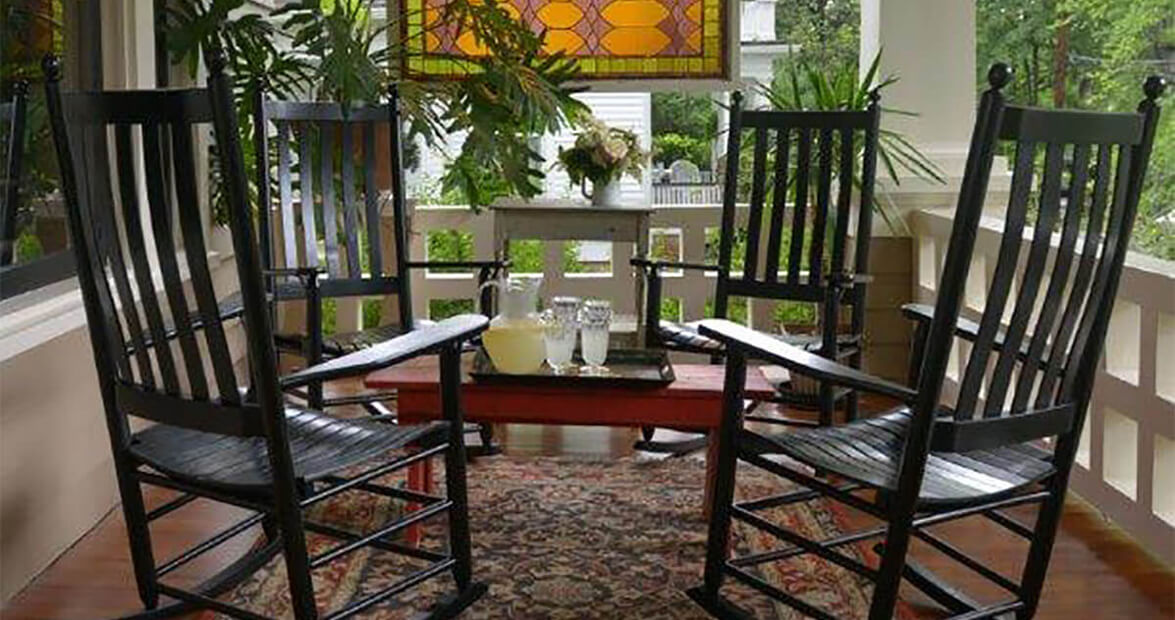 Troutman Chair Company is straightforward about what they do, even down to their name; the company is based in Troutman, North Carolina and their business is chairs. Most people have sat in a Troutman rocking chair before, but might not have known it; from the iconic rocking chairs in the atrium of Charlotte Douglas International Airport to Southern neighborhood porches, Troutman Chair Company has left a legacy across North Carolina.

Champ and Jean Land purchased Troutman Chair Company in 1999. During their tenure as owners, the Lands have balanced maintaining the beloved history of the brand while finding new ways to expand the company into the 21st century. Read Our State’s interview with Jean Champ below to learn about why she believes rocking chairs are important now more than ever, and the power they have to bring peace to people’s lives.

OS: Why were you and your husband interested in purchasing Troutman Chair Company?

Land: Funny thing — we were very happy living in Colombia, South Carolina and my husband was a sales rep for another furniture company. A friend of his who had owned a similar company in Statesville told him that there was a small company for sale in Troutman, and he ought to go check it out — so he did. The father, who has since passed, was ready to retire, and the son and grandson were not interested in continuing the company. We knew that this company had an awesome reputation, known for making the most comfortable rocking chair of its kind. Even the people that owned competing companies, they all would say that Troutman made a rocker that was more comfortable to sit in for a long period of time. So, because of its reputation and my husband being an entrepreneurial type like he is, he just thought this would be fun thing to do and also carry on their tradition.

Land: The first thing that we do is curve the horizontal back rails. Those are already cut or steam bent in a curve so that when those slats are put in, they are not straight across. You don’t feel anything straight across your back; your back curves that way. The second thing we do is we curve our seat. The seat slats themselves are cut to curve from front to back and then slope down, so it’s one of the most comfortable seats anybody can sit in, aside from maybe a goose down seat or something like that. When a seat does that, it creates this nice spot in the middle where it conforms to you instead of you conforming to it. The third thing we do is we mortise our backs, so that when you go to get in, the back is going lean back whether you lean back or not. Then there’s one more thing we do before the runners are put on — the rungs on either side of the chair are not the same size; they’re graduated from longest to smallest so that when you look at our chair without the rocker runners on it, the back of the chair is already leaning back. That means no matter where you sit, how you sit, you are going to be put at an angle that takes pressure off your spine and makes you relax. If you look at other chairs, other chairs are not designed that way so a lot of them will sit up straight. The whole purpose, the reason why we do what we do, is so that people will actually sit in those chairs and be so comfortable that the stress of the day just kind of ebbs away.

OS: Do you see a specific type of customer purchasing the rockers from your retailers?

Land: Many people research their purchase before buying, and they really want these chairs to be able to sit in. They’re looking for a bit of respite at their own home, or on their own porch. A typical customer might be a grandfather, or soon-to-be grandfather, buying rockers for their daughters to rock their babies in. Oh my gosh, it’s so sweet! We meet a lot of men who are so sentimental, buying rockers for their wives for anniversary presents. We’ve had people that met in the Charlotte airport where the rockers are, or they met at camp. A lot of camps in North Carolina, South Carolina, and upstate in the Northeast have Troutman rockers, and people remember enjoying them at camp so they want them for themselves. To some people, a front porch is not a welcoming place unless it has a few wood rockers there. We’ve had colleges put rocking chairs in areas where students can relax. A teacher in Vermont this year is teaching civics to high school students, and in lieu of desks, she will have 24 rockers for her students to sit in. It puts them all on equal footing, it makes them relax, and they can have honest conversations.

OS: What is something many people would find surprising about the rockers’ production process?

Land: People might think we’re bigger than we are, and they’re surprised to find out the amount of handwork that goes into making a chair. We have 22 employees, and each employee’s hands are on just about every single part of the chairs. Due to the curves, a lot of sanding or other processes are done by hand. A lot of machinery was designed for flat pieces; round pieces are a little more difficult to make. We have hands touching everything so by the time it gets to the final assembly stage so that it can be base coated, everybody should’ve found an imperfection or two. After the base coat is put on, every chair is hand-sanded. So part of the reason why these chairs last so long, is the attention and the process of how we put them together.

OS: What is one of the most rewarding things about doing this work?

Land: We’re kind of driven by the end result, which is someone calling and saying, “Thank you so much for making a great product,” or someone coming and visiting our plant and saying, “We know it’s hard to do what you’re doing in the U.S. and to keep your manufacturing here.” There are tons of rockers that are imported, they’re all online everywhere, so that is what makes us smile. We have happy, wonderful, caring employees that all act like a family, and we have people that desire our product. We have people that sell our chairs that really believe in what we do and sell them so enthusiastically. But I think that the most rewarding thing is watching people sit back in our rockers, and we can see they’re relaxed by the look on their face and their body language. Our world needs more people sitting in rocking chairs! We might not argue so much, you know?

OS: What should North Carolinians know about Troutman Chair Company when they are relaxing in one of your chairs?

Land: What we would like people to know in the end is that we’re here to earn a honest living, being fair in what we do, fair to our retailers, fair to our employees, and fair to consumers. We really do care what people think — if they have opinions or if they have problems. Rocking chairs, they’ve been around forever, and people are drawn to them. They’re drawn to a rocker because its not a stiff chair; it is a kind of a place where you’re comforted, and you can be comforted sitting next to somebody you don’t know in an atrium at an airport full of people. So, we run our business in an old Southern manner; we’re not aggressive, we just state the truth in what we do. We’re serious about what we do and we are honored that somebody would spend their money on one of our chairs to put on their porch.