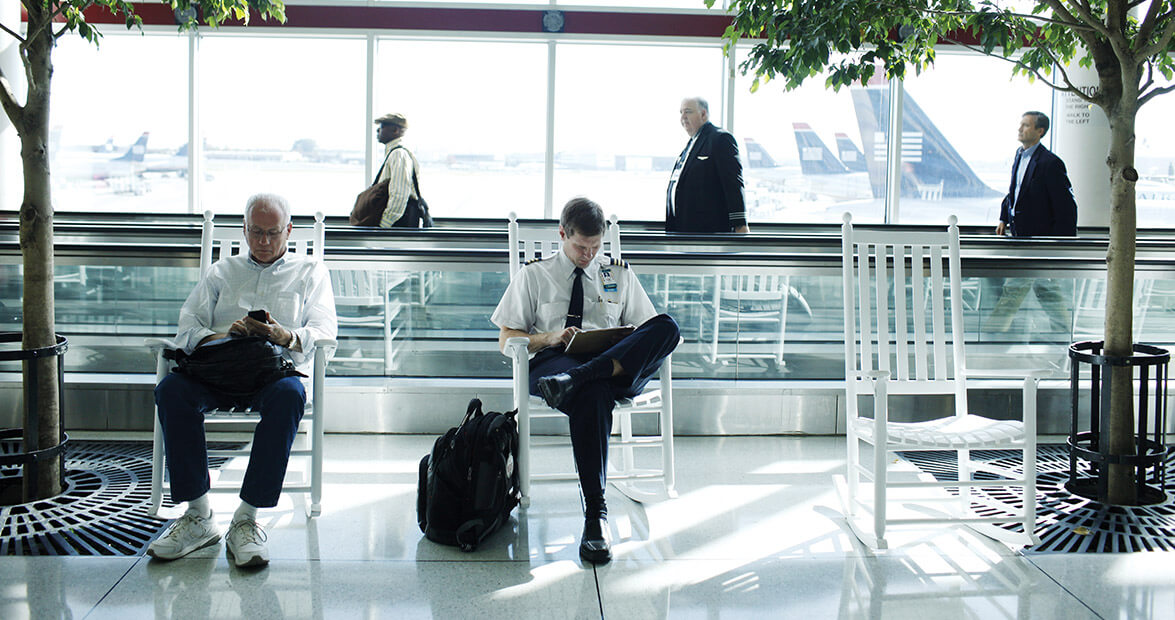 Editor’s note: This story originally appeared in the January 2013 issue of Our State.

Ed Rimmer is precise about his time. Came out of the service in 1946. Worked in the dairy business for 26 years. Sold his cows in ’73. Member of the Troutman Volunteer Fire Department for 23 years. Started at the Troutman Chair Company in ’87.

Since ’87, his weekdays have gone like this: Ed rises at 5:15 a.m. He’s at work by 7. He shuffles his way back to his corner of the factory among stacks of unfinished rockers. He’s precise there, too. He flips the switches. Lines up drill bits. Checks forms. He turns on the drill and buzzes holes into the legs of children’s rocking chairs. He puts those legs into a press, two at a time. He puts slats into the form. He steps on the foot pedal. The press squeezes with 60 pounds of pressure. Psst. He takes the completed parts, an H with two rungs, and sets them atop a neat stack. He grabs more legs. More slats. He repeats this all nearly 100 times. Buzz. Psst. Again. He leaves by 3:45 p.m. He climbs into bed at 10:30. Maybe 11. He wakes at 5:15. Buzz. Psst. Again.

Before the presses arrived in the factory in Troutman, just north of Lake Norman, three people did this job, hand-hammering slats into chair legs. Now it’s just Ed. He’s 86. The white hair he has is cropped close. His thick glasses have plastic protectors on the sides. He wears a tight, white T-shirt and baggy jeans. He could retire. Doesn’t want to. He’s got some time left, he’s decided. Ed’s father died at 101. He has an older brother and an older sister, both in their 90s. He’d rather not sit around. “I just work,” Ed says.

The Troutman Chair Company is a factory full of Eds. The plant is full of corners and workbenches, band saws and rodding machines. Everybody comes in, finds his or her spot, and turns square planks into rounded boards fit for a rocker. Each one is assigned a step of the chair’s assemblage. Some cut the wood. Some shape it. Some stain it. Some sand it.

Mothers and sons work here. Sisters. Spouses. Of the 30 people working here, only two have been doing so for fewer than 13 years. People come to work. They tend to sit still.

Charlotte Douglas International Airport placed rocking chairs in its atrium in 1997 as part of a temporary photography exhibit called “Porchsitting.” The chairs were intended to be idle props. But given that they gave the atrium the feel of, well, a porch for sitting, people just started to sit.

They rocked. They swayed. And they stayed. So did the rockers. Airports across the nation copied.

Jean and Champ Land, then owners of Troutman Chair Company for a few years, were flying out of Charlotte with their children in the mid-2000s. They sat, too, but didn’t particularly care for the chairs. So Champ called the airport. I’ve got some better ones, he said.

Now there are more than a hundred Troutman rockers at the airport, from the atrium to the elbow of Concourse E. Some face the tarmac and the planes. Some face inside so you can sit, rock, and watch everyone else hustle.

When you sit, you can’t help but rock. Pushing down gently with the soles of your feet, swaying with your own internal rhythm. The nervous can’t push fast enough. The content seem to look up. The busy look down. Eyes browse; bodies sway like reeds blowing in a breeze. It’s a perch from which to watch the world pass. With a rocking chair, you envision a porch, or a parlor, or a grandparent; you imagine serenity, present or not. It speaks. Sit down. Relax. Look.

In a digital world, rockers are analog. iPhones, therapists … you don’t need all that, Jean says. Want kids to talk? Put them in rockers. Words come. She has a bunch on her back porch. During Bible studies she leads, they’re never empty. “If you go to the principal’s office, and he’s got you sitting in a rocking chair instead of in a straight chair,” she says, “you probably would confess everything that you had done wrong.”

Jean Land doesn’t like to sit still. She walks around. She says, “Oh my lands,” when she’s excited. Her husband, Champ, is the quiet one. But when Champ heard in 1998 that the Troutman factory was for sale, he couldn’t stop talking about it. A dealer told him he’d bought a diamond in the rough. “We’ve been polishing it ever since,” Champ says now.

They kept the design. It was a good design, Champ said. He’s only made small changes. He rounded the back a touch to make it more comfortable for all. Jean slouches when she does sit, he insists. Jean’s reply: “You’re just not sitting right.”

Jean and Champ made one more change. Rockers are more commodity than corporate brand, and there was no way to tell for sure where a chair came from. So they began stamping the Troutman Chair Company logo on a small stainless steel arm brace. If it’s not there, it’s not theirs. Just check under the arms on the rockers at Charlotte’s airport.

The various styles of rocking chairs do, however, come with majestic names. The Boston. The Windsor. The ladder-back. Rockers come with a long, distinguished history, too. Mark Twain sat in one. Lincoln was shot in one. President Kennedy’s doctor prescribed him a rocking chair for his back pain. It worked. The action of his pushing loosened the muscles in his back. Kennedy started sitting in rockers everywhere. In the Oval Office. On Air Force One. Reporters noticed. A national craze was born.

“As word of that got around, there was a great rummaging in the national attic,” Life magazine said in an eight-page spread in 1961. A chair-seeking nation swamped the company that made Kennedy’s rockers, P&P Chair Co. in Asheboro, with orders. P&P regretted to say that its little factory might not be able to keep up and that some people may have to wait. The workers appeared with that 1961 Life story, 24 in all, sitting in Kennedy rockers, smiling at the camera. The grinning owner, William C. Page, sitting up front, uttered the most Southern of lines: “Well I declare!”

Now Jean and Champ own P&P, too. When they bought the name and design in 2009, some parts for the Kennedy rockers were imported. They stopped that practice.

Jean and Champ sell thousands of Troutman and P&P rockers a year. Most in the summers. Most at family-owned stores. Troutman chairs aren’t found at Cracker Barrel or Lowe’s. During fall and winter, the chairs stack up inside the factory. The boxes in the warehouse sit and wait.

Champ’s usually in the office on the phone. Jean paces the factory floor. As she goes — she’s always going — a blond ponytail bounces behind and her boots clap. She walks up on Olga Chavez and Maria Alba. They’re hand-staining seats. They haven’t been told to do so, but they know it needs doing. “They are just on it,” Jean says.

Jean points at a man working a machine along a far wall. “You’re gonna love his name,” she says. “Ready?” It’s John Wayne Wyatt, she says smiling, then turns and moves on. “Want to see the dry kiln?” Jean asks, already starting toward the dry kiln. “Where we boil posts?”

Along the way, Jean explains the process. Logs of North Carolina oak and ash arrive. They’re stacked like Jenga blocks to dry for up to a year. Then they’re planed, rolled, shaped, and sawed. Posts are boiled. Chair backs are curved in a kiln. Other pieces are drilled, hand-sanded, tumbled, pressed, nailed, squeezed, and stained or painted. The completed chair goes into a cardboard box marked “Troutman Chair Company: World’s Best Rockers,” although the World’s Best Rockers part is a little boastful for Jean’s and Champ’s liking, so it won’t be there much longer. Ten months after a log rolls in, chairs roll out.

The company tries not to waste much. Wood scraps go into the boiler that heats the plant. A dairy farmer picks up the sawdust. Workers scavenge leftover parts.

Jean walks by a phalanx of posts and picks up one. “Feel how heavy this is,” she says. It’s made from one piece of wood, never glued together.

Jean walks past Tania Alvarado and stops. “Do you have your 15-6 side slats, sweetness?” she asks. She does. “She’s amazing,” Jean says. Tania makes the seats. First she runs them through a saw to make sure the boards come out even. Then she drills holes and hammers in nails, forcefully enough to get through, but gently enough not to indent the wood. She can crank out 120 seats in a day. Buzz. Thwack. Again.

Jean keeps walking, through hundreds of chairs in various states of completion, among people doing the work they need to do, not the work they’ve been told to do. To make a chair, you have to know it. You have to stay put. “Oh my lands,” Jean says as she looks around. “Y’all are on it.”

She walks by Ed. “She’s a super lady,” he says. He turns to his press.