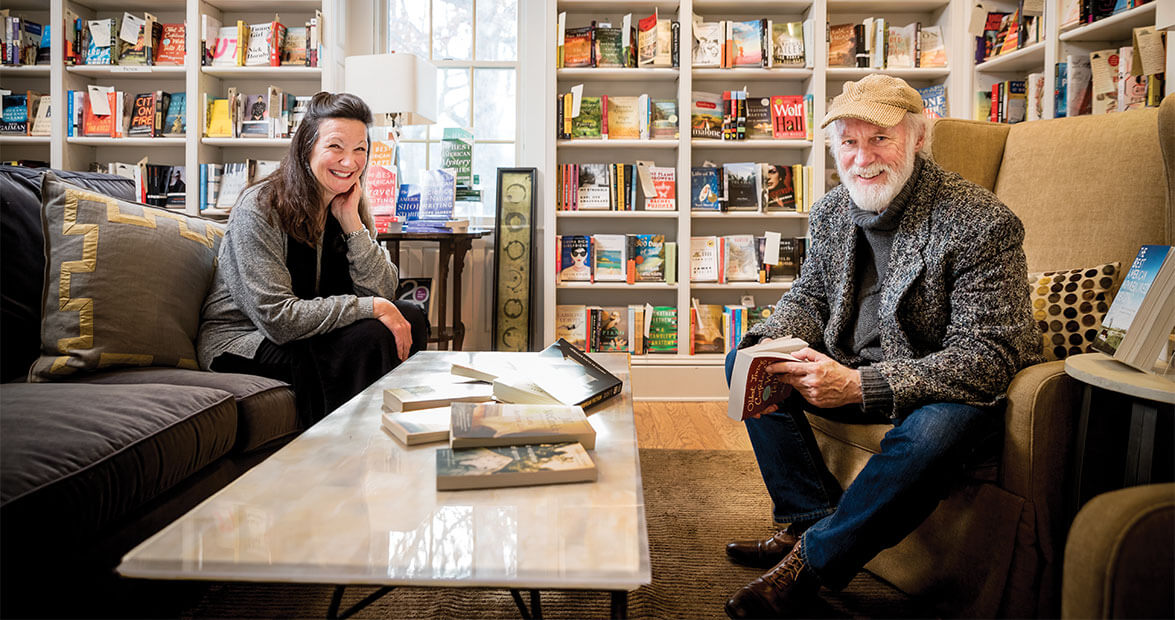 I once heard that if a book falls from a shelf or just catches your eye — you notice its angle in the row, or the way the afternoon light hits its spine — you need to check it out to see if there’s a secret message or some other reason you were drawn to it. Of course, the prerequisite for such an adventure is that you must be in a place with rows and rows of shelves filled with books, real paper-and-ink objects to hold in your hands.

My first experience in such a room was at the Tanglewood Elementary School library in Lumberton, where, once you got beyond the game of rubbing your feet on the carpet to give your classmates an electric shock, and then listened to the librarian’s rules of behavior — Don’t rub your feet and shock your friends, and do not talk! — you could simply roam through various worlds. Territories were identified by numbers like road signs: 590 took you to animals; 800s toured poetry and fiction; 920 led to a biography series with silhouettes of the subjects on the spines. I went searching for Helen Keller, yet again, but also found Marie Curie and Jane Addams, who became new favorites.

At that time, I had no idea that there were stores where you could have the same experience. The first time I ever ventured into one must have been when I was 14 and my sister was a freshman at UNC Chapel Hill. There, on Franklin Street, I discovered The Intimate Bookshop, a place I suspect lived up to its name for many of us over the decades it was there. The red-and-white awnings beckoned you inside, and the gleaming wood floors creaked and whined in greeting. Well-attended and loved like a library or church or museum, it seemed to beg the same quiet reverence.

We North Carolinians support more than 60 independent bookshops, and each one feels like hallowed ground to those who frequent it. Inside, there is the promise of more to see and learn than you can possibly absorb; there is the promise that you will most certainly find something. In 1984, when my first two novels came out, there was not a bookstore in my hometown, Lumberton, to sell them. So, the publisher convinced JCPenney to stock them. It did not go well: The books would arrive, and then, inevitably, someone would say, “Wait, we don’t sell books,” and ship them all back.

Now, I live surrounded by independent bookstores — all unique, all old friends, all with great stories to tell. Browsing the stacks, there’s often the same hushed awe that my earliest library experiences brought. No grinding coffee machines here, no loudspeakers announcing a run on this or that. The people who work at these bookshops are readers, too, and they introduce customers to books the same way you might try to match one friend with another.

Just in what I consider my local community, we have Purple Crow in Hillsborough, Flyleaf in Chapel Hill, McIntyre’s at Fearrington Village in Pittsboro, The Regulator and Letters in Durham, and Quail Ridge in Raleigh. I would add to those the stores I always visit when I’m nearby: The Country Bookshop in Southern Pines, Bookmarks in Winston-Salem, Malaprop’s in Asheville, Park Road in Charlotte, and Two Sisters in Wilmington. Unlike big chains and superstores, each of these stands alone in its personality and particular offerings. And yes, the relationship is, indeed, one that feels intimate. 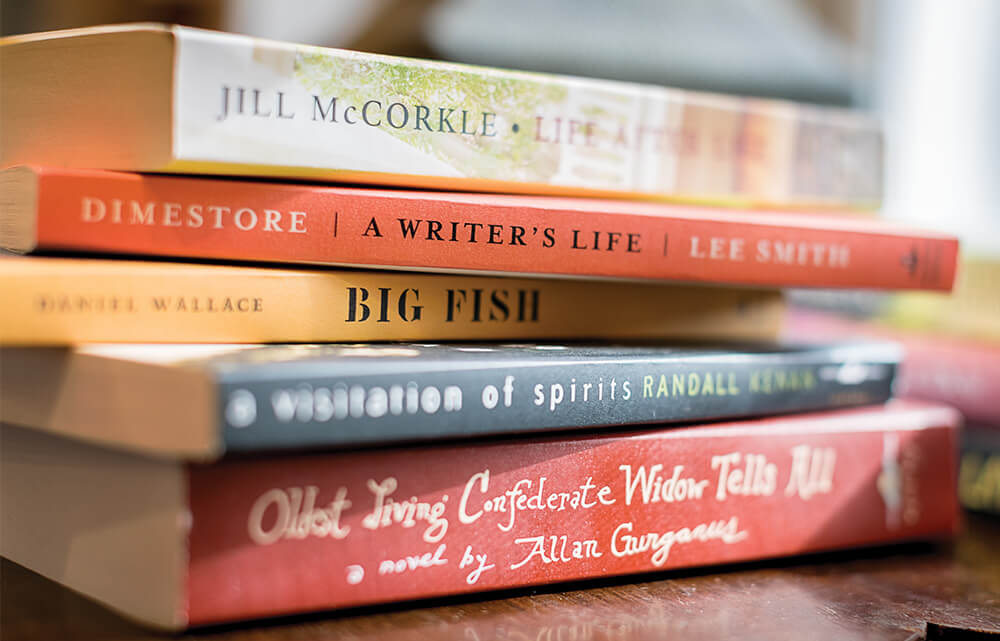 I’m never more aware of the value of this relationship than when I’m on a book tour. My worst book tour moment (thus far) came at a megastore in a big city unfamiliar to me. I was stationed at a card table at the bottom of an escalator when, over the PA system, a weary voice announced, “An author is by the escalator signing her book, if you want one.” A customer approached me to ask, “Do you work here?” Another wanted directions to the bathroom. Then came the often-asked questions: “Did you write this? Is it any good? Do they have coffee here?”

Years ago, I overheard someone telling how he had been afraid to go to The Intimate, thinking it specialized in women’s underwear. (The other person was disappointed because they didn’t specialize in lingerie and erotica.) A big loss for all who didn’t step in, because what they really sold were tickets to wherever you wanted and needed to go, and into lives and into parts of yourself that you didn’t even know existed.

In the fall of 1985, I was substituting for a writing professor at UNC Chapel Hill and thinking a lot about the writers and books that had inspired me early on. Revisiting Anne Frank’s The Diary of a Young Girl (Dewey Decimal 940.53), I paid particular attention to the afterword. The Pocket Book paperback edition I was reading referenced a book I hadn’t encountered before, published in 1958 — Anne Frank: A Portrait in Courage by Ernst Schnabel. Making a note to look for it in the library later, I wandered, as I often did on nice afternoons, to Franklin Street and into The Intimate. I was upstairs in the paperback section when my eye was drawn to a thin, yellowed book sticking out at an odd angle. When I pulled it out, I found that it was the very book I had made note of just hours before. And here it was, for a mere 65 cents.

For the rest of my life, I will remember what I felt in that moment: I held the book close, as though someone might snatch it from me. Looking around the room and toward the window to the street below, I wondered: Was someone watching me? Was this some kind of joke? I quickly went to the checkout, my hands shaking as much as if I had stolen the book, and more so when the gentleman at the cash register asked, “Where did you get this?”

Upstairs, I told him, in the paperbacks. “I didn’t know we had used books,” he said, and I just shrugged. “Well, how much is it?” he asked. I pointed to the only price on it, which had been typed on the yellowed jacket: 65 cent. Slightly higher in Canada.

That night, I read every word, still feeling the buzz of what I called the woo-woo moment. And then, in the wee hours, I dreamed that someone left a Post-it note by my bed that said: I came to see if you believe. And, in fact, I awoke sitting straight up and saying, “I believe … I believe.”

At the time, I wasn’t quite sure what I was expressing belief in, only that there was something beyond my understanding, and I felt privileged to even be aware of its existence. It was all so real, I was afraid to look around, for fear that I would, or perhaps would not, find that Post-it.

Over the years, I’ve come to think that my profession of belief was in the power of all that we don’t know but crave to learn, all the hows and whys and whens and wheres that a reading life can inform. Perhaps it was also the belief that people are resurrected and given a new life by what they pull from the shelf. It’s been more than 30 years, and I’ve held this story close for fear that telling it would diminish its power; and yet, now it seems that such expressed beliefs have never been more important and necessary.

We live in a time when it’s so easy to go online and order anything or just download whatever title and be done with it. But you miss so much by not physically pushing open a door with jingling bells, welcoming you into a community, and maybe even a conversation. And while you scan the shelves in search of what you came for, you discover the book you’ve never even heard of, but needed to find at just that moment. The experience is magical, enlightening, and, yes, intimate.