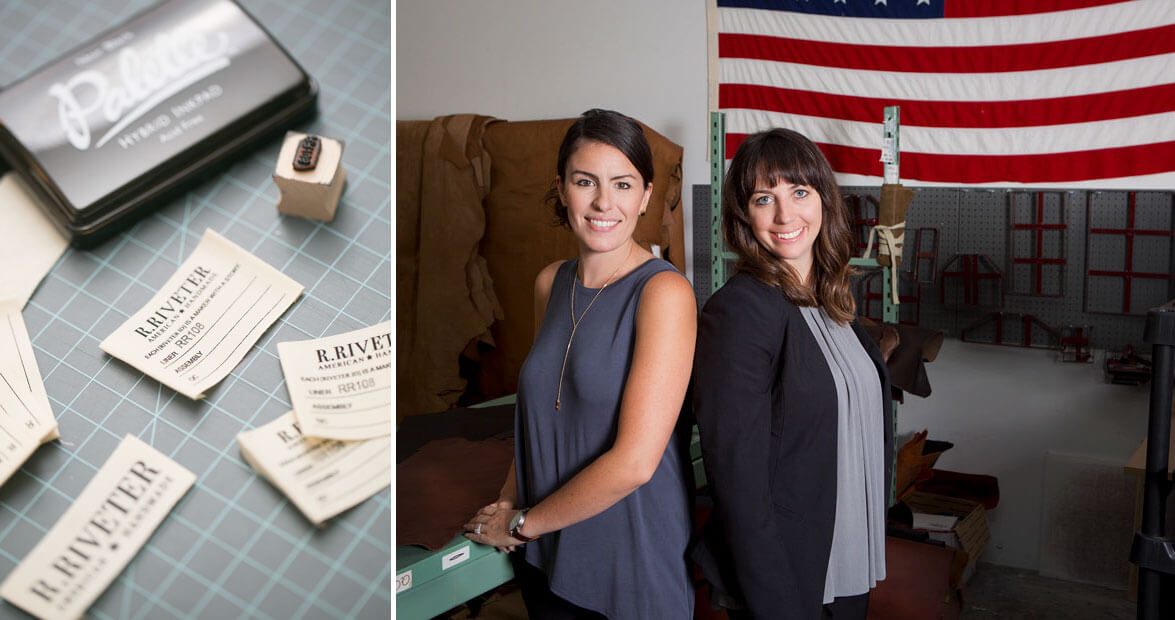 The brass dog tags hanging in the window of R.Riveter’s airy flagship store in Southern Pines are your first clue. Then, among the shelves stocked with beautiful handbags in shades of black and brown, you see the ammo cans, the stacked vintage trunks, the military hats, and you realize that everything about this brand is a nod to military history and the families serving our nation — especially the bags.

In fashion, labels matter. And the most important label on an R.Riveter bag is the small canvas tag with a number that represents the military spouses who made it. Each piece of an R.Riveter bag — from the hand-dyed yellow support tags and the straps to the leather and canvas shells — is made by the spouse of an active duty military member. At the back of the store, a map of the U.S. is filled with pins showing the locations of the “riveters” who are the reason R.Riveter exists. 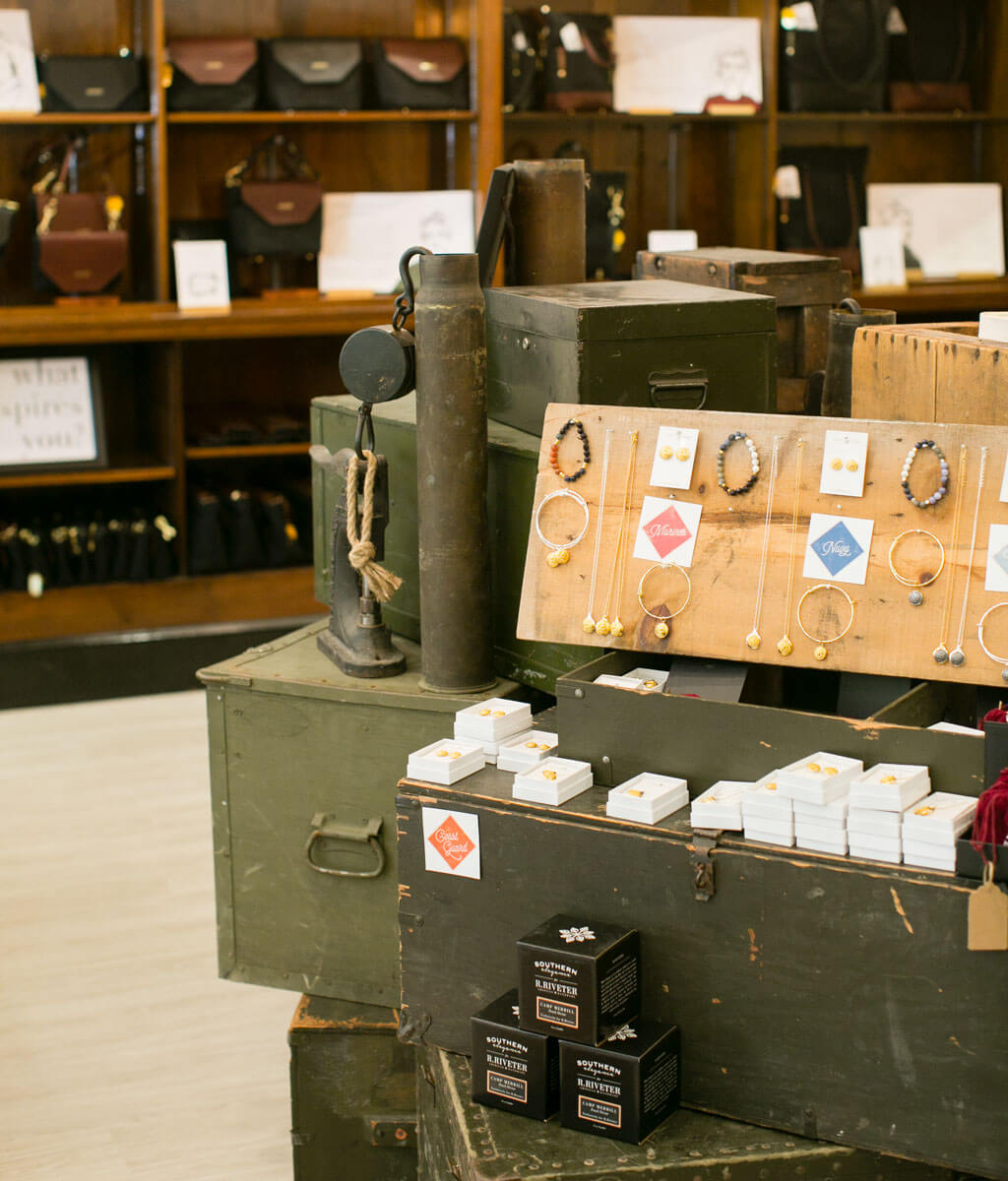 The concept provides a connection to the original riveters who stepped into manufacturing roles during World War II when men went to fight overseas. R.Riveter co-founders Lisa Bradley and Cameron Cruse wanted to honor the brave “Rosie the Riveters” of history — and the brave women who serve as military spouses today.

“Much like the riveters who assembled airplanes, it wasn’t just one rivet that held the plane together,” Bradley says. “It was all those rivets coming together to create a very important product in our nation’s history.”

Bradley and Cruse came up with the idea to start a business while their husbands, both Army Rangers, were stationed in Dahlonega, Georgia. They knew that military families relocate often, making it hard for spouses to find meaningful, flexible work. So in 2011, the pair pooled their modest savings, purchased an industrial sewing machine, and started making handbags in Cruse’s attic. The bags were an instant hit.

Each of the stylish and classic bags was named for an important woman in history who inspired its design: A signature canvas and leather tote called The Grant was named for Julia Boggs Dent Grant, who traveled more than 10,000 miles to be with and support her husband, Gen. Ulysses S. Grant, while he served in the Union Army. The Patton, named for Beatrice Patton, wife of WWII Gen. George S. Patton, was the inspiration for the versatile clutch. 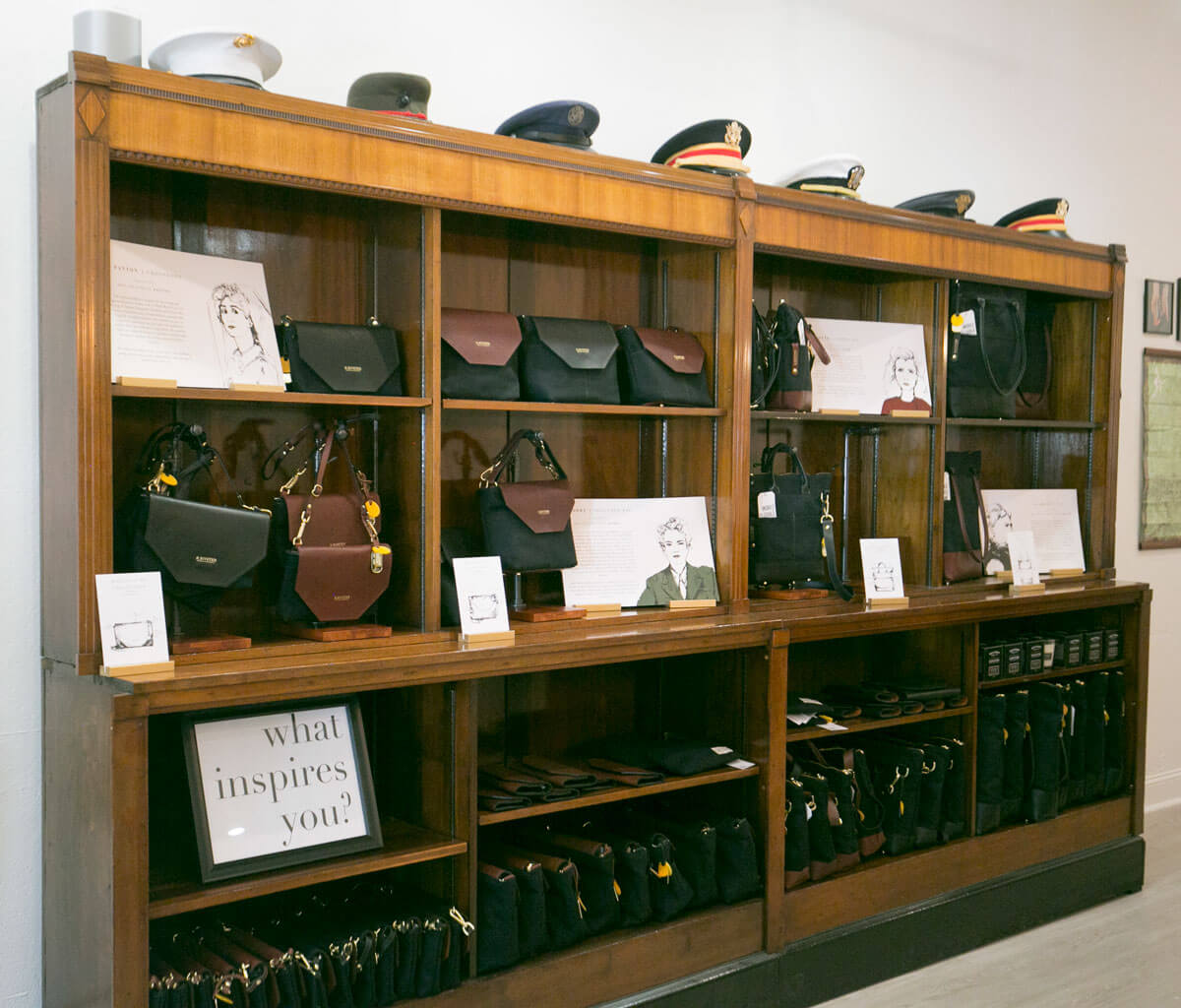 At R.Riveter’s flagship store, descriptions of brave women from history can be found alongside the handbags they inspired. photograph by R.Riveter

And while Bradley and Cruse’s commitment to R.Riveter was tested when their families were transferred to Fort Bragg, relocating turned out to be a good move for their fledgling handbag business.

“Moving to North Carolina was the first time that we got out of Cameron’s garage and into a true production space,” Bradley says. “It was our first leap of faith that we really wanted to invest in the company beyond our time and a couple of sewing machines.”

As the business — and the number of handbag designs — grew, the women hired other military spouses to help with manufacturing.  Today, 35 “remote riveters,” who are stationed on military bases nationwide, craft canvas and leather components and ship them to the R.Riveter headquarters in Southern Pines, where the bags are assembled. Up to 12 riveters might contribute labor to a single bag before it’s sold online or in their storefront. Want to know who made yours? Head over to the company’s website to see where you can find each “RR” number on your bag, and match them up with riveter bios. 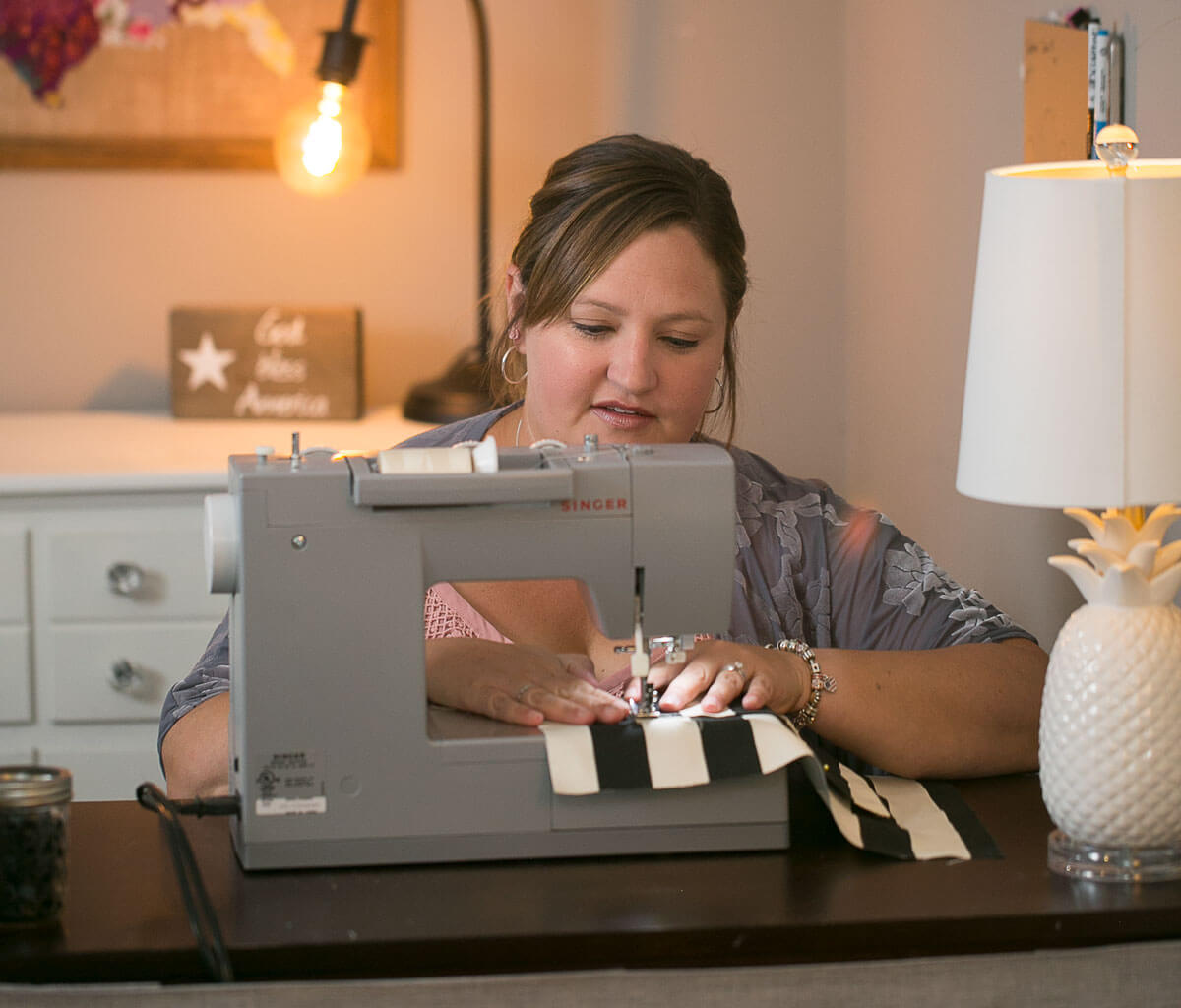 A“remote riveter” crafts the canvas interior of a handbag. photograph by R.Riveter

Lisa Zimmermann, a military spouse who handles marketing for R.Riveter, believes the personal connection is a powerful motivator, explaining, “Connecting customers to the makers not only draws people to our company, but it also gives them a reason to come back. They understand that they aren’t just buying a bag; they are supporting military spouses like Jocelyn in Fort Carson and Danie in Fort Campbell.”

A 2016 appearance on the TV show Shark Tank allowed Bradley and Cruse to take their business to the next level. They secured a $100,000 investment and partnership with billionaire entrepreneur Mark Cuban to help scale production. The appearance did more than transform their scrappy startup into a thriving business — it gave the founders the confidence to keep pursuing their unique approach to manufacturing.

“Five of the best business leaders in the country told us that our business model is a really viable way of doing something. Our mission — R.Riveter doesn’t hire military spouses to make handbags; we make handbags to hire military spouses and create a greater sense of mission — meant a lot to them, and that was really validating,” Bradley recalls. “It also gave us the national platform that we needed to share our story.”

As awareness of the R.Riveter mission spread, the number of military spouses eager to help exploded. The company currently maintains a waiting list of hundreds more who want to be a part of their mission.

The work, Cruse believes, provides both employment and a sense of pride to military spouses. The combination of meaningful work, empowering community, and gorgeous, handmade handbags is the reason that sales on the website, RRiveter.com, and the flagship store in Southern Pines are brisk. Some bags, like The Corbin — a backpack named for Margaret Corbin, a nurse who fought alongside her husband during the American Revolutionary War — are hard to keep in stock. 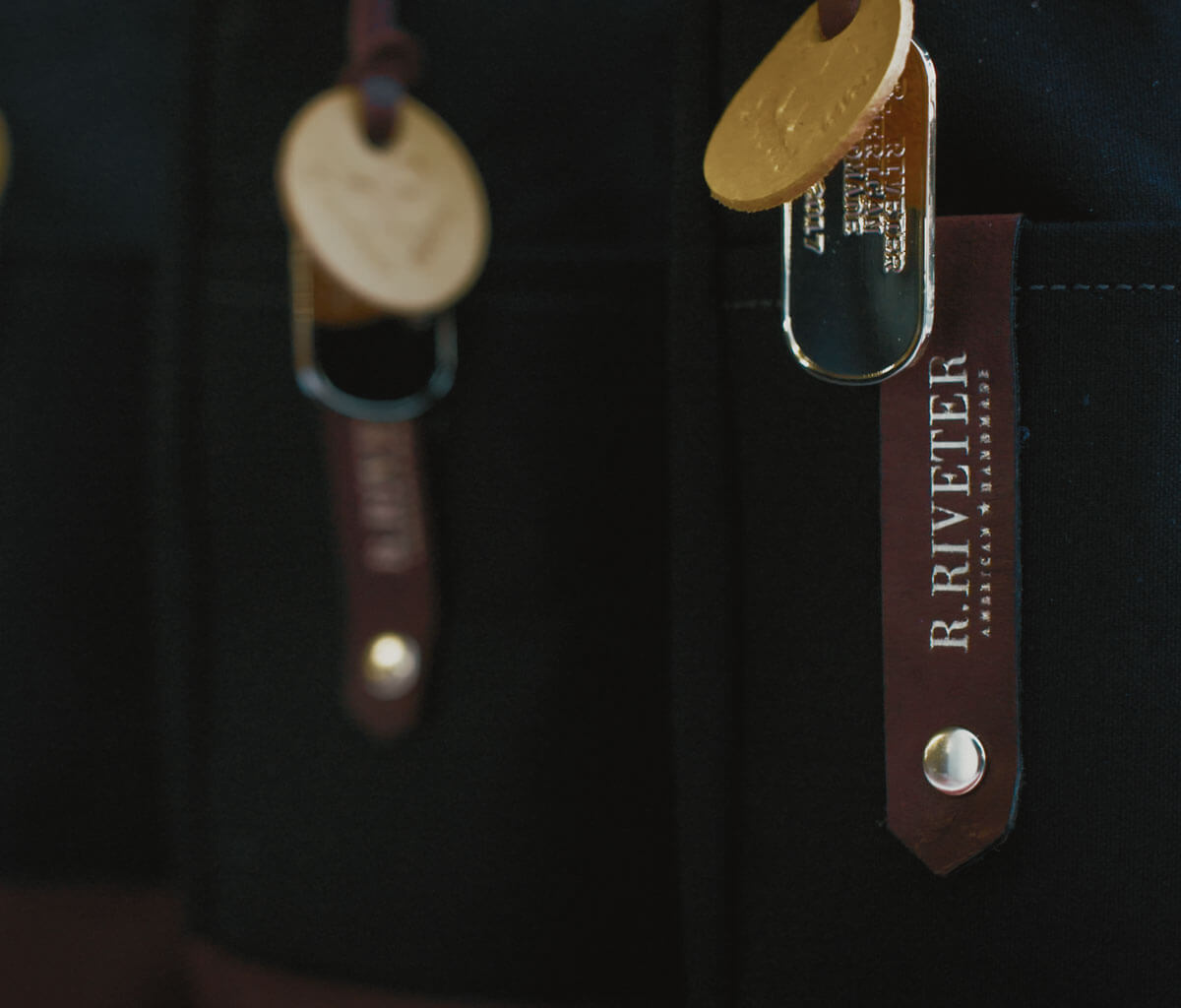 Each piece of an R.Riveter bag — from the hand-dyed yellow support tags and the straps to the leather and canvas shells — is made by the spouse of an active duty military member. photograph by R.Riveter

And since the storefront opened in 2014, R.Riveter has continued to expand its impact on military families. The flagship store employs a team of women whose spouses are stationed at Fort Bragg to handle tasks ranging from marketing to merchandising, and it carries a selection of products, including candles, bottle openers, and jewelry crafted by entrepreneurs with ties to the military, or with roots in American manufacturing.

“People are becoming more thoughtful consumers, and love that R.Riveter empowers them to meet all of the military spouse makers who have taken part in crafting their handbag. This takes our products from being just a handbag to being a product that impacts people’s lives,” Zimmermann says. “We have a saying here, ‘of many, one,’ and it means that we are stronger together; whether you’re making the product, buying the product, or helping sell the product, we’re all part of this amazing community that can make a difference.”