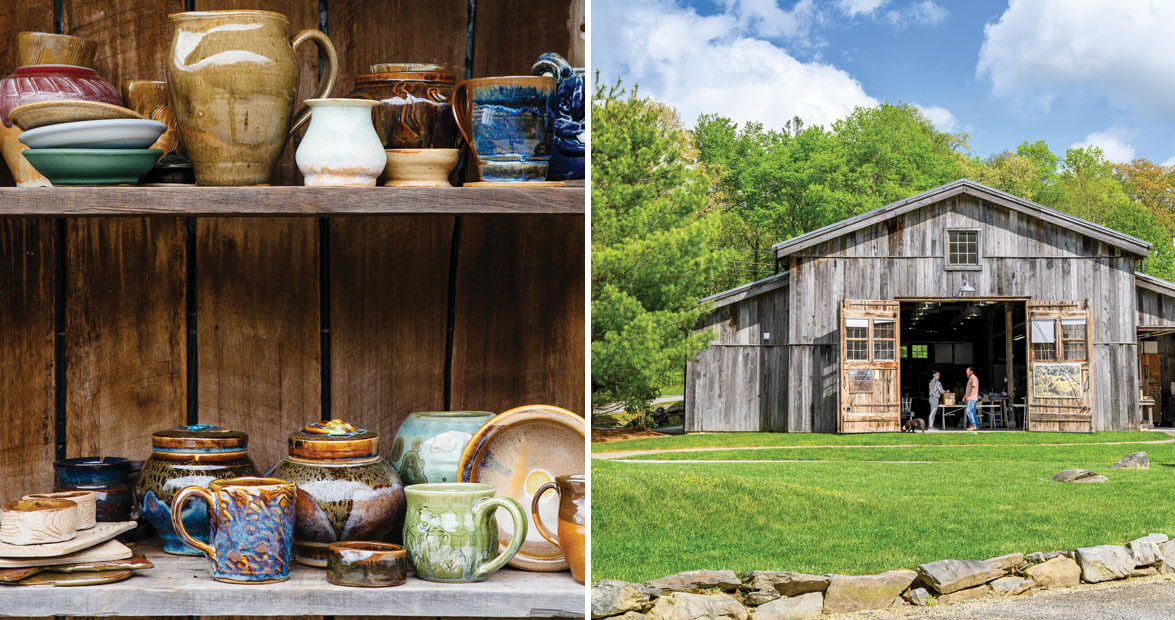 On the day that Kat Ford interviewed for a position in The Bascom’s gift shop, she wandered upstairs to the visual arts center’s gallery space. There, in the middle of the room, was a single clay pot, a piece made in 1860 by an enslaved South Carolina man named Dave Drake. On the side of the pot were handwritten verses that Drake had composed — a remarkable achievement for someone prohibited by law from learning to read or write.

“The significance of that pot moved me so much, and I knew that this was the place where I wanted to work,” says Ford, who is now the director of community engagement at The Bascom in Highlands. “It speaks to the human spirit and to things that are important. That’s the power of art.” 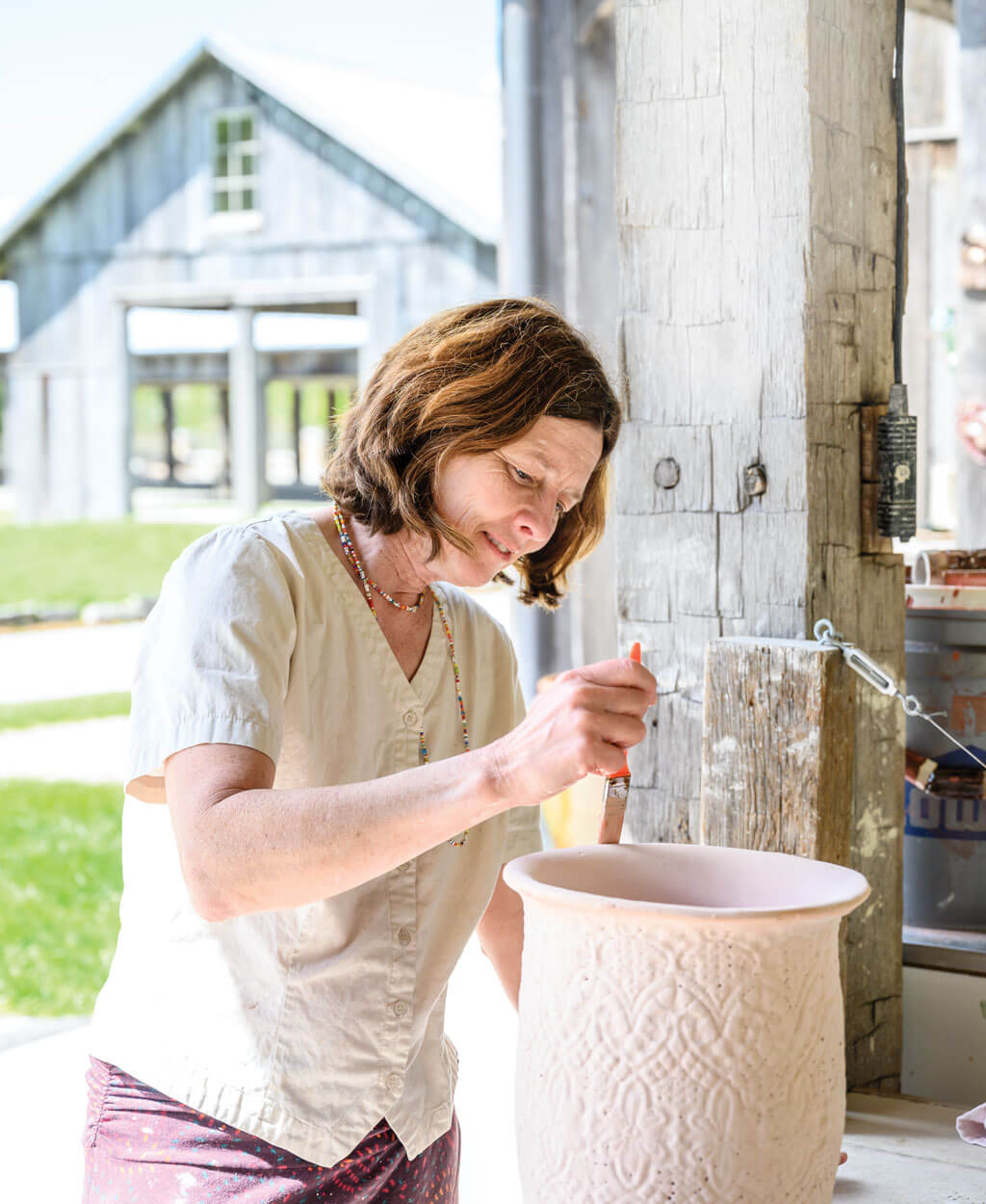 At the Dave Drake Studio Barn, visitors can watch potters like Jodie Zahner at work. photograph by Emily Chaplin

The Bascom began in 1983 as the Bascom-Louise Gallery, a single room in Highlands’ Hudson Library. Watson Barratt, who lived in New York but vacationed in this North Carolina mountain town, established the gallery in his will, in memory of his wife, Louise, to showcase regional artists. Over time, the gallery amassed a permanent collection of fine art ranging from photographs and abstract paintings to contemporary baskets and early Southern furniture, most of it donated by collectors. By the mid-2000s, the community saw the need for a more robust visual arts center, a place worthy of the art one might see in New York, Chicago, or even Paris.

Today, visitors to The Bascom pass through a covered bridge onto the sprawling six-acre campus to take art classes, wander the sculpture trail, or watch pottery demonstrations at the Dave Drake Studio Barn. Three galleries host permanent and temporary exhibitions featuring works by local artists — including potter Ben Owens III, painter Julyan Davis, and woodturners Ed, Phillip, and Matt Moulthrop — that sit next to art from masters such as Francisco Goya and Edgar Degas.

Last year, during a temporary exhibition, Teresa Osborn, The Bascom’s executive director, overheard an awestruck teenager say to his friend, I can’t believe I’m seeing a Picasso. “We brought that to him,” Osborn says. “That was very humbling to overhear.”

Making fine art accessible to the rural community is an important part of The Bascom’s mission. There’s no admission fee for the galleries. Even the grounds and the buildings are approachable — seamlessly integrated into the landscape as an homage to the property’s past as a farm and riding stable. Parts of the original barn became the Dave Drake Studio Barn, and the main barn — made with wood from a 19th-century Pennsylvania building — features original beams and floorboards juxtaposed with expansive windows and clean white walls to display the exhibits, like the one that included that Picasso. “In many other settings, it would make people feel very intimidated to see work like that,” Ford says. But The Bascom “lends itself to feeling very inviting and maybe more aspirational and educational.” 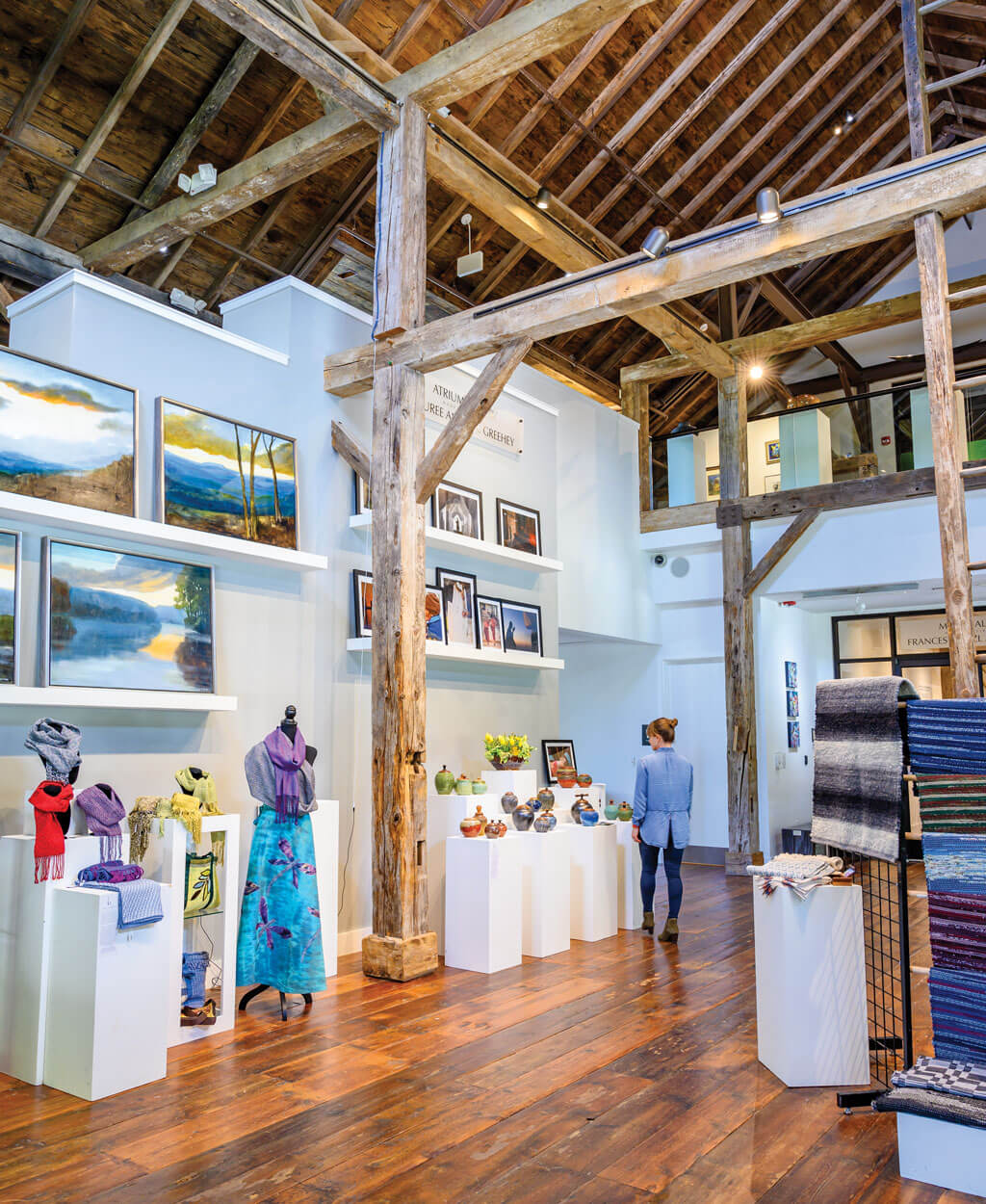 A visitor browses art inside the main gallery. photograph by Emily Chaplin

Education, outreach, and exhibition are the pillars upholding what the center does, Ford says, whether visitors are there to learn how to create, sell, or collect art; explore art history; or interact with artists. “Art is a joyous, beautiful thing,” Osborn says. “It’s an honor and a privilege to be able to share that on a daily basis, because you never know how people need art, how they use it.”

Last year, a woman approached Osborn and told her that a pottery class at The Bascom had helped a young girl she knew who was battling depression. Those classes saved that girl’s life, she said.

And that, Osborn says, is the power of art.