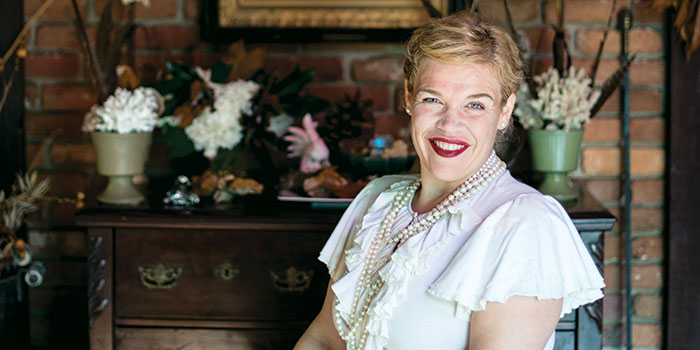 Here’s a farmer who looks nothing like a farmer.

Erin Weston is 30-something — she never tells her exact age, so don’t ask — and is more inclined to wear designer jeans than anything by Carhartt. Here’s a farmer who, by her own admission, keeps bankers’ hours. “I wake up at 8 o’clock,” she says. “I never schedule anything before 10.” Then she laughs with as much burst as a camellia flower in the drabness of winter.

Here’s a farmer who grew up in suburbia — Apex — and went on to attend the University of North Carolina at Chapel Hill, where she majored in art history. She became schooled in Impressionism, Abstract Expressionism, symbolism, postmodernism. Armed with her degree, she moved to Philadelphia, then to New York City, where she cultivated a healthy social life and tried to sow the seeds for a career.

Here’s a farmer who almost landed a plum job with “Martha Stewart Living,” that purveyor of all things pretty and pampered. The show recruited her to produce gardening segments, and she recruited her dad, Noel Weston — who served more than 30 years as the city of Raleigh’s gardener and horticulturist — for counsel and inspiration. “He gave me incredible insight into a world that I was just not aware of,” Erin says.

But then the scandal broke. Martha Stewart became entangled in a securities fraud investigation. The producers assumed the storm would blow over and assured Erin she had nothing to worry about. Instead, the scandal enveloped Martha Stewart like kudzu. She was eventually prison bound. The golden opportunity for Erin’s green thumb seemed to be wilting away. And to make matters worse, the September 11 terrorist attacks had just happened. Suddenly life in Manhattan had lost its luster.

That’s when Erin decided to do the unthinkable: move back to North Carolina. And not just to North Carolina, but to Garner, less than 20 miles from her childhood home. In 2002 she took over her late uncle’s estate, a 30-acre farm along N.C. Highway 50.

So now we have a farmer whose family thought she was crazy to be a farmer. “You have an art history degree,” they told her. “Why would you do that?” But Erin insisted. “What I wanted to do was create a piece of permanence, and I wanted to create a luxury good that was based on my family farm.” In short, Erin wanted to grow “luxury farm products,” an unlikely trio of words if ever there was one.

Her father, who has a clipped way of speaking and a penchant for telling it like it is, says he was dubious about whether she’d ever yield success from her farming venture. “She didn’t do too well at it,” Noel Weston says. “It’s taken her years to get to the point she’s at now.” With decades of getting his hands dirty, Noel was the counterpoint to the young, free-flowing art history grad fresh from the city. He’d offer advice. He’d float an idea. They would disagree. An argument might or might not ensue. The creative process is messy like that, especially if you want to make money at it. “We’ve been fairly close all along,” Noel says. “She has a mind of her own. I mostly don’t fuss, I mostly just go away. I just leave.”

Here is a farmer who is farming in an unlikely place for a farm. It’s only seven miles from the State Capitol. Within a one-mile radius, there are two Food Lions, a McDonald’s, and subdivisions with vinyl-sided homes and curbside trash pickup. N.C. Highway 50 carries too much traffic for its two lanes. And the farmhouse isn’t a farmhouse at all; it’s a three-story apartment building Erin’s grandfather built in the ’50s using brick from the old Andrew Johnson Hotel in Raleigh.

Erin first dabbled in heirloom vegetables, but in time that wasn’t enough. She went on to raise perennials, but that wasn’t enough, either. Her artistic sensibilities needed constant nourishment. She started to grow trees, and to cut branches from those trees, and to fashion branches from those trees into dashing displays. “People loved them,” she says. “They loved these colorful combinations.”

An idea, nurtured by her father, took root and grew in the form of that quintessentially Southern tree, magnolia grandiflora — the Southern magnolia. Think moonlight and magnolias. Think Steel Magnolias. From the Carolina coast to Galveston Bay, Texas, the magnolia is sturdily postured in the soil and soul of the South. It was Erin’s father who suggested making wreaths out of magnolia branches — what better way to capture the natural essence of a Southern Christmas? But it was the daughter who was dubious now. “For a long time, she didn’t want to do any wreaths,” Noel says. “She said there was too much work in it.” It’s true: The conventional way of making a single wreath, Noel says, could take up to four hours.

What needed to happen was for his daughter to take ownership of the idea. “Whatever idea I may have, she has to make it her idea before it’ll work,” he says. The idea only began to blossom when Erin noticed her friends selling Fraser fir wreaths at the State Farmers Market in Raleigh. “They made several for her and she got gung ho about it,” Noel says. Erin found that money really does grow on trees. “There’s a rich history to Southern magnolias,” Erin says. “So there’s always gonna be people who want Southern magnolias.”

People from well beyond the South want Southern magnolias, too. She’s had orders from the Hamptons in New York, Los Angeles, Dallas, and Chicago. Last year, she received her first inquiry from Europe. She sells wreaths online and at her boutique stand at the State Farmers Market. “I can’t keep them in stock at the farmers market,” Erin says. “I’m struggling to do that.”

Erin likes to say she’s a farmer who “cultivates color.” Magnolia is the main ingredient in her wreaths, of course, but she splashes in sprigs of Leyland cypress and Japanese cedar. She grows 4,000 magnolias on her farm, but by next Christmas she expects to be raising 10,000, most of them on additional land her family owns several miles away. Erin grows a special variety of the tree with leaves that are the color of hot chocolate on the bottom, something normally seen in old-growth magnolias.

The 30-acre spread Erin tends with her father is a horticultural wonderland. At the entrance to the farm, prickly pear cacti and young bald cypress flourish along the fence: Southwest and Down South no longer fenced in by geography, but living together in harmony. In the dwindling daylight, long spouts of water arc over rows of daylilies that her dad grows and sells.

The property is pocked with several ponds where her father raises koi fish. And away on the far side of the farm, set against a horizon outlined with rooftops, are the magnolias planted in neat rows, each tree no more than five and a half feet tall.

Erin and three part-time workers craft the wreaths inside a workshop on the ground floor of her home. As for the green these greens reap: An elaborate ring can run around $225 but can snag as much as $425 online. A simple 12-inch wreath with just magnolia leaves, one not all dressed up with other colors, is $40 wholesale at the State Farmers Market. “On some she tries to have six colors — red, purple, green, yellow — and the combination of six or seven or eight items, it takes infinitely longer to put together,” Noel says. “That’s what makes the expensive ones expensive.”

A decade since she began plowing a new course in life, Erin has harvested art and joy and, yes, luxury from the North Carolina soil she once longed to wash her hands of. Here’s a farmer who dared to look at the land and see not mere commodity, but a canvas for creating works of art. She’s a farmer who cultivates color. A farmer who has brought imagination to farming.

Erin Weston is a farmer.

Bryan Mims is a reporter with WRAL-TV in Raleigh. He’s thinking of hanging magnolia instead of mistletoe this year. His most recent story for Our State was “Dogs of War” (November 2013).