Long before 500,000 bulbs light up with the flip of a switch, before cars line up for miles to catch a glimpse of the dazzling displays around town, before the rest of the state has even thought of decking any halls, McAdenville has been preparing for Christmas. Beginning in August each year, Tim Gibson and his small crew spend six weeks untangling skeins of lights and replacing burned-out bulbs. They might chat or listen to the radio as they unwind wires, but when it’s time to wrap the lights around trees and bushes — more than 200 of them — they work in quiet concentration. For a single tree, Gibson says, it takes three people to string up the lights so that there are no gaps and no way a strong gust of wind can shake them free. Their job — part of a tradition more than 65 years strong — is to make sure every inch of this wonderland sparkles. 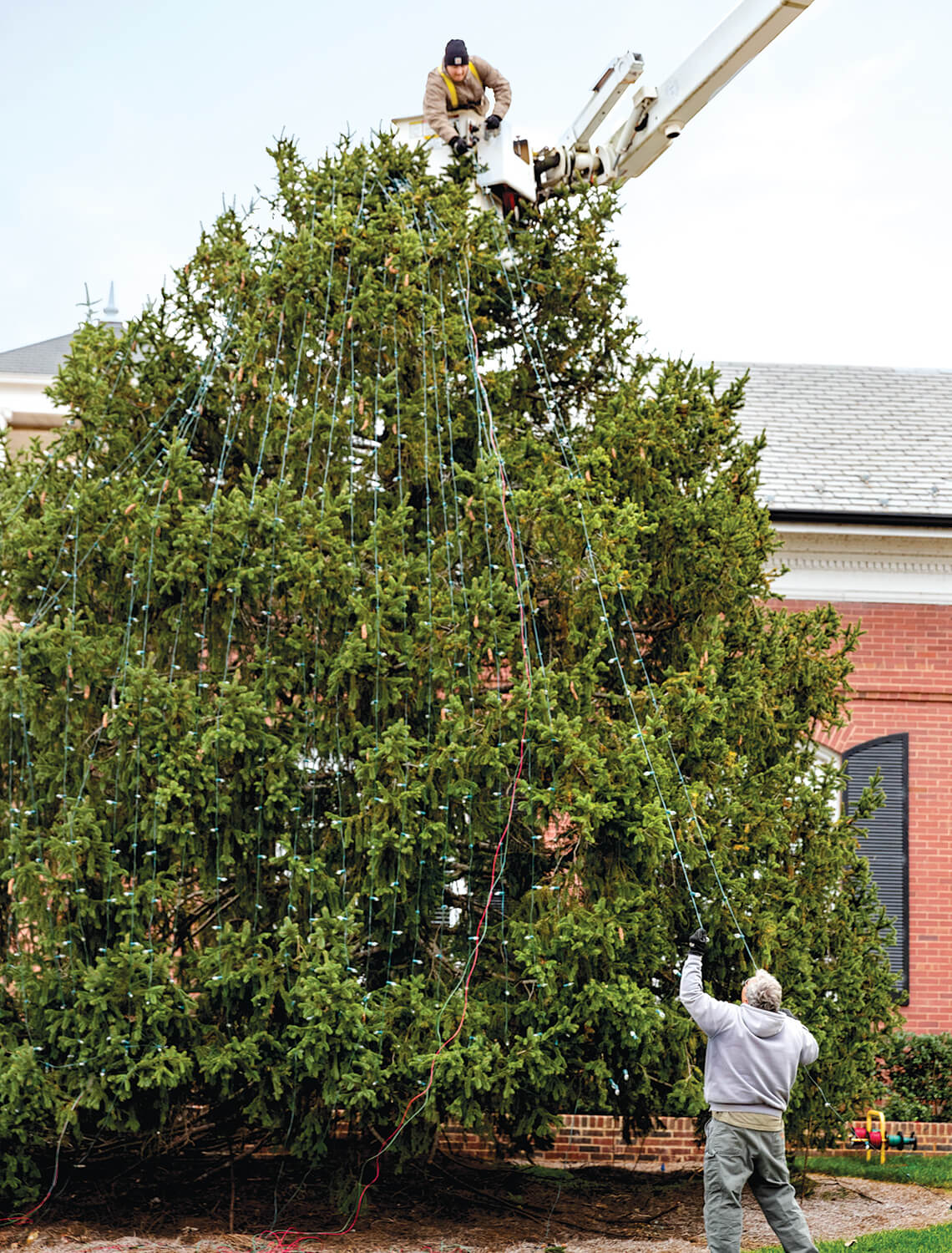 The displays might be smaller this year, but Tim Gibson (above) will work to make the town look perfect. The trees around the lake (below) won’t be lit, but this view remains one of McAdenville’s most iconic. photograph by Charles Harris 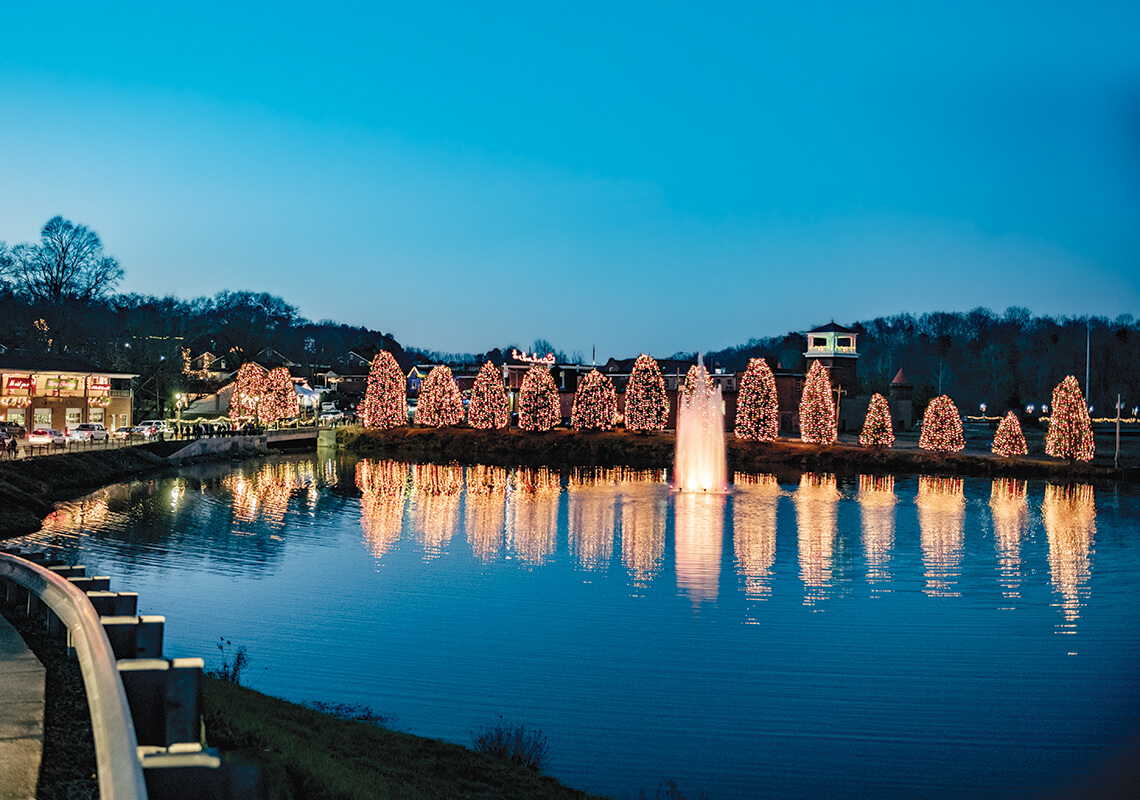 In 1954, McAdenville was a community knit together by and around Pharr Yarns. One day, Harvey “Dick” Roberts, then a 19-year-old fixer at the mill, found himself talking with three coworkers about how they could help the town look a little more festive for Christmas. The group found some old metal rods, which they bent and welded to spell “Merry Christmas.” They wrapped the letters in white lights and set them up on a hill, then hung some stars from the mill tower and strung up a few more lights. It wasn’t much, but William Pharr, cofounder of the company, liked what he saw. “Fellas,” he told the men, “I’ll pay for all that you put up.” True to his word, the mill covered the cost of the lights in town — still does — and Christmas Town, USA, was born. 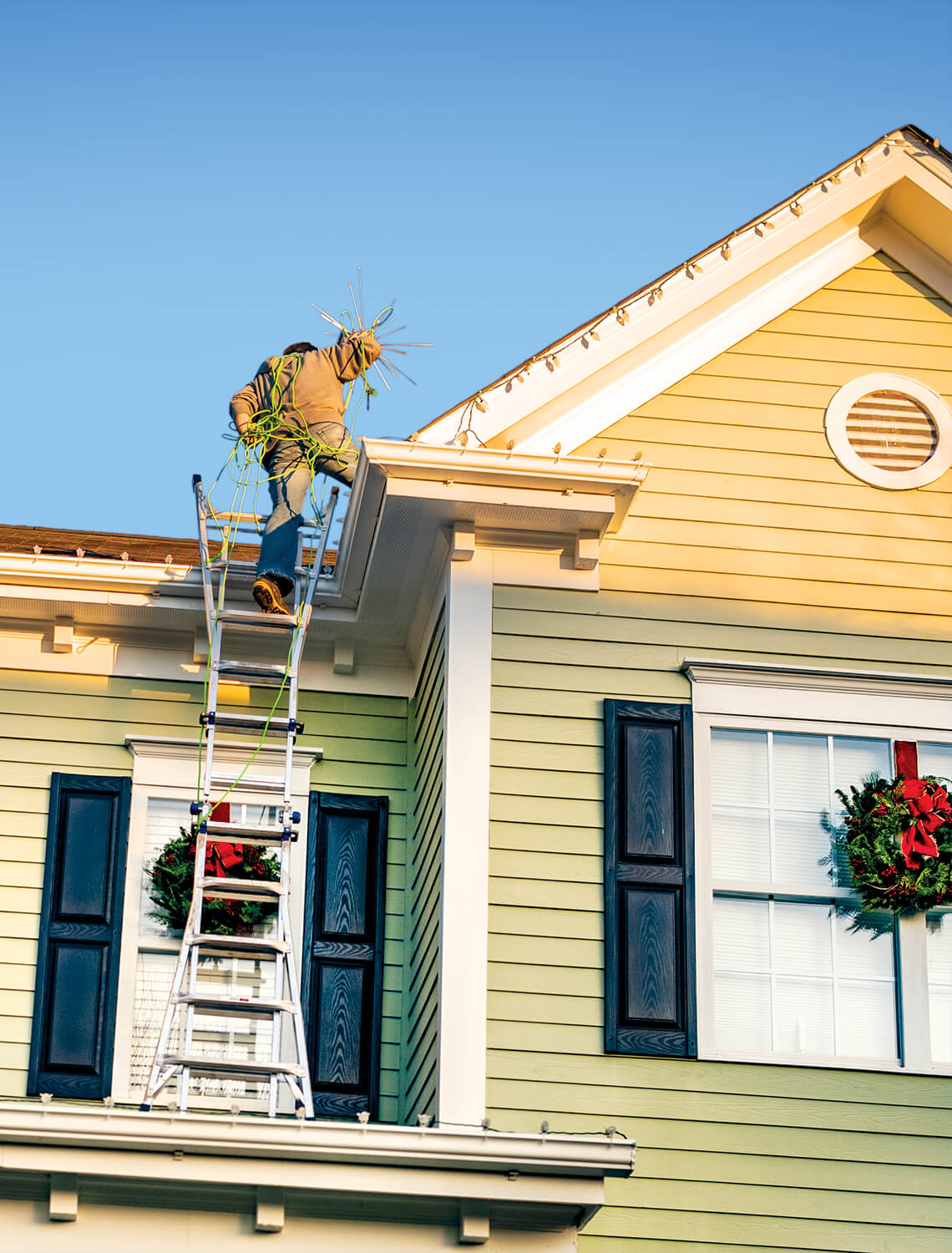 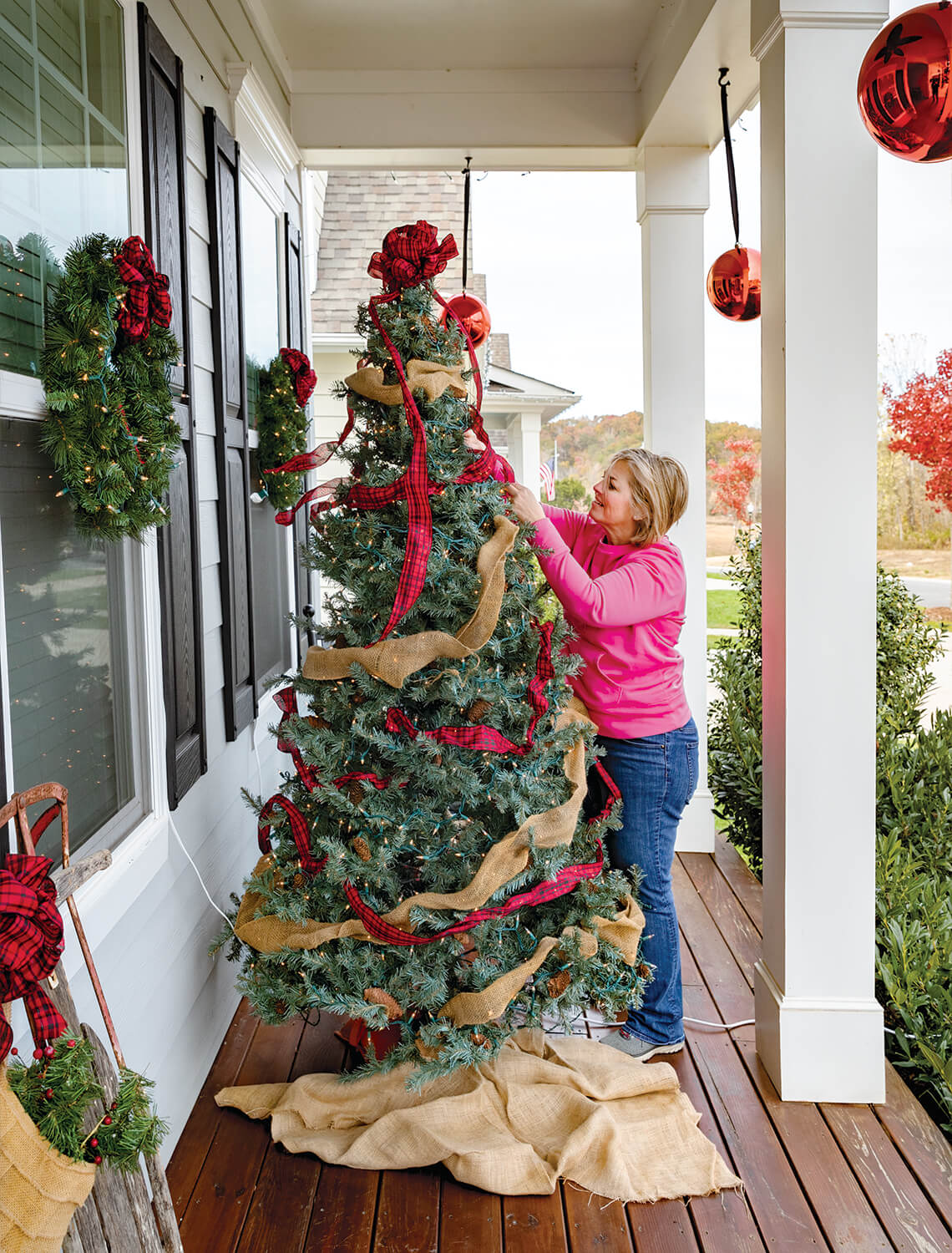 For Pharr, who was deeply committed to the community around the mill, the lights are a fitting legacy. “Mr. Pharr always wanted to do whatever he could to make people’s lives better,” Roberts says. Plus, Pharr and his wife, Catherine, loved Christmas — after the lights started attracting out-of-town visitors, the couple would stand out on their porch and watch the cars go by. From the beginning, Pharr decided that the lights would not be commercialized — they were a gift for families to enjoy together. To this day, the experience remains free, including the hot chocolate and cookies passed out in McAdenville Baptist Church’s “coffeehouse.” And Catherine, Roberts explains, is responsible for the town’s classic holiday look. As the tradition grew, “Mrs. Pharr requested only true Christmas colors — red, green, and white.” 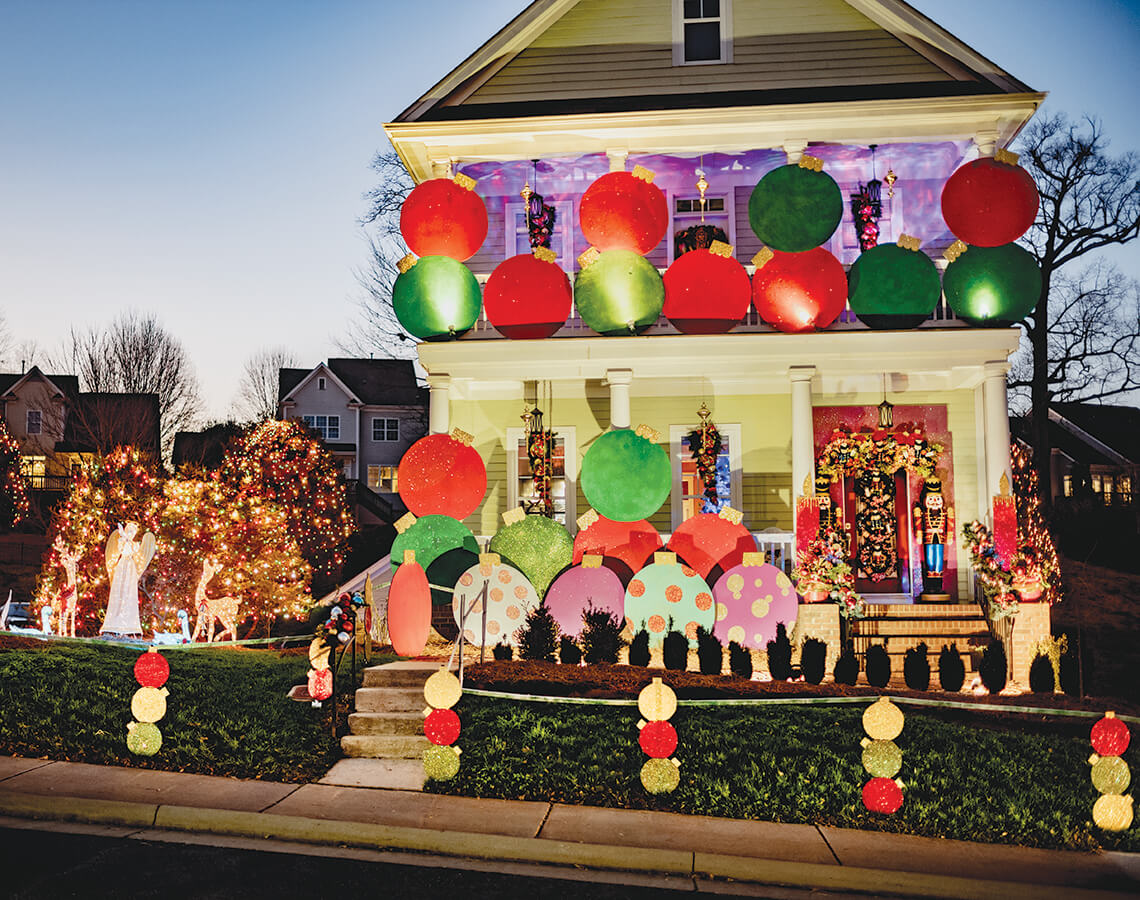 Last year, Kalis Egolf (below, left) and Todd Dickerson trimmed their home (above) like a giant tree — with ornaments of all sizes. photograph by Charles Harris 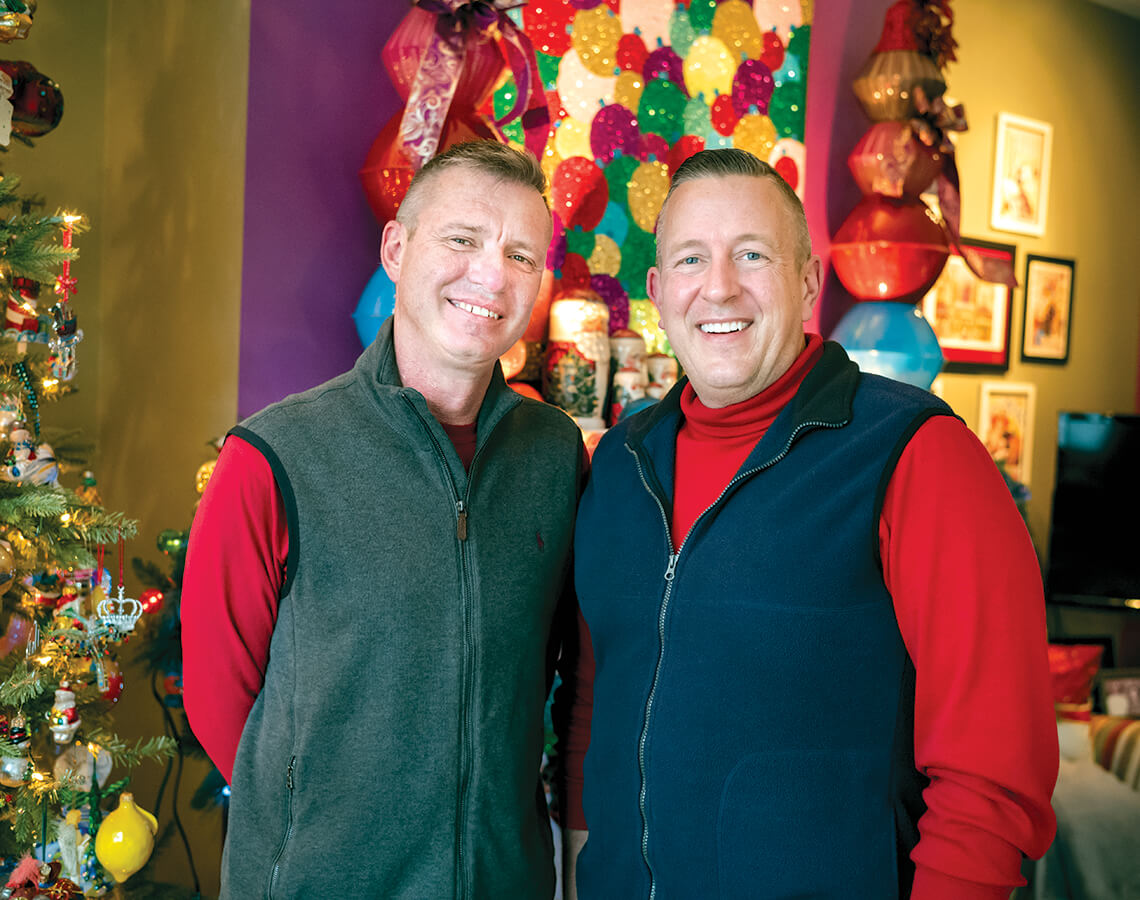 Within a few years, residents started decorating their porches, too. “That’s what sets McAdenville apart,” Roberts says. “No one ever asked the homeowners to decorate, but most everybody participated, and everybody enjoyed it.” In the decades since, the town has welcomed new neighbors, many of whom move to McAdenville because they want to live in Christmas Town, says Ashley Westmoreland, a Gaston County native. She remembers when the decorations on homes were relatively simple, like front doors wrapped to resemble Christmas presents. Now, inflatables and other larger-than-life decorations spill out into front yards. Many neighbors try to add new items each December, making every year bolder and brighter than the last. But that magical feeling that Pharr worked to create has remained a constant. “Christmas has always been a big deal here,” Westmoreland says, “and it just keeps getting bigger.” 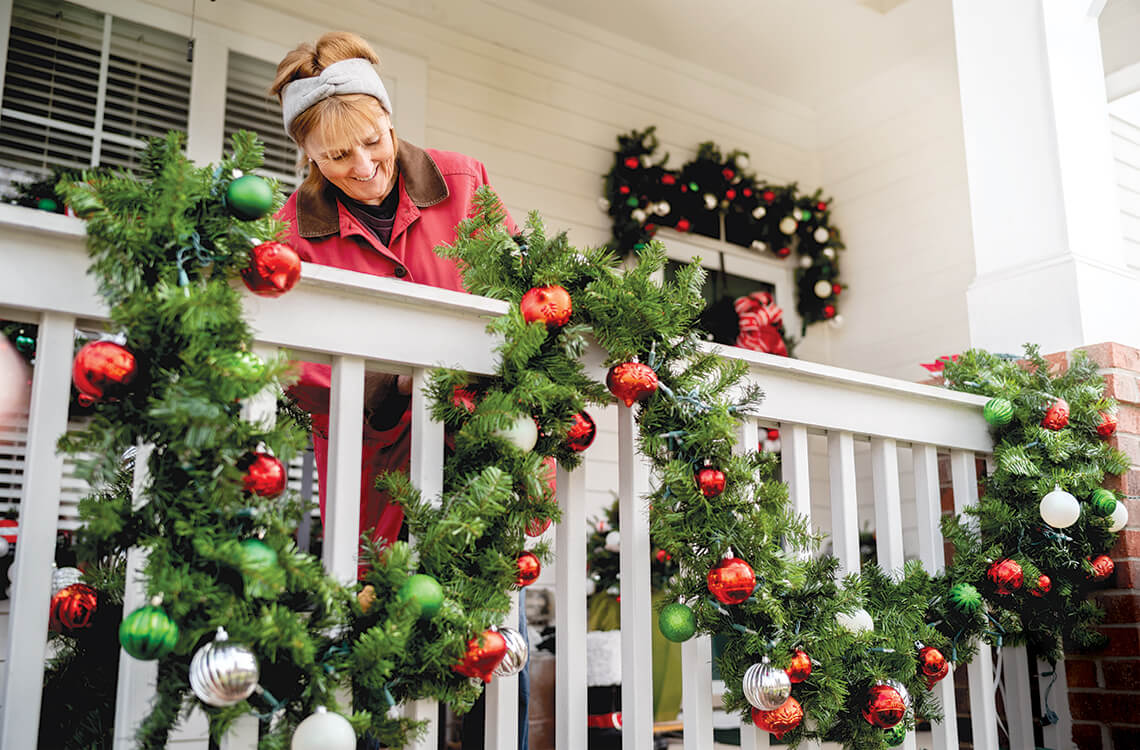 Bobbie Garn’s decorations always include perennial classics like garlands and a pine tree strung with 4,000 lights — as well as something new and different every year. She loves celebrating Christmas in McAdenville. “I think Hallmark should do a movie here sometime.” photograph by Charles Harris

The atmosphere is already festive on the Saturday after Thanksgiving, when the Woman’s Club holds its annual 5K. (This year, it’ll be a virtual run.) In the days beforehand, the club delivers jingle bells to residents to encourage them to cheer on runners, many of whom arrive dressed up for the postrace costume contest. The 5K started in 2012 to raise money for the club’s various causes around town, including college scholarships. “A hundred percent of everything we do goes back into this soil,” Westmoreland says. As the club’s vice president, she sees firsthand how eager McAdenville residents are to help each other — not only around the holidays. “It’s almost like the Christmas spirit, in this town, fills us up all year ’round.” 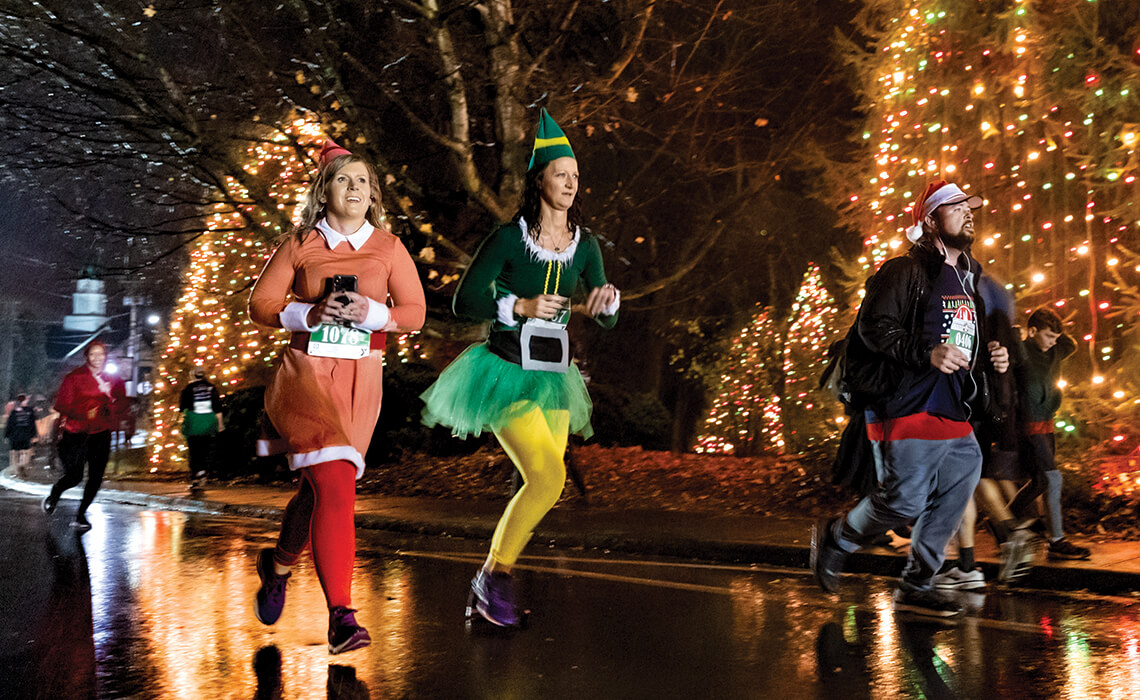 Even a heavy downpour last year couldn’t dampen the spirits of costumed runners in the Christmas Town 5K (above). Before the rain, McAdenville Elementary’s wildcat mascot made the rounds (below). photograph by Charles Harris 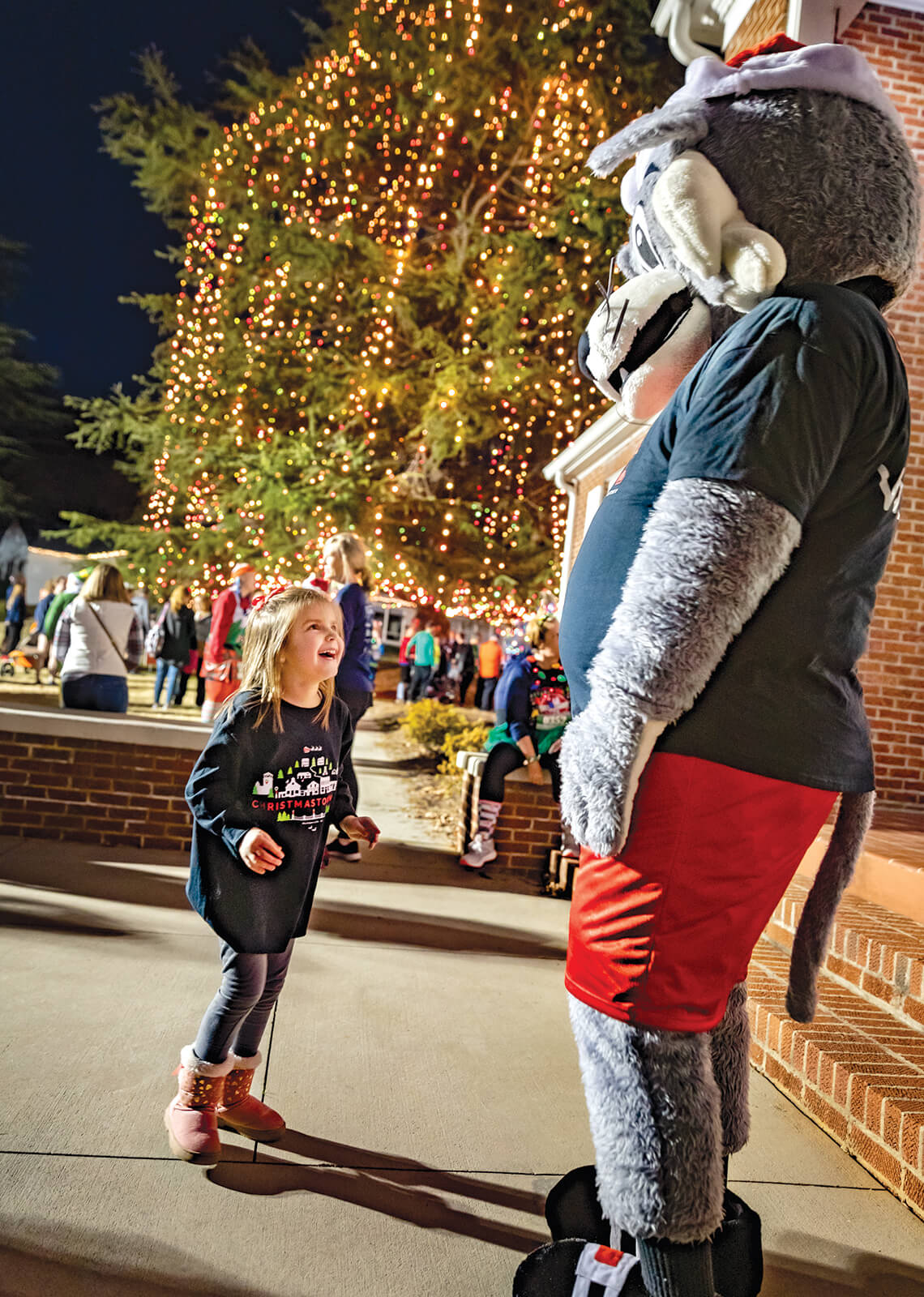 In its early years, Christmas in McAdenville was mostly a local attraction, with a few exceptions — Dick Roberts recalls that in the 1960s, a group of New Yorkers would charter a plane to come see the lights each year. Then, in 1980, Charles Kuralt shined a national spotlight on McAdenville, and people started traveling in from all over. Nowadays, the little town of about 800 welcomes 600,000 visitors each December. Cars displaying tags from every state have driven through. In recent years, McAdenville has become more walkable, and a handful of restaurants and other businesses stay open late to show visitors a little Christmas Town hospitality. 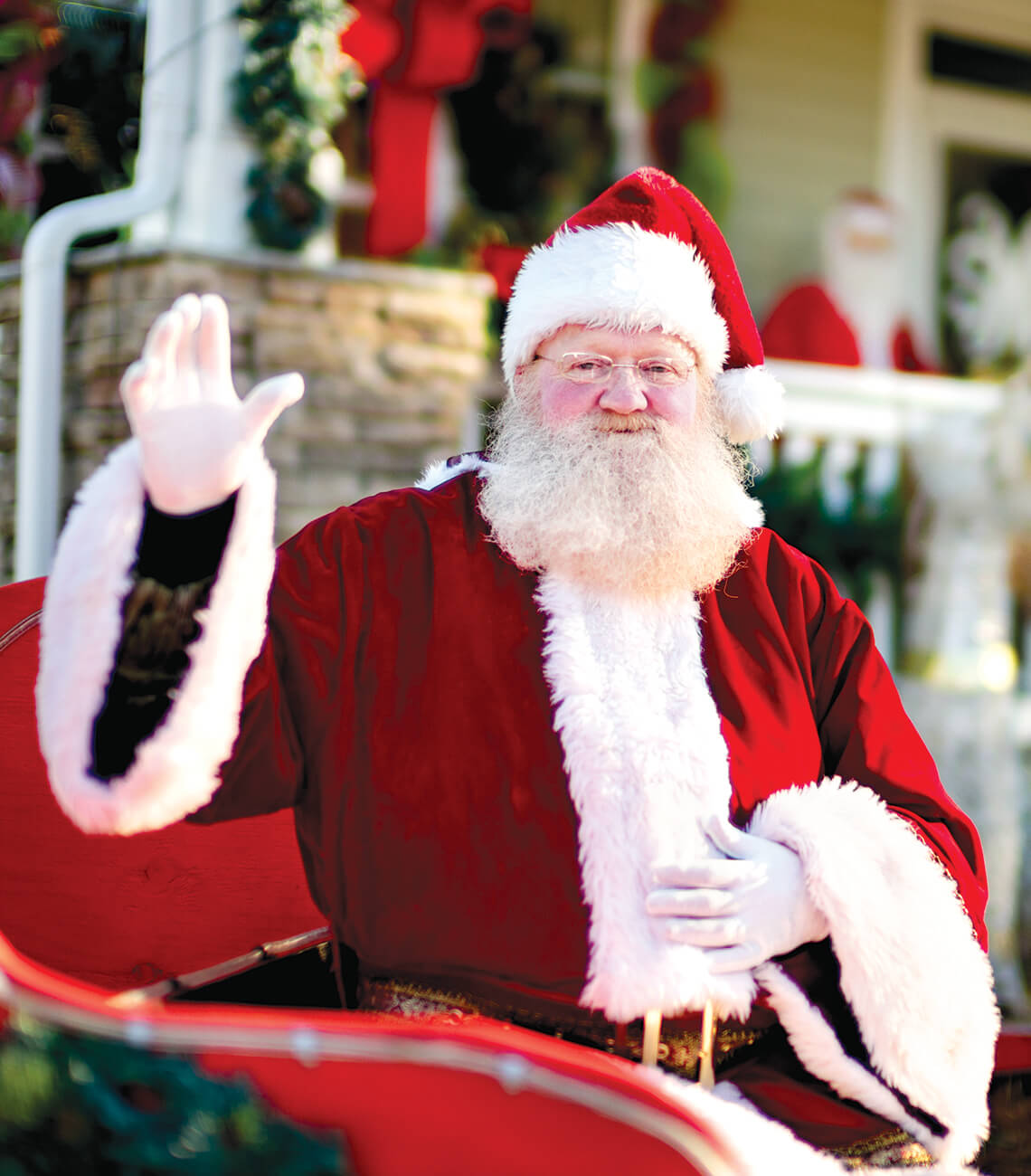 Say hi to Santa and catch some other sweet scenes around Christmas Town. Even Belle the dog was feeling festive last year. photograph by Charles Harris 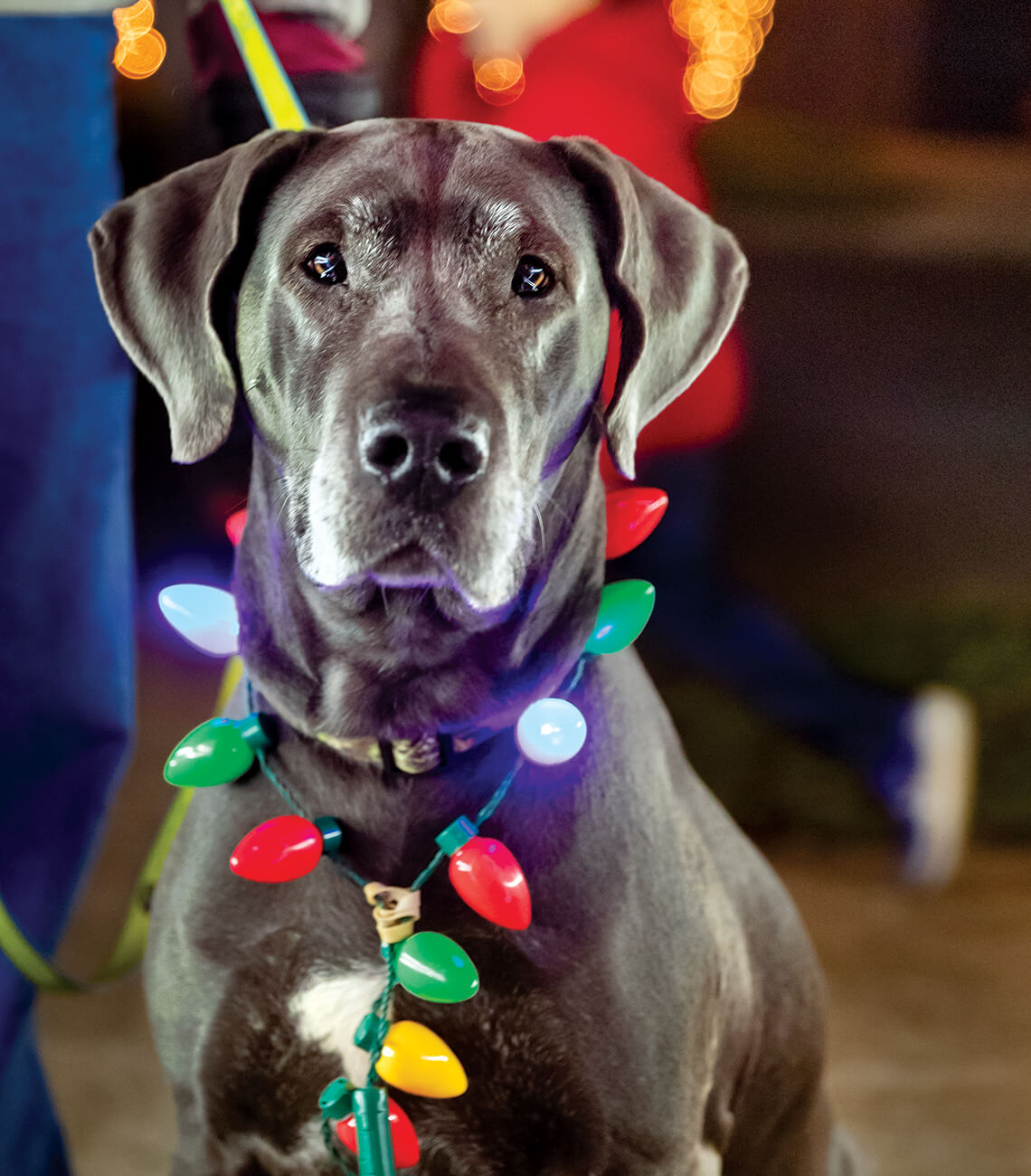 All of McAdenville’s hard work — the tree-trimming and garland-hanging and all the rest — leads right up to the beginning of December. Most years, that’s when Christmas Town, USA, opens with a flourish: One lucky child gets to flip the switch that lights up the town for a delighted crowd. At the same moment, the McAdenville Elementary Chorus starts singing “Here Comes Santa Claus,” and, as if by magic, the big man in red is already on his way, the horses that pull his sleigh clip-clopping down the street. The components of the ceremony remain the same, but the excitement never wanes. And although beloved traditions like the Tree Lighting Ceremony and the Yule Log Parade have been canceled this year, residents of McAdenville are already looking ahead, when gathering together again will be all the sweeter. 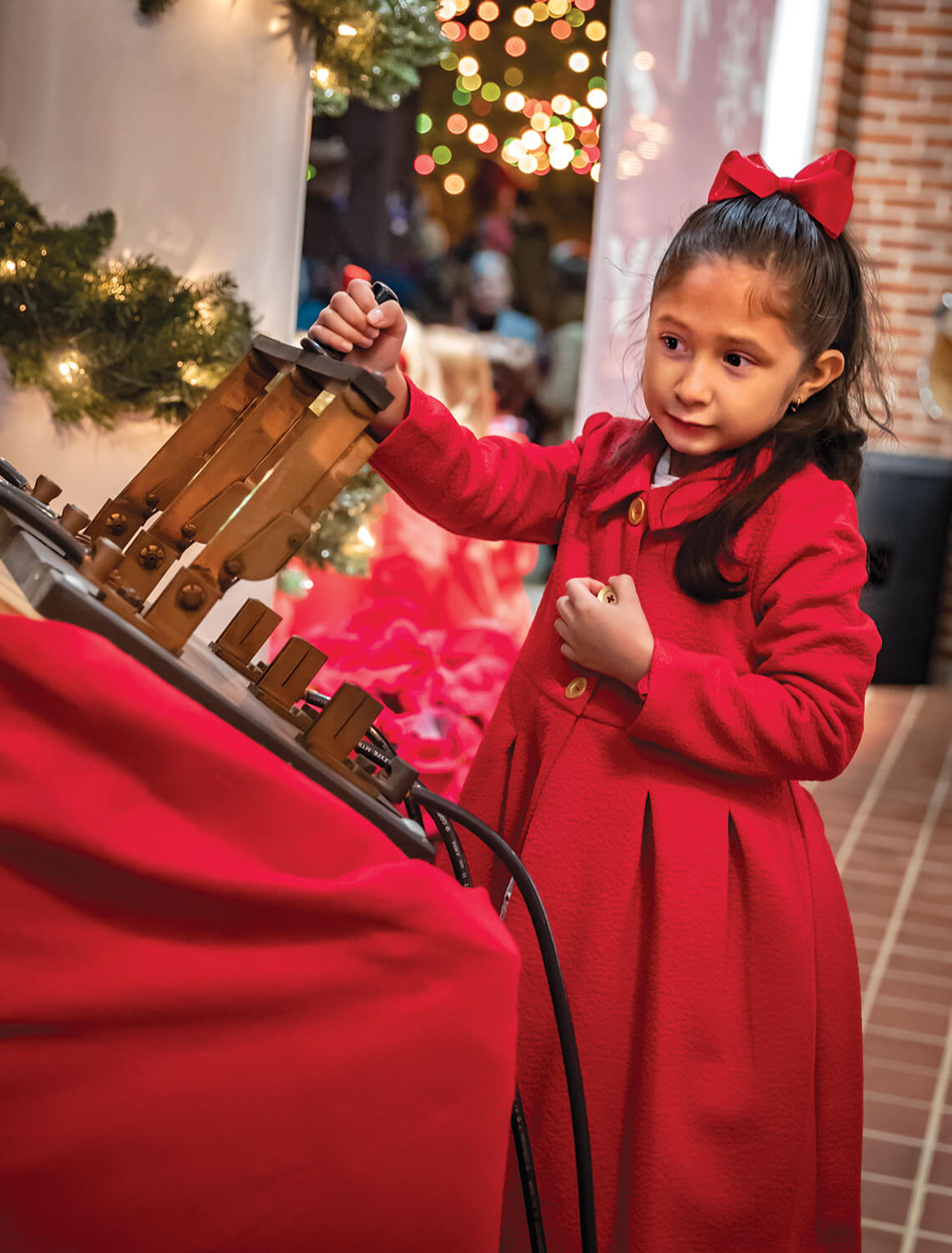 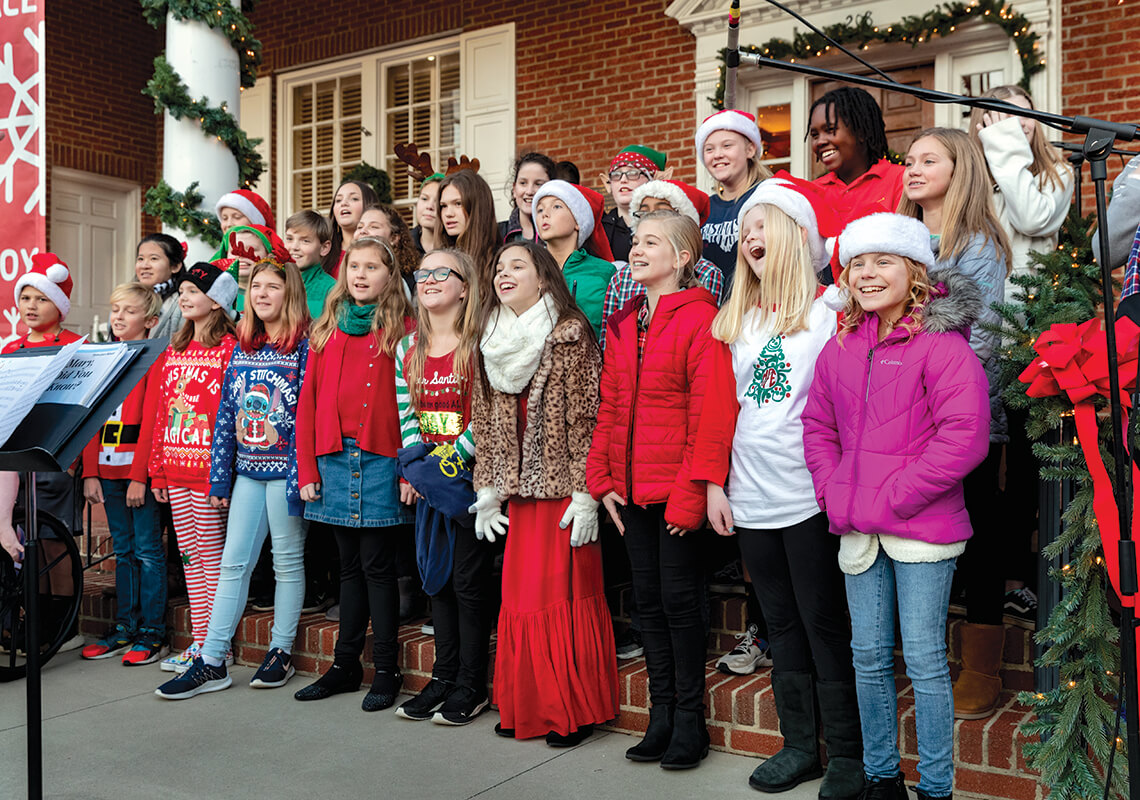 There’s at least one holiday tradition in McAdenville that’s even older than the lights. In the late 1940s, William and Catherine Pharr visited England, where they attended a Yule log celebration and brought the idea home with them. Since 1950, children have pulled a Yule log through town on a special sled, grabbing hold of the long rope handles wherever they can. “It’s not your typical parade,” says Roxann Rankin, who grew up in McAdenville and serves on the Christmas Town committee. “Anyone who wants to can join.” When the parade reaches its destination, the log is burned with great fanfare. For many years, Pharr himself lit the Yule log; now, his grandson Bill Carstarphen presides over the ceremony, but a different family in town is chosen to light the log each year. Though the details have changed, Rankin says, “the tradition is there. Every generation has their own memory of it.” 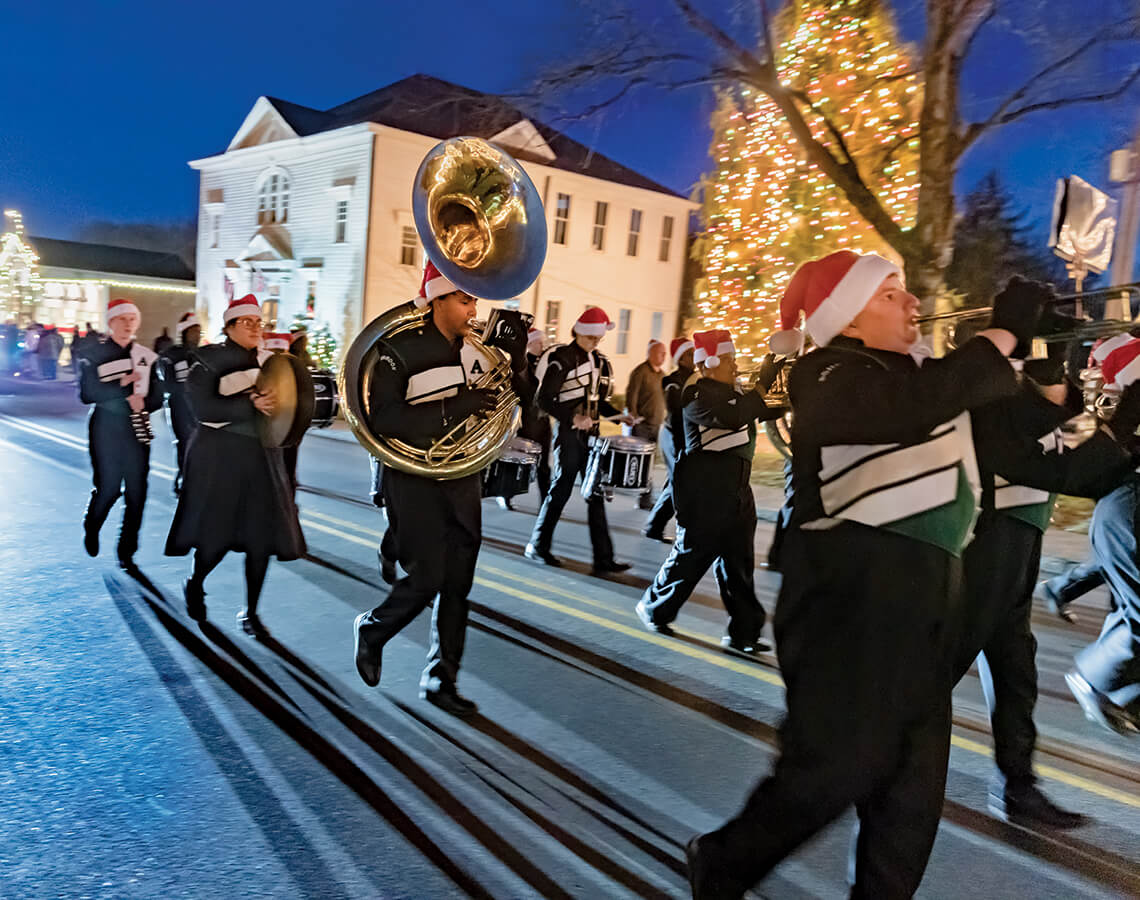 Every year, children pull the Yule Log through town on a special sled, escorted by marching bands like the one from Gastonia’s Ashbrook High School (above) and anyone else who wants to join. The parade route ends at Legacy Park, where the log is burned. photographs by Charles Harris 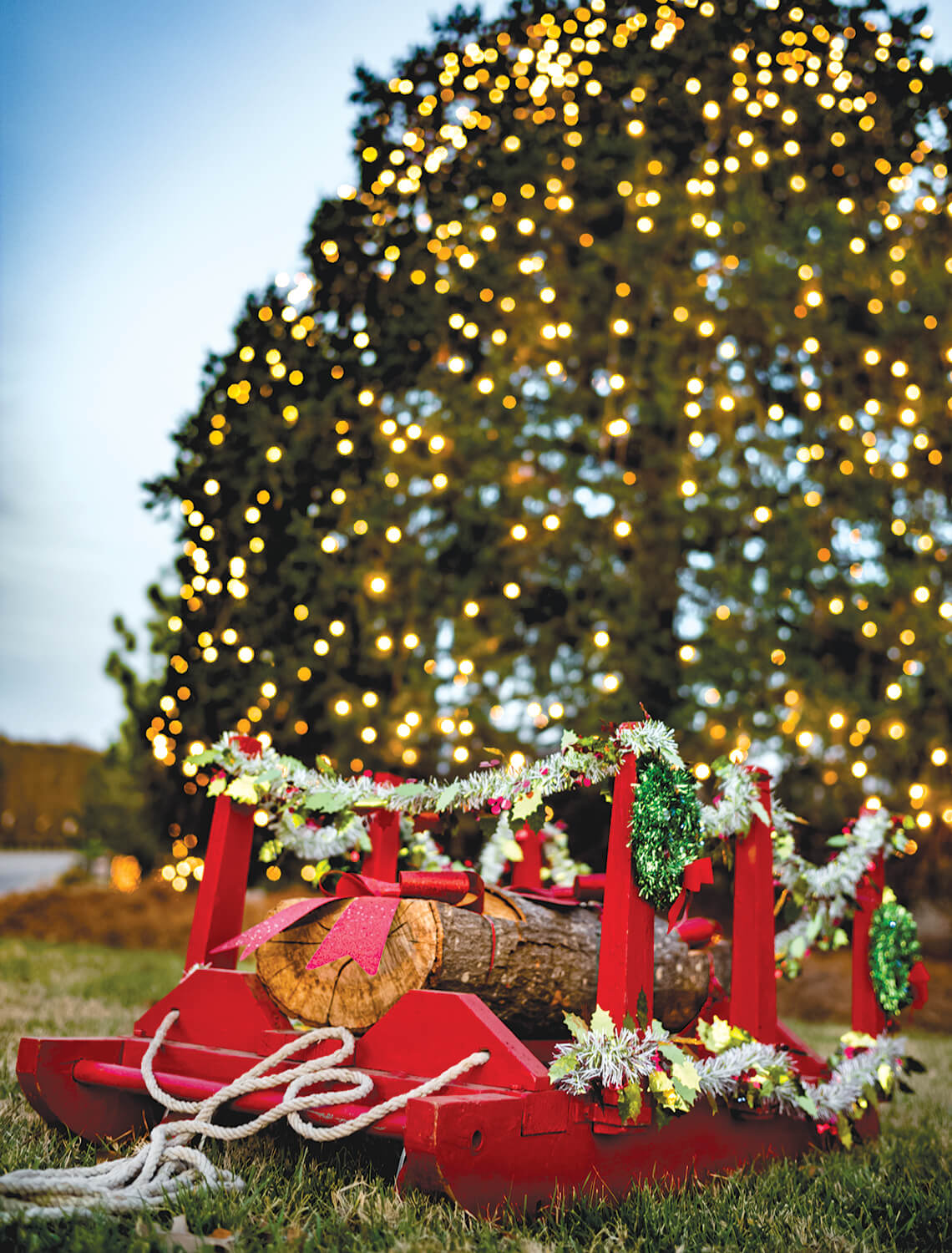