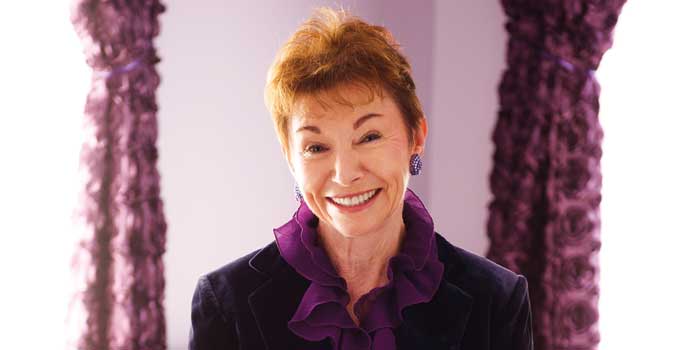 Editor’s note: This story originally appeared in the April 2013 issue.

Ellen Davis once took a wrong turn and drove into the rest of her life.

She ended up the owner of one of the most unusual restaurants in the South, a place that scored AAA’s Four Diamond rating for 16 years running. She also ended up as the owner of a restored Victorian-era mansion with a historic-landmark designation in Charlotte’s Fourth Ward neighborhood.

But in 1978, Davis was just taking a friend sightseeing uptown.

Working on a dream

Once the residential heart of Victorian Charlotte, Fourth Ward had decayed into a crime-ridden shell after the city’s rush to the suburbs in the 1950s and ’60s. But in the late ’70s, nostalgia left over from the U.S. bicentennial led to a groundbreaking experiment in urban pioneering that brought national attention. People restored crumbling old houses through sweat equity, and young urbanites moved in.

Davis never dreamed of being a part of Fourth Ward. A single mother with a grown daughter, she owned The Artichoke, a gift shop with three locations. She lived in the Coventry Woods suburb, far from uptown.

Then she took that wrong turn and ended up going the wrong way on North Church Street. When someone yelled to warn her, she pulled into a church parking lot to turn around and came face-to-face with the McNinch-Liddell House.

Built in 1892 by Vinton Liddell, it was once owned by Samuel Sylvanus McNinch, a mayor of Charlotte in the early 20th century. It was a classic Victorian-era Queen Anne, with shingles on the second story and clapboards on the first, a wrap-around veranda and bay windows. It was the kind of house little girls draw with big boxes of crayons.

And it was empty, following the death of McNinch’s daughter, Mattie.

Davis recalls her first sight of the house as pure love.

And she recalls her first years of living there as a nightmare. The slate roof leaked. When it rained, she dashed to the attic with pots and pans, and emptied them out the upstairs windows. One chimney leaked so badly, water poured down to the first floor.

The house had 10 fireplaces, nine with the original tile facing, all with ornately carved mantels. It had its original wooden paneling, built by Karl Bitter, who also worked on the Biltmore House. But every mantel and door had to be taken down, put on sawhorses, stripped, and refinished.

It took almost 10 years to make the house livable. The neighborhood joked: “If Ellen Davis ever finishes painting the McNinch House, that will be the signal for the start of Armageddon.”

So what was Davis going to do with 6,000 square feet of house once she finished it? That part of the story is what makes the McNinch House different from just another house tale.

Davis put her house to work.

“You don’t own a restaurant, it owns you,” she says. “And you don’t own an old house, it owns you.” So Davis, who had never cooked professionally and swears that she knew almost nothing about food, decided she’d make the first floor of her old house into a restaurant and live on the second floor.

As soon as the kitchen was restored enough to work in, she started a catering business. Then came the restaurant.

It made sense. A food business was a good fit for the neighborhood, says Dennis Rash, a Fourth Ward pioneer himself. He helped with the redevelopment as president of community development for NCNB, the forerunner to Bank of America.

“We always knew with the proximity to the center city that there would be places that would be a little commercial,” Rash says. “Mixed-use, you would call it. In most other parts of the world, it was the way people lived.”

Charleston and New Orleans have plenty of old houses that are now restaurants. But Davis, he says, “took it to something that was several notches above what we might have imagined.”

Davis had seen friends who owned restaurants get beaten down by the daily grind of offering a full menu. So she decided to offer a set menu, with limited choices. But she offset that specificity by making it personal, letting dinner in the house become a special experience. Today, the house’s flyers call it “highly choreographed multi-course dinners.”

When you want a special place to celebrate — birthday, anniversary, big business deal — you call the McNinch House, and they arrange a special dinner, with up to 10 courses for parties of two to 50.

Dinner at the McNinch House isn’t cheap — the 10-course chef’s tasting menu is $109 a person before wine, tax, and tip. But it’s a dining experience unlike anything else in Charlotte.

In the beginning, though, Davis admits she had no idea what she was doing.

For her first dinners, she sent the plates into the dining room and then hid at the door to listen. When she heard silence, she thought it was bad news. Eventually, she figured out that when plates go to a table, it’s normal for people to be silent while they look and take their first bites.

“Until I learned that, I was devastated every night,” she says.

She tried taking cooking classes at Central Piedmont Community College but decided she could learn better on her own. She hired kitchen workers with experience, so they could teach her.

“Every day I tried to learn something,” Davis says.

She built a team with remarkable longevity for the hospitality industry: Keith Cochran, the general manager, started as a busboy in 1993. His brother Corey, the dining room manager, started in the same job in 1997.

The wine steward, Anthony “Wes” Wesley, graduated from the Windows on the World wine course in New York and worked at the Lamplighter, a legendary but vanished Charlotte restaurant, before joining McNinch in 2002.

Her executive chef, Chris Coleman, has been here for almost nine years. And Davis’s daughter Beth is “chief cook and bottle washer.”

Even though Davis’s manner is down-home, the food at her restaurant is sophisticated, with duck breast and rack of lamb making regular appearances in the seasonal lineup.

Dennis Rash credits McNinch House with helping to bring TransAmerica Reinsurance to Charlotte from Los Angeles in 1997. The team fell in love with McNinch House and swore there was nothing like it in California.

It’s the combination of food and setting, the elegance of the menu and the architectural charm, that make it special, he says. McNinch House and Fourth Ward go together.

Davis prefers not to share her age — we’ll just say she’s beyond common retirement age — but she keeps her hand in restaurant operations. And she still loves to peek downstairs when guests arrive.

Then she usually microwaves her dinner and takes it upstairs to her private rooms, where she has high ceilings and a little porch looking out on the Charlotte skyline. In the mornings, when she comes down for her newspaper, she stops and reads the comments in the guest book.

“They write such wonderful things,” she says. “People are so surprised. They get a tour, and then the food starts, and it’s pretty. When they leave, they’re so happy.”