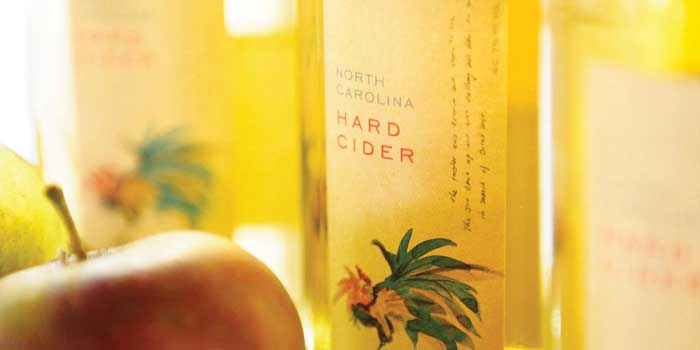 The apple growing tradition has a long history in the United States, from the mountains of North Carolina to the orchards of Oregon. When we think apples in our state, we think grandma’s apple fritters and lattice-topped apple pies. But apples have a history of uses that includes much more than dessert.

Fermented apple juice, or hard cider, was one of the country’s most popular drinks until the mid-19th century. As Prohibition took hold, the beverage declined. But today pockets of producers, particularly in the Northeast and Northwest, are giving cider a renaissance. In 2006 one of those transplanted artisans from the West Coast decided to produce hard cider in North Carolina. Sean McRitchie began crafting a dry, semi-sweet cider at McRitchie Winery & Ciderworks in Thurmond, and five years later he sold out an entire season’s supply.

Sean came to North Carolina in 1998 to help start Shelton Vineyards, a family-owned winery in Dobson. His father, Bob, is a retired winemaker and a former winemaking teacher at Surry County Community College.

Several years after moving to North Carolina, Sean and his wife, Patricia, purchased land in Thurmond to begin their production. They noticed a hole in the local cider market and considered it an opportunity.

“Cider is fun,” Sean says. “And apples are beautiful and they grow well here.”

McRitchie cider is a blend of apple varieties from the last year’s crop. Sean and Patricia are beginning to grow apples on their property, but most of their supply comes from the Brushy Mountain region.

As the liquid goes through the pressurized tanks on site, the cider develops a bubbly effervescence. It’s a marriage between a bottle of beer and a glass of wine. Sean says the cider is a good complement to Southern cuisine, particularly pork dishes.

“We are very different from some of the mainstream ciders you see in the grocery store,” he says. This dry, sharp cider is traditionally found in northern France but is gaining popularity here. McRitchie cider is now available on tap at bars and restaurants throughout the state. Last year customers bought all the cider Sean produced. The unlikely combination of a French-style cider and a West Coast cider producer might just go a long way in making North Carolina apples popular for more than pie.

Matt Tate is the content supervisor at the Florence Morning News in South Carolina.