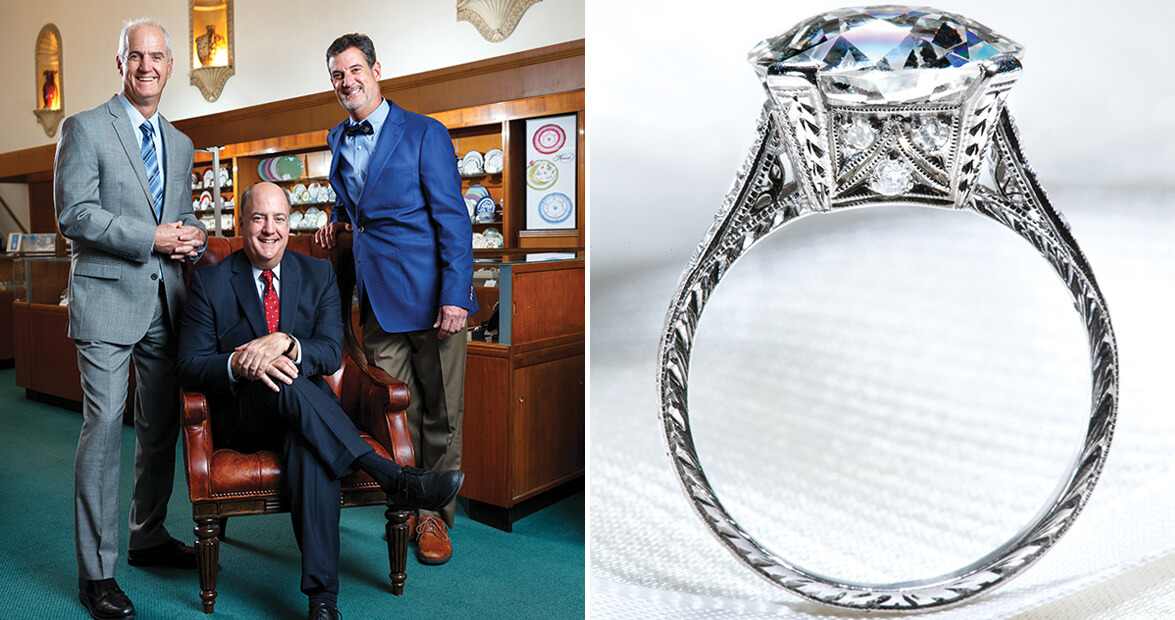 Feature image, above: The Schiffman brothers, (from left) Arnold III, Lane, and Vance. Right: A vintage diamond in a new ring — the 4.8-carat gem was cut in the early 1900s, and is set in a platinum Art Deco-style mounting.

Lane Schiffman is laughing. “Diamond guys have no margin,” he says. Profit margin, he means. “Vance” — the middle of the trio of brothers currently running Schiffman’s Jewelers, who’s in charge of diamonds — “gets a bag of pistachios for Christmas.” Lane’s still laughing. “Arnold” — who oversees estate and other fine jewelry — “maybe gets taken out to dinner. I get to go to Pebble Beach.” Lane’s chortle is what’s known as the last laugh.

Lane, the youngest, has always been the advertising and marketing guy. In the ’80s, watches morphed from basic Bulovas to big-time branding; think of the billboards with celebrities pushing Piagets and Patek Philippes and other timepieces whose pronunciations you’re unsure of. It’s not Lane’s fault that the high-dollar side trips fell into his lap. When the brothers were younger, they gravitated toward different parts of the business. The worm turns, and the evolution of a family business sometimes happens through sheer serendipity. Other times, as Lane says, he and his brothers just “go into a room and decide we’re committed and aren’t going to let this get away. We just whip each other’s butt and go have a beer together.” He’s still laughing.

Serendipity had a major role in Schiffman’s founding, too. In 1893, a young immigrant watchmaker named Simon Lazareth Schiffman moved to Asheville, where the surroundings resembled the Black Forest of his native Germany. While Simon began to build his reputation as a watchmaker, his brother’s steam laundry failed. Simon, who had cosigned for the equipment, moved the business to Norfolk, Virginia, sold it, and headed for home with a pocketful of cash on the train, on a route that made customary stops in Raleigh and Greensboro, where he’d need to change trains to get to Asheville. 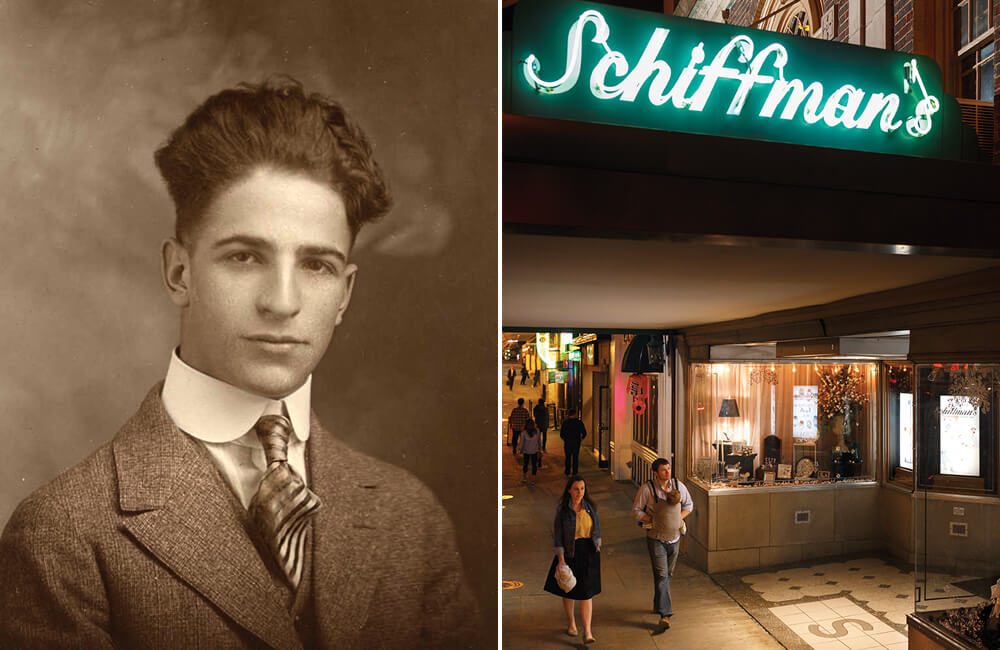 Downtown Greensboro consisted of two blocks back then. Like any traveler with a layover, Simon got off the train to stretch his legs. He wandered down the street, and came upon a bankrupt jewelry store for sale. Simon was all of 19 years old, but he had a skill, and that pocketful of cash. He bought the business and put the inventory on the street, along with a sign: TAKE AT YOUR OWN PRICE. THIS WILL NOT BE OF THE QUALITY THAT WE WILL SELL AT SCHIFFMAN’S.

Today, Schiffman’s Jewelers is the oldest of the old-school downtown Greensboro businesses.

Simon’s son, Arnold, took over in 1919, and with Greensboro’s population shifting northward, so did Schiffman’s — four or five blocks, despite warnings that no lady would walk on the side of the street where saloons were located.

Undaunted by a disastrous fire, “Mr. A” rebuilt at the same location on Elm Street, opening in 1937 with a store full of baubles — and modern conveniences: Air-conditioning. An electric-eye front door. An open second-story balcony where Arnold III, Vance, and Lane still meet every morning at 8 a.m. A savvy marketer, the first Arnold began advertising on TV in 1952. “He was a Rotarian, very social,” Lane says. “If he needed to pay a bill, he’d walk down to the Jefferson-Pilot Building, or grab some doctor out of his office and say, ‘Your wife needs this.’ ”

In turn and in time, Arnold groomed his two sons, Tony (Arnold Anthony Schiffman Jr.) and Harry (Harold), to take over the store. Harry eventually sold his shares, moved to Manteo, and opened a marina. Tony became sole owner in 1975, but “Mr. A” continued to work daily in the store until he was 93.

Schiffman’s Jewelers is the oldest of the old-school downtown Greensboro businesses.

Families have a way of expanding, though, and Tony’s three sons — Arnold, Vance, and Lane — had by then appeared on the scene. “I rode my banana-seat Schwinn Sting-Ray down to the store on Saturdays,” Lane recalls, where he and his brothers rinsed the ammonia from the spray bottles used to clean the glass cases, refilled them with water, and chased each other around the basement, squirting. Whatever high jinks were taking place downstairs, Tony’s focus was to keep his boys in the business, so he began expanding the family enterprise by purchasing high-end jewelry stores with a heritage and traditions similar to Schiffman’s. Wisely, he maintained these companies’ original names and unique personalities within their communities. The first store outside of Greensboro was purchased in 1965 in Asheville, and today, Schiffman’s has 10 stores from Virginia to California. The “youngest” store outside of Greensboro was started in 1897 — older than Schiffman’s itself. The “oldest,” in California, started in 1852.

The brothers all went to Appalachian State, but still worked summers and holidays in the store. “At Christmastime, you got out of school, you came down to the store to help,” Lane says. “You made bows in the basement until your hands bled. I can wrap better than anyone here.” Still, “Dad had a very clear routine for us: You graduate, you get your gemologist degree, then get your butt in a store. Dad made you a manager of a store which you were in no way qualified to be, but he surrounded you with nice people, 67-year-old ladies, who knew what was going on. We had to cut our teeth and learn to sell and screw up.”

Arnold, Vance, and Lane don’t have titles. “We’ve never gone there,” Lane says. Are there ever problems? Of course. “Dad would say, ‘I had a board meeting in the shower this morning, and this is what I decided,’ ” Lane says. “Whereas I have to answer to these two clowns, and they say the same of me. We still have trouble — we get into it.” Which is when they call in Coach Pete, as they refer to their family-business consultant and facilitator, who has helped the brothers draft a constitution.

Because there’s Gen 5 out there, too. “Gen 5” is the brothers’ nickname for their children — eight of them, from age 28 down. “But there’s no entitlement just because your name is Schiffman,” Lane says. “We keep it professional.” Each child must have another job for at least two years and prove themselves. Even then, when they return, the job description includes running a vacuum.

Lane leans back in his chair and glances through the two-way mirror (this is a jewelry store, after all). Even in a family business, things change. Lane’s grandfather kicked salesmen out of the store for not wearing a coat and tie. “Dad ran the business differently than we run it,” Lane says. “Every generation changes the model to reflect the times.”

Nevertheless, Arnold, Vance, and Lane Schiffman still have those high family standards, which probably explains why the three brothers are a fourth generation selling to a third-generation clientele, and can tell a son buying an engagement ring stories about his father and grandfather. A golden gauntlet has been thrown down to Gen 5 of Schiffmans. And you can probably make a safe bet that somebody’s going to work hard to get the last laugh.