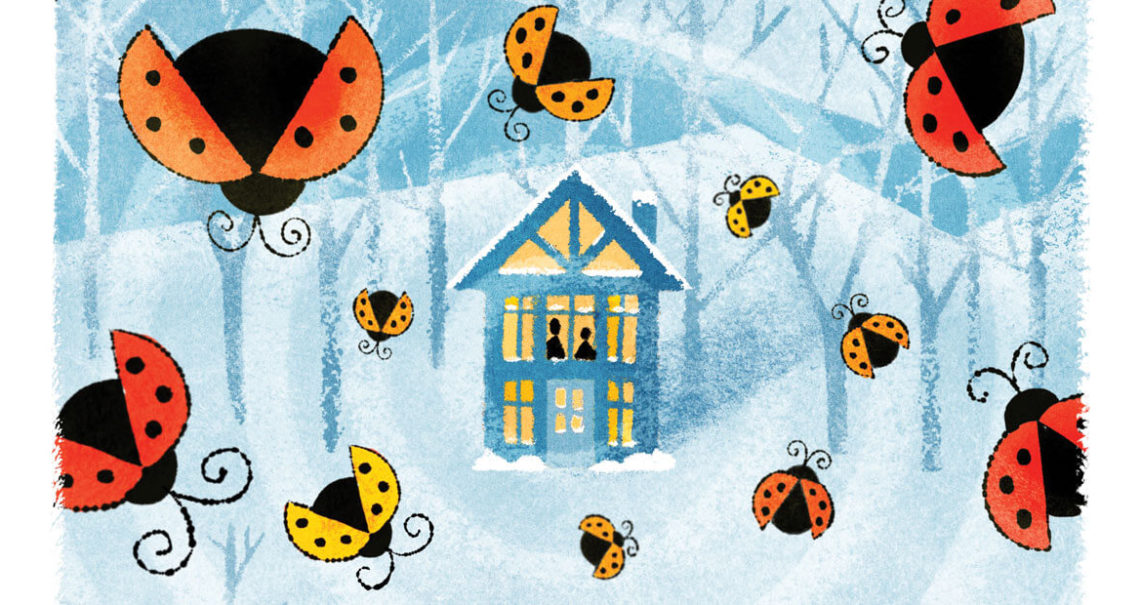 As I sit on the back porch of my weekend cabin in Sylva, overlooking the bare and foggy forest below, I sip a glass of wine and enjoy the quiet solitude of the woods.

Instead of hearing a babbling stream or the soft rustle of leaves, when I close my eyes and rock back and forth in the porch swing, all I hear is a faint but persistent dink! dink! dink! coming from inside the cabin. I soon learn that my housemates and I aren’t the only ones who’ve made a home for the weekend in this three-story mountain getaway, each floor decorated with a collection of playful black bear figurines, wolf paintings, and quilts tacked on wood-paneled walls. As it turns out, the hundreds of ladybugs in here have an appreciation for North Carolina cabin culture, too.

As the dinking continues, I go inside and find dozens of slow-moving, slightly dazed ladybugs (correct term: lady beetles) recovering from flying full-throttle into our cabin’s ceiling light. The dinking, it seems, is the sound of the insects’ tiny round exoskeletons colliding with the glass. It’s a problem that the cabin’s owners warned us about. A binder in the kitchen that contains essential information, like emergency phone numbers and the WiFi password, devotes almost four pages to the multicolored Asian lady beetle, compared to only two pages on trash disposal and preventing bears from accessing said trash. (Sample warning: “Ladybugs are a way of mountain life! Unfortunately, they will find their way into the cabin … it happens every year in western North Carolina.”)

Not that we mind sharing our cabin with our lady beetle friends. They aren’t roaches, flies, or mosquitoes, after all. They’re not disease-carrying vectors. There was a particularly cantankerous one in a popular children’s book, but even The Grouchy Ladybug became un-grouchy by the end of the story. So when a ladybug falls onto our arms from a mid-flight collision with a lamp, or whizzes past our faces as we brush our teeth, we don’t swat it away. We’d have to be some kind of monster to kill a ladybug, right? 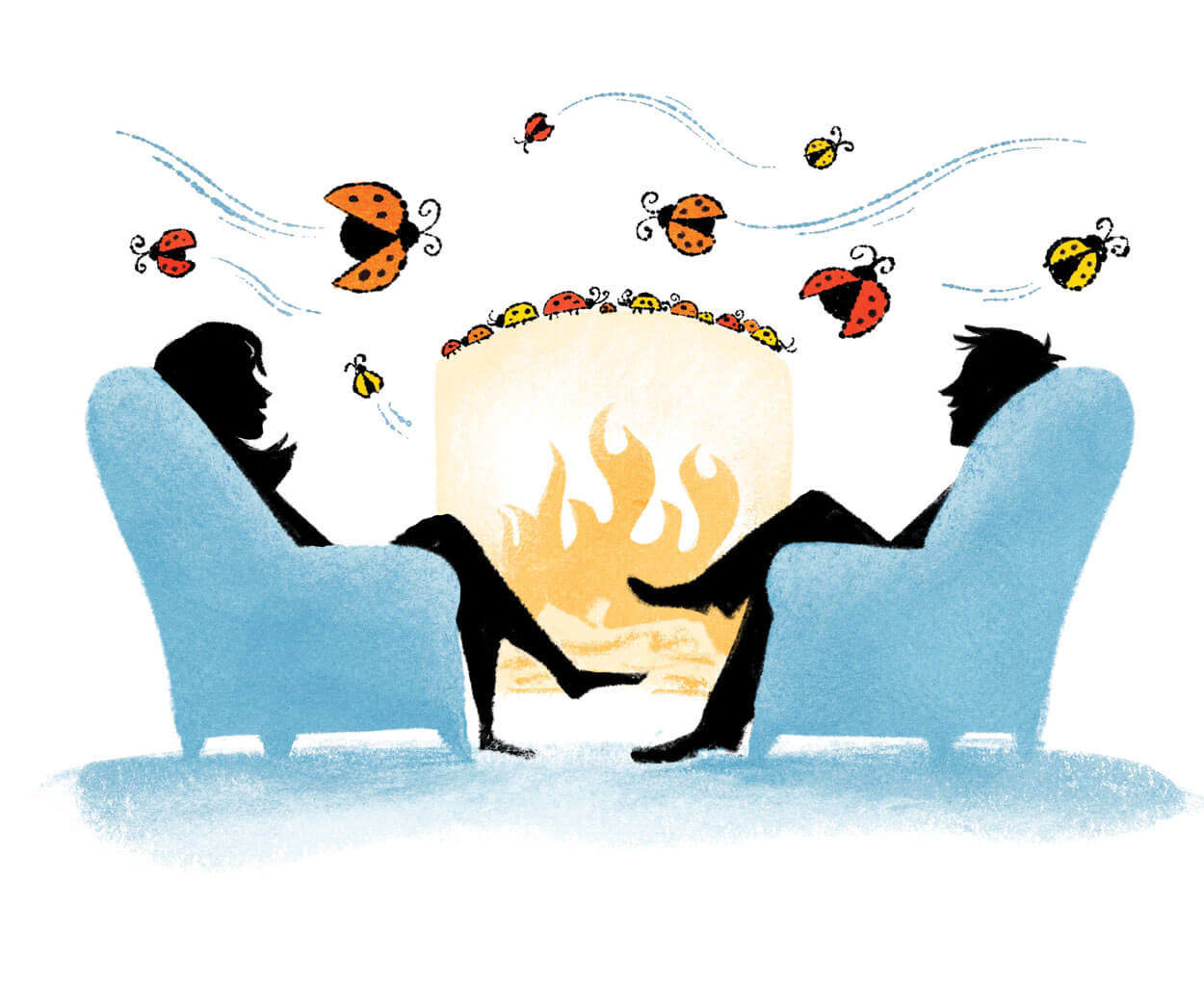 Lady bugs love a cozy spot, especially in the winter, just like us. illustration by Ed Fotheringham

“We’re not going to eradicate them,” Hannah Burrack, a professor of entomology at North Carolina State University, says of the ladybug invasion in the cabins of western North Carolina. “They’re gonna be out in the environment, and they’re gonna find some nice, cozy space like your attic.” And, really, who could blame a bunch of ladybugs for flying in from the cold and snuggling up in a warm cabin for the winter?

Burrack says that the insects cluster together during the cold season, which is why we’re sharing our mountain cabin with hundreds of lady beetles and not just one or two. In essence, we’ve disturbed the winter slumber of a metaphorical den of bears — except that these creatures are way cuter than bears.

Who could blame them for flying in from the cold and snuggling up in a warm cabin?

“We see them in cabins in the fall and winter because that space was probably unoccupied,” Burrack says. “And then you turn the heat on. The reason they’re moving around is that someone has come in and woken them up a little bit.”

The multicolored Asian lady beetle was introduced to the United States in 1916 as a biocontrol agent in California’s farmland, and later in North Carolina to control populations of a variety of pests, including crop-eating aphids. It wasn’t until the 1990s and early 2000s, though, that North Carolinians started to notice lovelinesses (that’s the adorable and proper term for large clusters of the bugs) in cabins and homes.

“People would get annoyed that there were hundreds and sometimes thousands,” says Burrack, who remembers her grandmother vacuuming up ladybugs after turning the heat on for the season.

What brought on this latest beetle boom? That’s less clear. “It’s one of those things we have to take our best guess with,” Burrack says, noting that it could have stemmed from changing weather patterns or an increase in the populations of different aphid species.

Whatever the reason, it’s hard for us to dismiss the rouge-hued bugs in our cabin as pests. The lady beetles aren’t here to harm us, after all; they merely came in from the cold, just as we did. We choose to share our cabin with them, cozying up together until warmer weather arrives.