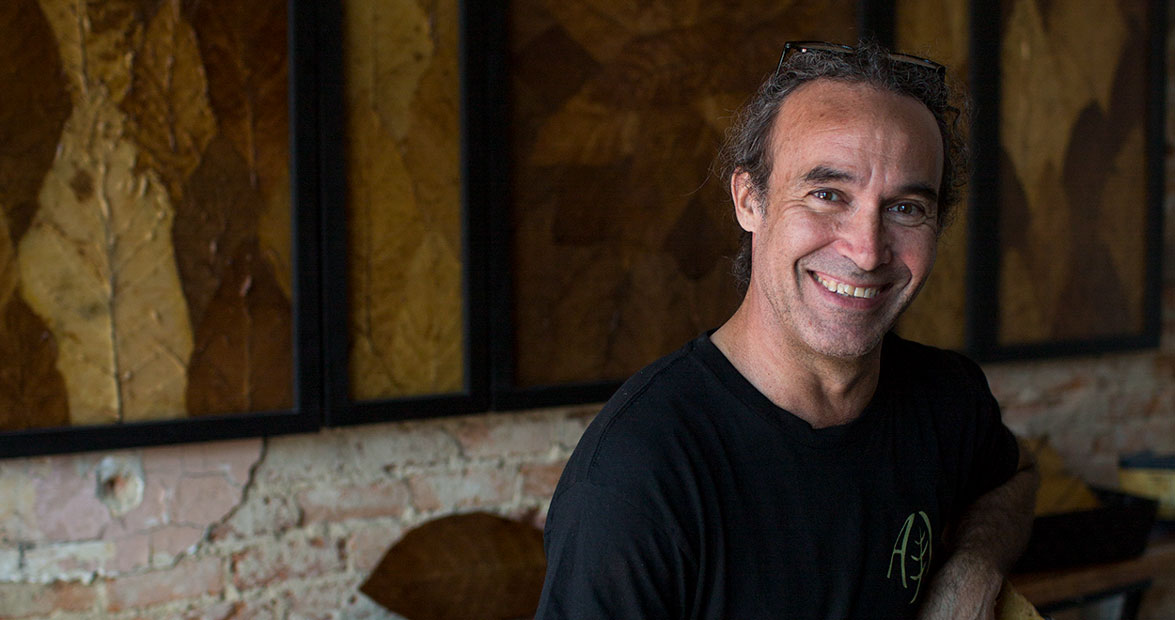 There’s a delicate balance between creating hand-crafted products and producing standardized ones. Sebastian Correa does a bit of both as the operations manager of Artisan Leaf, a tobacco leaf resurfacing company best known for producing furniture and gifts with the Brightleaf leaves for which Wilson’s tobacco market was once famous for.

Most of Artisan Leaf’s customers gravitate toward its 36-inch and 42-inch round tables. Correa can either resurface an old table, create a table dropover, or work with regional furniture makers to build one from scratch. The company also creates everything from wall panels to coasters to ornaments and home decor that employ a variety of tobacco leaves. While the unique designs of Artisan Leaf’s one-of-a-kind pieces capture the eye, it’s the history tied to them that holds your attention.

Our State sat down with Correa to learn how Artisan Leaf is adding a new chapter to tobacco’s storied history.

OS: How did the idea for Artisan Leaf come together?

Correa: George Newsome, one of my two partners, is my oldest friend. A few years ago, he had a local craftsman make a bar for his office, and they decided to incorporate tobacco leaves. I was living in New York at the time, and he sent me a picture of the finished product. I showed it around, and everyone replied, “Where can I get this?” People were going nuts over the bar in the photo. I only knew what the interest was in New York, but that was enough for me to want to start a company, and George felt the same way in North Carolina. We planned the business for two years, and now, we’re three friends — George, who connects us with tobacco farmers; myself, who makes the products; and Reggie Harrison, who sells the products — pioneering decorative tobacco.

OS: What are some of the challenges you’ve faced making art out of this unconventional medium?

Correa: The most difficult part about making art with tobacco leaves is actually finding beautiful leaves. No one grows tobacco for its aesthetic qualities, so I have to scrape and dig for usable leaves. Also, the product is a little taboo — most people are getting the leaves to make cigarettes, not furniture panels. But I like that aspect of it. We’re creating a new industry.

OS: How do you determine which leaves to purchase when sourcing from local farmers?

Correa: Tobacco leaves are like wine. With wine, people say things like, “2017 was a great year, but 2016 was too much rain.” The same factors apply with tobacco leaves; the year of the crop is as important as the type of leaf. Then there’s altitude, landscape — I have to consider many factors. Most of the tobacco I get now is probably from within a 50-mile radius of our shop. I have only a couple of weeks to get enough leaves to last me through the year.

OS: What do you enjoy most about making products for the business?

Correa: The two best moments are when I mentally commit to a design and when I see the finished product. It’s really difficult to get started because each leaf’s position is dependent on the one before. It can feel like I’m planning forever until I finally just commit. I’ll work like a horse with blinders on, but when I get to the end of leafing and step back, I realize, Oh, my God, this is going to look really good. Then, once I’ve finished covering the leaves with epoxy, I experience it again. I go from, Dude, it’s gonna be awesome, to, Yeah, it is awesome.

OS: How does your target market in North Carolina differ from the customer base that you’re attracting nationwide?

Correa: They’re two totally different markets. Here, it’s a historical market. We have local customers whose families were in the tobacco business for centuries, and grew up on family farms. Some even have family leaves, laminated in plastic, that they’ll bring in for projects. I love using their tobacco to make something that they can keep as a family heirloom and preserve the leaves forever. Outside of the tobacco belts, I think the uniqueness of our products gives us the ability to market them as luxury items. I like to say that it’s easier to get a Lamborghini than it is to get one of my tables — while there’s a Lamborghini dealership in almost every major city, we’re the only decorative tobacco company that I know of.

OS: How does your location in Wilson play a role in Artisan Leaf’s success?

Correa: I think Artisan Leaf is successful here because we’re a creative company that’s able to straddle the past and future, since we built our business around a historically relevant product. Wilson is reinventing itself as an artsy little town. As the city moves forward and grows culturally, downtown will undergo a transformation, and I believe that our timing is perfect. Artisan Leaf ties together what the city could be with what it was. A lot of locals are proud to see what we’re doing.

OS: Artisan Leaf was founded in 2014; what lies ahead for this relatively new company?

Correa: Long-term, I’d like Artisan Leaf to do more wholesale work, expanding with custom fabrications in the luxury market. I’d also love to eventually start a nonprofit branch of the company. I want us to do more than just create a pretty product; I want to give back to the community. The most important thing Artisan Leaf can do moving forward is plant a seed. I want people to realize that there are other things that can be done with tobacco besides smoking or chewing it, and I hope that we help reinvigorate the tobacco industry in eastern North Carolina.