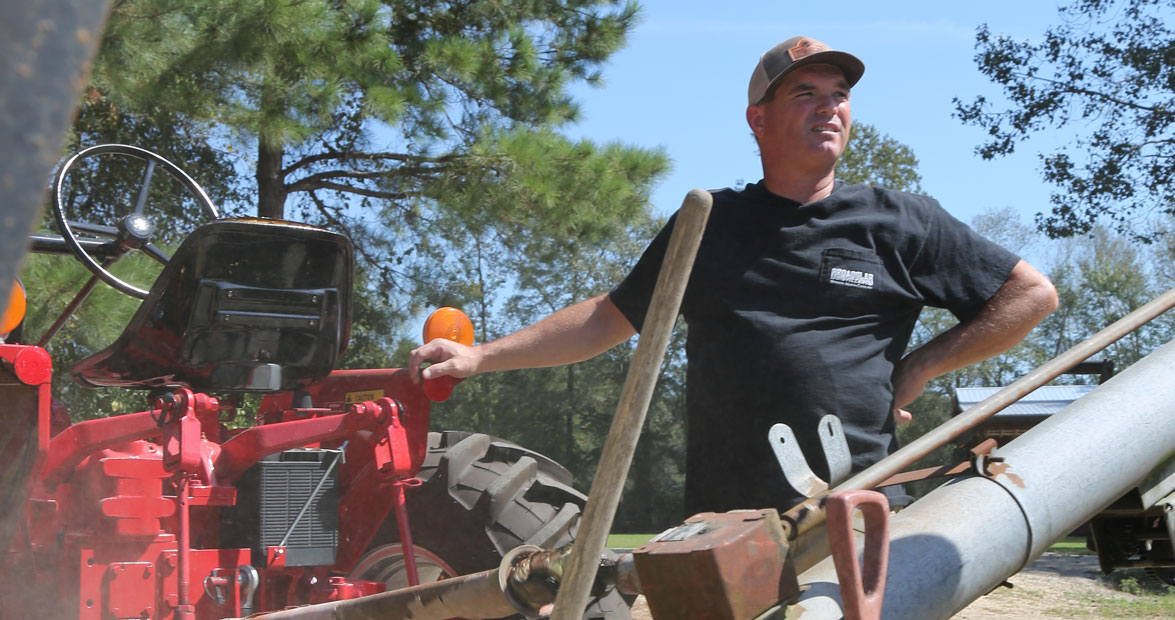 Jeremy Norris knows all about the old whiskey stills out on the land. About the ditches, dug by hand by his ancestors before there were backhoes. About his great-great-grandfather, who used to load his homemade whiskey onto wagons bound for Fayetteville, and his grandfather, who was busted for making moonshine by federal agents in the 1950s. You might say that Jeremy, the owner of Broadslab Distillery in Benson, located on a farm that’s been in his family since the 1840s, is fulfilling his destiny. Long ago, Jeremy’s kin learned that growing corn brought in a little bit of money, but converting the corn into liquor could bring in more. When Jeremy joined the farm and began working on a small produce operation, he quickly realized that there was a way to make the business more viable. “Distilling to me is just an extension of agriculture,” Jeremy says. “It’s a challenge. It’s a way of life.”

Today, Jeremy uses the family recipe — with a few tweaks — to create (legal) moonshine at Broadslab Distillery. And while he’s beholden to the traditional way of doing things, he also isn’t afraid to take a few risks for a delicious product. “That’s the main thing — making something that has character,” he says.

Our State sat down with Jeremy to learn more about his process at Broadslab and the “dirt-to-bottle” liquor he creates.

OS: How did you get your start as a distiller?

Norris: I grew up right here on my granddaddy’s farm outside of Benson. We raised produce and sold at a roadside produce stand — and that was before they put the interstate in, when NC Highway 50 was the major route to the beach. We got a lot of tourist traffic coming by us, which made our little farm sustainable. But when they opened up the interstate, that kind of killed the traffic, and the tourist business dropped. My granddaddy mentioned to me, “You know, someday, when you’re old enough, you should entertain the thought of putting in a moonshine museum.” So that was the first thought. Later in life, once I actually bought some of the land and joined the farm, I tried to farm it on a very small scale. I realized very quickly that that was a big mistake. So I started looking for a way to justify keeping the farm and the land and staying engaged in agriculture in a small way. It kind of led me back to what my granddaddy had said. And I wound up in the distillery business.

OS: How did you first learn about making whiskey?

Norris: I learned a lot about agriculture on the farm. And I learned how to make whiskey just by my granddaddy talking about it and telling stories about the experiences he had when he was a bootlegger back in the ’50s.

OS: What is the whiskey-making process?

Norris: We do it from dirt to bottle here on the farm. We grow corn, and once we’ve made the crop, we go out and harvest it. We put the corn in grain storage and look after it all winter. Then, we carry it to a malt house where we hydrate it, rake it out, and germinate it, which is the malting process. Then we dry toast it and mill it before it comes to the distillery. Once it gets to the distillery, everything is weighed out according to the recipe my granddaddy gave me. Everything is as unique and old-school as it possibly can be.

OS: What does it mean to make whiskey the “old-school” way?

Norris: You don’t rely on technology. You keep it simple. We stick to the original rules and do it how it was done a long time ago. What defines it is making a quality product in a small batch. Putting a lot of care and passion behind it. This whiskey is hands-on from start to finish. It’s not just a “staple” brand. It’s more.

OS: How does your process differ from your grandfather’s?

Norris: One day before we got up and running, I asked him, “What do you think I should make? I want to make something truly authentic and unique.” And he said, “Well, I used to make two different kinds of liquor. I made one to sell and one to drink.” And what he meant by that is the one they made to sell, they didn’t put the labor, the care, and the time into it like the one they’d make in small batches for themselves to drink. The one they made for themselves was a little smoother, a little more well-rounded, had a little more care. Now, that’s what we make to sell. I’ve tweaked things from what my granddaddy did.

OS: What does it mean to you to be working on the same land that your ancestors worked on?

Norris: The most rewarding thing about what I do is getting to see the crops grow, the seasons change. My passion comes from history. It’s something that’s been in my family for a long time. There’s been a lot of blood, sweat, and tears here over the generations. I grew up making my living here, and now I’m doing this. I think it defines Broadslab.