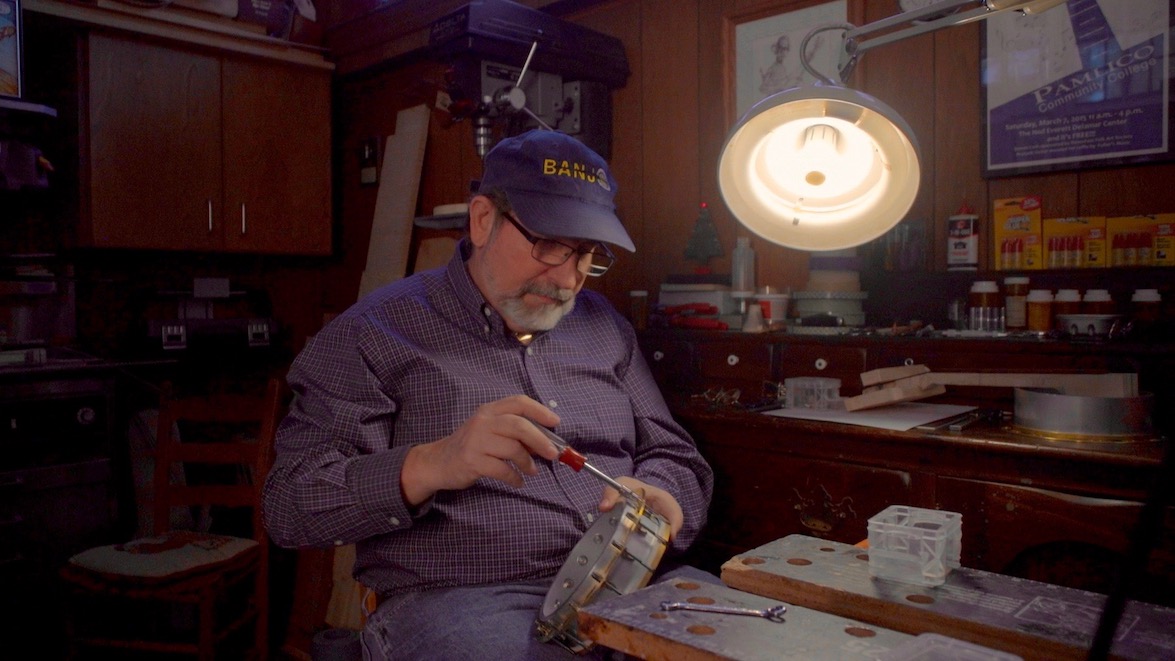 It only takes 200 square feet, some sketched-out designs, and a little patience for Marvin Walker to create something special. For Walker, banjo making is bigger than a craft; it’s a part of his identity that he claims proudly — from the license plate displayed on his car that reads BNJOMAKR, to the gold banjo necklace that he made and wears tucked under his shirt.

If you wanted to order one of his banjos, you’d be hard-pressed to find a telephone number or email address to contact Walker — which is a choice, not an oversight — on his website. “I’m not trying to do this as a living,” he explains. In fact, many of the banjos — which would retail for several thousand dollars — Walker instead gives away for free.

His banjos are as well suited to the hands of children picking their first notes as they are to the experienced hands of bluegrass legends like Earl Scruggs — Walker keeps the picture of Scruggs playing one of his instruments private. Read on to learn more about how, and why, Walker is shaping North Carolina’s bluegrass music scene in Our State’s interview below.

OS: What inspired you to start playing and making banjos?

Walker: I’ve always liked the sound of a banjo. I walked into a music store one day, and there was one hanging on the wall. I was looking at it, and the lady came up to me and said, “Do you want to buy a banjo?” And I said, “I don’t know how to play,” and she said, “Well, we give lessons.” A hundred and fifteen dollars later, I’m taking lessons. I started making banjos when I was in my mid-20s, back in the mid-to late-’70s, and I did that because of a need to have a better banjo. I wanted a better banjo, but the cost of one was kind of prohibitive. I found a magazine called Frets, and it had a catalogue in there from Stewart-MacDonald. So I started figuring, “I work with wood, I can probably put one together.” It was things I had never done before, like inlaying, but I figured if I read about it, I could do it. So, I built my first banjo back in 1978. I remember when I took it in to my banjo teacher, she went, “Wow! I’ve had a lot of students that say they’re going to build a banjo, but it never looked like this!”

OS: What style of banjo is your specialty?

Walker: The ones I’ve built lately are the little small banjos. Some people call them pony banjos, or piccolo banjos. Mine are kind of unique in that they’re about half the size of a full size, so you can tune it to standard G. People who play bluegrass can play in different keys, but G is a standard tuning on a banjo, so these can be played along with full-size banjos and still be in tune with them.

OS: How long does it take to make a banjo?

Walker: To make one of my many banjos, it usually takes me anywhere from four to eight months in my spare time. I work on it when I can, and when I feel like it — it’s something you don’t want to rush.

OS: Is there something a lot of people would find surprising about your banjos?

Walker: Most people are surprised when they see one of my banjos and see where it comes from. I have a little shop on the end of my house that used to be a study [from the previous owners]; that’s where I do my work on the inside. I [also] have two little rooms that I’ve made into one room on the side of my garage. For the longest time, I didn’t even have a Shopsmith — all I had was a sander combo made out of plywood, a piece of lawnmower, and a washing machine motor that I built four or five banjos with. There’s people that build banjos that have larger facilities and can build 15, 20 banjos in a week. But that’s not me.

OS: What is it about building banjos that continues to excite you today?

Walker: Well, the first ones were kind of simple, kind of crude. [Now], every time I build one, I do something a little different. I learn a little more. If I’m not learning, then why do it? If I’m building one exactly the same way, it wouldn’t be as much fun. Every one of these has a piece of me, because I’ve got a piece of me in it. It’s something I individually designed.

OS: How have your banjos connected with owners?

Walker: Well, the first one I made [for someone else] was for Little Roy Lewis. I made it, found his address, and shipped it to him. I just sent it to him. Six months later, I was playing at Grand Ole Gospel, and Little Roy Lewis was there. I spoke to him, and of course he recognized me, and he told me how much he liked it, and he said, “You know who else really liked that banjo? Ricky Skaggs. Oh, he had a fit over it.” So I decided then that I was going to build him one. It took me six to eight months, [but] I built it and sent it over to Ricky, and he didn’t know it was coming. One day, I was at work. Everybody had left the shop but me, and the phone rang. I picked up the phone — it was Ricky Skaggs. He called me to tell me how much he enjoyed it and that he really appreciated it. That’s kind of special to get a call from him like that.

OS: How has modern technology, such as public power, allowed makers to expand the ways they craft?

OS: If you could make banjo-making your full-time profession, would you?

Walker: I don’t think I’d ever make it a full-time business. If it’s something that you have to do, then you feel obligated that you have to do it now: You’ve got to get this done today, you’ve got to get this done tomorrow, because there’s somebody waiting for it. A lot of times, the ones that I’ve given away, I don’t even tell them I’m building one because if I tell them I’m building them one, then they’re going to [ask] every week or so, “How’s it coming?” Then I feel like I’ve got to get it done. I don’t like the pressure of it. I’m sure that once I retire, that I’ll probably do more of it. Maybe do four banjos a year.