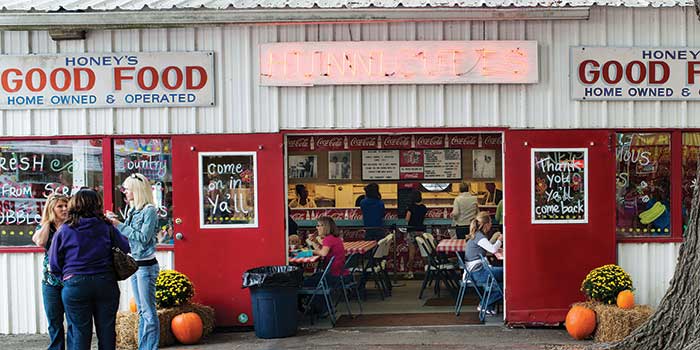 If you’re planning to get one of Memaw’s biscuits at the N.C. State Fair in Raleigh, you might want to hurry.

Not just because you never know when the biscuits will sell out. Every year during the fair, Betty Buchanan, a k a Memaw, starts making biscuits, 28 to a pan, at 6:30 or 7 in the morning, and she goes until she wears out, usually around 3 in the afternoon. And that’s it for biscuits until the next day, says her son Ronnie Buchanan.

The Buchanan family has run a food stand, Hunnicutt’s, at the fair for 76 years. Ronnie’s grandparents, Herman and Myrtle Hunnicutt, opened it in 1937.

The story goes that although Myrtle was a good cook, she didn’t make biscuits. Her daughter Betty, however, started making biscuits in her 20s. Just a few pans for the other vendors to celebrate opening day, at first. But once you start, it’s hard to stop.

Now, here’s the problem: Betty Buchanan is the only one who can make the biscuits, Ronnie says. Everyone else has tried — her daughters, her granddaughters. No one can get it exactly right.

“There is something about it,” he says. “You really can’t describe to somebody how that dough needs to feel. When you take a five-pound bag of flour and you put it in a bowl and then you pour buttermilk in it and then some Crisco. When you put all that in the pan and you just take your hand and mix. And you say, ‘Nah, that’s not quite right,’ and you sprinkle a little more flour. And you just mix it with your hand and you say, ‘That’s right.’

“It’s hard to tell somebody, ‘This is how it should feel.’ It’s not like she can write down a recipe.”

Memaw isn’t getting any younger. She’ll be 80 in February, and she’s been making biscuits at the fair, plus the occasional pan for family, for 60 years or so.

She’s not stopping soon, mind you. Her son says his mother is tough.

Still, someday, maybe in 20 years, Memaw will give out. And then who will make those biscuits?

Seriously, people. You might want to get a move on.

Where to find Hunnicutt’s at the State Fair?
Search for a spot popularly called restaurant row, located near Dorton Arena. This year’s State Fair is October 17-27.

This story originally appeared under the headline, “Blue-Ribbon Biscuits.”