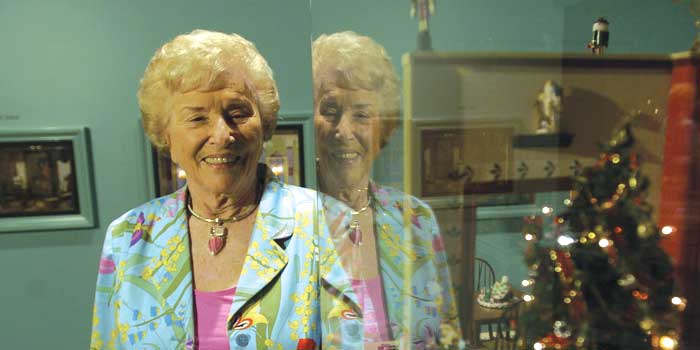 What began as a simple hobby for Meredith Slane Michener — the building of miniature rooms — ultimately grew into something, well, not so miniature. The High Point woman’s passion evolved into what is believed to be one of the largest collections of miniature rooms made by one person in the country.

Michener’s exquisite collection of 30 intricately designed and constructed rooms, referred to collectively as “Meredith’s Miniatures,” can be seen at the High Point Museum, which has displayed the miniatures as a permanent exhibit since Michener donated the collection to the museum in 2011.

“I’m happy that so many people have enjoyed my miniatures,” Michener says. “They brought me so much joy, and I want others to be able to experience that, too.”

Michener took up the hobby around 1990, after building a dollhouse with her 10 grandchildren — a project she took on because she wanted to bond with them more closely. The need to furnish the dollhouse led her to a shop for miniature hobbyists, and a passion was born.

“I just fell in love with it,” Michener recalls. “I knew right away this was something I wanted to do.”

She dove in enthusiastically, even flying to Seattle to study with a nationally renowned miniaturist. She learned to use tools she had no experience with — a miter box, a table saw, a drill press — as she honed her craft.

“I had my own sense of design,” Michener says, “but I had to learn how to build a room, how to build doors, how to build windows, ceilings, and stairs — all these things I had never done before. I came back, and I started building; I was so in love with the hobby. When I finished one room, I’d be ready to start another one.”

All in the details

Each of Michener’s rooms, or settings, has a theme, from “Victorian Kitchen” to the Colonial-themed “Old Salem” to “Big Easy,” which reflects a New Orleans French Quarter setting. “Playtime” is a magnificent children’s room, “The Learning Place” is a stately library, and “Noteworthy” is a music room resonating with tiny, breathtaking detail, from the miniature harpsichord, cello, violin, and trumpet to the music stand with sheet music on it.

“You can make anything in miniatures,” she explains. “There are no limits to what you can do.”

One of Michener’s favorite settings is “It’s Christmas,” a grouping of five miniature rooms decorated for the holidays. The scenes include a Christmas tree with lights and ornaments, a tiny gingerbread house, and several nutcrackers scattered throughout the rooms.

Each room took anywhere from one to 10 months to complete, and it’s easy to see Michener’s attention to detail in the accessories: a fireplace, a model ship, a chessboard and pieces, a folded newspaper on the sofa. One room, a kitchen setting called “What’s Cooking,” even has a tiny photograph of Michener and her husband, Ed, as well as mugs in the cupboard that have their names on them.

“Meredith’s miniatures are beautiful,” says Teresa Loflin, director of community and membership relations for the museum. “To me, it’s like she puts a little bit of herself in every room.”