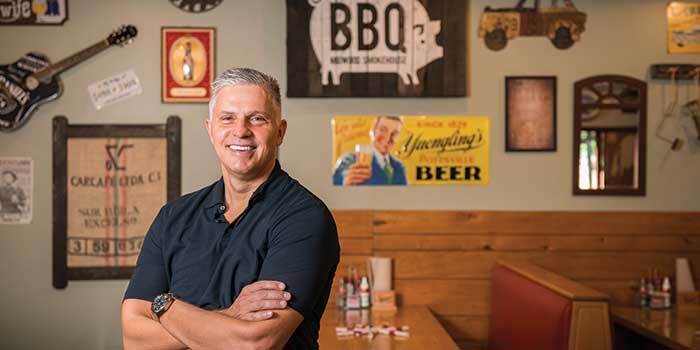 Frank Scibelli just comes right out and says it: If you want good barbecue in Charlotte, you don’t have a lot of options.

But Charlotte is growing, you say. There are more cooks cooking more food, and more varieties of it, than ever before.

“Still not good barbecue,” he says.

Maybe it’s got to do with the smoker. You have to have a smoker, he says. Not many barbecue places in Charlotte have one. He does. He mentions it over and over again. He asks if I’ve seen inside it, where at least one piece of hickory is burning 24 hours a day. He makes sure I know the only thing that powers his smoker is wood.

You can taste the hickory in the bark of the brisket, the fatty kind that brings the flavor that Frank likes best. He doesn’t use the leftovers for Brunswick stew. Instead, his cooks chop it up and put it in with the spicy baked beans and sloppy joes and on top of the gooey pimento cheese fries. It makes culinary sense, he says. But it also makes Midwood Smokehouse stand out in a town where barbecue is decidedly not king.

Charlotte has traditionally been a city of diner fare and soul food, of chain restaurants and ethnic cuisine, where Emeril Lagasse has a restaurant and where arguably the most famous place to eat is a fried-chicken joint that closes at 6. If you want food you can’t find anywhere else in North Carolina, you come to Charlotte. But if you want good barbecue, something you can find anywhere else in North Carolina, you have to leave Charlotte.

The best barbecue is cheap. It takes wood to fire the smoker, and woodpiles take more space. By law, you can’t prepare barbecue in the same place you smoke it. That takes more space. In Charlotte, land isn’t plentiful. You’ll pay more for it and get less. That makes food cost more. So you’ll find the best deal on good barbecue in out-of-the-way places, where life costs less and the acreage is easier to come by. The type of barbecue joint you see in Shelby, Lexington, or Down East, the little wood-frame restaurant that’s been smoking pork with the family recipe for decades, just never materialized here. “They exist where they exist for a reason,” says Kathleen Purvis, The Charlotte Observer’s food editor, “and that reason does not exist in Charlotte.”

This feeds into what Frank Scibelli does best. He gives Charlotte what it lacks, then over-delivers. In 1992, when Scibelli opened his first restaurant, Mama Ricotta’s, he couldn’t find fresh mozzarella. So he made it himself. It was a hit. Then he couldn’t find any Mexican food he liked, so he opened Cantina 1511 in the Dilworth neighborhood. He followed up with Tex-Mex he liked (Paco’s Tacos & Tequila) and exquisite burgers he liked (Bad Daddy’s Burger Bar). In short, if Frank Scibelli likes it and can’t find it in Charlotte, he makes it into a restaurant, makes it himself, and then makes a lot of money. And that’s why, in 2011, he opened Midwood Smokehouse.

He’d had the idea for a barbecue place since his previous life as a business consultant. One of his clients used to take him to Houston, Texas, to eat at Otto’s, which had barbecue so tasty that the first President Bush had it shipped to the White House. Why not bring that style of barbecue to Charlotte?

Midwood Smokehouse was conceived during several training trips to Texas, then given a Carolina twist when the cooks got back. They’d use nothing but wood. They’d add craft beer to the menu, some picnic tables on the rooftop, and other touches that made them fit into their space on Central Avenue. They’d give their pulled pork a light drizzling of the vinegar-based sauce that’s big Down East, even though Charlotte is geographically in Lexington-style, tomato-sauce territory. Scibelli says the eastern-style sauce, which he likes, helps cut some of the acidity of the fat. He doesn’t want to wade into the rift between lovers of western sauce, which, if you’re from Goldsboro, tastes like ketchup, and lovers of the eastern style, which tastes like battery acid if you’re from Shelby. In North Carolina, those two vastly different styles somehow come together and manage not to mingle, but at least coexist.

It only makes sense, then, that there would be a barbecue joint in Plaza Midwood. Charlotte’s most ambiguous neighborhood is a mix of bartenders and bankers, of bungalows and brand-new apartment buildings. The Common Market, with its slacker charm, is a few blocks away from a brand-new sparkling hulk of a Harris Teeter. Some people live here and don’t like people coming in from other neighborhoods, and some other people from other neighborhoods come here to get away. They might not mingle. But people in Plaza Midwood have found a way to coexist. “They’re more likely to adopt something that’s more unusual than some other neighborhoods in Charlotte,” Scibelli says.

Scibelli lets Matt Berry, his top chef, tinker. The pork is a mix of shoulder and whole hog. The wood smoking is old style but some parts of the decor, and the menu, are new style, with smoked salmon, turkey, and tacos. So far, it’s worked. Restaurateurs from Britain have shown up looking to learn. The Smokehouse made Zagat’s. Carolina Panthers linemen eat here. After just two years in business, Midwood Smokehouse doubled the size of its dining room and kitchen.

On a Thursday night, that kitchen is frantic. Waiters and waitresses in black T-shirts shimmy around prep tables. “Keep moving!” someone bellows. The manager opens up the smoker, mostly empty at this point. It’ll fill up soon, with enough wood to burn through the night and enough meat to make it through the next day.

Outside, hipsters wearing stocking caps are sitting at the table next to guys in button-up shirts. A waiter fixes a wobbly table. Cars whoosh by on Central Avenue. A de facto tour guide walks past Midwood Smokehouse with a gaggle of his friends behind him on the sidewalk. “You know,” he says with no hint of an accent, “Charlotte is known for its barbecue.”

Not quite yet. But Frank Scibelli is working on that.