The Blue Ridge Parkway is more than a scenic byway. It’s a journey through our heritage. On its gentle curves, we discover beautiful overlooks alongside the history, cuisine, craft, and culture of western North Carolina. We find rustic cabins built by early settlers and a gleaming mansion where a textile magnate once spent summers. We find apple-picking and fly-fishing, mountain breakfasts and white-tablecloth suppers. We find painters, potters, woodworkers, musicians, and so much more. Along the way, the Blue Ridge Parkway brings us closer to nature — and to ourselves.

Choose between two hikes — one leisurely, the other strenuous — at the parkway’s first recreation area, which opened two years after construction on the road started at the same site in 1935.

Pull over and scan the rolling landscape: That treeless patch in the distance is actually the 600-foot granite crown jewel of Stone Mountain State Park. 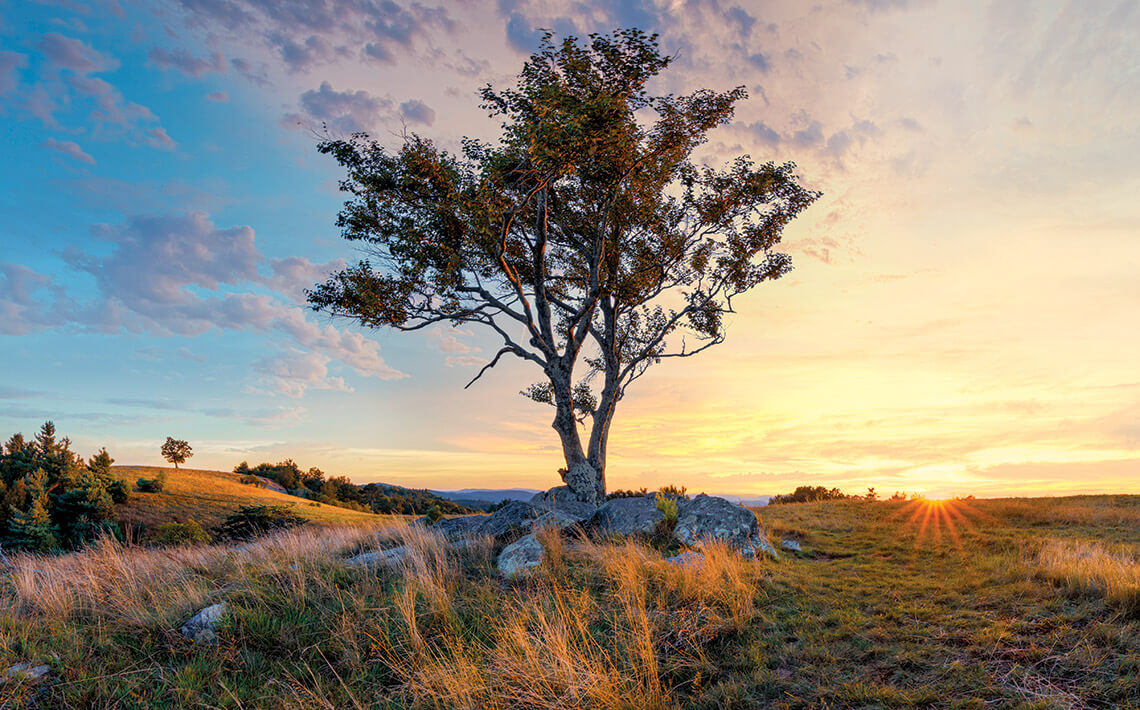 The Bluff Mountain Trail — a seven-and-ahalf-mile segment of the Mountains-to-Sea Trail — traverses the picnic area at Doughton Park. photograph by Mark Hazelton

Take in the view of Bluff Mountain, then pick up the trail of the same name to hike along the parkway through forestland and open fields.

From this eastward-facing pull-off, the landscape falls away into the Yadkin Valley. At an elevation of 3,795 feet, the Elk Mountain Overlook provides sweeping views of the valley below.

Spot Cone Manor on a stroll around Bass Lake. photograph by CRAIG ZERBE 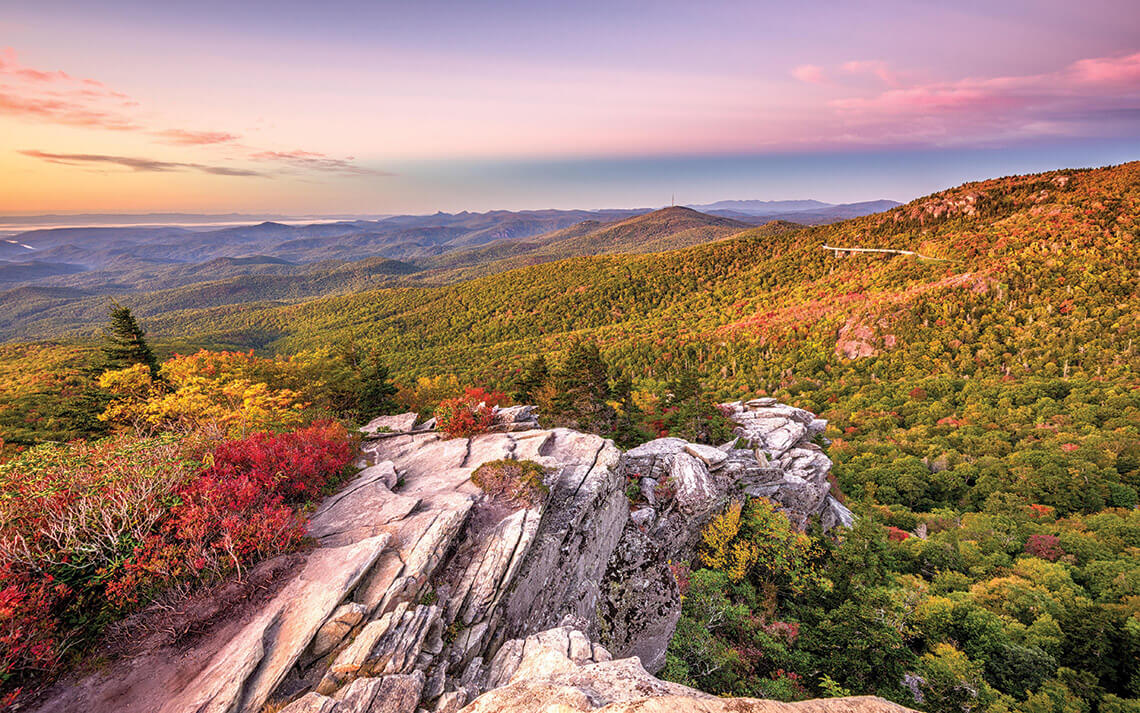 Seen from atop Rough Ridge, the Linn Cove Viaduct — the final piece of the parkway to be completed — is a natural fit on Grandfather Mountain. photograph by SEAN PAVONE/ALAMY

It takes a little legwork to reach the summit of Rough Ridge, elevation 4,773. From the parkway, the trail leads uphill on steep and rocky terrain. The reward: stunning views of Grandfather Mountain decked out in glorious fall color. 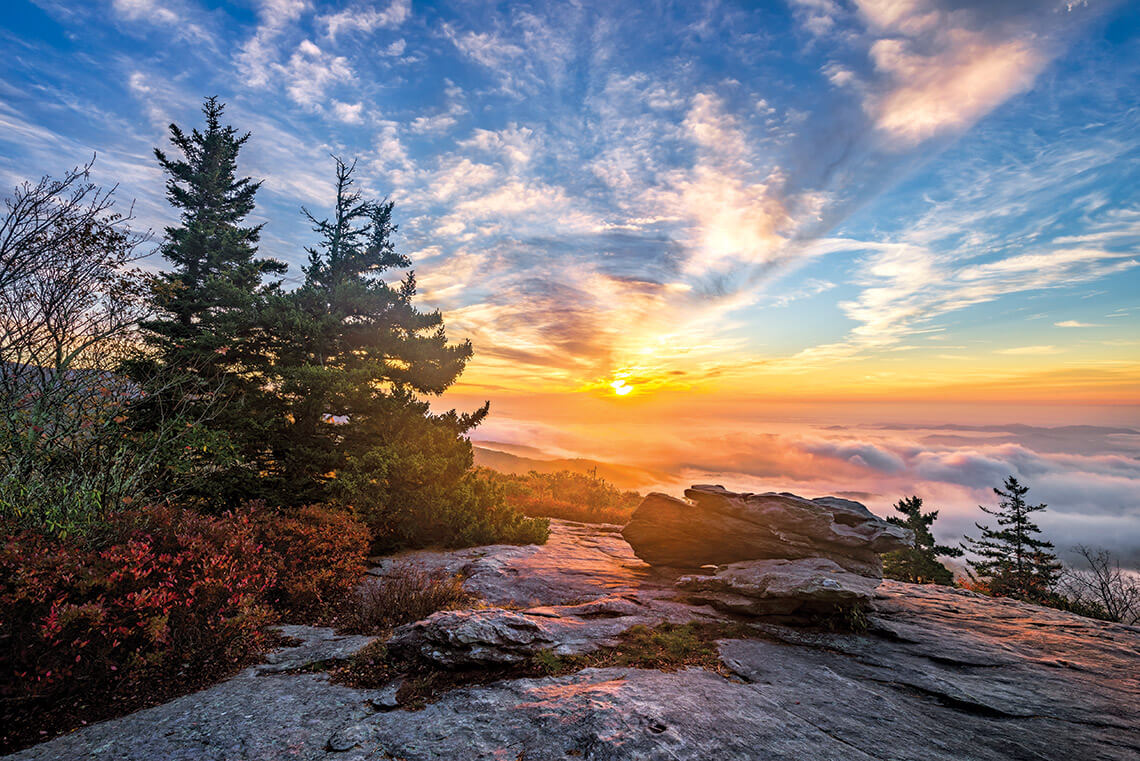 From the parking area, a steep half-mile hike up the rocky Beacon Heights Trail leads to the summit. The forest clears to reveal two quartzite outcrops — and a vista as beautiful on a clear day as it is when clouds enshroud the mountains below.

The famous face of Grandfather Mountain can be seen from many points along the Blue Ridge Parkway. Yet such an iconic peak deserves its own overlook — and at this pull-off, the sleeping patriarch takes center stage.

Flat Rock Overlook’s panoramic views of the Linville Valley are especially spectacular in the glow of an autumn sunset. photograph by CRAIG ZERBE

A short, relatively easy trail from the parking area guides hikers through the woods and up to the quartzite outcrop that gives Flat Rock its name. Signs identify interesting natural features along the way, like the “bathtubs,” or shallow basins caused by erosion, in the smooth rock at the summit. 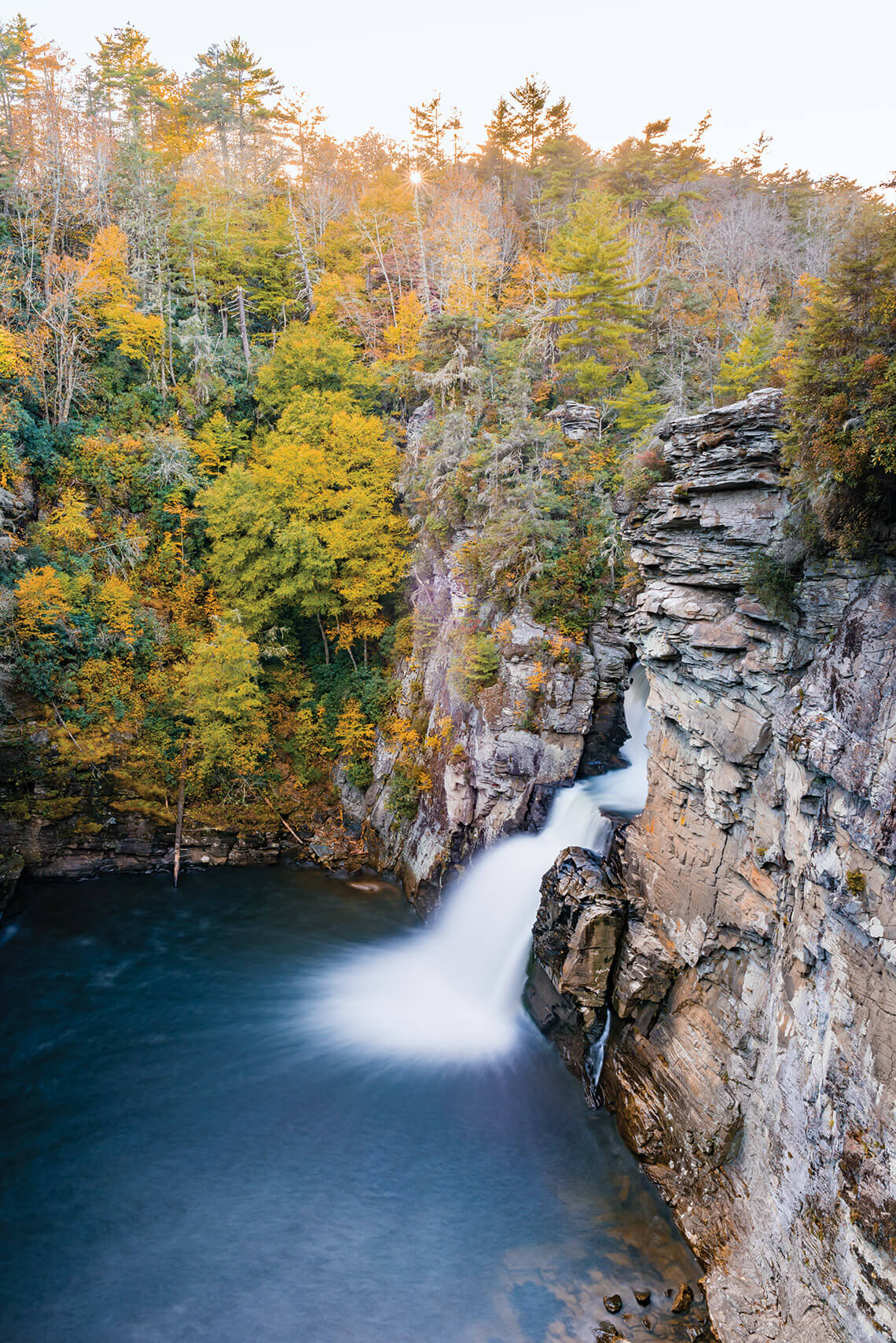 Three-tiered Linville Falls is one of the most photographed waterfalls in the Blue Ridge Mountains. photograph by Emily Chaplin

Easy access to the majestic, multitiered waterfall that plunges into Linville Gorge — sometimes called the “Grand Canyon of the East” — makes this a popular stop along the Blue Ridge Parkway. To learn about the various hikes in the area, stop by the Linville Falls Visitor Center from May through late October. 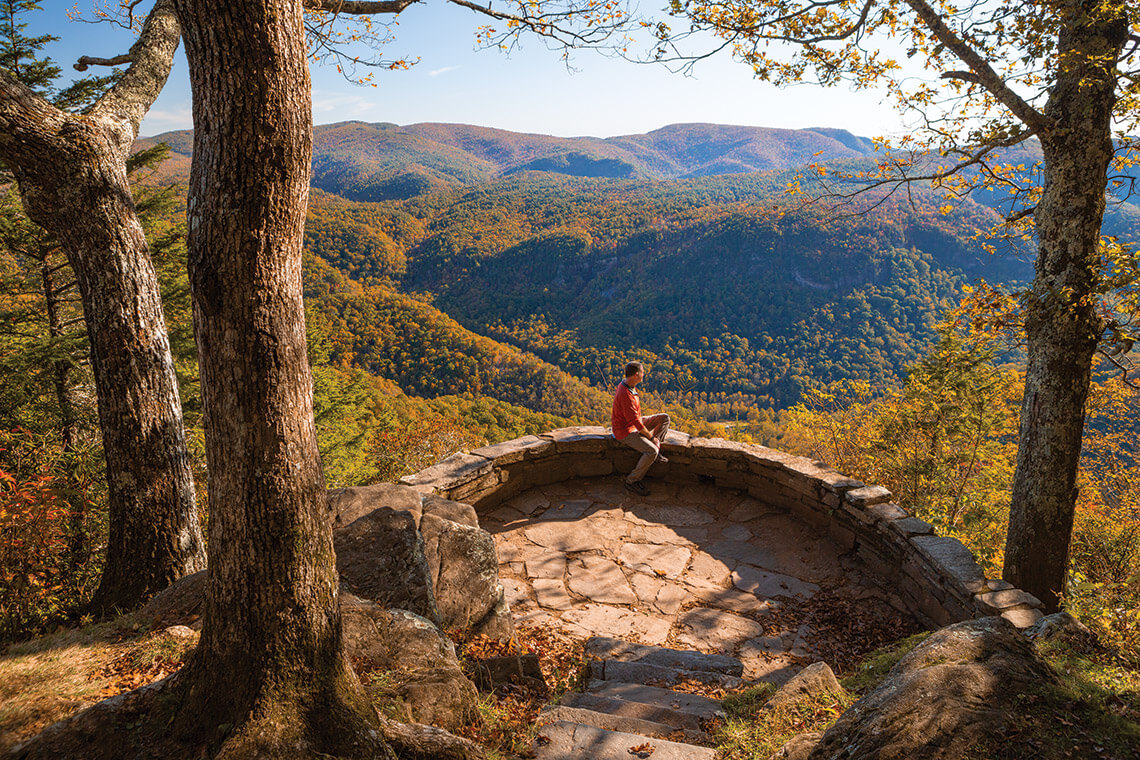 From the parkway, take a short walk through the woods and descend the stone steps to reach Chestoa’s rustic balcony: In the fall, when the foliage in Linville Gorge puts on a show, this overlook offers a front-row seat to watch the drama unfold.

Planted by a railroad company in 1908, this historic orchard continues to thrive thanks to siblings Kit Trubey and Bill Carson and Bill’s wife, Judy. In 1994, they purchased more than 275 acres along the parkway to protect the land from development. The family’s nonprofit preserves Blue Ridge heirlooms in many flavors: mountain music, storytelling, and old-timey apples like Stayman Winesap and Virginia Beauty.

At Green Knob Overlook — impressive in its own right — keep an eye out for the U.S. Forest Service’s Green Knob Trail. A steep half-mile hike leads to a 1930s fire tower atop the 5,060-foot knob. The tower’s cab is closed, but its staircase provides panoramic views of the Black Mountains.

The observation deck at the tip-top of Mount Mitchell offers a panoramic view of the surrounding mountains. photograph by Jared Kay

To get up close and personal with the highest point east of the Mississippi River — elevation 6,684 — you’ll have to take a little detour on NC Highway 128 to Mount Mitchell State Park. If catching a glimpse of mighty Mitchell from the parkway is enough, though, there’s an overlook at Milepost 349.9. 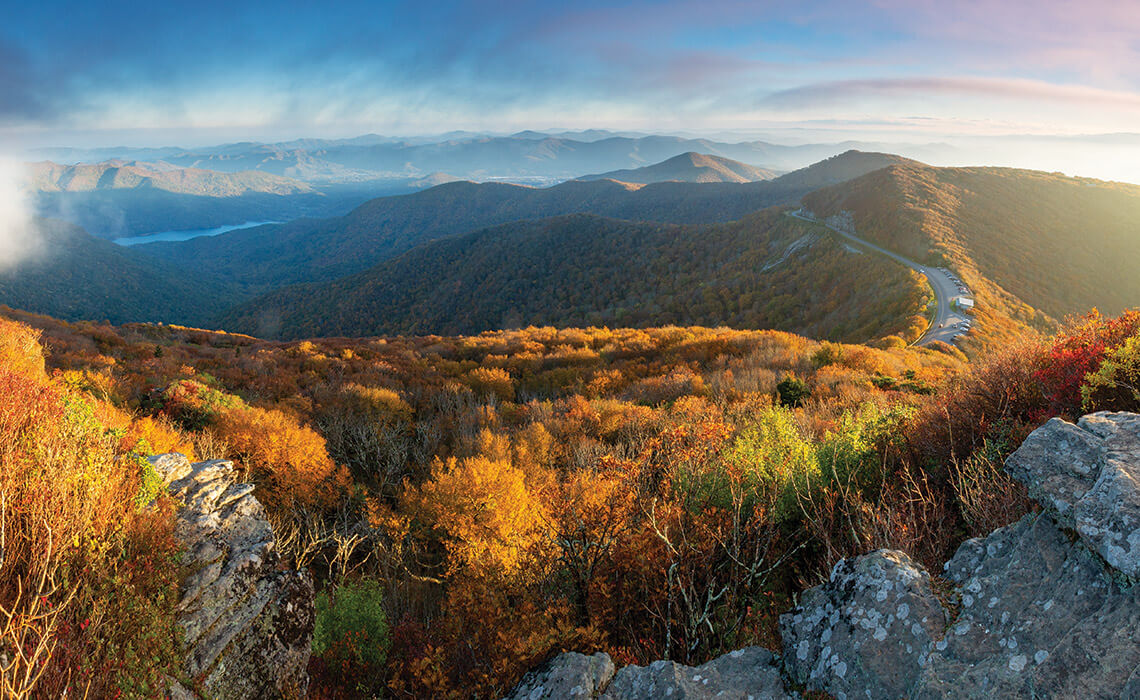 From the parking area at Craggy Dome Overlook, it’s only a little more than half a mile to the 5,892-foot summit of Craggy Pinnacle, with its incredible views. photograph by Steven McBride

The Craggy section of Pisgah National Forest is a wonderland of old-growth forests, rare wildlife habitat, waterfalls, and soaring views (to see this one, hike up from the Craggy Dome Overlook). To protect this special place, local advocates are working to designate 16,000 acres as the Craggy National Scenic Area — the first such area in North Carolina.

Once, the 70-foot-tall steel tower at the top of Fryingpan Mountain helped the U.S. Forest Service look out for wildfires. Today, hikers climb its stairs to glimpse Looking Glass Rock, Cold Mountain, Mount Pisgah, and more. 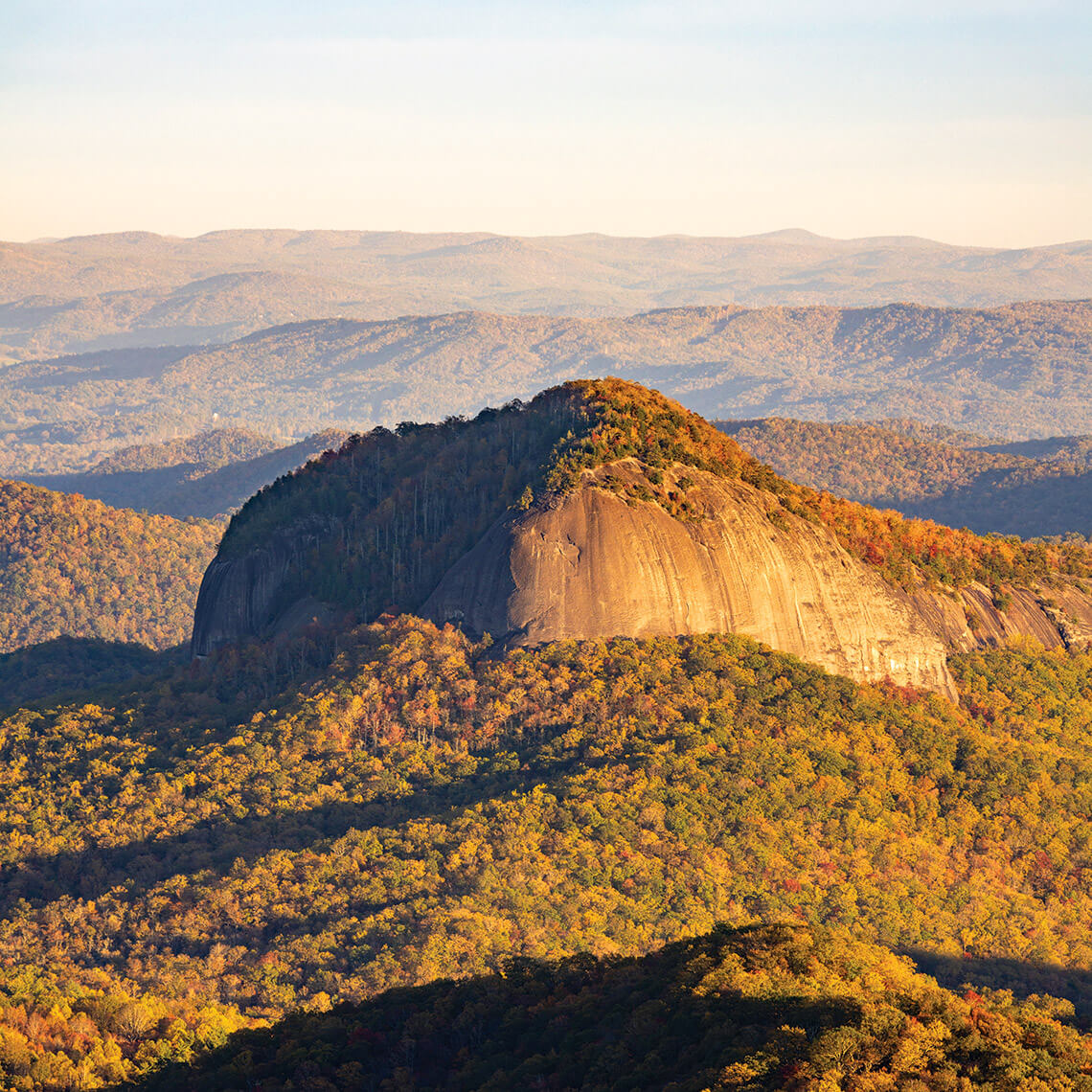 If gazing out at Looking Glass Rock has you eager to hike it, drive around to the opposite side of the mountain from the Blue Ridge Parkway, and you’ll find a trailhead. photograph by Derek Diluzio

At an elevation of nearly 4,000 feet, Looking Glass Rock cuts a striking figure as it rises up out of Pisgah National Forest. Named for the way sunlight reflects off the sheer granite face when it’s wet — like a shiny mirror — Looking Glass is what’s known as a pluton monolith, meaning that it began as a mass of molten rock below the earth’s surface, gradually exposed as the soil above and around it eroded over millions of years. 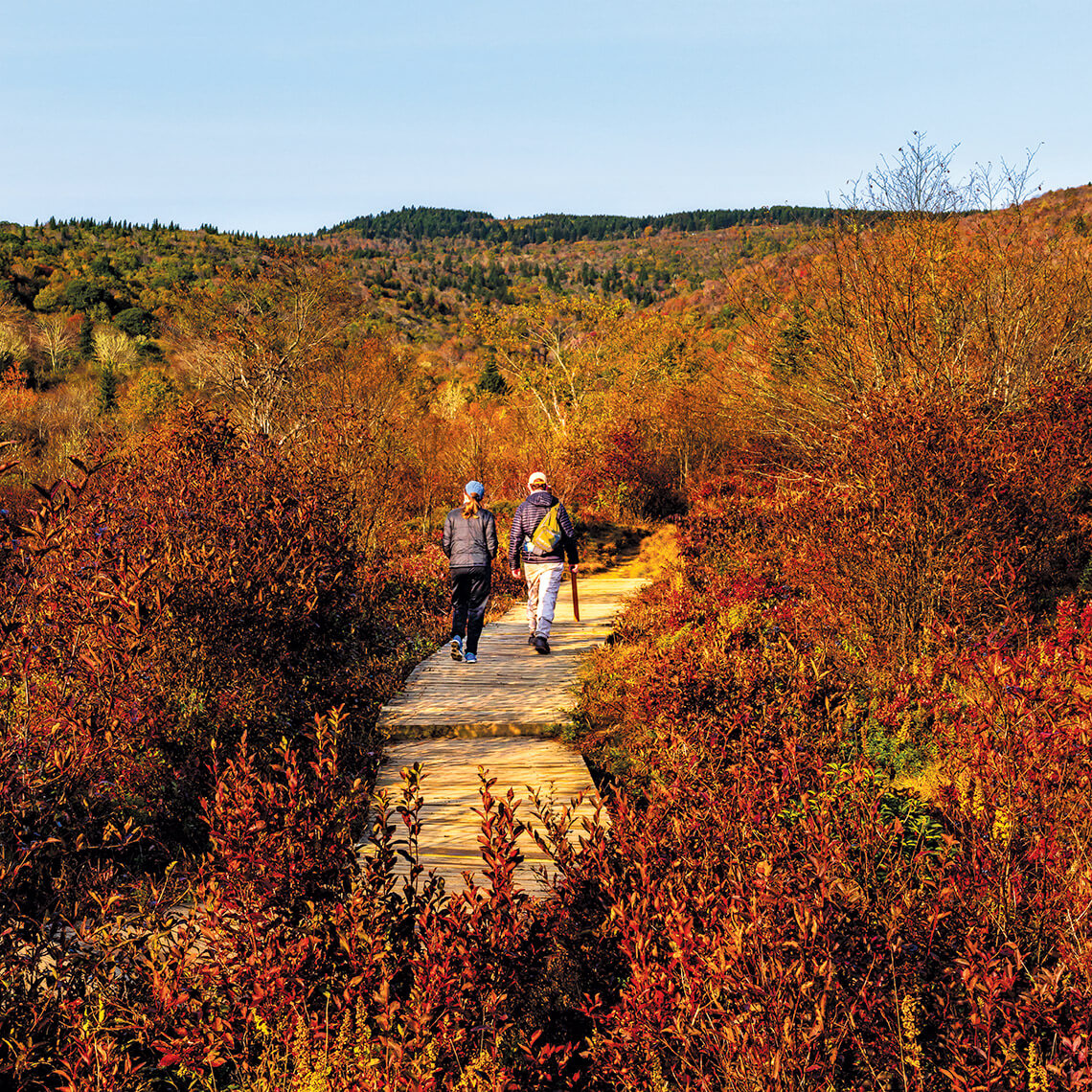 Rather than diminishing Graveyard Fields’ beauty, past fires have caused the area to have an unusually diverse variety of plants and animals. photograph by Thomas Moors

This popular area got its name from the mossy tree-stump “headstones” that once made it look like a cemetery — until a fire swept through in 1925. From the parkway overlook, a loop trail leads to waterfalls, high-elevation meadows, and fall foliage. 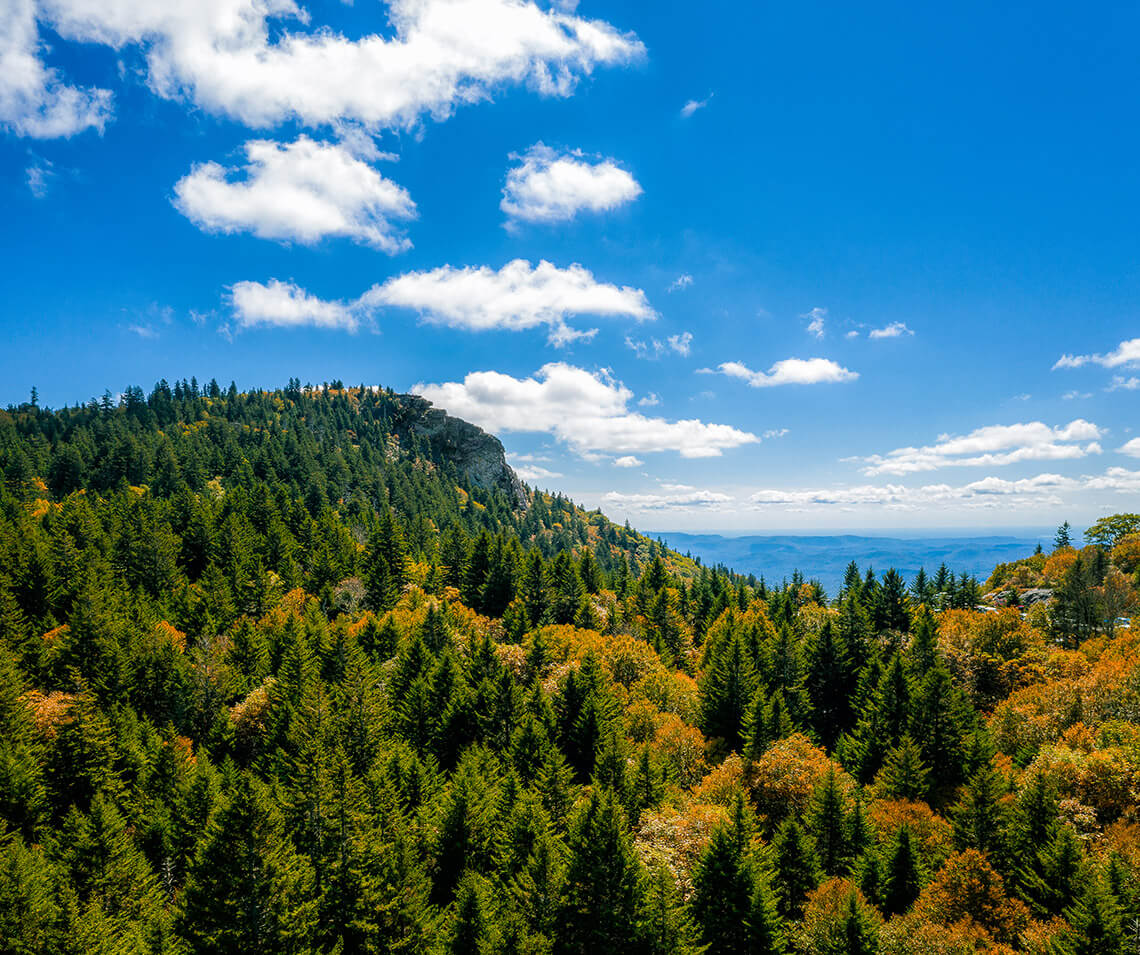 From Devil’s Courthouse Overlook, you can see the sinister rock face, peeking out from the balsam fir trees, that helped inspire its name. A steep uphill hike leads to the 5,720-foot peak, where views of North Carolina, South Carolina, Georgia, and Tennessee unfurl below. 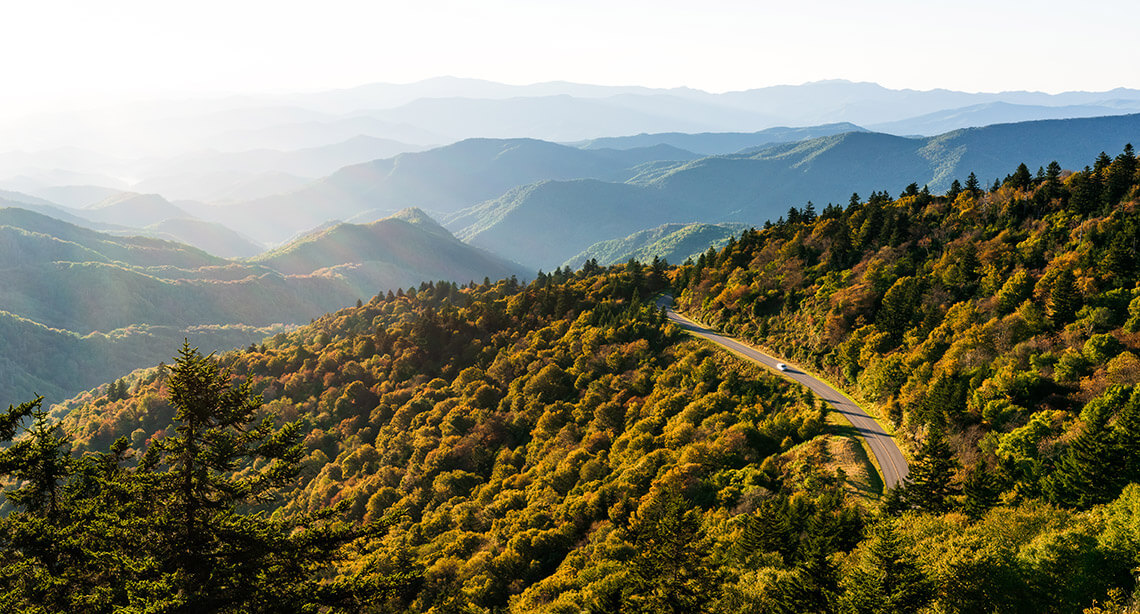 At the summit of Waterrock Knob, views unfold in nearly every direction, sweeping across mountain ranges like the Great Balsams, the Great Smokies, the Craggies, and more. photograph by Thomas Moors

At an elevation of 5,820 feet, the visitor center at Waterrock Knob is the highest on the Blue Ridge Parkway. Its namesake mountain is even taller — the 6,292-foot Waterrock Knob is the highest point in the Plott Balsam Mountains, and the 16th-highest peak in the Eastern United States. Hike to the summit for wide-ranging views of the Great Smoky Mountains and Maggie Valley below.

Pull off the parkway and look down into the valley — the vista’s namesake ridge sits about 100 feet below. Beyond, clouds often seem to pool around miles of mountains, making islands of each distant peak.

A 1.5-mile detour on U.S. Highway 19 and a short walk into the woods lead to the gorgeous double waterfalls that tumble just inside the Qualla Boundary. Look closely: Understated signage makes Soco Falls feel like a hidden gem.

A few stops before the last overlook on the southern end of the parkway (that would be Oconaluftee River View at Milepost 468.4), this vista looks out over the Great Smoky Mountains.