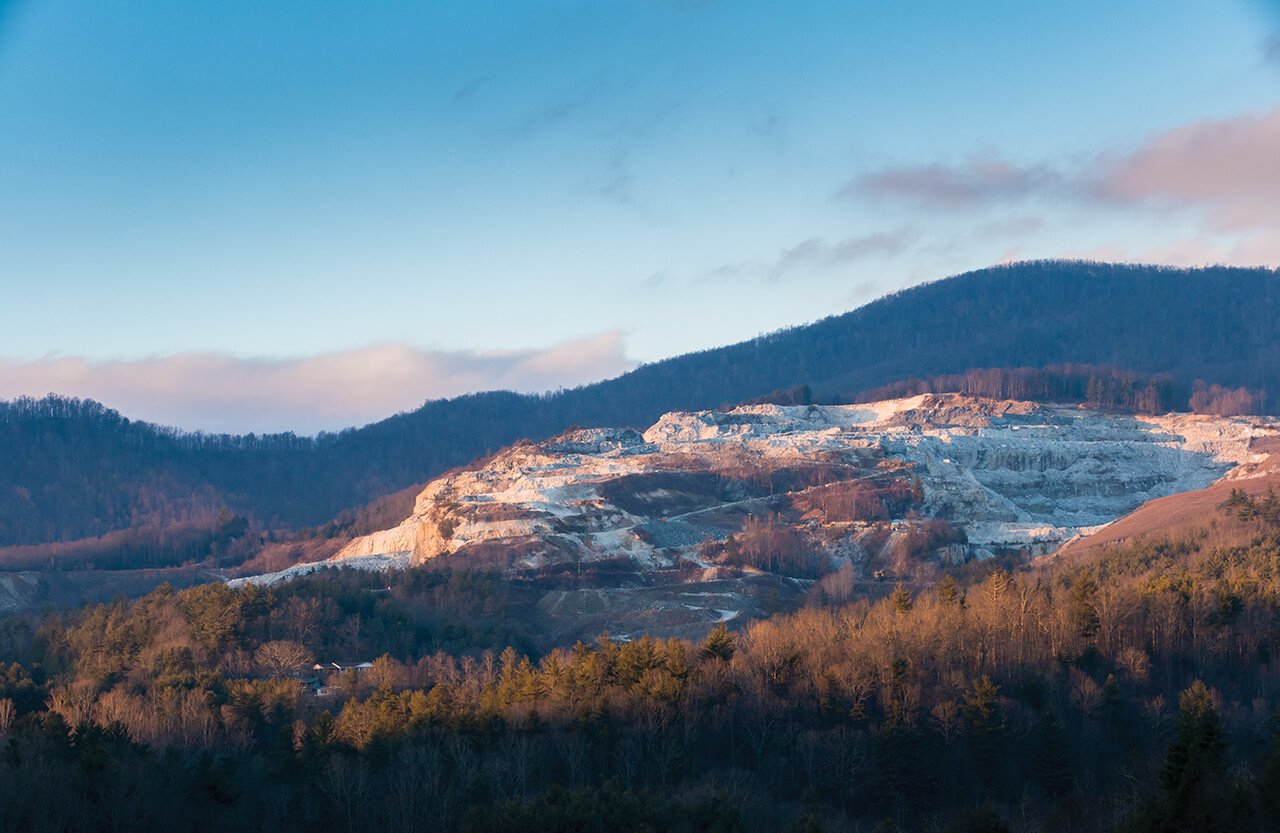 These are mature mountains, mellowed and humbled by their breathtaking age. They’re far from those brash upstarts — the Rockies, the Andes, the Himalayas — that bare all their rock-ribbed cleavage. Time, like the grains of some cosmic sandpaper, has smoothed out their rough edges and brought these once-giant show-offs a little more down-to-earth.

They are modest mountains, clothing themselves in thick forests and softening their complexion with a blue haze. They embrace us rather than intimidate us. The tallest mountain, Mount Mitchell, is 6,684 feet — less than half the height of Pike’s Peak in the Rockies and less than a quarter as tall as Mount Everest. But what these mountains lack in height and Hollywood appeal, they more than make up for in their depth of geologic history.

That history is coaxed to the surface in a region known as the Spruce Pine Mining District, a 25-mile-long swath of mineral-rich real estate in Mitchell, Yancey, and Avery counties. The earth here is bejeweled with emeralds, amethysts, sapphires, garnet, kaolin, quartz, mica, and feldspar. The countryside is dotted with gemstone mines, jewelry shops, and tourist stops — there’s Gem Mountain (with its cartoonish miner mascot clutching a crystal) and Isinglass Village (with its big sign hawking jewelry, rocks, crafts, and mica lamps).

Drive into Spruce Pine, a town of 2,100 named for all the hemlock trees (a type of spruce, in the pine family) in the Toe River Valley, and the view strikes like a pickax: A gouged-out mountainside with crags and terraces rising as ramparts over mounds of sand. At times the rock face glints in the sun. This is a massive mine where multinational companies such as Unimin and The QUARTZ Corp extract the purest quartz found anywhere on Earth. Because of its sheer purity, nearly every computer chip on the planet is manufactured using quartz from Spruce Pine. (And because of its high value, the mine is big on security guards, gates, and “authorized personnel only” signs.)

“If you have a computer, you have a little slice of Spruce Pine,” says Robin Townsend of the Mitchell County Chamber of Commerce. She works at the Museum of North Carolina Minerals, just off the Blue Ridge Parkway, where one can tap into a mother lode of local mineral lore. Outside the building is a hulking hunk of pegmatite, the crystal-laden rock for which Spruce Pine is famous. Pegmatite is an igneous rock — remember that from middle school science class? — formed when magma, the hot, pasty fluid that is found beneath the surface of the earth, cools and becomes solid. In these mountains, the uplift of rock and eons of erosion put pegmatite close to the surface and make it easy to mine.

Aside from the pretty gemstones sold from roadside stands, the real moneymakers in pegmatite have long been mica, feldspar, and quartz. Mica goes into stove windows (often called isinglass), radio tube insulators, paint, shingles, and even  makeup. Feldspar goes into pottery, ceramic products, car windshields, and computer screens. Quartz goes into making computer semiconductors and fiber optics. The quartz mined in these parts, local boosters say, is used in the production of just about every desktop and laptop computer in the world — oh, and every cell phone, iPad, MP3 player, and watch, too.

With veins of minerals spreading like crow’s feet through these three counties, mining runs deep in the blood of the local population. “I have a husband who works in the mines,” Townsend says. “I have two brothers who work in the mines. My dad worked in a feldspar mine for 30 years. It’s provided for me and my husband and two children.” 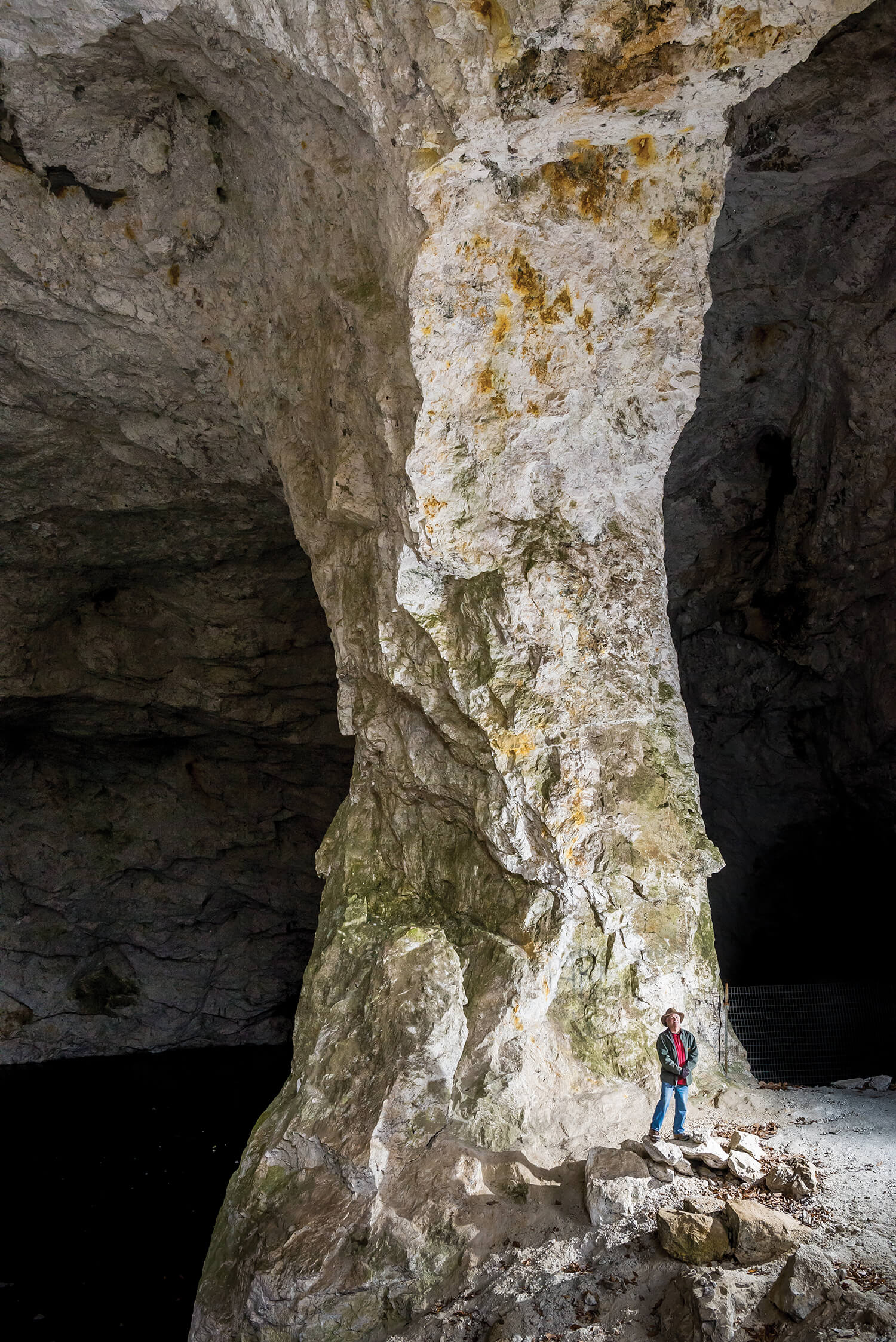 It’s a heritage that reaches back 2,000 years, to when American Indians dug tunnels 40 to 100 feet deep to cull mica from the ground. They valued its shiny quality for making beads and decorative belts, adorning graves, and use as money. From colonial years until the early 20th century, the locals — white settlers and Cherokees alike — mined mica and feldspar in the region. Mica was in such voluminous supply that, after the Civil War, researchers busied themselves finding things to do with it. Then, in 1879, along came Thomas Edison’s newfangled electric motor, whose wires needed the insulation provided by sheet mica. Then along came radios and other electronics that required mica components. From the 1860s until the 1960s, commercial mica mines pecked into these woods like sapsucker holes in hickory bark. As a nod to the mica boom, there’s even a community in Yancey County named Micaville.

Decades of mica mining left behind piles of flung-away feldspar, which wasn’t as commercially coveted in the late 19th century. But in 1910, these scrap heaps brought a shine to the eyes of a gem prospector from Baltimore named William Dibbell. He scrubbed them real nice and sent a shipment to a big ceramic plant in Ohio called Golding Sons. The plant bosses liked the ceramic-grade feldspar so much, they drafted a contract for him to supply Golding Sons with more and more. This allowed Dibbell to found the Carolina Minerals Company of Penland. By 1917, North Carolina was the nation’s top feldspar producer.

Until about 1949, most of the mining work, especially extracting the mineral from ore, was done by hand. Ira Thomas, a ninth-generation miner, started tagging along with his father when he was just 6 years old. “We drove a six-foot hole in the ground by hand,” he says. “If the steel was sharpened just right, you wouldn’t believe how quick you could do it.”

Thomas is 74 now and owns the Spruce Pine Gem Mine along N.C. Highway 226 near the mineral museum. He lives in a mobile home way back in the woods, just beyond the shadow of Celo Knob near Micaville. The “Private Property” and “Keep Out” signs appear, the pavement disappears, and his tire-rutted driveway swings around a pond where another sign is posted: “Welcome to Paradise — Where It’s Always Happy Hour.” With his black cowboy hat, black shades, black NASCAR jacket, black jeans, black boots, lanky build, big grin, and mustache, he’s a dead ringer for racing legend Richard Petty.

His father and grandfather were prospectors — “treasure hunters,” Thomas says — seeking out the best mica pockets in these hills. Luther Thomas, his late father and a local mining legend, was exempted from the draft in World War II because he needed to mine mica to produce radio tubes for the troops. “I went to work when I was just 13 years old, driving steel in the feldspar mine with an eight-pound sledge,” Luther once told Charles Kuralt. “I worked with three men driving, one turning. I worked 10 hours a day for 10 cents an hour.”

Ira Thomas became a prospector himself, and when he was barely old enough to drive a car, he really hit pay dirt. “I made enough in two and a half hours to go and buy me a brand new 1955 Chevrolet Bel Air Sports Coupe in Asheville, and paid cash,” he says. “It was just that good.”

The making of a mining Mecca

Earthmovers with names like Caterpillar and Komatsu have replaced the father-and-son outfits slinging sledgehammers. Now, dozers and dynamite tear into the terrain and reshape mountains with ease. But the process of building those mountains is mind-aching to comprehend. The annals of geologic study show that the Appalachian Mountains began forming at least 480 million years ago, the product of plate tectonics. This scientific theory asserts that the continents — the plates — drifted and bumped into each other, demolition derby-style. Have two cars collide head-on, and watch their hoods crumple and heave upward. It’s the same idea with drifting landmasses, except the crumpling happens very … very … slowly.

Alex Glover, a geologist who lives in the area, says the Spruce Pine Mining District was created about 380 million years ago when Africa shoved into North America. (The Himalayas, by comparison, are only about 50 million years old.) That collision created incredible friction-fueled heat — more than 2,500 degrees Fahrenheit. This was happening, he says, nine to 18 miles below the surface. The rock down there melted, forcing its way  through cracks in the surrounding rock. This was rich, mineral-making liquid that cooled and crystallized over the millennia to become today’s buried treasure. 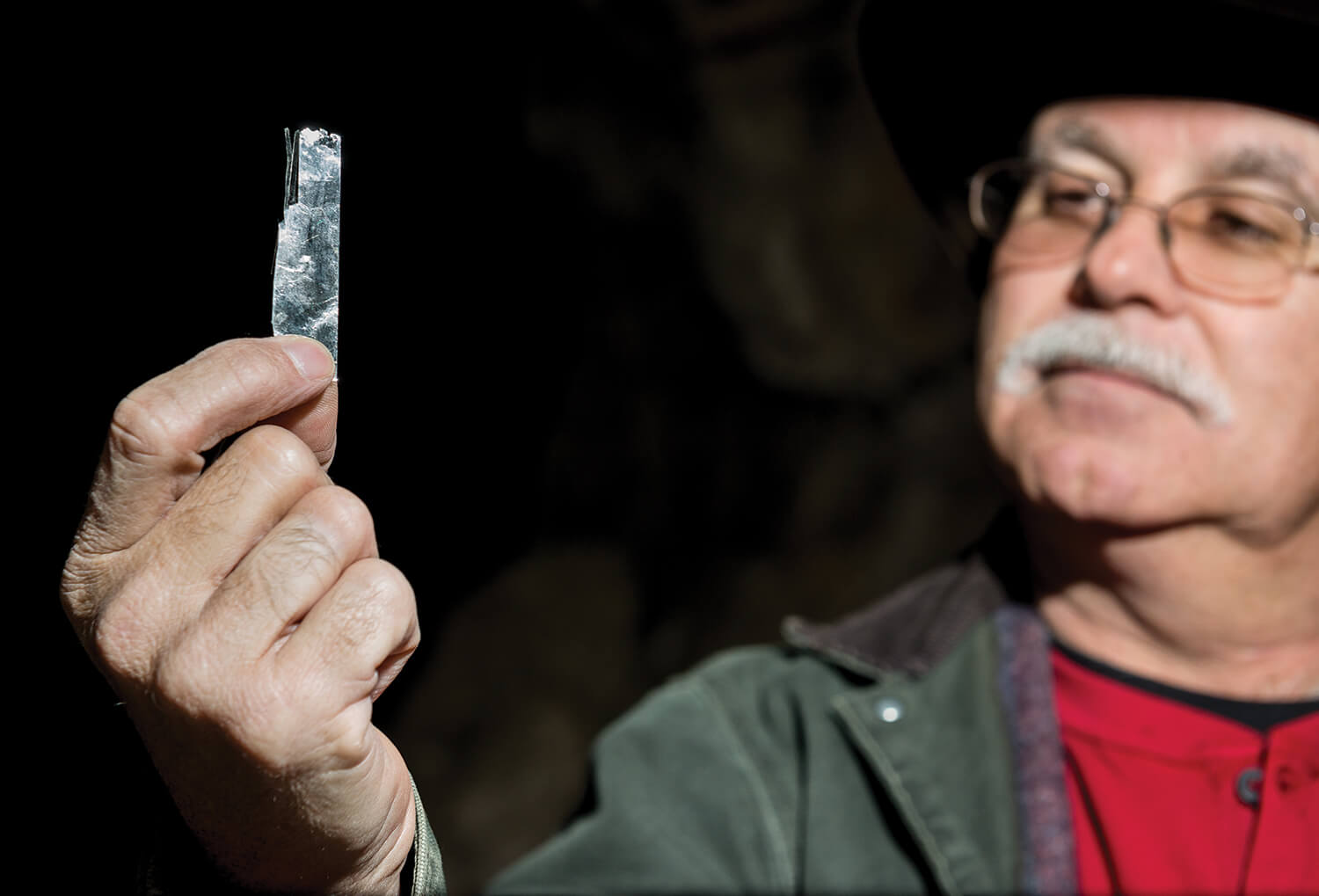 Alex Glover still finds treasure, like this piece of “rule mica” – so named because of its straight edge – in abandoned digs like the long silent Hoot Owl Mine. photograph by Emily Chaplin

What made the Spruce Pine quartz so pristine was the lack of water where all this friction occurred. Water, Glover says, would have injected all kinds of impurities. “There is no other place that has the purity of quartz,” he says, referring to these mountains that have enthralled him for most of his 58 years. It’s why he lives here now, in a log cabin-style house on a hilltop wreathed in Fraser fir Christmas trees. He has a panorama of his beloved Blue Ridge, with his living-room window and deck saluting a wide-open view of Mount Mitchell. Today, under a cobalt sky, a pillow of clouds cushioning its uppermost reaches, Mount Mitchell looks magnificent.

During the week, Glover works as the Director of Mining and Mineral Resources for Active Minerals International, five and a half hours away in Eatonton, Georgia. He lives out of an RV Monday through Friday, but on the weekend, he comes home. “Look at that! Look at that!” Glover says, his arms outstretched toward the window. “I’ve been all over the world, and I see no finer place to live in the world than right here.”

As a geologist, he’s especially enamored of the rocks here. He proceeds to show a cylinder-shaped core of rock he drilled from 96 feet underground, rock that he says is 380 million years old. “Feel that?” he says. “Feel how nice and smooth that is?” The rock cylinder contains the area’s big three minerals, with a wide belt of quartz and the pinkish tint of feldspar. As unpretentious as the stone and mountains are, they do have a way of cutting us down to size by all they have been through.