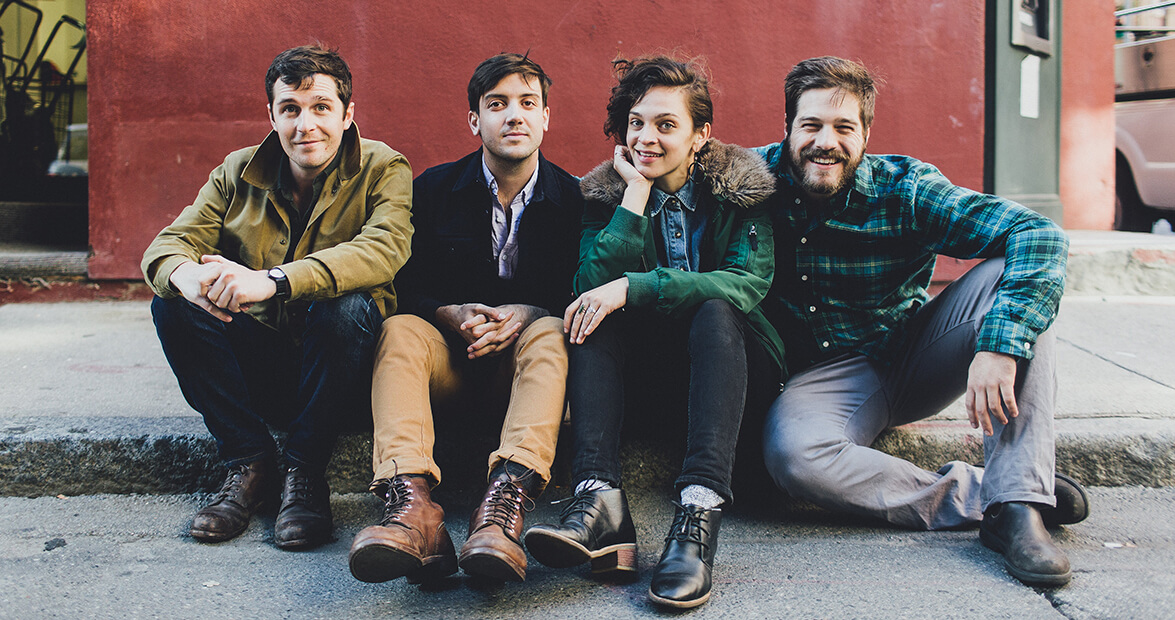 Mipso, Chapel Hill’s indie Americana quartet, has barely stood still since Our State caught up with the band after the release of its 2015 album, Old Time Reverie. Hardly a year later, the group’s fourth record, Coming Down the Mountain, dropped on Friday, April 7.

Jacob Sharp (mandolin, vocals), Wood Robinson (bass, vocals), Joseph Terrell (guitar, vocals), and Libby Rodenbough (fiddle, vocals) are used to being on the road; it’s practically second nature to them. The band is already in the thick of its spring 2017 album release tour and has shows almost every night through the end of the summer.

Mipso’s most anticipated show will be at the North Carolina Museum of Art on May 6, where it will celebrate Coming Down the Mountain with the community that raised the band. Although some have recently moved out of state — Sharp to Brooklyn, Terrell to Boston — Mipso has never lost sight of its North Carolina roots. It’s apparent in the group’s distinct Southern sound, aptly described by Acoustic Guitar magazine as “hewing surprisingly close to gospel and folk while still sounding modern and secular.”

Enjoy Mipso’s new video for “Hurt So Good” from the new record, and continue reading below for Our State’s interview with Jacob Sharp about the making of Coming Down the Mountain.

OS: Tell me about the process that went into recording Coming Down the Mountain, and the inspiration behind it.

Sharp: We started conceptualizing this album around this time last year, maybe a little earlier. We first holed up in a cabin in Door County, Wisconsin, and it was still the throes of winter there. We started sharing songs first, looser ideas than we’ve ever shared with each other before, and we partnered off in twos and threes to work on them. A couple months after that, we did a similar writing retreat weekend at this farm in between Carrboro and Saxapahaw, firming up some song ideas and themes, and listening to records that we liked the sounds of. A lot of it was Laurel Canyon stuff from the ’70s, Gram Parsons stuff that came after that, Whiskeytown, and Soul Journey from Gillian Welch — the songs started to take shape with that music in mind.

Once we knew some of those ingredients that we liked, we reached out to Brad Cook of Megafaun. We knew him well and had worked with him before, but never on a full-length thing. He was pumped and had some early thoughts; one of the major ones was just to bring drums in on everything, and let the songs flesh out in a bigger way than we ever had before. So with that in mind, we were like, Cool, let’s take advantage of all these amazing people that we get to play with, and be inspired by in the Triangle music scene. Simultaneously, a lot of us were moving. I moved to New York, Joseph moved to Boston, and Wood moved to Asheville, so we wanted celebrate and acknowledge the community that nurtured us as musicians by doing another record [in the Triangle] and inviting a lot of that crew to be involved with it.

OS: So which musicians did you invite to be a part of the latest album?

Sharp: Yan Westerlund, another Eau Claire transplant that moved to Durham, who we had played with before and knew from other bands. He initially just came to play drums on a couple songs, but then I think he ended up recording on all but one. So we had him, and we had Phil Cook on keys, Josh Oliver from Mandolin Orange, Eric Heywood on pedal steel, Andrew Marlin, and then Brad producing.

OS: What had you worked on with Brad in the past that made you want to work with him again?

Sharp: We released a little single called “Faces,” and it was two songs that were in between album cycles. This was about three years ago, and it was kind of our first reaction to touring nonstop and realizing that it’s an irrational structure for a life if you want to be creative frequently. You’re just sitting in vans and green rooms, and replicating songs instead of making new ones. So we decided to just record songs for fun with different producers and not worry about it being a well-marketed album. We reached out to Brad about what we thought at the time was our more psychedelic side, in a total Megafaun way, and have him do the first version of “Down On The Water,” which Libby wrote. 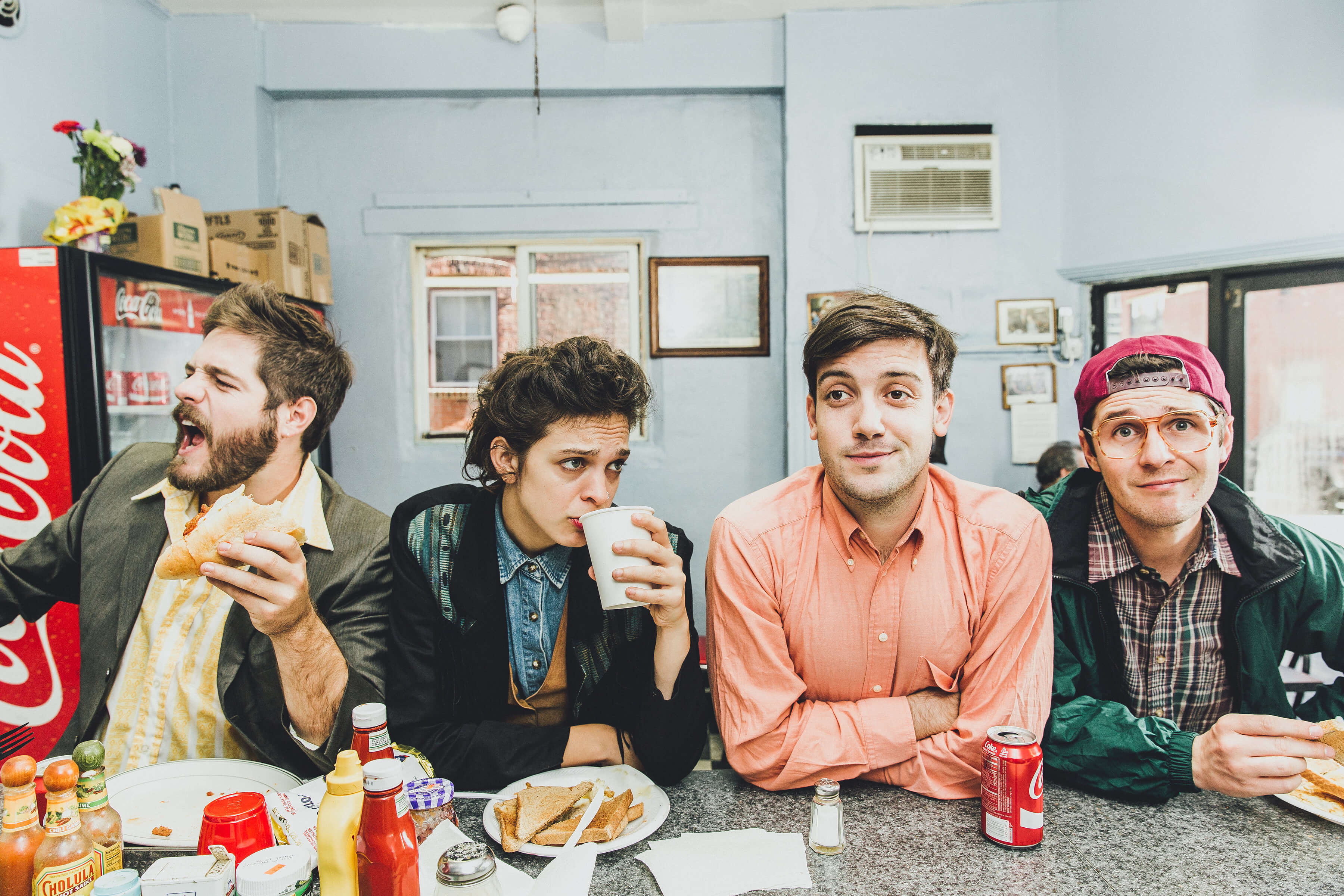 OS: You mentioned that you all have kind of moved all over the place recently. Do you still consider Mipso a North Carolina band, or are you more of a transient band now?

Sharp: We totally identify as a North Carolina band and own that as the place that led us to each other and the music that we make, regardless of where we call “home,” largely because we’re almost never home. Even when we were all living in Carrboro, we weren’t there frequently, but we definitely feel like that’s where our roots are. From an identity perspective, too, whenever anybody asks us where we’re from, the answer is Chapel Hill.

OS: That brings me to your show in Raleigh at the North Carolina Museum of Art on May 6, celebrating the release of Coming Down the Mountain. Did you all choose that venue for a particular reason to promote your album as opposed to somewhere like Cat’s Cradle?

Sharp: Yeah, we had our eyes set on it once we knew [the album] was going to be a spring release. We’ve always made records in different seasons; this one was recorded late last summer, and I think the energy of that season made its way onto the record. To be doing a spring release eight months later feels symbolic of the new life of songs and what that means for us on stage, especially. So we knew we wanted to be outdoors, and we had all gone to shows there last season and were just totally inspired by the space. It’s such a cool celebration of that part of the Triangle community that we love. We’ve also sold out the Cat’s Cradle like nine times, so a part of us thought that we need to keep things exciting for folks who have thankfully stuck with us over a lot of shows at the same venue. We wanted to let it be something different.

OS: Do you guys have any plans after the tour is finished?

Sharp: Oh man, the concept of the tour being done at some point just gave me a little wave of relief [laughs]. It feels like it’s not going to be done for quite a while. We’re touring pretty much straight through July, then we’ll have a couple weeks off, but then we’re doing the West Coast and some East Coast again after that. We’re also doing Europe for the first time in the fall. We’re running pretty hard with this album this year; I think it will end up being about 100 shows after the release.

It’s funny, our lives feel like they exist in this weird duality of condensed time on the road and then ever-evaporating time at home. I think we’re in a stage, individually and collectively, where we really value the communities that we’ve chosen for this year or two of our lives as places where we can decompress and stretch our creative legs in different directions. I think we’re all excited to be home and writing more, and I’m sure there will be another album quickly after this one.