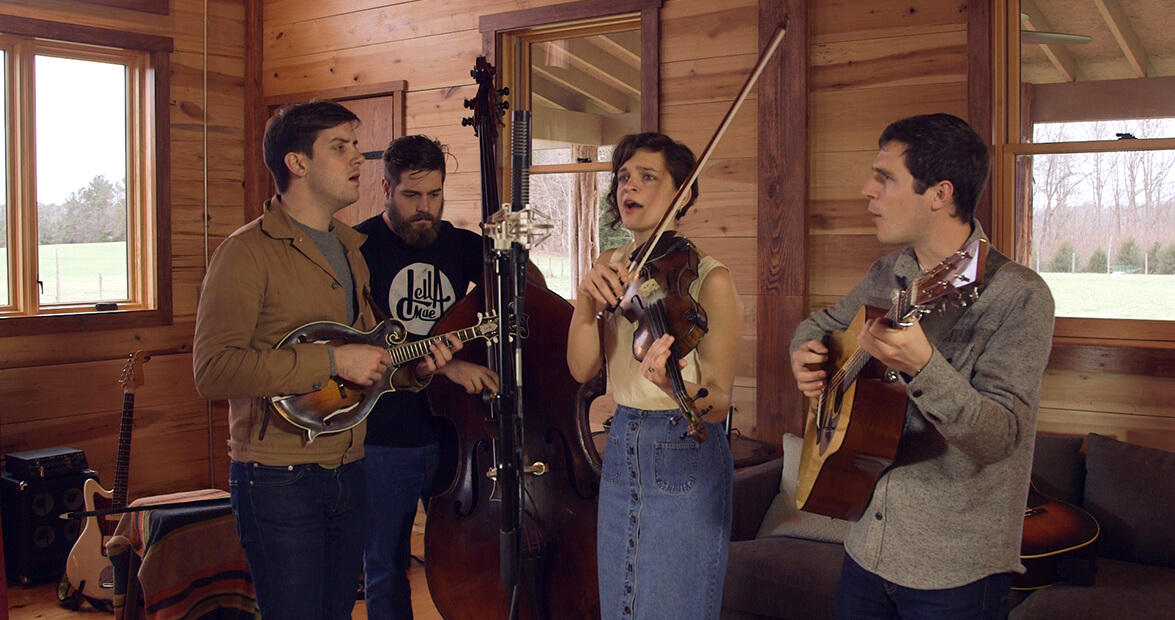 Since the band’s inception in 2011, Mipso has been busy: Selling out shows at Cat’s Cradle in Carrboro, playing with fellow North Carolina bands around the Triangle, writing new music, and traveling constantly. All graduates of the University of North Carolina at Chapel Hill and North Carolina natives, Joseph Terrell (guitar), Jacob Sharp (mandolin), Wood Robinson (bass), and Libby Rodenbough (fiddle) have toured across the United States and parts of Canada together. Terrell, Sharp, and Robinson even did a two-week tour in Japan in 2013, where they made a documentary titled Mipso In Japan. Nowadays their time spent in North Carolina is for relaxing and regrouping — then they’re back on the road.

Luckily, we were able to catch the ever-moving Mipso in between tours and film the band performing a few songs in one of its favorite rehearsal spaces. We found ourselves at what Terrell referred to as “the most beautiful barn in America,” a family friend’s farm in Mebane, where the sparrows dip and soar overhead, and where there is no shortage of meadow views and open skies. It would be hard not to feel inspired by such a pastoral setting.

Watch Mipso perform a cover of Guy Clark’s “Dublin Blues” and an original song, “Momma,” from their new album Old Time Reverie. They’re back on tour now, with dates into April 2016 – but we were able to catch up with Jacob Sharp while he and the others were en route to their next show. Read below to learn a little bit more about Mipso, their experiences on the road, and how they draw inspiration from their beloved home state of North Carolina.

Q: You toured for nearly 300 days in 2015 leading up to your newest album, Old Time Reverie, which was released last fall. How did that impact your music and the way you perform?

Sharp: Touring feels like one of the few constants in our world the past few years. We had a five-week break at the end of 2015’s relentless motion, and I found that it took me about two weeks to be comfortable being home and with a more normal routine. It affects every aspect of our lives. But for the sake of the music, especially in performance, we really gelled as a stage unit last year. One of the benefits of playing so much is you intrinsically know the place everyone occupies. That offers a level of comfort that lets you refine other aspects of the show, as well. I think and hope that our shows have really improved and become more consistent. It’s challenging to write on the road, but we’ve taken advantage of short breaks to workshop new tunes and revamp old ones.

Q: What do you each try to do when you have a break from touring and get to spend some time at home? What do you find comfort in?

Sharp: I find comfort in the guitars of mine that don’t fit in the van, exercising, friends and family, and cooking. I know we all look forward to space from each other and the music, and letting that space offer new writing times. We all enjoy touring, and relish opportunities to play around the country, but it’s good to be home. You need that balance.

Q: It’s impressive that Mipso has such an old-time sound, coming from such a young band. When did you each discover, or take a particular interest in, bluegrass and folk music?

Sharp: Joseph grew up a bit more steeped in some of these older sounds than the rest of us. His family has gathered around folk music for a while. For the rest of us, I think growing up in North Carolina, it permeated a bit. We were aware of the history and legacy of our surroundings. But it was in college at UNC that we dove more fully in to exploring these [musical styles] in depth. I just fell in love with bluegrass and folk music, eventually writing my thesis on it. Libby took a year off from UNC to study at the Old Town School of Folk Music in Chicago, and Wood came from the jazz scene, which of course also has a large legacy in North Carolina.

Q: Mipso used to be “Mipso Trio” before Libby Rodenbough became a full-time member. How did Libby come to join the band?

Sharp: Libby had been involved since the inception of the band. She was taking her year off of school at that time but recorded tracks from a studio in Chicago. As we progressed she would join us at our larger shows, and we started writing with her in mind. Being a year behind us in school, the timing was just a bit different in deciding to pursue the band full-time. As she approached her graduation in 2014, she joined full-time. It was a natural progression and something we’ve really benefited from.

Q: Having spent most of your lives in North Carolina, what kind of inspiration do you draw from your experiences here?

Sharp: Oh man. Well, we’ve all lived most of our lives in North Carolina. Our families and most vibrant communities are here. A good deal of our individual and collective formative experiences have occurred right here. It’s almost hard not to give the state an overstated amount of credit for our inspirational fountains. I mean, we are all proud to be from here, proud to still be based in the state. But there’s a lot about North Carolina, both in its legacy and current political state, that troubles me. I think those complications in identity are important. You should question how a place impacts you. Within our music, I hope we represent well the diversity of this state and its communities. And I think we celebrate well the bright spots of our history, especially an amazing musical and cultural legacy.

Q: Which artists, from North Carolina or elsewhere, have had the greatest influence on your music as individuals or as a whole?

Sharp: I’ll just speak for myself here. The artists who have had the longest impact on me are probably Tim O’Brien, Neil Young, Paul Simon, and Peter Rowan. More recently, I’ve been dialing in to a few newer artists. I love Dr. Dog, Margaret Glaspy is someone I think is about to become a household name, and Kristin Andreassen is a songwriter I really admire.

Q: Is there anything you’d like Our State readers to know about Mipso? Anything particularly exciting on the horizon?

Sharp: Be on the lookout for a big North Carolina show announcement soon, and a new recording before too long …