WATCH BELOW: Scroll down or click here to see Glas’s Owner Nate Sheaffer at work. 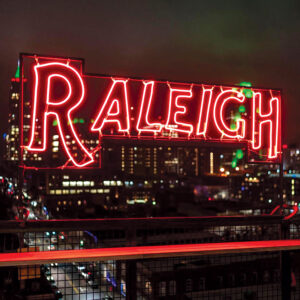 Richard Marvill is a tube bender at Glas, a neon studio at Dock 1053 near Raleigh’s Five Points. There, I took a one-day course to learn how to bend glass and make a neon sign. “Your Open sign will always be neon,” Marvill said as he demonstrated the machines that neon artists use to fill and electrify tubes after they’ve bent them into shape. “The red cuts through the dark.” Argon, another gas commonly used in neon art, glows bluish, and the additional colors come from colored glass or phosphorescent coatings in the tubes.

Apart from being a business that creates signs and art, and that teaches people like me how to do the same, Glas is something of a found-neon museum. Inside, hundreds of vintage signs glow along its brick walls: a white Food Lion, a green-and-red 1920s Bonk’s Cleaners, a green Fidelity, and big red Eat and No Parking signs. You can’t avoid letting out an open-mouthed, breathy Ooh.

Beyond the walls of Glas, neon signs, both old and new, shine from the Blue Ridge Mountains to the Outer Banks. Our family once stayed at the Mountaineer Inn in Asheville specifically because of its astonishing, gigantic neon hillbilly, which manages somehow to be both ridiculous and inoffensive. More recently, Durham added an enormous bright red neon bull to the American Tobacco campus during its 21st-century renovation.

The first neon in the United States glowed in the early 1920s, probably in New York or California. In 1949, Raymond Chandler’s detective Philip Marlowe gazed in wonder: “There ought to be a monument to the man who invented neon lights. … There’s a boy who really made something out of nothing.” 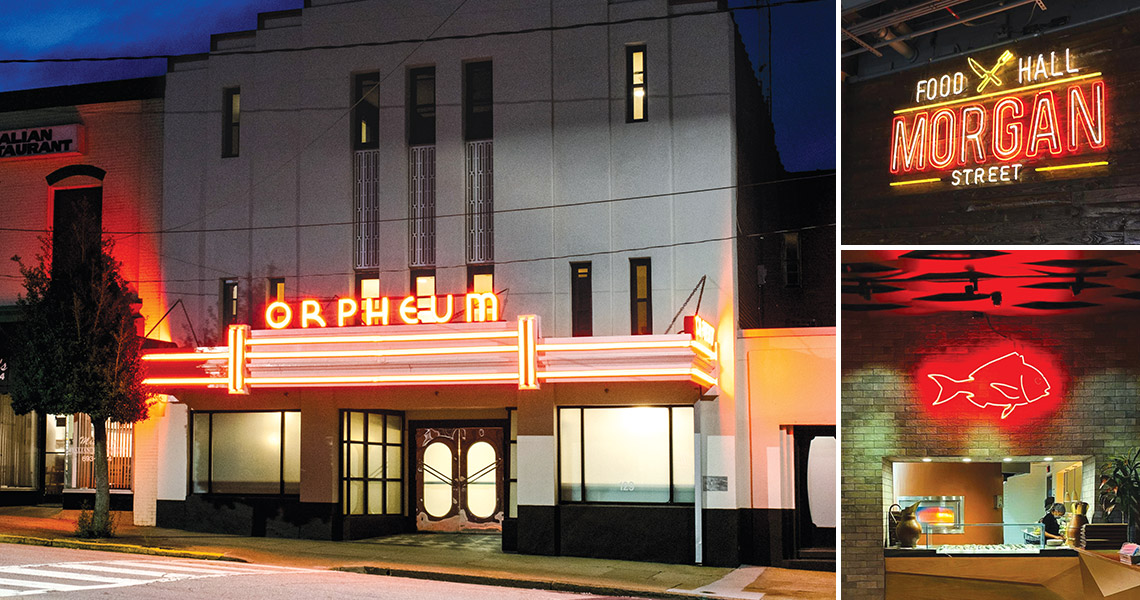 The studio created the sign for the Orpheum Theater in Oxford. And neon shines all across Raleigh, from the Morgan Street Food Hall to Vidrio Restaurant. photographs by ANNA ROUTH BARZIN, COURTESY OF GLAS

Almost true. A French scientist first noticed a glow from mercury vapor in a barometer tube in 1675. It wasn’t until 1898, though, that British scientists discovered neon, which you can find in our atmosphere at the rate of one particle per 65,000 — something out of nothing indeed. With the invention of vacuum tubes, researchers started filling them with various gases and seeing what happened if they zapped them with electrical current. One scientist found that neon glowed a delightful red, and he displayed it in Paris in 1910.

“The blaze of crimson light from the tube told its own story and was a sight to dwell upon and never forget,” said one of neon’s discoverers.

I remember my first neon Ooh in front of a red-and-green sign at a Chinese restaurant when I was a little kid. You probably recall one of your own. Nate Sheaffer, Glas’s founder and presiding artist, does. When he was 13, he visited his sister, who lived in Harrisburg, Pennsylvania, and saw a bar, La Rose Rouge, with a fantastic neon rose above the entryway. “I was blown away by it,” he says, “and that was when I figured out, looking carefully at it, ‘Oh, those pieces had to be made by somebody.’ ” He went on to make understanding and mastering neon art the focus of his life. 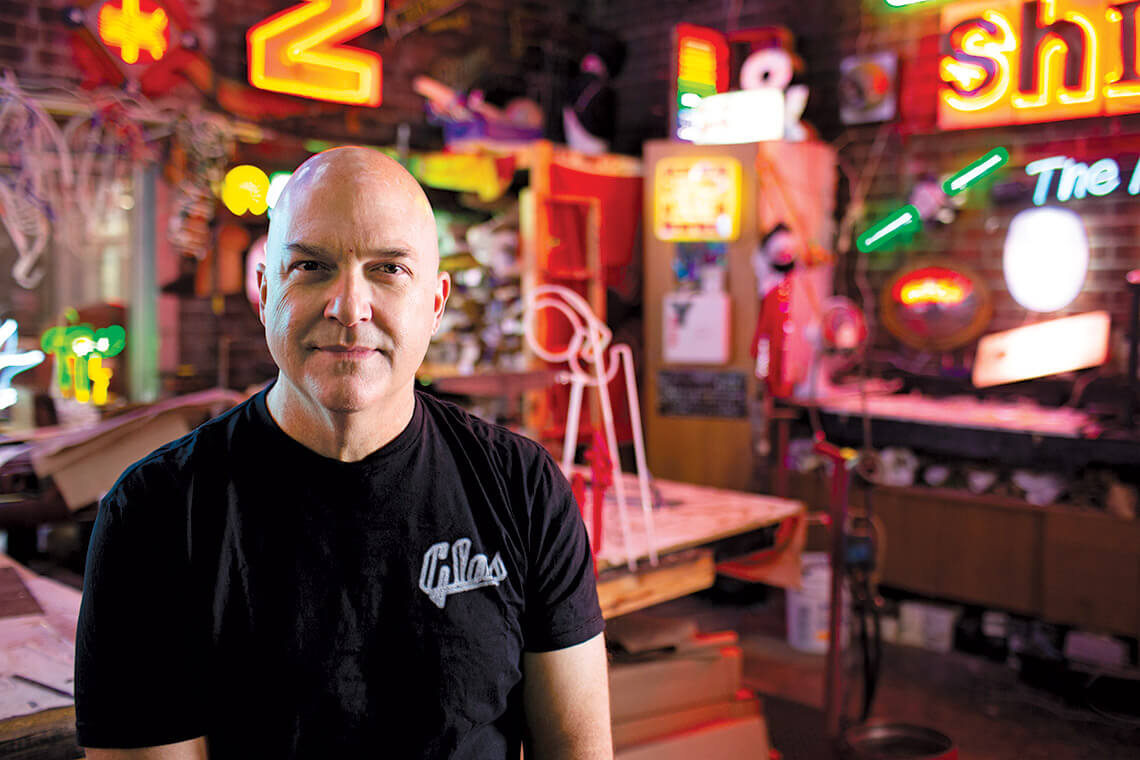 Sheaffer learned the very basics as a student at the University of North Carolina at Chapel Hill and started his first studio when he graduated in the 1980s. He’s gone up and down with the craft. Thousands of neon workers lost their jobs around 2000, when a lot of neon production work moved to Asia. Others lost work as the combined result of the 2008 financial crisis and the emergence of LEDs, which some compare to neon. Don’t kid yourself. Neon is neon; nothing else creates that Ooh.

These days, Glas never lacks for work — shops and restaurants, clubs, events, and collectors all clamor for neon. Just the same, Sheaffer estimates that there are now only about 350 full-time neon glassworkers in the United States. “There are more plumbers in Wake County than neon workers in the country,” he says.

Partially to resupply that worker base — but mostly just because neon signs are cool — Glas offers courses: a six-session class that allows folks to design and create a big, complex sign, and a one-day “diet” class in which students choose a simple design, learn basic bending, and complete the major gestures of the sign, after which the Glas experts do the complicated filling and electrifying.

Taking the one-day class was one of the great art experiences of my life. “You want to work with the glass, not against it,” Marvill explained as he taught me to let gravity gently pull a sway into a melted rod, which I would then coax along the design pattern during the six to 10 seconds that the tube stayed soft enough to bend. In four hours, I got a tour of the shop, a survey of techniques, and enough practice to get a sense of what I was doing. This allowed me to outline, in blue-and-green tubes, an acorn, about a foot in each direction.

I left the place vibrating with excitement. But that was nothing compared to what I felt when I came back to pick up my sign and saw it in the shop, its blue cap and green shell magically, mysteriously, glowing. Ooh.

Related: Most of the neon signs that once illuminated motels, theaters, and restaurants across the state have been replaced, but a few glowing examples of this nostalgic art form are still lovingly preserved as icons of a bygone era.