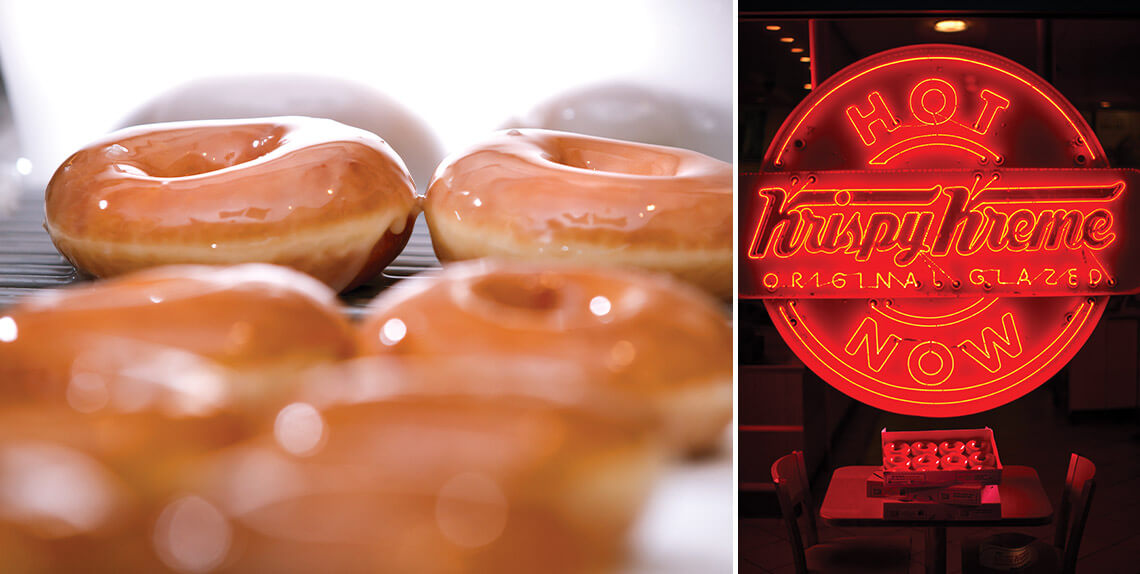 Not willing to leave hot doughnuts to chance? The Krispy Kreme app tells users when a Hot Light is illuminated near them. Vernon Rudolph would be proud. photographs by Jerry Wolford & Scott Muthersbaugh

When, in the late 1930s, Vernon Rudolph cut a hole in the wall of his wholesale doughnut business to serve customers lured by the scent of hot fried dough, he opened a window into the secrets of mechanized doughnut production in Winston-Salem. In the 1980s, another sneak peek into the process came when, rumor has it, a store manager wrote “HOT DOUGHNUTS NOW” in red paint on a spring-loaded window shade, which he’d roll down whenever the doughnuts were coming fresh out of the fryer. Sales at his store supposedly increased so much that Krispy Kreme installed neon signs, now known as Hot Lights, in all of its stores. The bright, eye-catching neon allowed customers driving by to spot when the sweet treats were being made, rather than relying solely on their noses. 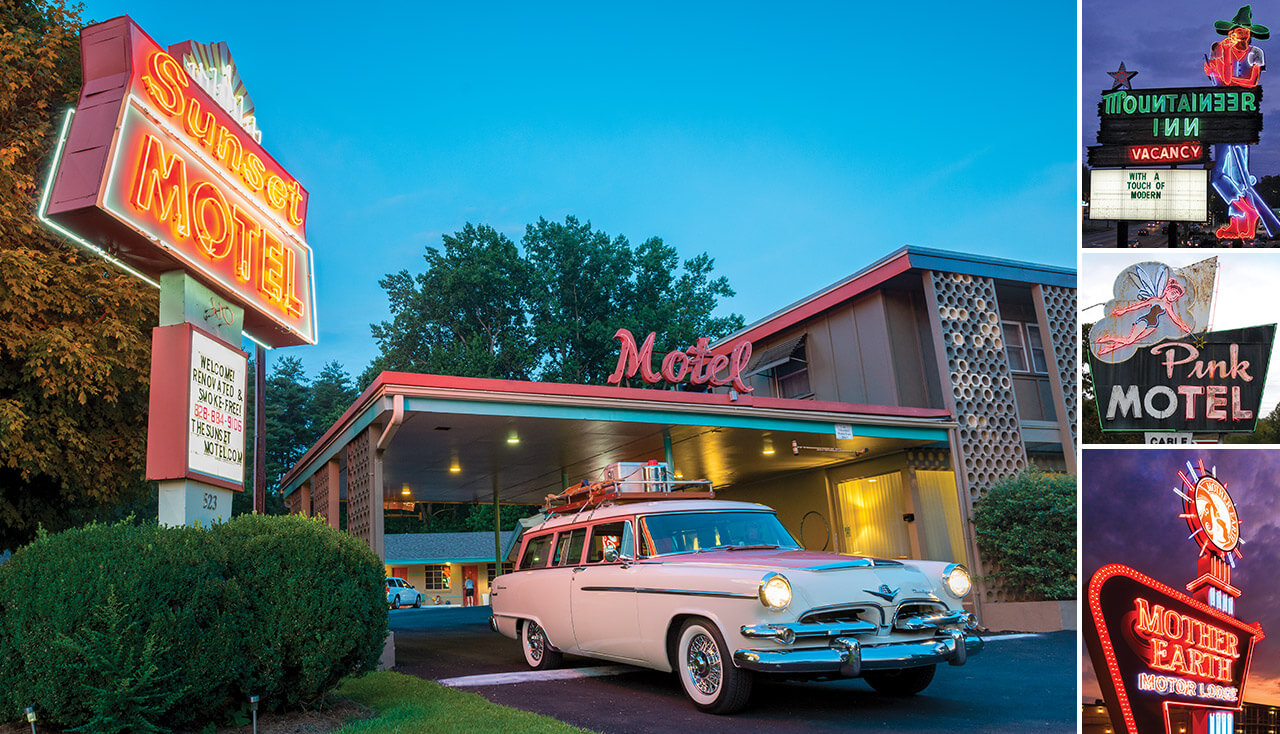 Brevard’s Sunset Motel sign, prized for its vintage look, was once featured in a Marlboro ad, as well as in a music video by western North Carolina singer-songwriter Nikki Talley. photographs by EMILY CHAPLIN, ROADSIDEARCHITECTURE.COM, BAXTER MILLER

Leave the light on

Perhaps nothing symbolizes the American motor lodge — which rose in popularity to support a growing wanderlust following World War II — more than the buzz and glow of a neon sign. Before the age of online booking, motorists often found a room for the night simply by turning in at those gleaming red letters spelling out “VACANCY.” Luckily, these icons of Americana can still be found at vintage motels from the mountains to the coast. On U.S. Highway 64 in Brevard, the Sunset Motel opened in 1955 and, in an issue of The Transylvania Times from the same week, proudly advertised “cold and hot running water” in each of its 10 rooms. Across the state, Asheville’s Mountaineer Inn sign, Cherokee’s Pink Motel sign, and Kinston’s Mother Earth Motor Lodge sign are still beacons for weary travelers. 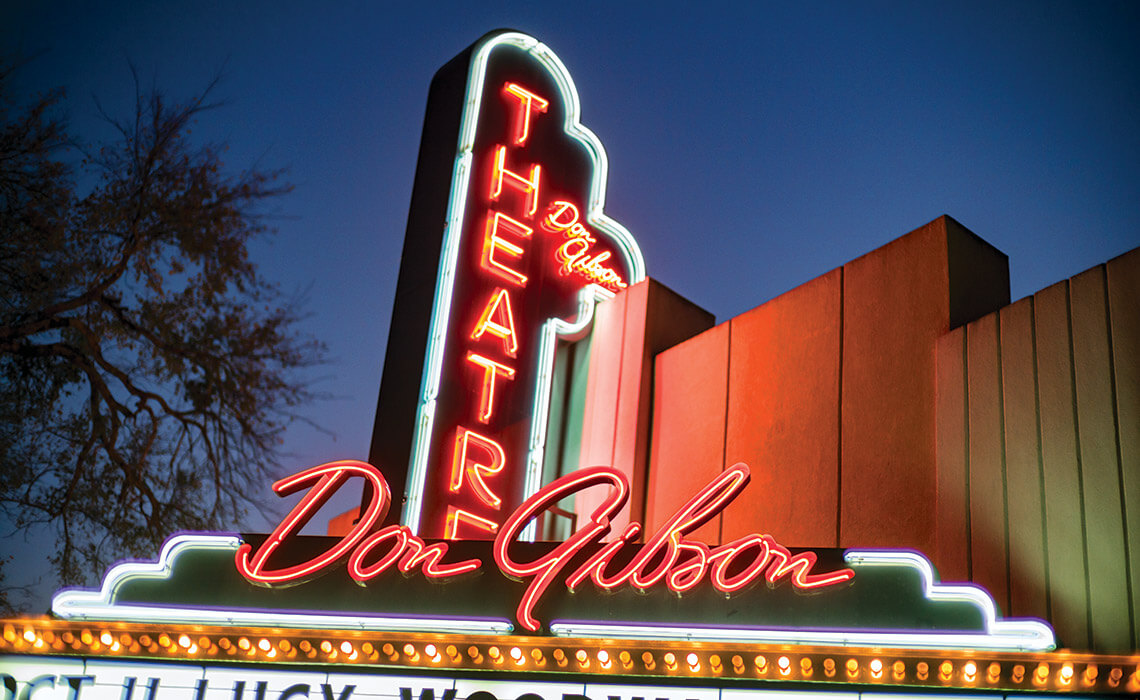 The Don Gibson Theatre hosts a variety of musical acts and sometimes screens classic movies from 1939 — the year the venue opened — like The Wizard of Oz, Stagecoach, and Gone With the Wind. photograph by Charles Harris

The people of Shelby were in awe of the State Theatre when it opened in 1939, hardly believing that something so modern could be in their small town. The theater was a state-of-the-art, Art Deco-style building with sweeping, curved walls and novelties like padded seating and forced-air heating and cooling. The towering marquee listed first-run films, including hits like The Big Sleep with Humphrey Bogart and Lauren Bacall, Road to Morocco with Bob Hope and Bing Crosby, and Disney’s The Jungle Book. The theater operated for half a century before shutting down in the 1980s, and the marquee remained dark for nearly three decades while the building sat dormant. In 2009, the venue was renovated and reopened as a concert hall and occasional movie theater. The sign was restored to its original glory — with the addition of the name Don Gibson, a Shelby-born country music star. 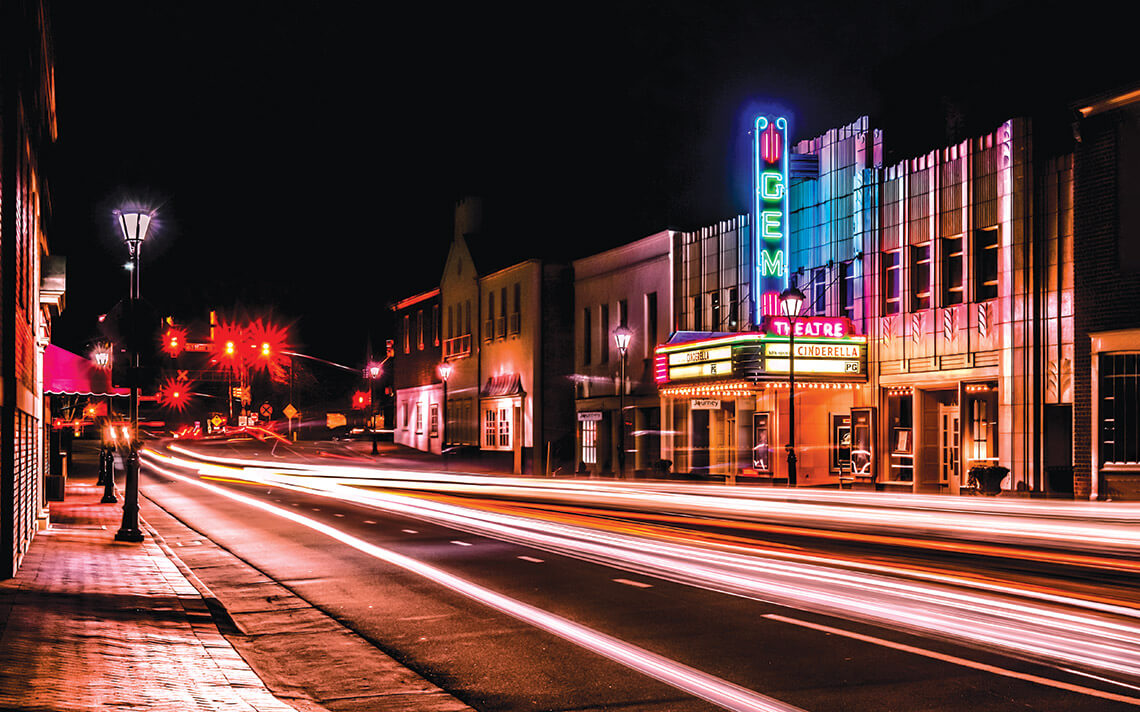 First-run movies continue to be shown at the Gem Theatre, just like they were when it opened in 1936. photograph by CABARRUS COUNTY CONVENTION AND VISITORS BUREAU - VISITCABARRUS.COM

Before televisions were commonplace, the 1936 Gem Theatre was a primary source of entertainment in Kannapolis. Live acts featuring entertainers like Western star Roy Rogers and his horse, Trigger, would kick off the show. Then, the screen would roll down, and the picture would begin. Movies were promoted with elaborate displays staged around the marquee, like military Jeeps parked outside when war pictures were shown. In 1942, the back portion of the Art Deco building was destroyed by fire, but the facade, lobby, and projection room were saved, and the marquee remains almost identical to the way it appeared in 1936. While modern companies have proposed changing out the neon lights for more cost-effective LED bulbs, General Manager Steve Morris believes that nothing can replicate the brilliant color — and the nostalgic buzz — of real neon. “We’ve seen so many other things [in Kannapolis] change and go away,” he says. “But this is the one place that has been frozen in time.” 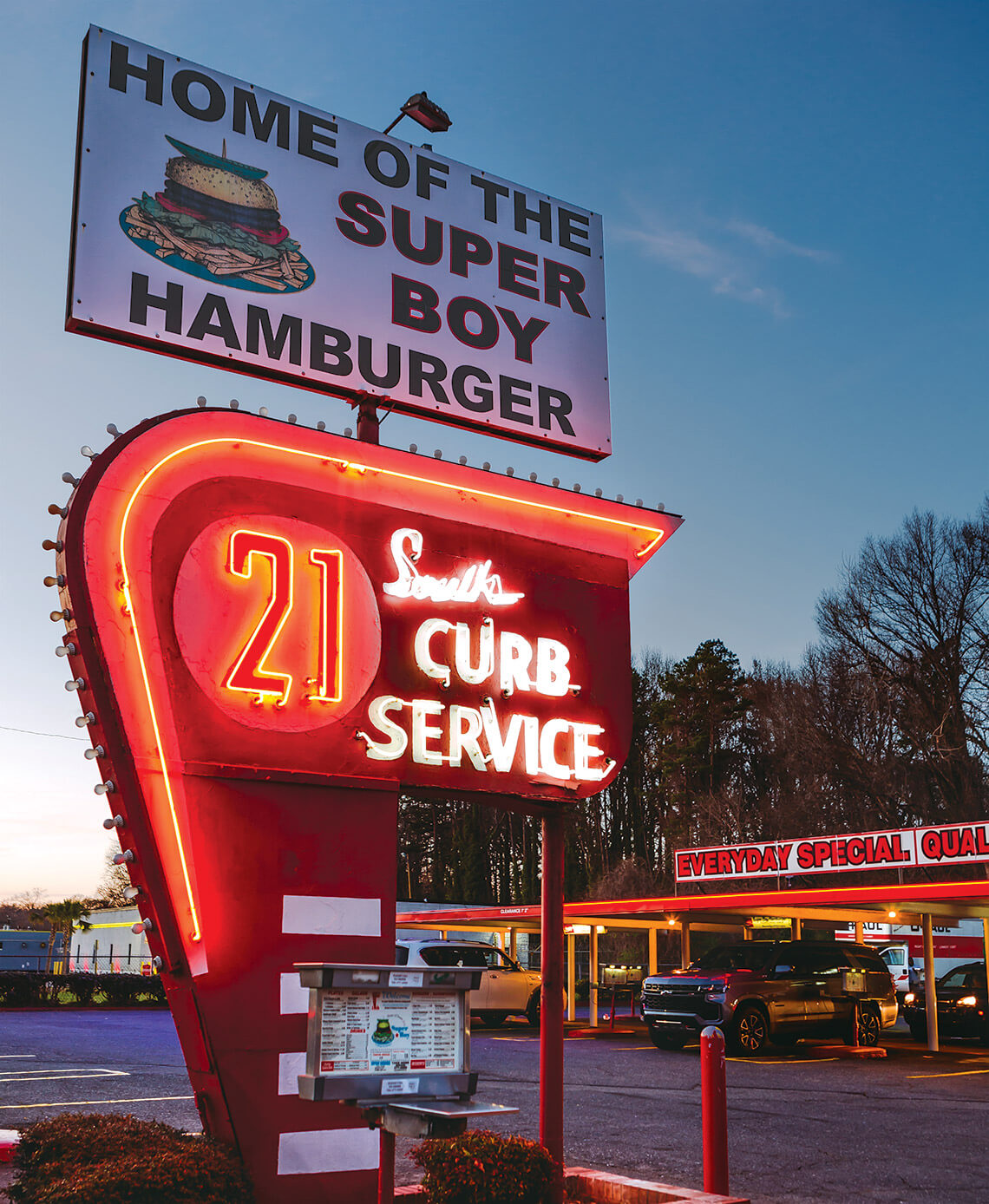 Neon signs are few and far between in modern-day Charlotte, but at South 21, which opened in 1955, original works still stand. photograph by Joshua Vasko

Like the neon signs that once drew hungry customers to drive-in restaurants across the state, the days of driving up, honking your horn, and having a carhop appear at your window have all but disappeared. But at South 21, customers find a neon sign promising all of that plus the Super Boy, a double hamburger with mustard, onions, lettuce, and tomato. Owner George Housiadas, along with his longtime customers, sees the sign at his 1950s burger joint as a symbol of the restaurant’s longevity — and of the ’50s and ’60s. 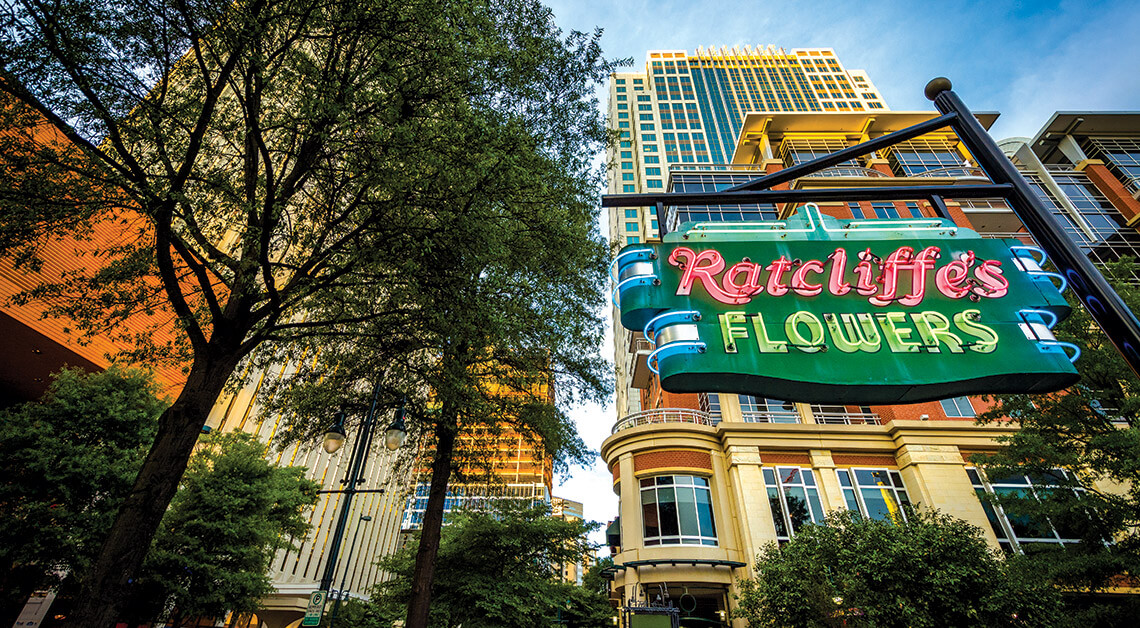 At the former site of Ratcliffe’s Flowers, which opened in 1929. photograph by © JON BILOUS/DREAMSTIME.COM

In a city that’s ever-changing, the Ratcliffe’s Flowers sign has shone on Tryon Street for nearly a century. Crafted by Ernest Grady, a statewide pioneer in the art of neon, the Art Deco-style sign was installed in 1929 on a new building commissioned by Louis Ratcliffe Sr. during Charlotte’s building boom. Neon signs continued to pop up in the area, but as change continued into the 1960s, many businesses agreed to remove them in favor of more modern designs. Louis Ratcliffe Jr., who had taken over his father’s shop, refused to take his down. “At that time, it was just another sign that downtown business associations wanted gone,” says Christopher S. Lawing, founder of the Charlotte Signs Project, which documents and preserves the city’s historic signage. “Today it is hailed as a beautiful piece of cultural art.” Ratcliffe’s closed in the 1980s, but the sign remained. In 2000, the building was relocated, and the sign was later removed, restored, and reinstalled at 431 South Tryon Street, where it was honored with a relighting ceremony. 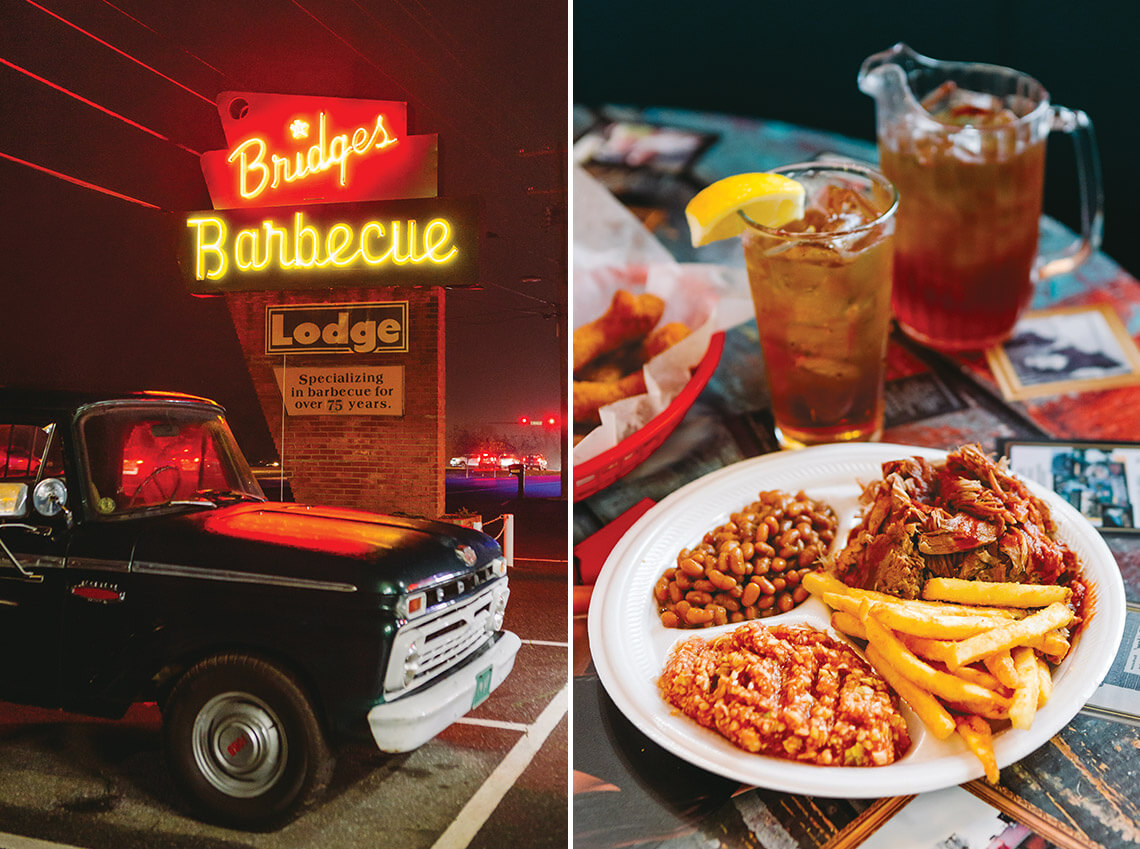 Over the years, celebrities who’ve eaten the famous pulled pork and red slaw at Red Bridges Barbecue — including Richard Petty and Billy Graham — have posed for a photograph with the restaurant’s neon sign. photographs by Joshua Vasko

At Red Bridges Barbecue Lodge in Shelby, a neon sign has long attracted those seeking a taste of down-home North Carolina. The sign was installed in the 1960s, shortly after Red Bridges passed away, leaving the business in the hands of his wife, Lyttle. Red and Lyttle are gone, but customers know when they see that neon sign that they’ll be getting barbecue made the exact same way as when Red started the restaurant more than 70 years ago: pit-cooked overnight over a bed of hickory and oak coals, topped with a ketchup-and-vinegar-based sauce. Across North Carolina, neon signs are icons of our long-standing barbecue joints — whether you’re passing through Lexington on Main Street and spot the red, all-caps lettering of the Bar-B-Q Center sign or cruising down U.S. Highway 158 in Weldon and catch a glimpse of the loopy green “Ralph’s” lettering surrounded by a playful pig. 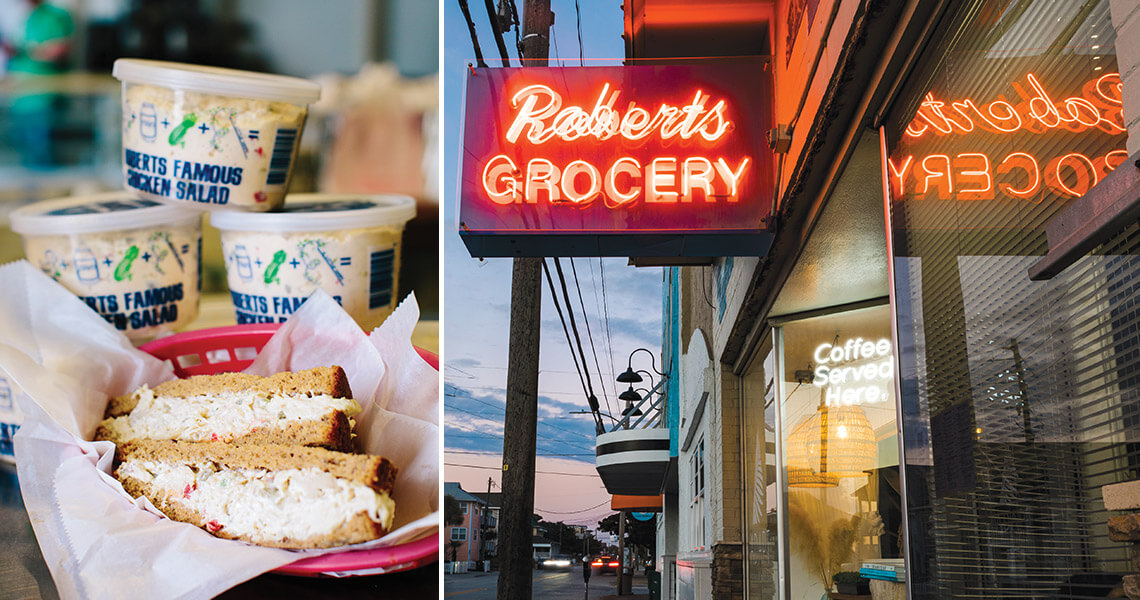 The chicken salad at Roberts Grocery is as legendary as the store’s sign. On busy summer weekends, beachgoers gobble up hundreds of sandwiches. photographs by Matt Ray Photography

The sign hanging over the front door of Roberts Grocery — reportedly Wrightsville Beach’s oldest continuously operating business, having served the community since 1919 — is almost as famous as the chicken salad you’ll find at the deli inside. The sign is the second iteration of neon to grace the front of the business. The first, which simply read “Roberts,” was replaced by former owner Eva Cross in the 1970s with a new sign that included the word “grocery,” indicating that the store offered more than just convenience items. Today, the sign lights up the hearts and memories of beachgoers as they drive over the drawbridge onto the island, looking to fuel up for a day on the sand. 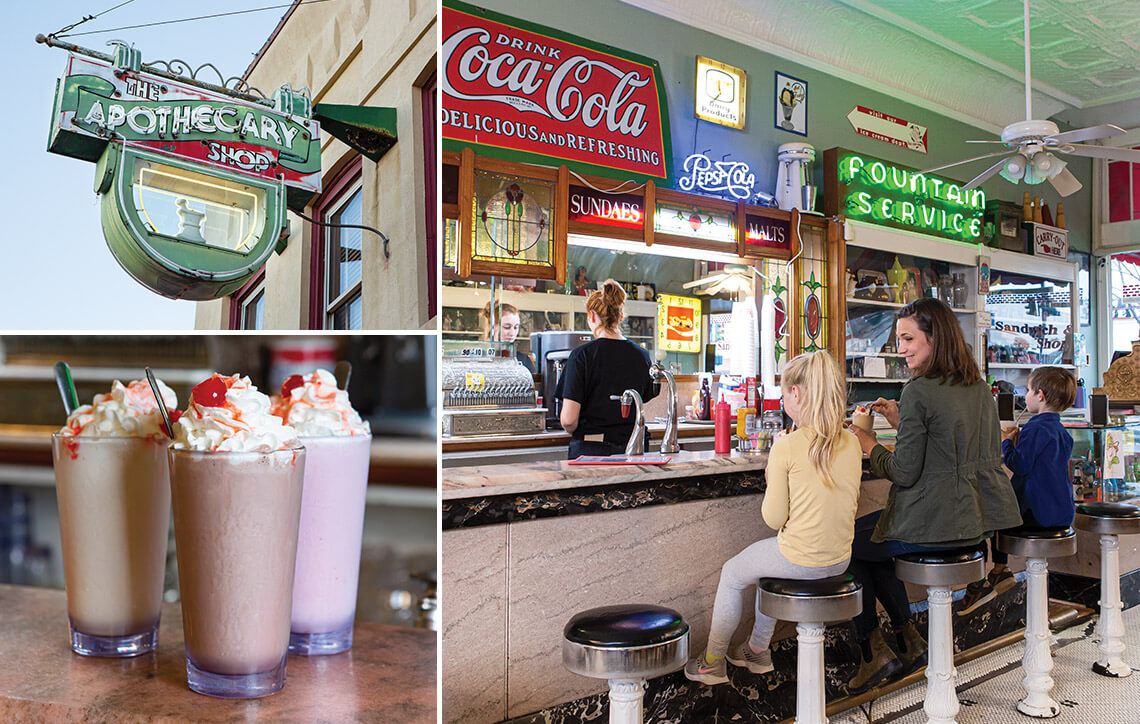 Mike’s on Main is the most photographed restaurant in Hendersonville, and for good reason: The hand-spun milkshakes, restored Coca-Cola mural, old-fashioned soda fountain, and neon signs are snapshots of the past. photographs by Tim Robison

Home to the first — and only remaining — soda fountain in Hendersonville, Mike’s on Main still sports the original wood cabinets and ornate ceilings that the building featured when it opened as Justus Pharmacy in 1900. Owner Patty Adamic creates a nostalgic feel that harks back to the days of soda jerks and sock hops: A 1950s-style jukebox in the back corner plays classics by Elvis, Patsy Cline, and Nat King Cole. The menu offers long-popular beverages like Cheerwine, root beer floats, and old-fashioned ice cream sodas. And neon signs hang above the front door and over the counter inside. Today, Mike’s on Main remains a gathering place for Hendersonville, just as soda fountains were for towns across America in decades past.

Nate Sheaffer, the founder and presiding artist at Glas, a Raleigh neon studio, remembers the first neon sign he ever saw. When he was 13, he visited his sister, who lived in Harrisburg, Pennsylvania, and saw a bar, La Rose Rouge, with a fantastic neon rose above the entryway. “I was blown away by it,” he says, “and that was when I figured out, looking carefully at it, ‘Oh, those pieces had to be made by somebody.’” He went on to make understanding and mastering neon art the focus of his life. He’s gone up and down with the craft. Thousands of neon workers lost their jobs around 2000, when a lot of neon production work moved to Asia. Others lost work as the combined result of the 2008 financial crisis and the emergence of LEDs, which some compare to neon. Don’t kid yourself. Neon is neon; nothing else creates that Ooh. These days, Glas never lacks for work — shops and restaurants, clubs, events, and collectors all clamor for neon.