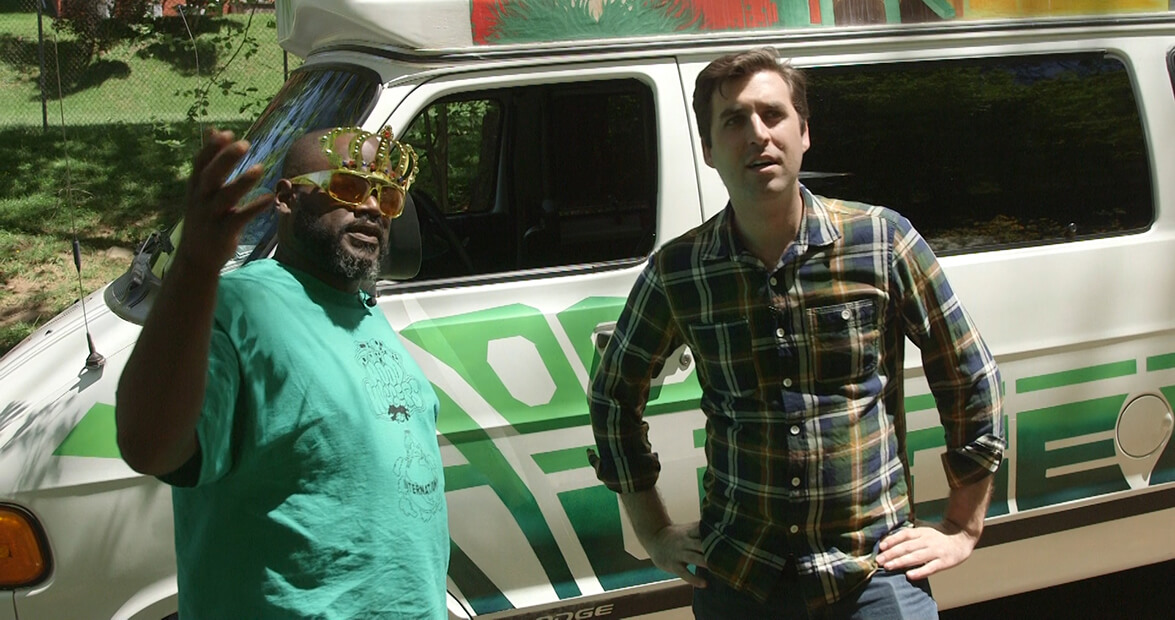 DeWayne Barton, founder and CEO of Hood Huggers International, LLC, dons a pair of comically large sunglasses with a gold crown attached as he ushers tour-goers into his colorfully-painted Hood Tours bus. He is, after all, somewhat of a king in Asheville’s Burton Street community, with the bus acting as his chariot.

Barton was born in Asheville, where his mother grew up as well. He lived in Washington, D.C. in his early adulthood and moved back to Asheville in 2000. When he did, he noticed a change.

“It began with a conversation with my mother,” Barton says. “She was talking about her time growing up here in this city, and then I just started seeing a lot of historical landmarks being torn down.”

Most of the African American businesses that he used to know were closed, or completely gone. Barton saw his community’s history being overlooked and overshadowed by the growing popularity of Asheville as a tourist destination.

“I remember one day going to the Chamber of Commerce and asking, ‘Is there an African American tour company here?’” Barton says. The answer was no, because no one had shown any interest in such a venture before. So Barton took matters into his own hands, resulting in the creation of Hood Huggers International, with “The Art of Resilience” as its tagline.

“I was afraid at first, because I didn’t see it happening,” Barton says. “But I felt it was important. I started asking myself how Hood Huggers could be used to tell a story of African American history but also be an economic drive to promote businesses and individuals in the area.”

Barton’s first order of business was to shed a new light on the Barton Street neighborhood in West Asheville by building a creative space for art, music, and community. In an area once known for its dangerous drug activity, Barton and his wife, Safi Mahaba, co-created the Burton Street Community Peace Gardens, built entirely from the trash that had littered the neighborhood.

The garden itself is an astonishing work of art, featuring sculptures and paintings, interactive spaces, a stage for music or shows, a community library, and a garden with flowers and produce.

“When we were first thinking about creating this space, there was crime, drugs, trash everywhere — what could come out of this place?” Barton says, gesturing to the Peace Garden around him. “This was the foundation that we had to clear up and repair and build. But once the foundation was established, it began growing these other shoots, these other opportunities. And what came out of it was this Peace Garden, and three businesses, and a successful nonprofit.”

Hood Huggers offers two types of Hood Tours — walking and driving — and both act as a means of preserving Asheville’s African American history, as well as educating locals and visitors about its existing presence and community efforts. Walking Tours of the Burton Street community (West Asheville) and East End Valley Street (downtown) are available for groups of 5 to 20 people. These walking tours typically begin at the Burton Street Community Center and conclude at the Peace Gardens.

Barton’s driving tours can accommodate 5-9 people (as well as private tours) and begin at the Stephens-Lee Recreation Center. Originally a black high school built in 1921, Stephens-Lee High School provided quality education for Asheville’s black community, with many graduates becoming Ivy league scholars. Stephens-Lee was closed in 1965 when schools were integrated, but has been given a new life as a recreation center in this revived community.

From here, Barton will direct visitors’ attention across the road to Pack Square, the site of the old slave market. Envisioning Pack Square’s past is a stark contrast to what’s there today: a bustling downtown filled with shops, restaurants, and tourists from all over the country.

“I think history is identity,” Barton says. “History allows us to say, We tried that before, and it wasn’t good. Let’s not do that again. History is inspiring.”

The driving tour moves to Triangle Park, stopping at a particularly significant mural, a project led by Molly Must and completed by six local artists and a number of community volunteers. The 270-foot long mural, consisting of both painting and mosaic, is a portrayal of the area’s African American history. The mural includes a portrait of Nina Simone (a North Carolina native born in Tryon), a depiction of the prison-industrial complex, and the faces of young black children; a symbol of the future.

Barton makes more stops along the way, pointing out old buildings or areas where businesses once owned by African American families have been lost to gentrification. He also makes a point to promote existing businesses and grassroots initiatives. Every tour participant receives a copy of the Hood Huggers Green Book, a directory of local African American-owned businesses.

It’s clear that Barton believes that there is still work to be done when it comes to informing locals and visitors alike his city’s African American history, but he is committed to this mission because Asheville is his home, and always will be.

But you don’t have to just take Barton’s word for it. Whether you’ve lived in Asheville for 20 years or are just visiting for the weekend, book a Hood Tour and experience the Art of Resilience for yourself.