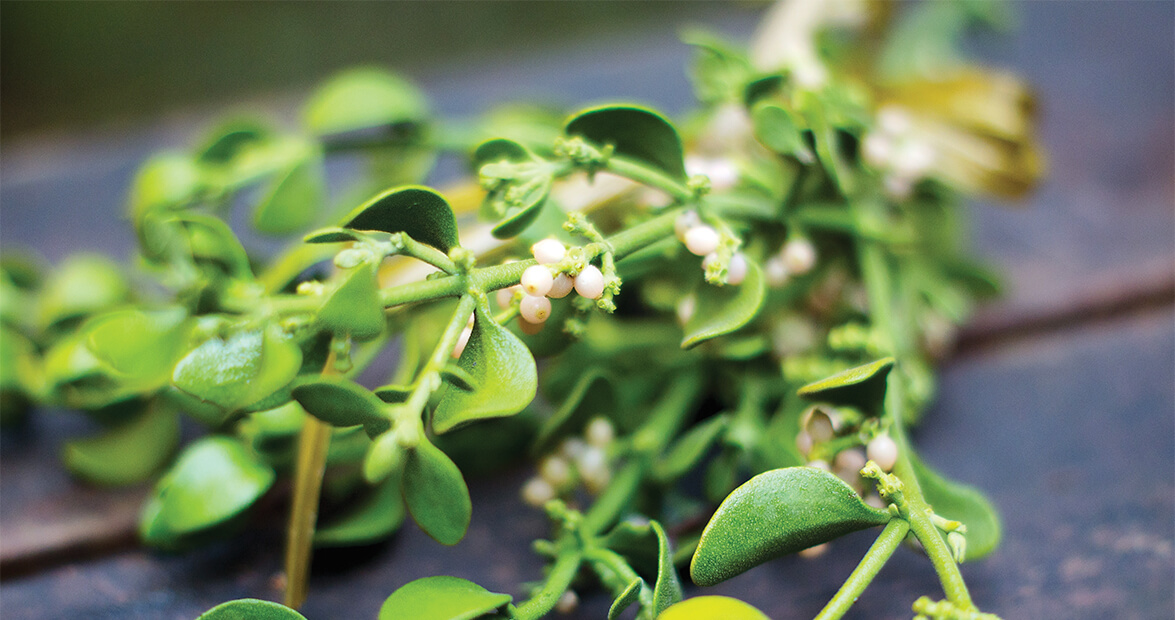 Mistletoe doesn’t float. You’d think it would, right? It looks like a tree branch. It’s found sticking, almost exclusively, out of other tree branches. But tree branches, for the most part, always come bobbing back up to the surface. The mistletoe hits the water and slowly sinks.

Joe Huff is hip to this fact, so when he sets out on the Cashie River in Windsor on a cold December day, he has a long-poled net along with his tree trimmer. He pushes his pontoon boat away from a dock at the Roanoke/Cashie River Center and gets going. The water’s smooth as glass, and the boat just glides over it, heading south. Immediately, Joe starts staring up into trees. The leaves are gone, and the trunks are gray, but the mistletoe is dark green and bushy. When it’s cast against a bright blue sky, it sticks out. “It’s the only green thing up here,” he says.

Joe wants to find some mistletoe with white berries. That’s what most people want: the perfect specimen to hang in their homes. Green stems. Green leaves. And especially the berries, which are pretty to look at, but toxic to eat. For humans, anyway. Birds can digest them just fine, and then when the seeds are either flung from their beaks or come out, uh, the other end, they stick to whatever tree they land on. Eventually, the mistletoe bores its way into a branch or trunk and starts sucking water and nutrients from it. Yes, this plant, which you are supposed to kiss beneath, is a freeloader. That said, when the opportunity for a kiss presents itself, and you pull close the one you love, this is not the time to explain that this green thing dangling just above your heads is a parasite. 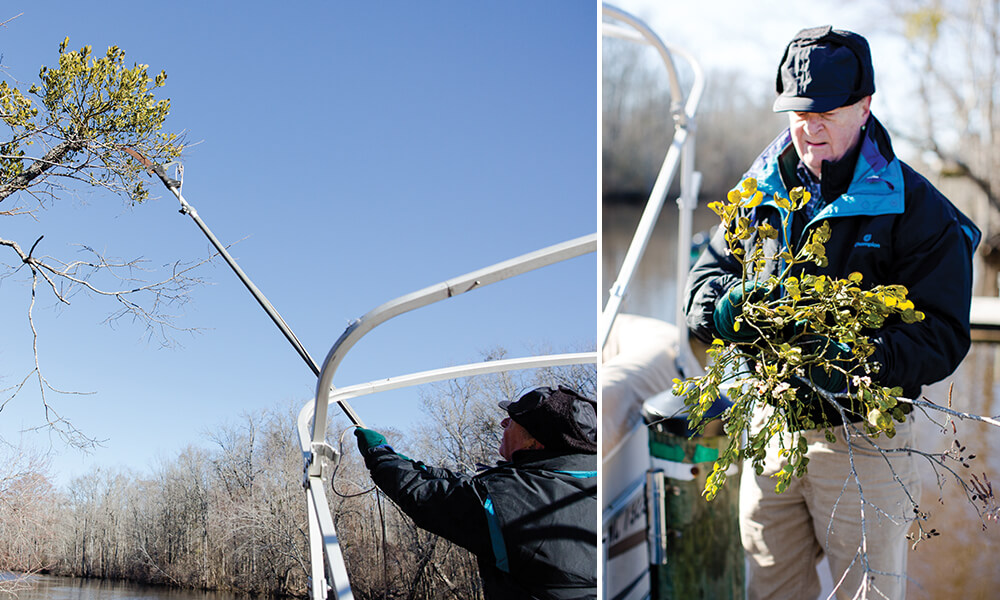 Here, Joe Huff demonstrates the three-step process for harvesting mistletoe along the Cashie: First, get on the boat. Next, saw off a branch. Finally, grab it before it sinks. photograph by Jon Black

And, about the kissing part: The tradition dates back to Norse mythology, when the only thing that was able to kill a god named Baldur the Beautiful (side note: excellent name) was a dart poisoned with mistletoe berries. Baldur’s mother then banned mistletoe use in weapons, and instead decreed that she would kiss anyone who passed underneath it. So, to recap, mistletoe is a toxic parasite that’s been implicated in the homicide of a Norse god. Pucker up.

Still, the pull of real mistletoe is strong enough that Joe, the director of the River Center, leads at least one mistletoe-hunting trip on the Cashie every December. The boat holds 10 people, and many of the same folks come back year after year. Mistletoe’s not hard to find in eastern North Carolina, especially in trees surrounded by dry land, but the act of hunting for it while going on a cruise is a good combination. “We don’t go real fast,” Joe says. “Or real far. Doesn’t take long.” That’s probably as good a sales pitch as any for a chilly boat ride: It’ll be cold, but if we do actually splash you, we’ll be back on land soon.

On this trip, Joe is still looking for mistletoe with white berries that’s low enough to reach with his trimmer. Back in the day, “we would shoot it out,” Joe says. With a shotgun. “The thrill was in the shooting,” he says, boyishly, before adding a fatherly disclaimer: “We don’t do that here.” But after a mile and an hour of looking, Joe turns the boat around, empty-handed. That’s when a low limb appears, just full of leafy green bunches. Joe reaches up and starts sawing some off, and the whole thing drops into the river and … uh-oh. As the mistletoe starts to sink into the black water, Joe smoothly leans down with a net and snags it, just in time. Because the only thing worse than a water-sucking, poisonous, mythically murderous plant would be letting it go to waste.