A boyhood fascination with Winston-Salem’s landmark “Ship House” captured Will Spencer’s imagination. The distinctive house designed by Luther Lashmit was inspired by the Bauhaus art movement, though it indeed resembled an ocean liner. Built in 1941, it had been the stately home of R.J. Reynolds Jr. (known as Dick) and was passed down to his sons, who gifted the property to Wake Forest University. Their generosity, however, did not result in saving the architectural marvel for future generations.

Will remembers when the Ship House was demolished in 1978. By then, he was a teenager, but the house and the men who designed and built it left a lasting impression. “Dick loved ships and sailed and fished,” Will says from the living room of his own ship-inspired house on Figure Eight Island. “And I love ships and to sail and fish.” 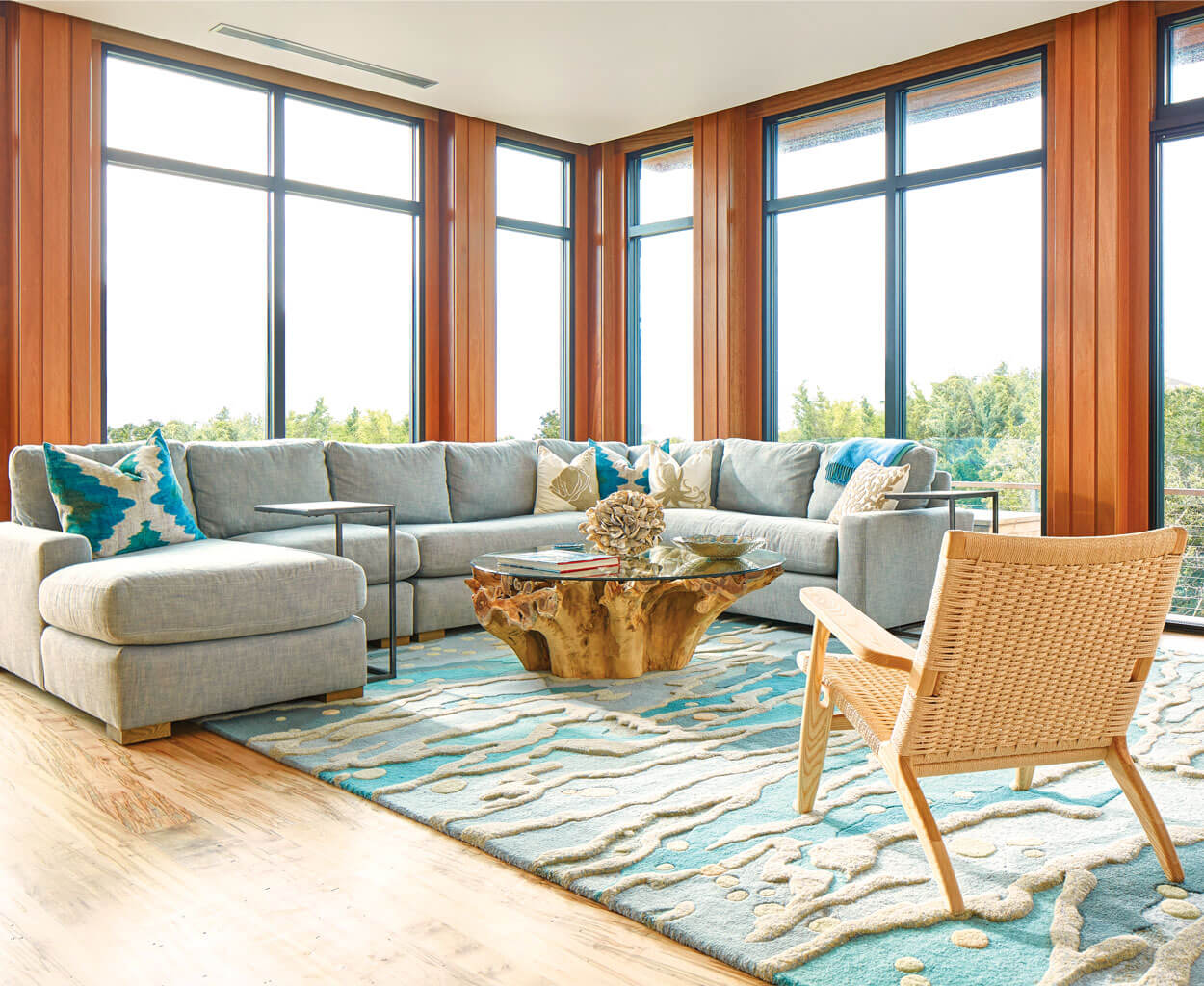 Following the modernist mantra “outside in,” the sea is echoed in the Spencers’ living-room rug. photograph by michael blevins/MB Productions of nc

Like Reynolds, Will, too, built a house that is anything but ordinary. In so doing, he and his wife, Christy, helped renew interest in the modern architecture that had flourished on the barrier island in the 1960s. Back then, the private enclave on North Carolina’s southern coast was a blank canvas for modernist architects, whose designs were inspired by swaying marsh grass, gnarled live oaks, high sand dunes, and the vast Atlantic.

Bearing freshly inked degrees from NC State’s school of design, architects John Oxenfeld and Haywood Newkirk, and Ligon Flynn and Henry Johnston established offices in Raleigh before turning to the coast to design homes that would blur the lines between outdoors and indoors for a well-heeled clientele on Figure Eight Island. Now, a second generation of architects — including Henry’s son, Ian Johnston, and a group of contemporaries like Michael Moorefield, Kevin Pfirman, David Lisle, and Michael Kersting — are either renovating those original homes or building their own legacies on the island. They are elevating the early modernists’ conceits and concepts for couples like the Spencers, who cherish history and natural beauty, and embrace bold and fearless design. 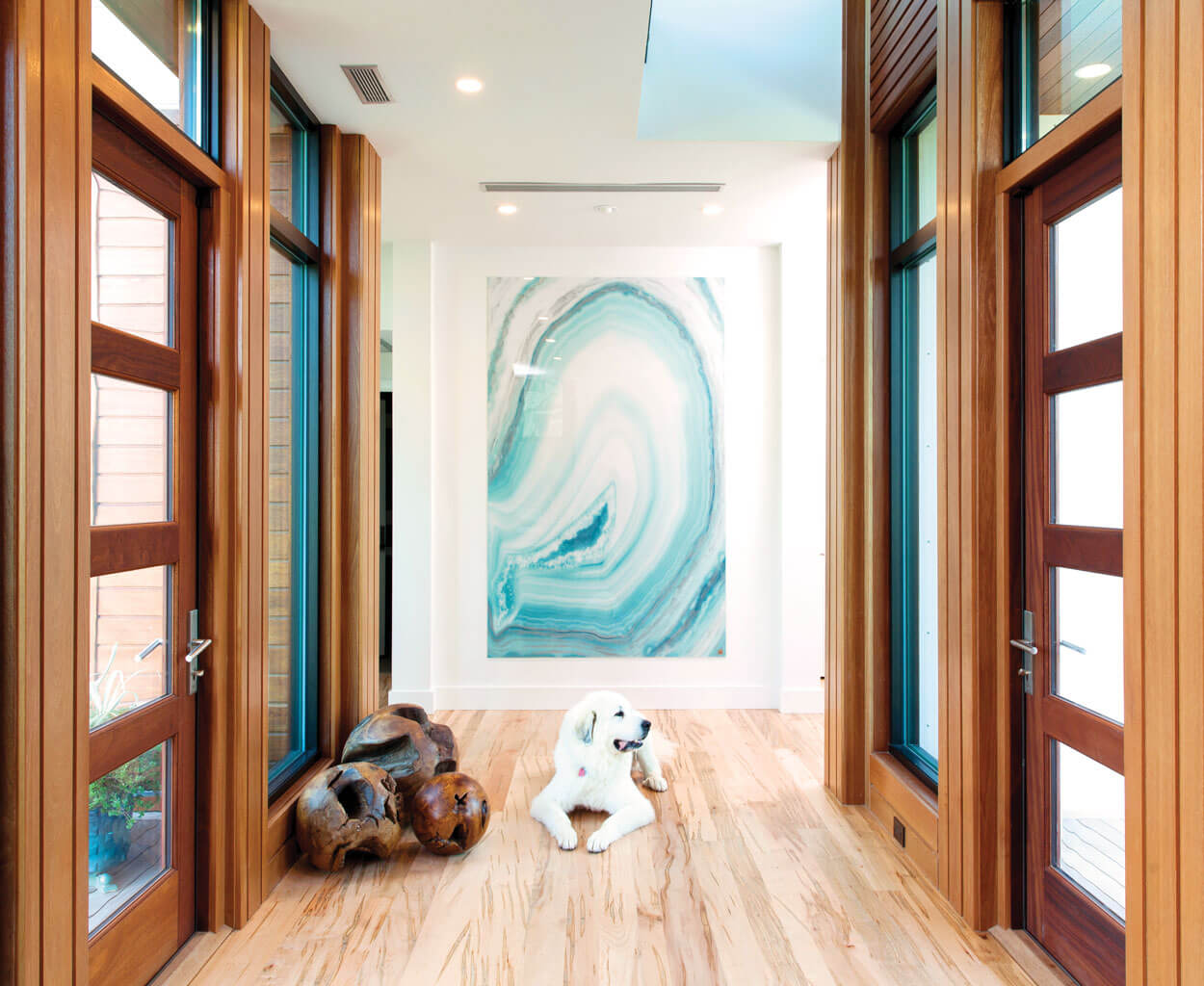 The couple’s dog Tray likes the spot by the blue agate painting. photograph by Andrew Sherman

With the Ship House as a distant inspiration, the chance arrival of a magazine that advertised a sketch of a proposed Cayman Islands project gave Will even more ideas. He shopped Figure Eight Island for a building site and found a 170-foot-wide lot (most are 70 to 100 feet) on Beach Road North that offered unobstructed views of the ocean. But the empty lot was not unblemished — it had been used as a catchall dumping ground for decades.

A neighbor was the first to tell Will that a shipwreck had been buried there, though a good 20 years had passed since anyone had seen it. With a survey map and a general idea of where the wreck might lie, Will and Christy poked around the bog. Much to their delight, they found hand-wrought iron spikes, and more digging revealed a 35-foot section of the keelson. By then, they had contracted with builder Mark Batson of Tongue & Groove for the house project. Mark called Nathan Henry, an assistant state archaeologist and conservator based at Fort Fisher. Henry’s report identifies the vessel as the John S. Lee, a lumber schooner based in Norfolk, Virginia. “It sailed out of the Cape Fear River April 11, 1877 bound for Venezuela, two days before a Great Storm lashed the Carolina coast,” according to dispatches. On April 17, 1877, the Wilmington Star reported that an “unknown schooner” broke in half and washed up on the beach at Rich’s Inlet.

There were no survivors.

This historical detail affirmed Will’s idea to build a ship-like house on the site. Both Batson and the architect, Michael Kersting, were completely on board with a modernist twist on a seafaring theme. The two had worked together on other home projects that incorporated maritime features, such as exterior mahogany shiplap and porthole windows. Will wanted the shipbuilding references in the new home to be more than purely decorative.

“How do we make it as much like a ship as possible and still function as a home?” he asked. The team combined natural materials — like mahogany paneling and wormy maple wood floors — with man-made details. The bedroom-level coffee bar is designed to resemble a boat’s hull. The top-floor powder room is fashioned in the likeness of a submarine’s interior, with a reclaimed teakwood vanity assembled from authentic USS North Carolina deck timbers.

Still, Christy says, “I did not want the inside to be the thing that people think of. There’s no separation between the inside and the outside.” Throughout the house, seaglass hues create a tranquil color palette. On the first-floor landing, a blue agate painting by mural artist Alex Turco brings the wow factor that Will wanted. An open-tread stairway leads to the biggest stunner of the entire home — the cabana, which Christy calls “Will’s Las Vegas room,” and the rooftop pool. 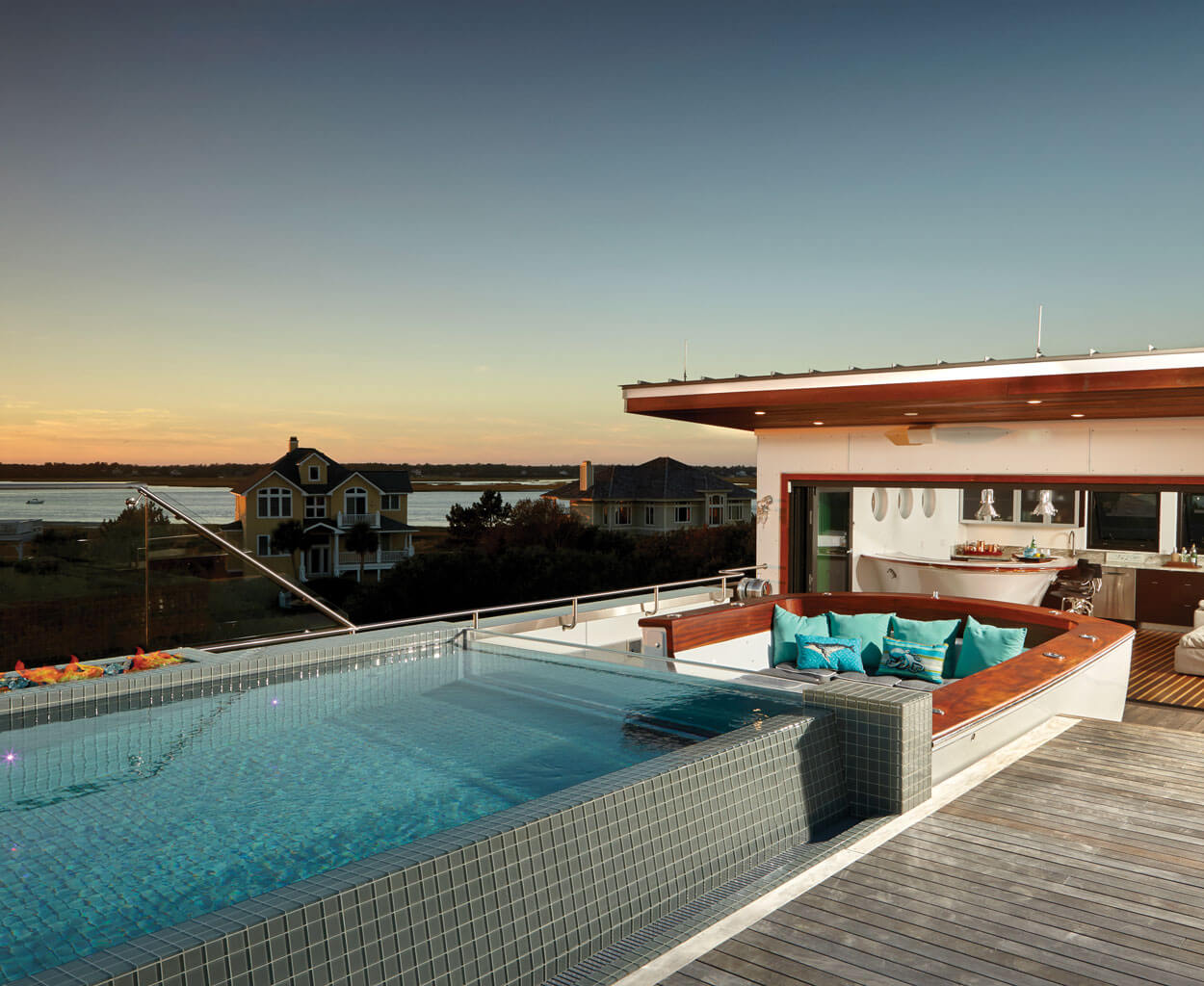 A ship atop a ship: The sitting area beside the rooftop pool was crafted from the hull of a Navy surplus boat. The galley-shaped kitchen is well equipped for serving dinner with a view in the open dining area. photograph by michael blevins/MB Productions of nc

A pool 40 feet above sea level, with a view of the water, is a seamless combination of natural and man-made design. Next to the pool is a seating area made from the hull of a Navy surplus boat that belonged to the builder’s brother, Caleb Batson. Caleb died in a spearfishing accident during the time when the house was under construction, and this feature is a tribute to his memory and the waters he loved.

Seafaring legacies abound on this ship of a house. Besides Caleb’s boat, the design incorporates the engine control panel from a Japanese warship, a binocular stand from a German warship, and a ship’s wheel in the cabana. “It’s a true collective mix of a contemporary house with a ship feel throughout,” Will says.

Christy, the one who loves the beach the most, enjoys walking her dogs, Tray the Great Pyrenees and Cal the Bernese mountain dog. Otherwise, she admits, “We don’t do much when we’re here. Coming down, sitting on the porch with a glass of wine. It’s not a very complicated equation.”