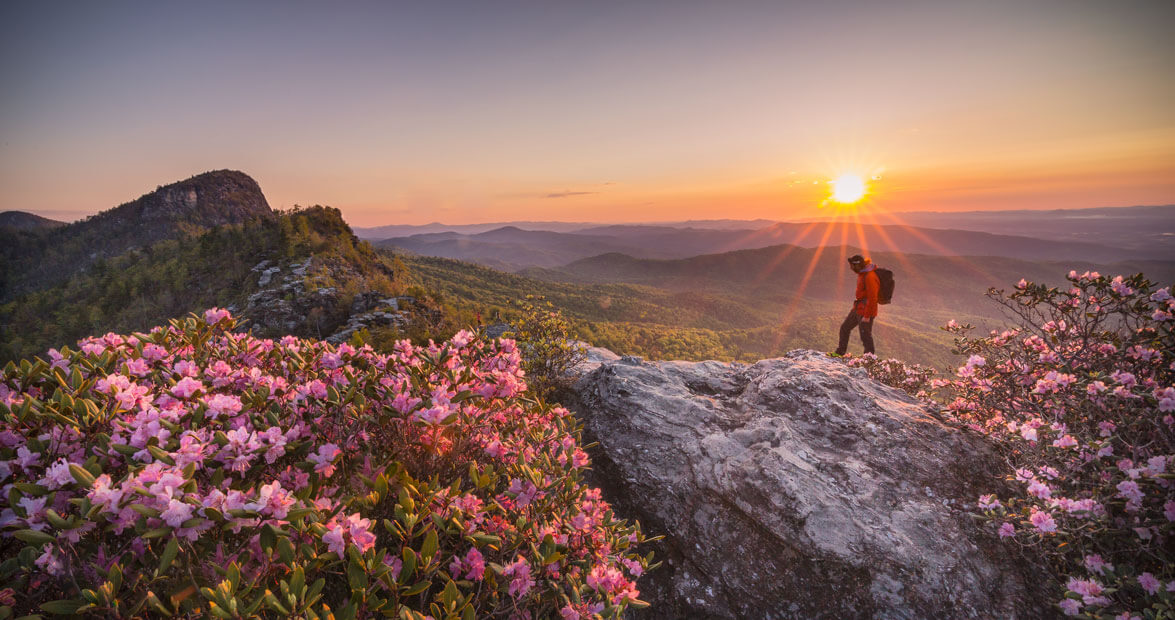 North Carolina’s longest trail runs across mountain peaks, past farmland, along rivers, through swamps, down country roads, and across beaches. Some of its most strenuous spots are in the west, including this stretch through the Linville Gorge. 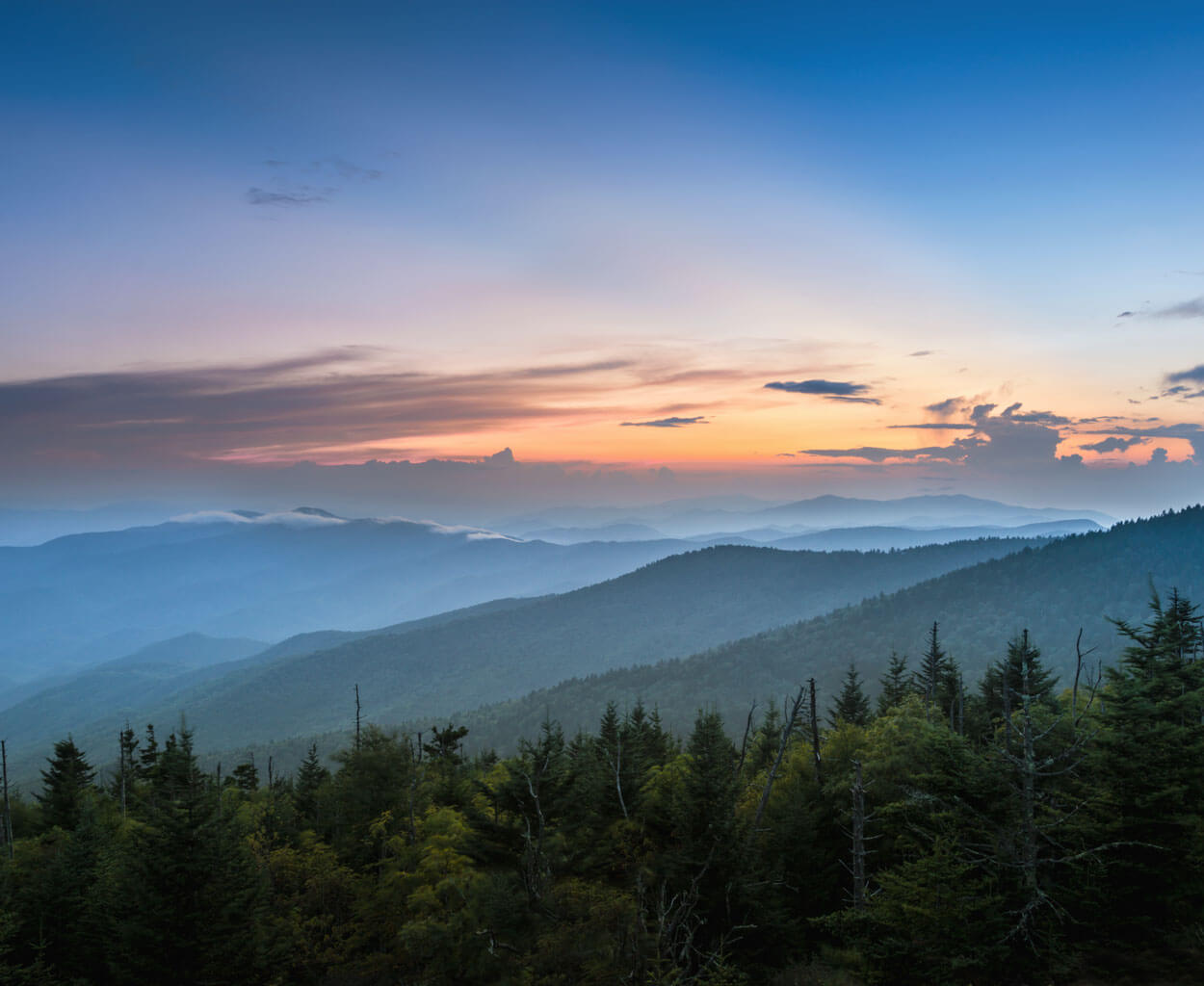 The MST follows the Blue Ridge Parkway, crosses the Qualla Boundary, and winds its way toward its highest point at Mount Mitchell, 6,684 feet above sea level. photograph by Tommy White

The Mountains-to-Sea Trail begins at the observation tower on this mountaintop along the North Carolina/Tennessee border. From there, it winds through Great Smoky Mountains National Park, at one point going nearly 23 miles between road crossings. 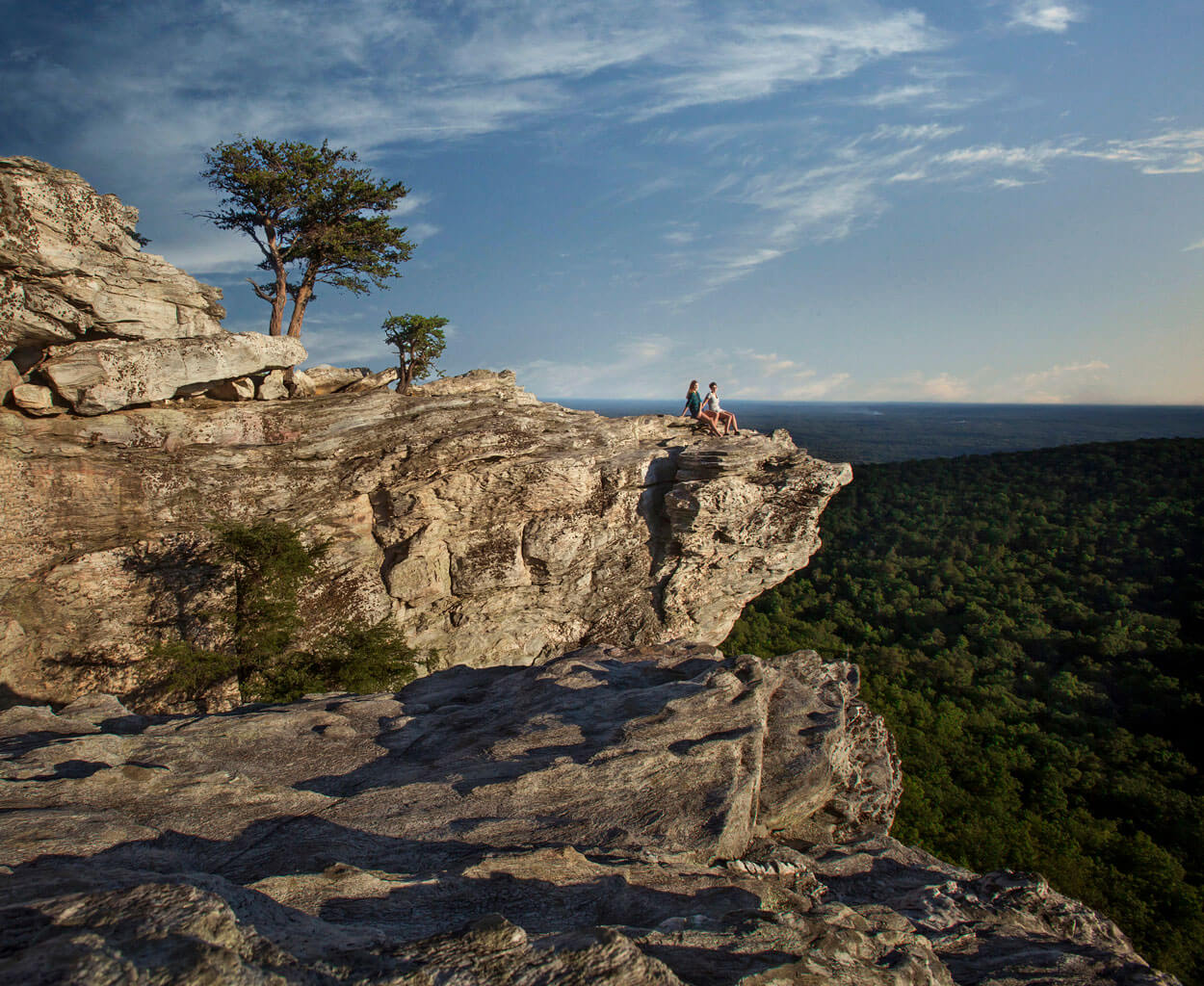 To get to Hanging Rock, the MST follows the Sauratown Trail, one of North Carolina’s oldest long-distance trails. It passes farmland and is surprisingly isolated from towns. photograph by VisitNC.com

Discover the best of both worlds: a view of the surrounding Piedmont from the rocky outcroppings of the ancient Sauratown Mountains. To get to Hanging Rock from the west, the path follows the Sauratown Trail. Heading east, the trail follows mostly roads until Greensboro. 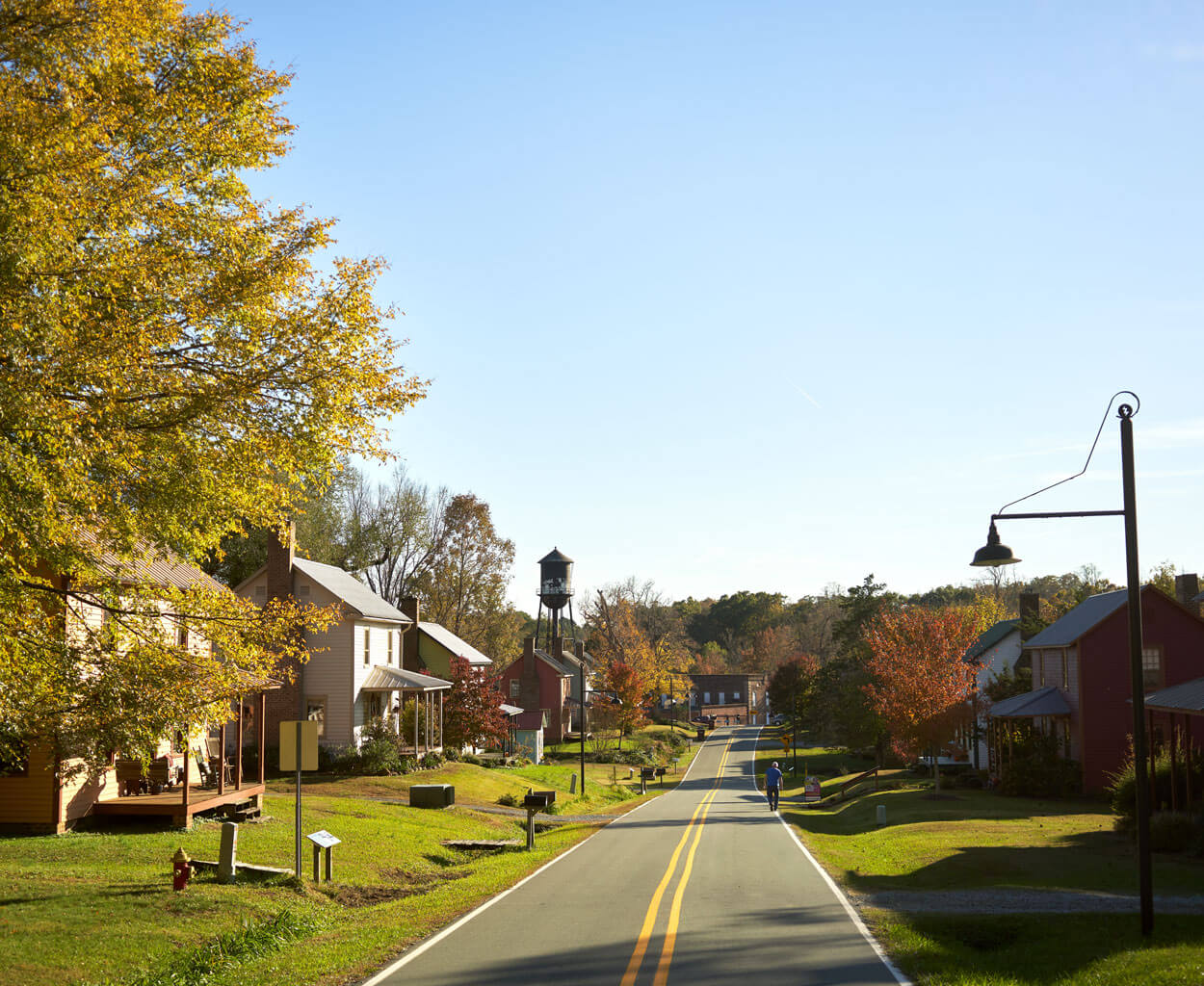 Passing through this historic town, you’ll feel transported to another time. photograph by Joey Seawell

In Alamance County, the MST follows a footpath along the Haw River, then runs through one of the best-preserved mill villages in North Carolina. After Glencoe Mill closed in 1954, the village was abandoned, but it has since been renovated to reflect its past life. 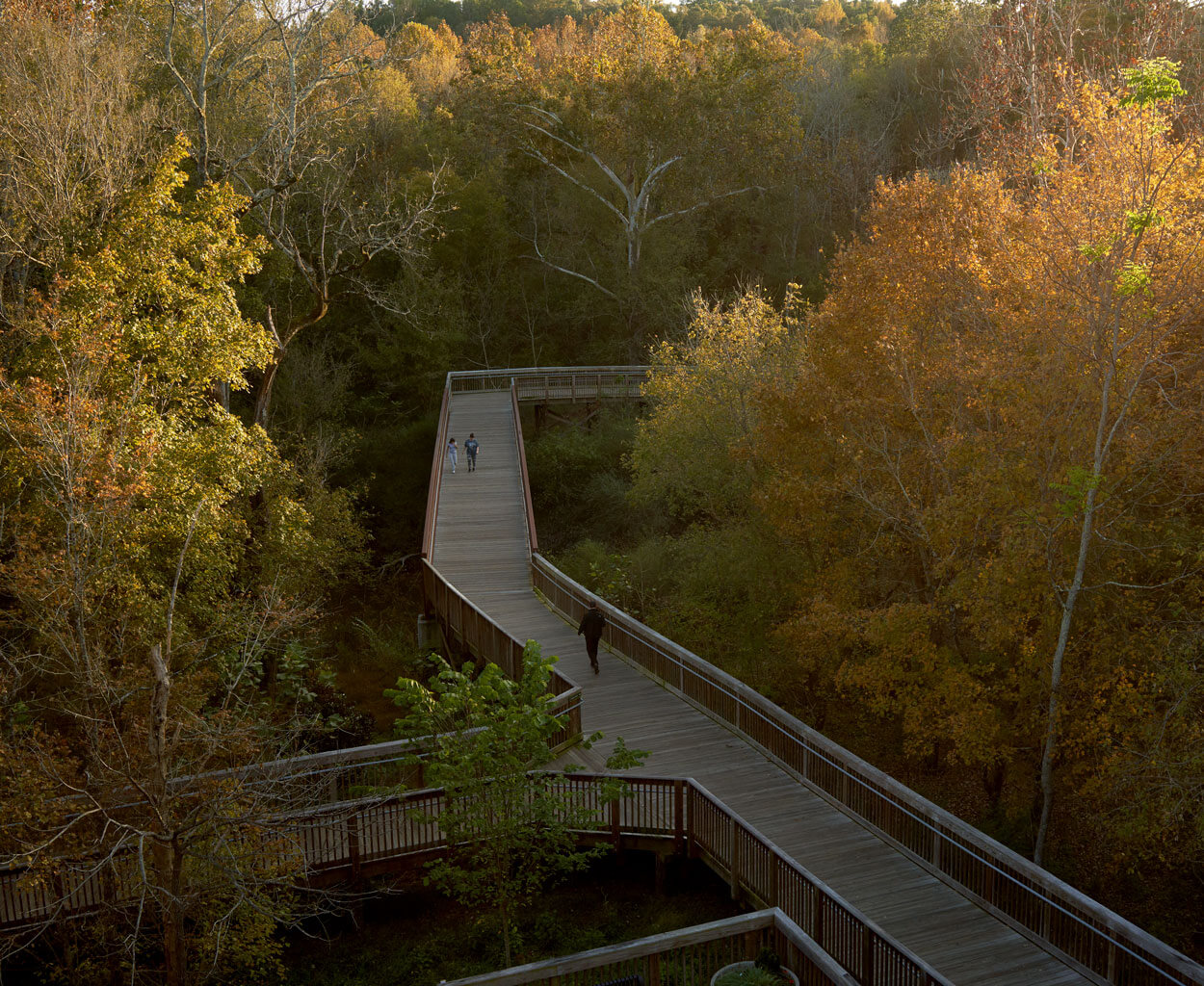 In Hillsborough, the MST follows along the Eno River. photograph by Joey Seawell

The path runs for three miles through town here, passing nest-like structures by artist Patrick Dougherty as well as the site of the former Occoneechee Speedway. 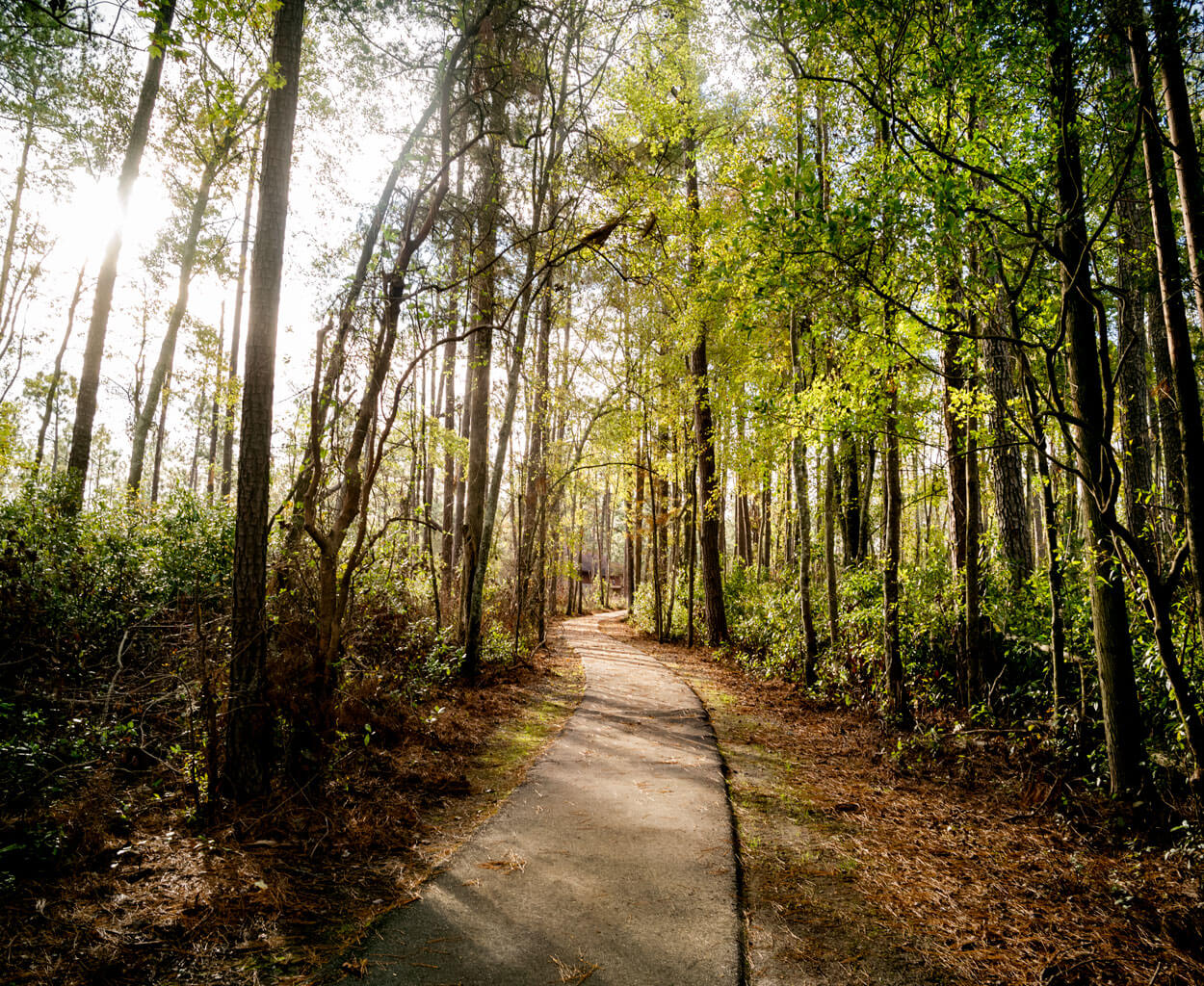 As the trail heads eastward toward the coast, it runs along the shore of Singletary Lake, one of many Carolina Bay lakes in eastern North Carolina. 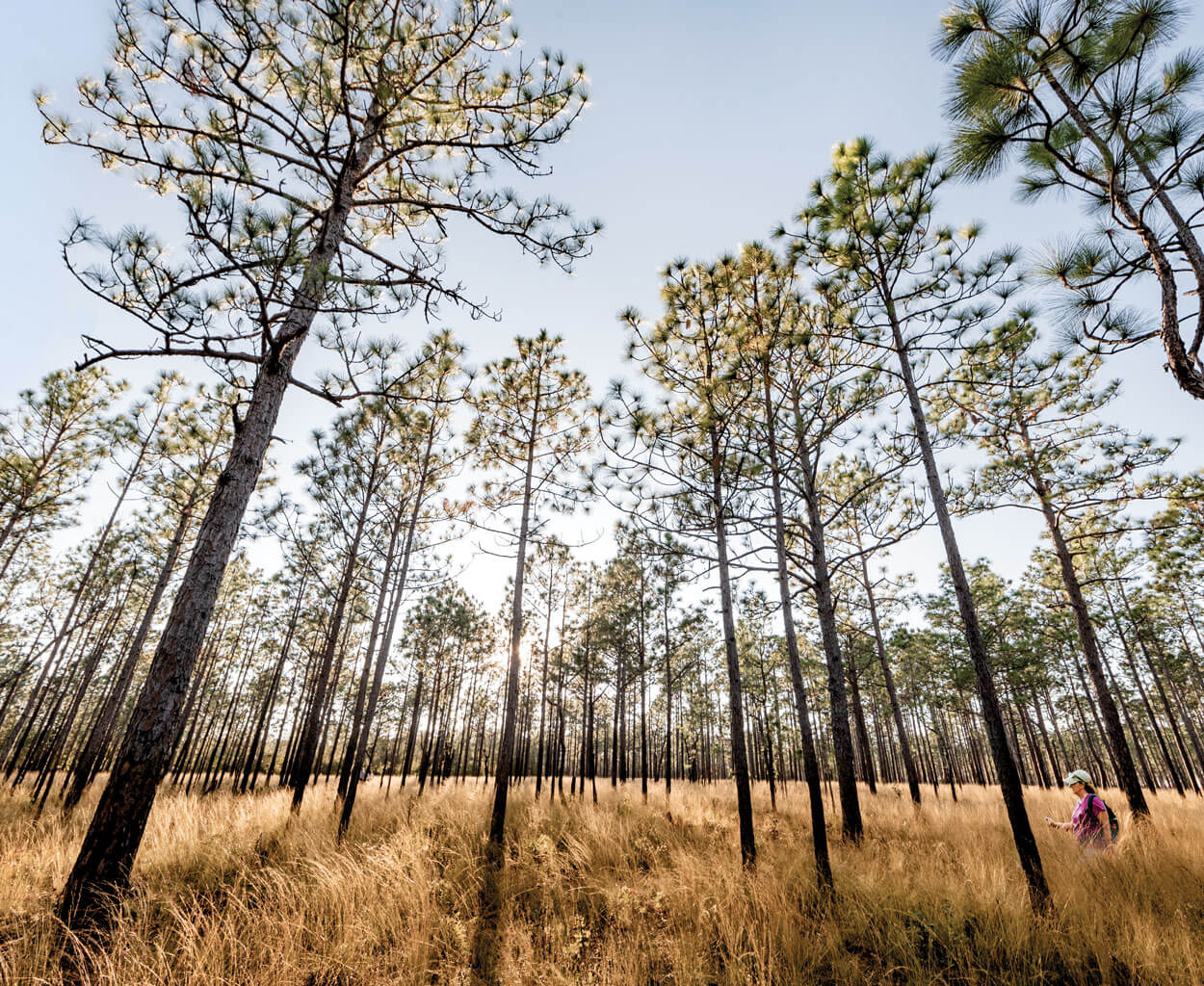 Some of the longleaf pines and pocosins are recovering from a major fire in 2011. photograph by Charles Harris

Here in Pender County, the MST follows 19 miles of forest road through stands of longleaf pine and pocosins. To the east, the trail meets the ocean for the first time, running for eight miles on the beach at Topsail Island before heading northward to Jacksonville. 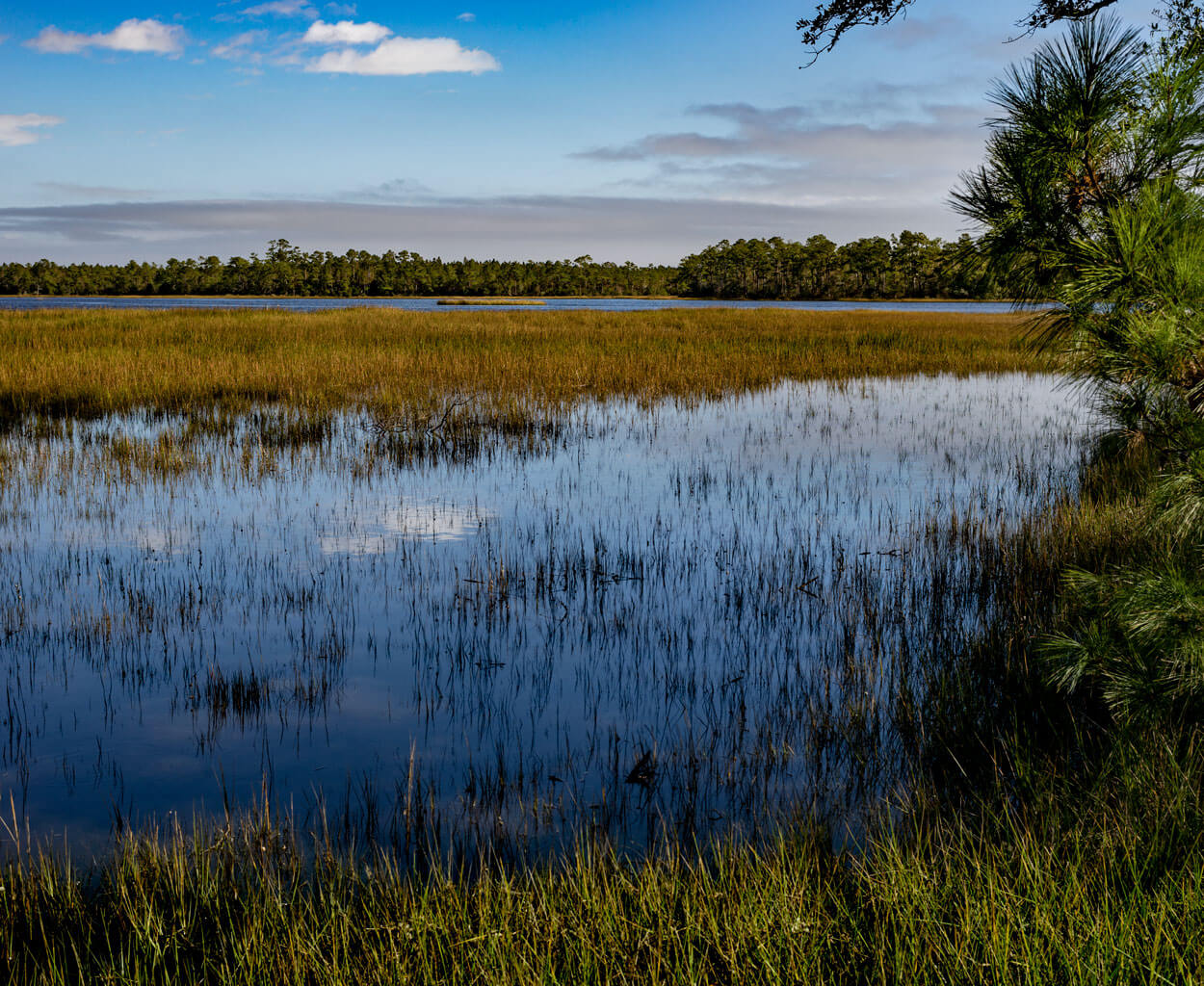 Along the Neusiok Trail, you’ll pass through swamps and grasslands. photograph by Charles Harris

From Havelock to Morehead City, the MST follows the 21-mile-long Neusiok Trail, the longest continuous trail in eastern North Carolina. The MST runs along roadways, where it makes two ferry crossings to get from Cedar Island to Ocracoke to Hatteras. 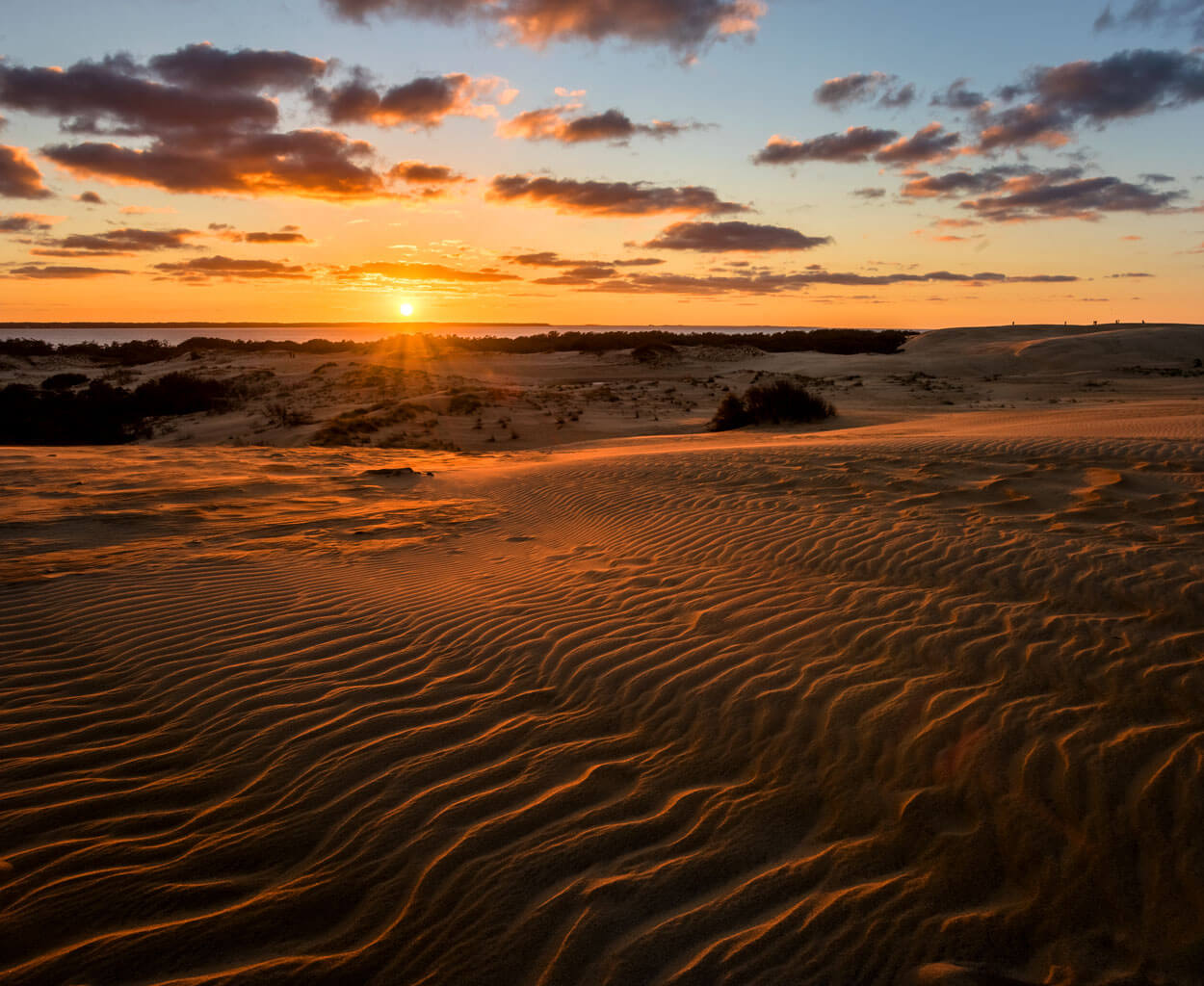 This spot is home to the biggest sand dunes on the East Coast. photograph by Tommy White

Once it reaches the Outer Banks, the MST runs along beaches and bridges for 81 miles before ending at this sandy spot in Nags Head. There is no official sign at the finish because the trail’s end isn’t fixed — its eastern terminus is atop whichever dune happens to be the tallest.

Read More: How The Mountains-To-Sea Trail Was Made

For the passionate advocates who work to move the path off of roadways and into woods and fields — a fraction of a mile at a time — improving the trail is an ongoing journey.