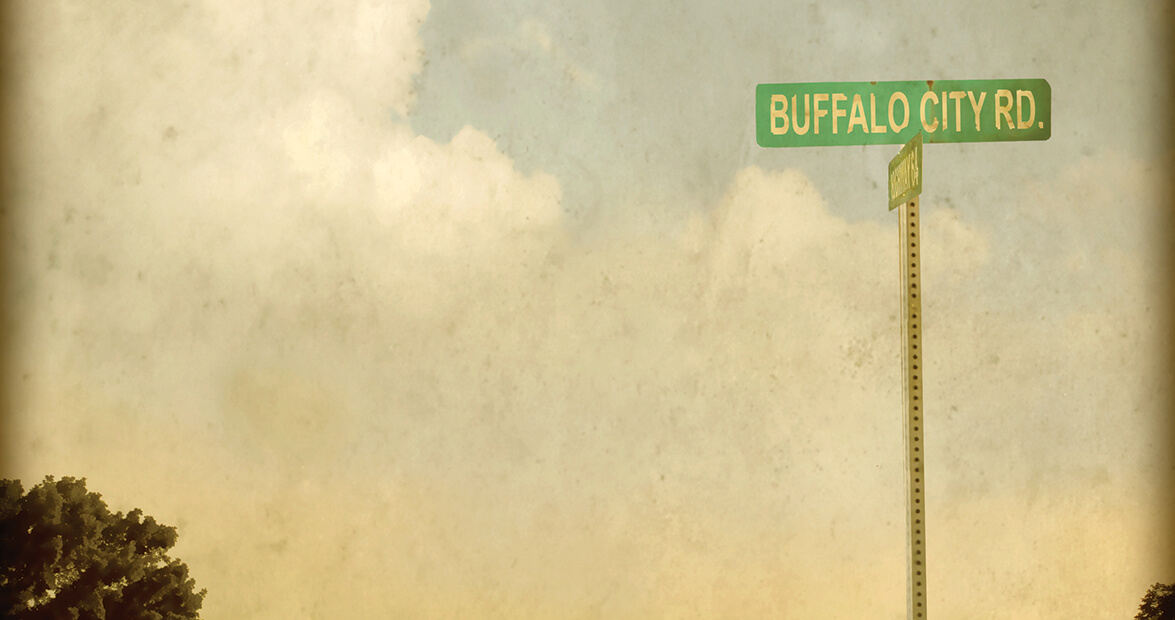 The signpost at the entrance to the gravel path reads “Buffalo City Rd.” But there’s no city here, not even the promise of one. The dusty strip named for it narrows and disappears into wilderness.

The road runs near the Alligator River National Wildlife Refuge in Dare County. I was passing by on U.S. Highway 64 on my way to a business meeting in Nags Head last year when my phone rang. The call was going to be involved, so I pulled over to talk, stumbling upon a gravel road.

The call dropped, but by then I was curious. Instead of heading back out to the highway, I eased down the isolated stretch into the swamp. After about two miles, I rolled to the road’s end, a paved turnaround closed in by thick brush. A launching point for canoeing within the refuge, a handful of trails branched off in different directions. On this gray day, it seemed a desolate place.

I picked up my phone, and with a quick search, I had it — some insight into Buffalo City, North Carolina.

A century ago, Buffalo City was a boomtown. Shortly after the Civil War, The Buffalo Timber Company, headquartered in New York, discovered North Carolina’s rich forestland and built the outpost on the north side of Milltail Creek. The company brought in hundreds of black and Russian laborers to build the town and lay the railroad tracks that carried out a seemingly endless supply of timber. They built sawmills, of course, but they also erected a hotel, church, general store, schoolhouse, and rows of simple company homes for the laborers. Buffalo City’s first post office opened on October 11, 1889.

Because the peat-rich ground was soft and muddy, residents laid down wooden poles and sawdust to form roadways. Many of the town’s buildings appeared flawed, built with imperfect timbers rejected by the mill. The three-room company homes stood together in rows above the mud — red houses for white families and white houses for blacks and immigrants.

Workers left their homes each morning to drive mule carts deep into the forest to harvest cypress, juniper, and pine for a daily salary of 50 cents. Their pay often came in the form of company-produced aluminum coins, the only currency accepted at the company store. The work for such pay would have been back-breaking. The days would have been particularly long amid the yellow flies and mosquitoes that own this land in the warmer months. Winter would have brought its own bitter burdens — chilling rains and icy winds.

After depleting the area’s trees, Buffalo Timber shut down in 1903, and the town almost died. Dare Lumber Company bought the property and resumed logging a few years later, and a new generation of workers and their families prospered. Buffalo City’s population grew to 3,000, making it the largest town in Dare County.

By the early 1920s, however, the region’s useful timber was nearly gone, and the lumber company moved on. But this time, a new industry arose. It was moonshine whiskey — handcrafted, widely acclaimed Carolina swamp juice — that brought Buffalo City back to life.

After the 18th Amendment outlawed spirits in 1920, almost every family in Buffalo City operated a still or was otherwise involved in bootleg liquor. Large shipments of sugar arrived regularly on the tugboat Hattie Creef, supplying dozens of stills scattered among nearby forests and on the banks of Milltail Creek.

They made their brew with rye, not corn. A typical recipe: 400 gallons of water, 100 pounds of rye, 300 pounds of sugar, and 5 pounds of yeast. The brew flowed out of eastern North Carolina up and down the east coast, supplying speakeasies from Norfolk, Virginia, to Boston, Massachusetts. By the mid-1920s, Buffalo City was known as the moonshine capital of the United States.

Federal revenuers also knew the region’s reputation, and their late-night raids shut down some stills. But production in the area continued for years, and the moonshiners often outsmarted the law. They hauled out their finished product in rows of casks tied on trotlines towed behind boats. If the feds pursued a boat, the crew cut the lines and the kegs sank — to be retrieved later.

The moonshine boom was brief, however, ending soon after the repeal of Prohibition in 1933. Demand for homemade whiskey waned, and Buffalo City once again fell on hard times.

Timber had one last gasp, but eventually the town’s population dwindled. The few remaining residents abandoned their homes when the last mill closed in the early 1950s. With no human hands to hold them in check, the swamp’s thick brush and pervasive vines soon claimed the city’s empty streets and buildings. Today, all that remains is a road to nowhere.

I tossed my phone on the seat beside me and peered out the window. Did any remnant of a mill or still lurk beneath the brush and trees? I knew it was unlikely; the refuge’s dense swamp forests have a way of erasing human traces. Buffalo City is no longer, just one example of a forgotten history that lies buried in the landscape around us. How often we take for granted the battlefields, the plantations, and the once-thriving communities that fade away over time.

The town remains an important part of our state’s history, however, another tale of hearty souls creating a space for themselves within untamed places. In the case of Buffalo City, the wilderness reclaimed this boggy land. But reading the town’s history and looking at old photos of log rafts, stalwart workers, and huffing train engines prepared to haul timber to the rest of the country, reminded me of the Tar Heel spirit that built this state. It’s the same spirit that knows when to let one chapter close while another is written.

It was time for me to get back on the road, and I spun the wheel around to head back to the highway. But then I picked up my phone and rolled to a stop. I set the GPS app to record this location: “Buffalo.” I’ll return one day, with canoe and snake boots — and maybe a hip flask.