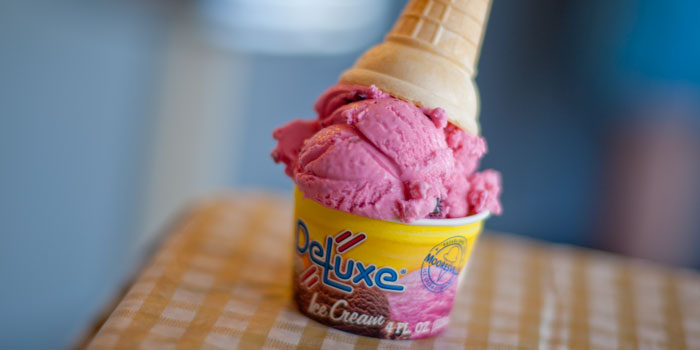 There’s something about sweet tea on a summer day. The way the glass sweats and water drips down onto your hand. The way the subtle tea flavor cuts through the sugary sweetness and makes it refreshing. The way it complements just about everything you crave during the summer — burgers straight off the grill, low-country boils, sticky barbecue ribs, corn on the cob. There’s just something about sweet tea that makes you feel Southern when you sip it, as if you were meant to sit on a deep front porch, swaying in a rocking chair with a glass. Now imagine that flavor, that feeling, of sweet tea tastefully rolled into ice cream.

Because, like sweet tea, there’s just something about ice cream. The way it drips off a cone and onto your hand. The way it feels when it hits your tongue on a summer day. The way you crave it when the sun beats down on you. It’s the combination of a Southern, summer flavor with a classic treat.

This past February, Mooresville Ice Cream Company launched Front Porch: a new line of Southern-inspired ice cream flavors, including one called Sweetie Tea. The company’s name fits. The front porch is the place to sit and enjoy an ice cream cone, but it’s more than that. The front porch is home.

The home-style flavors and foods of the South — your grandmother’s blackberry cobbler, your aunt Dee’s red velvet cake, the pralines from your local farmers market — help shape our idea of home, of the place we remember, the place we feel comfort.

Mooresville Ice Cream Company started in 1924, churning out its flagship DeLuxe brand and well-known novelties, such as the Nutty Cone and Mooresville Bar. Today, its products show up in most grocery stores in the Southeast.

The ice cream company began after the establishment of Mooresville Cooperative Creamery in 1914. Once the creamery installed pasteurizing equipment to make Grade A milk, it produced a surplus of cream. The company then used the leftover cream to develop its line of ice cream. Eighty-eight years later, generations of families have walked through downtown Mooresville, past the hardware store, and over the railroad tracks to get an ice cream cone from the town’s namesake creamery.

When Babi Alarcon bought Mooresville Ice Cream Company in 2010, she had the challenge of making the company stand out in a market saturated by big-name brands, such as Haagen Dazs, Breyers, and Ben & Jerry’s.

“We wanted an ice cream brand that would appeal to a greater Southern community and personality,” Alarcon says.

The way cheesesteaks are to Philadelphia, pizza is to New York, hot dogs are to Chicago — desserts, the ones our moms and aunts and grandmothers bake for us, communicate what the South means to us. Alarcon and her staff decided to pair this Southern dessert tradition with their regionally famous ice cream.

Brainstorming the flavors went on for weeks. Then the Mooresville team turned each idea into ice cream and tweaked every batch. Too much tea flavor here, not enough raspberry ribbon there. After months of adjustments, the company now offers 15 flavors.

Today, just two years after she bought the business, Alarcon walks through the Mooresville Ice Cream factory and watches the production of the new Front Porch flavors. The floor is wet, and the air smells of warm cream. She points out the various machines that grind loudly as they pasteurize the cream; whip the ice cream; and mix in the cake, wafers, and berries.

Today’s flavor is Lemony Sunshine. As the ice cream rolls off the conveyor, workers pack it into pint boxes to freeze and ship to grocery stores. Alarcon tells one of the workers she wants to taste today’s batch — to make sure the flavor is just right.

And it is. That first bite transports her to a warm, summer day.

Blake Miller is a Charlotte-based writer, whose work has appeared in Redbook, Self, Women’s Health, Shape, and other national publications.