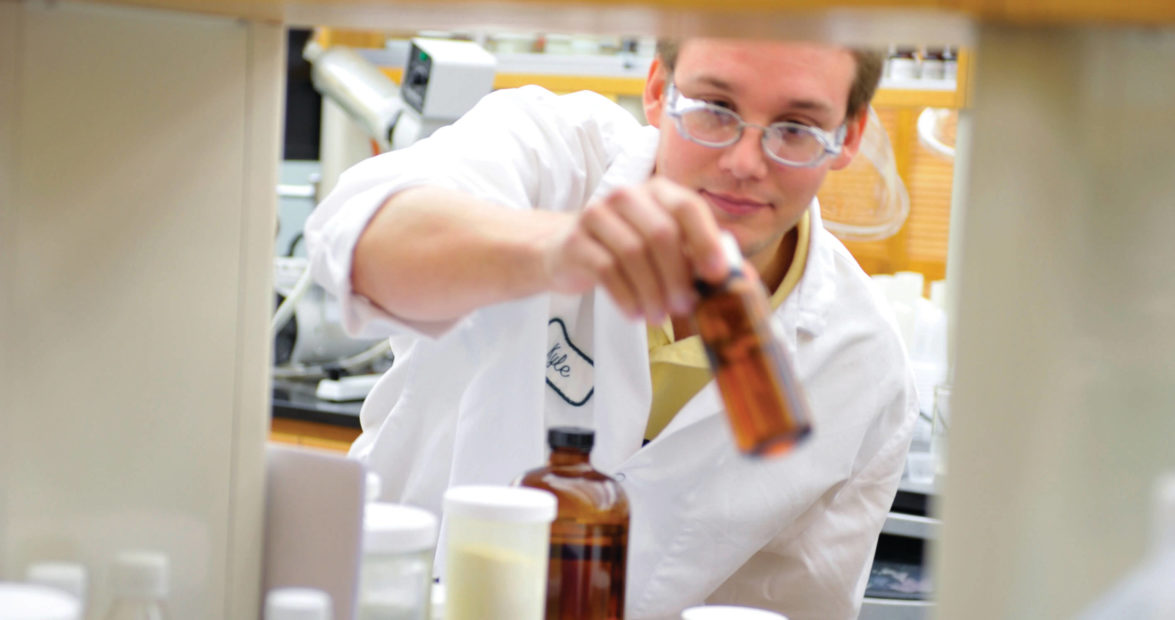 As an intoxicating scent wafts through the filtered air of the laboratory’s clean room, Patricia Stressler, wearing a white lab coat and protective glasses, adds a tiny drop of liquid to a beaker. She explains that she’s working on a project for a South American company.

“The basic flavor, the carrier,” she says, “is mocha. It’s just yummy.”

Mocha is a combination of chocolate and coffee, two flavors that together have something like 600 competing flavor components. As if that’s not enough, Stressler wants “to add a floral top note to kick it up a notch.”

If the floral note works, Mother Murphy’s Laboratories will add her concoction to the thousands of successful flavors it has produced throughout the past 60 years.

To look at it, Mother Murphy’s plant at the corner of S. Elm Eugene Street and Interstate 85 in Greensboro is just another collection of nondescript factory buildings. But within the red-brick walls of its main building is a state-of-the-art, 3,300-square-foot lab where science and creativity meet to produce a host of flavor sensations.

Here, flavor scientists in starched lab coats rely on sophisticated analytical devices — gas chromatographs and mass spectrometers — but the most valuable tools at their disposal are on their shoulders. A keen sense of smell, a set of tutored taste buds, and an excellent memory are job requirements. In fact, each chemist has served a seven-year apprenticeship in order to become one of only 500 chemists nationwide credentialed by the Society of Flavor Chemists.

Patricia Stressler is one of them.

During the 1940s, Greensboro physician Dr. Richard Stelling began formulating flavors in his basement laboratory. While examining local insurance agent Kermit L. Murphy Sr., Sterling happened to mention that he’d worked his way through the University of Georgia in the 1920s compounding and selling flavorings. Murphy, a born salesman, was soon peddling Stelling’s creations to local bakeries. By 1945, the two had rented space for a lab in the back room of a drugstore. By 1947, Murphy had convinced 14 investors to buy stock in Southern Laboratories, Inc., which by then was supplying artificial flavors for fruit-flavored drink mixes for the military.

In the 1950s, with the help of a veteran chemist recruited from New York, the company focused on vanilla, which it supplied to big commercial bakers. Vanilla, natural and synthetic, is still a signature product at Mother Murphy’s, with a dizzying inventory of 350 varieties to choose from. The company is known for its high-end vanillas, made from Indonesian or Madagascar beans that undergo a 21-day cold-extraction process.

By 1955, the name Southern Laboratories became the friendlier “Mother Murphy’s Laboratories,” an apocryphal but “sweet old lady.” By the early 1990s, Mother Murphy’s was supplying flavors to a host of industries — baking, beverage, cereal makers, confectioners, dairies, and snack food makers. Many of them are everyday flavors found in kitchen cupboards — coconut, cinnamon, sage, or wintergreen, for instance. Others spring more from science than nature: encapsulated fruit flavors that add an element of surprise to bubble gum or candy; flavors that tingle in the mouth or turn alternately hot and cold; a yeast note added to bread made without yeast; sweetness enhancers; and grass extract for deer attractants.

“Whether you start your day with cereal, oatmeal, pancake, waffles, doughnuts, or protein shakes, there’s a good chance we are a part of your breakfast,” says company president David Murphy, Kermit Murphy’s son. “We are represented on almost all of the grocery aisles and are in everything from cookies to pizza, from coffee to cigarettes, from cereal to doughnuts.”

With customers in more than 23 countries, Mother Murphy’s has 74 employees, grosses sales of more than $36 million, and is the largest flavor-maker in the Southeast.

Stressler ate soap as a kid.

“I would eat anything,” she says. “I would try everything. And I loved the smell of Ivory soap, so I bit it, and it stayed with me forever.”

Many years later, after getting her biotechnology degree in marine science, Stressler joined Mother Murphy’s in 1998. She has quickly become one of the top scientists in her field.

“Patricia can smell something and say, ‘Here’s a list of chemicals that are in it’ — just like that,” says Megan Whitson, 24, who graduated from North Carolina State University with a master’s degree in sensory science and flavor chemistry before starting her apprenticeship at Mother Murphy’s in February. “That’s the skill I’m here to learn,” she says.

Over the years, Stressler has developed dozens of flavors — including some for jelly beans. But the beans aren’t grape or cherry or even licorice these days. A few years ago, a candy maker approached Mother Murphy’s wanting to introduce a line of bizarre jelly beans, inspired by the Bertie Bott’s Every Flavor Beans in the Harry Potter books. And that meant nearly every flavor, including spaghetti, black pepper, sardine, dirt, and some involving bodily functions, the least revolting of which is ear wax. “Nobody else wanted [the project], and I just loved it,” Stressler says.

Stressler concentrated on three jelly bean flavors: baby wipes, pencil shavings, and, of course, Ivory Bar soap. She bought a box of pencils and chewed on them relentlessly, sifting out the various subtle tastes. She bought some baby wipes and analyzed them and combined vanilla with some floral notes until her solution smelled just right. Then she took the results to moms in the customer service department. “I’d go around and have them smell it and say, ‘Is this like baby wipes?’”

Most projects are not half as much fun. And every one of them is arduous.

All flavors are developed on speculation. A company will alert a Mother Murphy’s sales agent that it’s interested in, say, a toasted-grain flavor with a brown-sugar note. The flavor scientist then creates a flavor, often without knowing whether the end product will be the latest novelty candy, a vitamin drink, or a dead end.

For the South American company’s mocha project, Stressler plans to send three or four different samples. One of the flavors she’s planning to add to the mocha is patchouli, an oil that comes from a variety of southeast Asian mint. A thick, sticky fragrance, patchouli is associated with the era of hippie love children. Stressler’s also playing around with valerian, a medicinal herb almost as pungent.

“All you want is a nuance,” she says, sipping a little Dixie cup of patchouliated mocha. “Not quite right,” she concedes.

“Usually what will happen is the customer will love one, hate one, and give us some feedback on the other one.” Then, it’s back to the drawing board. If she’s lucky, she’ll finish the project in four to six months. “Some projects can take easily a year to develop,” she says.

It’s not at all unusual for the chemist to hear nothing about whether a company will use an invention. The “hit ratio,” or success rate, on product development in flavor chemistry is about 2.5 to 3 percent. Mother Murphy’s claims a success ratio double that, at about 6.5 to 7 percent. Still, that means scientists like Stressler are spinning their wheels roughly 90 percent of the time.

“You’re a Sisyphus,” says Stressler, referring to the mythological Corinthian king who was condemned to an eternity of rolling a boulder up a hill in Hades, only to have it roll back down every time he reached the top. “You’re constantly pushing, pushing, pushing, and you fall down and push, push, push. It takes someone who has tremendous perseverance to stay with something like this.”

The job can have its moments of pure delight. “Sometimes, you get a feeling. That’s the only way I can describe it,” Stressler says. “You’re making an apple flavor, and you know something is missing, and all of a sudden you get an idea, and you think mountain apples from the farmers market have a rosy note to them. They’ve got this rosy, unbelievable top note — honey rose.”

And that’s where science and creativity intersect. With literally thousands of flavors to choose from, Stressler says, “you know so many things and you can’t bring them all forward, but they kind of seep through.” Stressler keeps notebooks filled with impressions and combinations that she’s garnered through the years.

“Saffron smells like Band-Aids,” she once noted. One multisyllabic chemical reminded her of “neck of man.” Mustard oil enhances bananas in the same way that peaches go with cream. Intuitive clues seem to come more easily when she loses herself in a project: “You have to see it, feel it, think it, on a visceral level, and then use ideas as they come,” she says. “You become one with the flavor project.”

But that sort of intuitive second sense takes years to develop. Through the years, flavor chemists develop a palette of 1,000 or more favorite chemicals, compounds, essential oils, and extracts that they come to know and trust.

“Each flavor chemist has favorites and tends to use those,” she says. “It’s all about balance; everything in life that works and is beautiful is related to balance on some level.”

Stressler is clearly a scientist. But at some point in the creative process, “you start becoming an artist,” she says. “I paint pictures with chemicals and natural materials. I paint pictures, organoleptic pictures.”