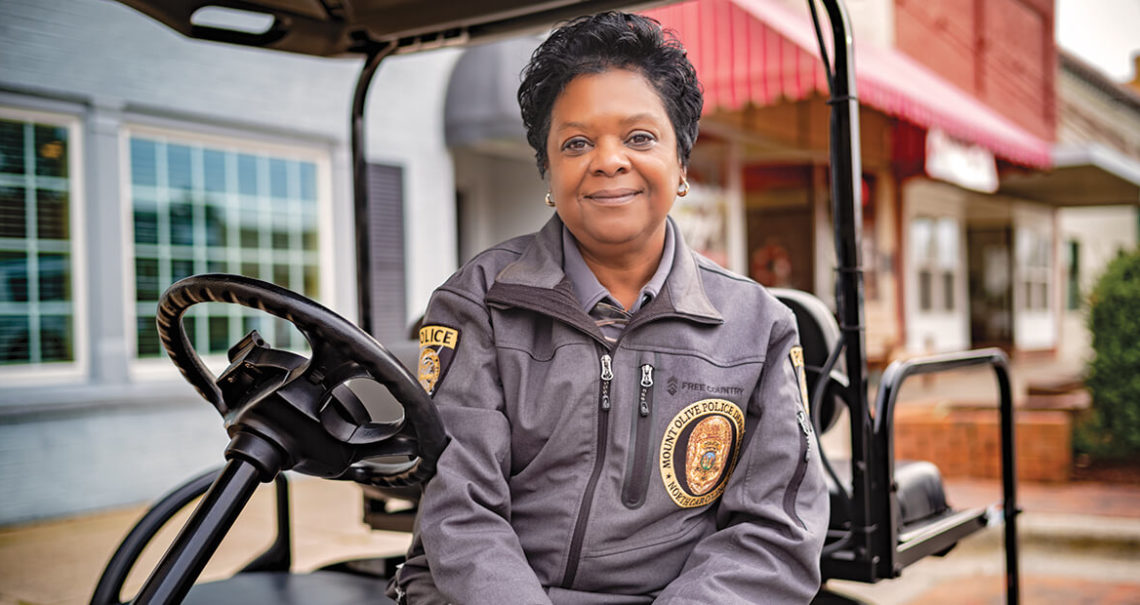 Linda Tyson lays on the horn of the police golf cart she uses to whiz around Mount Olive’s streets. A couple strolling by looks up and smiles. It’s impossible for this vehicle to sound anything but friendly, which is just what Tyson, the town’s assistant police chief, tries to project. Her Friday patrols in the summer are for handing out Popsicles more than citations. When kids hear her approach, they come running — she’s the ice cream lady, only better.

By getting to know the kids, Tyson gets to know their parents, and soon enough, she learns what’s really happening in the neighborhood: That’s been her goal since arriving in this tight-knit town five years ago, after 22 years with the Duplin County Sheriff’s Office. But Tyson’s work goes deeper than typical community policing. Many of these kids, these families, are relative newcomers, not just to this town in North Carolina’s inner Coastal Plain, best known for its eponymous pickle company, but also to this country. Beginning in late 2010, a wave of Haitian immigrants — now up to 2,500 strong — arrived seemingly overnight. Suddenly, there were Haitians walking to the Piggly Wiggly, carpooling to jobs at the Butterball plant, and sleeping cramped together in the little houses lining Center Street.

Some were fleeing the devastation of the magnitude-7 earthquake that reduced vast swaths of the country to rubble and dust, killing and dislocating hundreds of thousands. But others, benefiting from the temporary protected status that was afforded Haitians who were already in the U.S., came to Mount Olive from Florida and New York in search of jobs at the large processing plants, as well as a more peaceful life.

When they showed up in the pews of First Baptist Church on Chestnut Street in those early days, there wasn’t a soul who didn’t notice. “First Baptist Church is about as white as this sheet of paper,” says Charles Brown, town manager and church member, with a laugh. Congregants saw new faces and didn’t know what to think.

“In a town of 5,000 or so residents, when you have a few thousand new people, it’s quite a shift,” says First Baptist Church Pastor Dennis Atwood. “I felt like part of my role was to reach out and welcome them and provide hospitality.”

Atwood’s response may have been the Christian thing to do, but reaching out to this new community was a calling shared across Mount Olive officialdom. From the library to the transportation authority, town commissioners to school principals, those in positions to smooth the way for newcomers rolled up their sleeves. Tyson says the town is just putting its shared beliefs into practice. “The Mount Olive motto is ‘we value hometown tradition,’” she says as her golf cart skirts the pickle plant. There are more friendly honks, more waving. “That means everybody should know everybody.”

Without a Creole-speaking church of their own, the Haitian families who arrived at the beginning of the influx sought spiritual nourishment with Pastor Atwood’s congregation. He opened up First Baptist Church for joint services and brought in a Haitian pastor from Raleigh every Sunday. There were several potluck lunches after, with savory pastries and fried sweet potatoes sidled up to traditional Southern casseroles and cakes. A translator came to the church to hold listening sessions. New residents turned out to tell town leaders what they needed. Atwood asked questions and visited families in their rental homes, some of which, he recalls, were in grim condition.

Meanwhile, Brown met with Butterball’s CEO, requesting help connecting the community to city services and information. The turkey processing plant had experience in this work: Some 26 languages are spoken on the production floor. Brown also met with landlords, encouraging them to provide decent rental housing. Police officers responded dutifully to muggings and break-ins in the Haitian community. The work has paid off. A decade later, Haitians living in Mount Olive don’t just feel at home; they are at home. And as their children fill the halls of Carver Elementary and giggle in Steele Memorial Library in the afternoons, Haitian parents are busy adding purchasing power to their adopted town. “They’re just part of the community now,” Brown says. “I’m pretty proud of what we’ve done together and who we are.”

In recent years, Haitians here have opened several grocery stores, a repair shop, a car wash, and a small car dealership. Though one Haitian-owned restaurant opened and closed, another is rumored to be in the works.

Sylvie Pognon, who grew up near Port-au-Prince and immigrated to the U.S. 17 years ago, opened a thrift shop in September. She says that plenty of townspeople, not just Haitians, came in to congratulate her on the new beginning. The store helps support her two kids in college; a third child is serving in the U.S. Navy. “I feel like I’m part of Mount Olive,” she says. “My people feel comfortable. They can speak the language. Everything is close by so they can walk.”

A few streets away, Sehella Jean is listening to a booming sermon in Haitian Creole as she awaits customers at the Salva Caribbean Market. Torso-size bags of rice are stacked below shelves of tamarind, mango and coconut juice, and carved wooden mortars and pestles for grinding spices. The store fills a formerly unmet need: providing cooking staples from Haiti, a taste of home in a new place.

“The language is different, but when you stand up in church, it all sounds the same.”

Occene Louis worked in packaging at the Smithfield food plant when he first arrived in Mount Olive in 2011. He says that the Haitians he knows will never forget how the town supported the community. Nine years and five children later, he’s the founder and pastor of First Haitian Baptist Church. The small, faded white church is not much to look at from the outside. But space heaters warm the inside, where burgundy-colored material drapes the altar and silk flowers adorn the pews. On Sunday mornings, children arrive for Sunday school and congregants take up their prayers.

These days, Louis says, they’re praying that they get to stay in Mount Olive.

The temporary protected status offered to Haitians by the U.S. government was terminated by the Trump administration in 2019. But the order was blocked by lawsuits, and an extension was issued. While many of the 2,500 Mount Olive residents wait to hear if their new home will be permanent, they continue to live as though it is. They’re learning to drive and buying cars; going to report card pickup night at Mount Olive Middle School and to games over at the college. They’re packing pickles and poultry and practicing their English.

Despite the uncertainty, Louis and the church congregation bought three acres in support of their vision for the future: a beautiful new church big enough for hundreds of Mount Olive residents to worship together, take language classes, and engage in service projects that give back to the community. “It’s my prayer as a pastor for the community to be one and to grow together,” he says. “That’s my dream.”

It’s a hope that Brown can get behind. “The language is different, but when you stand up in church, it all sounds the same,” he says. “English, Creole — it’s all the same prayer.” Brown has his own dreams of expansion. And finally, with the addition of $5.5 million in the town budget for wastewater management, growth is in sight.

Still, there are complex challenges in this little town. Last year, a malnourished, homeless Haitian teen named Chamy came to Tyson for help. “He came to me on the day he was going to commit suicide,” she says. Tyson gave him food and hot water at the police station while she worked to build his trust. Then, she rallied town leaders to do something they’d proven to do well: weave a safety net.

Together, they got Chamy a spot at Tarheel Challenge Academy, a program that helps at-risk teens with school and job training, and sent him off with new clothes, shoes, and school supplies. Now, he’s in Job Corps, hoping to join the military, and driving around with his own driver’s license.

And on summer breaks, Chamy now has a home to return to: He stays with Tyson.

“When our kids are on the streets, we come together and do something,” she says. She keeps a photograph of Chamy on her desk, standing tall next to her in a blue cap and gown on his graduation day. Looking at it, she can’t help but smile with pride. “Everybody is a part of ‘us’ in the town of Mount Olive.”