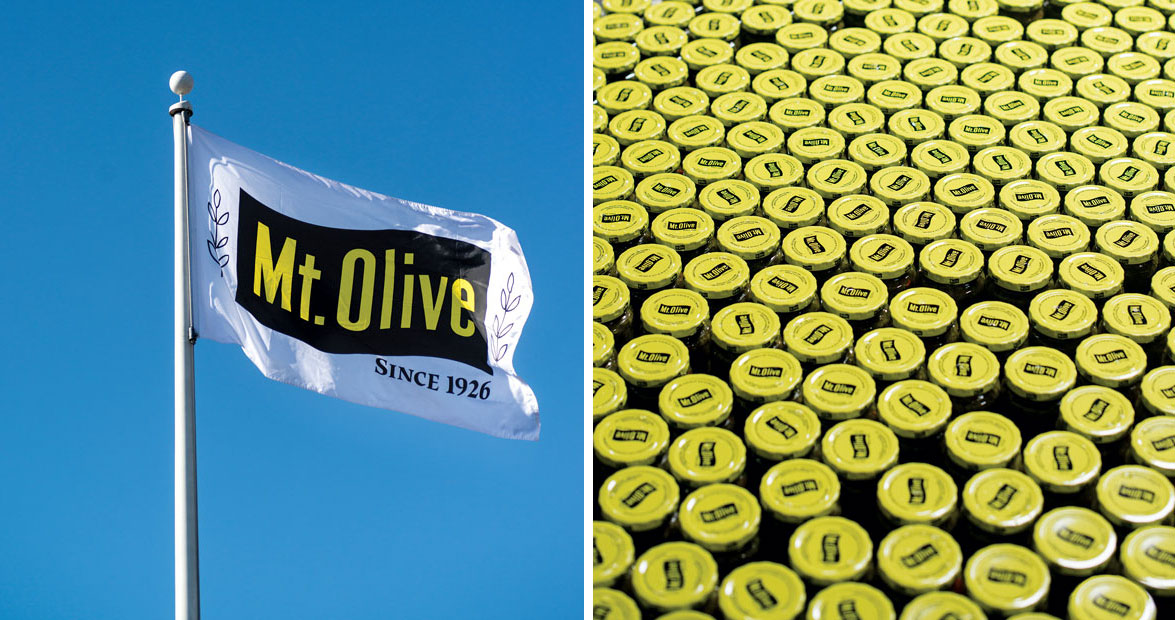 EDITOR’S NOTE: This story was originally published in the January 2013 issue of Our State.

My parents’ white, Victorian house stands directly across the street from the Mt. Olive Pickle Company. From the time a doctor delivered me and released me from the hospital until I left for college, that house was my home.

I’m part of what I assume is a very small group of people who can introduce themselves by saying, “I grew up across the street from a pickle factory.” Whoever else can say the same, I’m sure they, like me, know that this biographical oddity is not always advantageous.

When I arrived as an undergrad at Wake Forest University in Winston-Salem, I tried out that quirky line on potential new friends. I soon learned that my classmates found it more telling than interesting.

They didn’t get why I’d be proud of my town’s pickles. And I’ll admit, that was the first time I ever considered why someone might not be. But I realized that maybe it took a Mount Olive native to understand.

It all boils down to this: While Mount Olive is like a lot of other small towns in North Carolina — it stretches only about two and a half miles from north to south and it centers around a plant or factory — it’s the only one whose name appears on grocery store shelves in all 50 states.

And that name carries a lot. 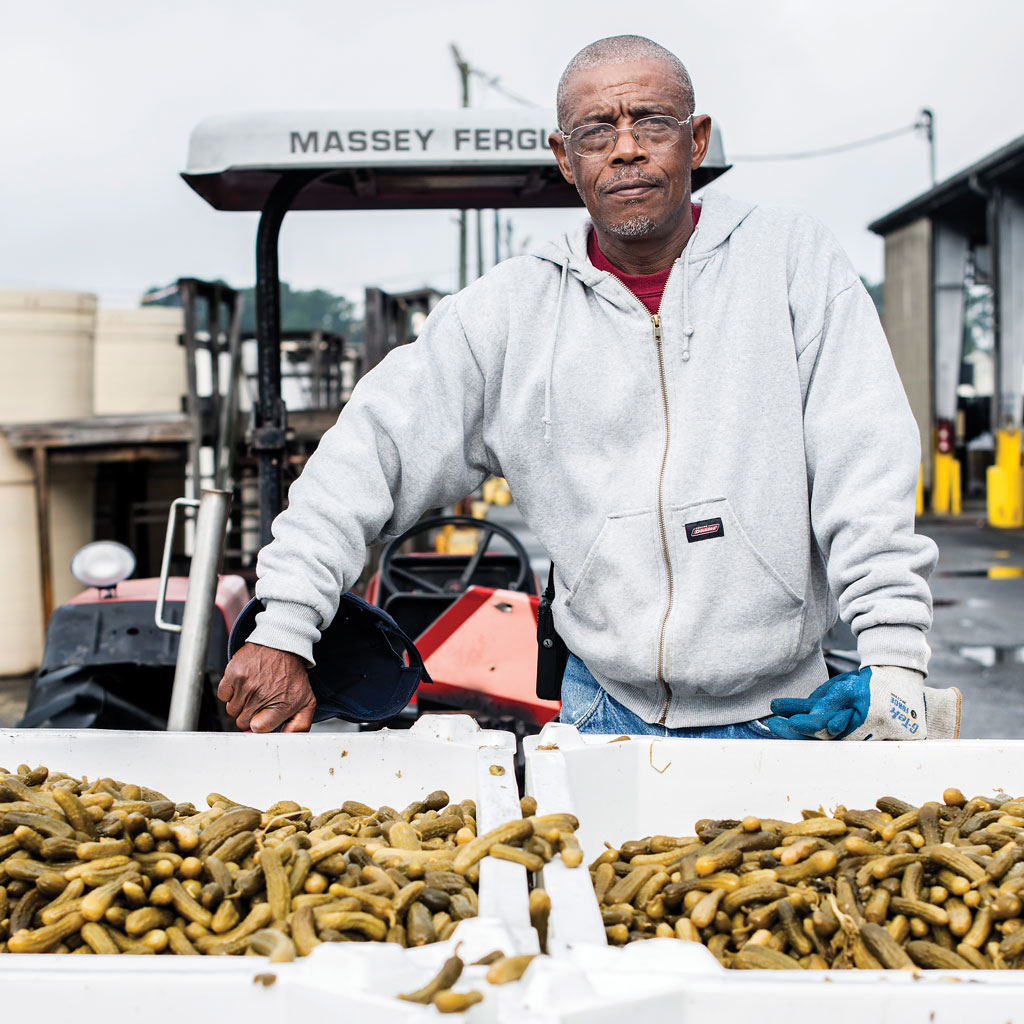 My dad packed pickles for a while. He’s a small-town lawyer now with an office on Center Street, but like many other Mount Olive natives, he first learned what hard work means on a pickle line. In high school, he worked at the plant during the summer — a period known as “green season,” when local farmers harvest cucumbers.

The prevailing contradiction in a town connected by its pickles is that its residents, including my dad, petition that Mount Olive has much more than pickles. They’re partially right. Mount Olive College, another namesake, is a respected place to earn a degree. Hwy 55 Burgers, Shakes, & Fries, a chain of ’50s-style burger joints named after the state highway that bisects the northern edge of town, has its headquarters here. And Southern Bank and Trust Company, once named The Bank of Mount Olive, finances many investments in town, both public and private.

But pickles are the most celebrated symbol of Mount Olive. Every New Year’s Eve, residents gather at the Corner of Cucumber & Vine for the annual Pickle Drop, where a three-foot pickle descends down a flagpole.

The logo of the Mt. Olive pickle brand — a black flag with “Mt. Olive” printed in yellow type, flanked by a pair of olive branches on each side — pops up everywhere around town: on license tags, on T-shirts, on baseball caps, and even on Christmas tree ornaments.

When the pickle company opened a gift shop in 1985, people started giving pickle-themed gifts as birthday and Christmas presents. At first the gifts were novelties, testaments to the unusual fact that a pickle company was an icon.

But then people started wearing the T-shirts and the baseball caps, and hanging the Christmas tree ornaments, and displaying the license tags.

To people here, the Mt. Olive name carries the pride of this place.

According to a publication the pickle company released on its 80th anniversary, the three labels were part of at least nine different brands the factory produced. In the 1950s, the company began consolidating the brands into a single name: Mt. Olive.

Ken Dilda, the museum’s unofficial everything — director, archivist, curator, and tour guide — can explain why.

He’s been around long enough to know the names of several important people, including former Mt. Olive Pickle president Johnny Walker. Walker insisted that pickles packed in Mount Olive should carry the town’s name and that consumers would buy such a brand.

Dilda retired from teaching history at Mount Olive College in May 2011 after 41 years. Since then he’s worked on several projects, but none more important than the history of the town.

He describes his work in a tone both solemn and cheerful. He accepts that the general public, anticipating what comes next, lacks the patience to study the past. But he holds out hope that one day they will.

Dilda is so dedicated to Mount Olive that you’d assume he was born here. He wasn’t.

He grew up the son of a tenant farmer in Pitt County in a house where the only books were the Bible and a few about cultural icons Roy Rogers and Pat Boone.

Yet, when an adolescent Dilda saw a newspaper advertisement for The Great Books of the Western World — a 54-volume history collection — he wanted it so badly that he clipped out the coupon, mailed in his order, and got a job driving a school bus to pay the bill.

“My father went ballistic,” Dilda says. “He asked me repeatedly, ‘What are you gonna do with history?’ ”

After graduating from East Carolina University with bachelor’s and master’s degrees in history, he heard similar gripes from the college students he taught. “What are we gonna do with history?” they asked.

He spent the next 41 years trying to answer that question.

Dilda argues that going through life without an understanding of the past, without a foundation for the future, is dangerous.

“Tradition and precedence are so important, I think, to build upon and hopefully improve upon,” he says.

Mt. Olive Pickle Company believes him. It’s one of the museum’s biggest donors. The bosses there understand that the Mount Olive name carries the pride of this place and that it’s a name worth preserving.

If you want to learn how Mt. Olive pickles are made, talk to the man whose office overlooks a whirring production line. Steve Whitman, inside production superintendent for the Mt. Olive Pickle Company at 1 Cucumber Boulevard, is a busy man. If he’s not in his office, he’s somewhere else inside this 275,000-square-foot plant. His job description goes something like this: Oversee every detail about every product made on nine different lines.

Whitman makes this job look easy. He started working at the pickle plant, as the locals call it, when he was 13. It was the summertime, green season, and Whitman obtained a permit that allowed him to work eight hours a day and no more than 40 hours a week for minimum wage.

“That was pretty cool,” Whitman says, “because back then people here worked six and seven days a week, 10-hour days.”

He went back to school in the fall but returned to work for Mt. Olive as a full-time supervisor trainee when he was 18. This past green season was his 29th with the company.

Whitman, more than anyone else, can show you how a pickle becomes a pickle. He showed me.

Amid the noise of forklift drivers sounding back-up alarms and pounding out fast, cautionary beep-beeps whenever pedestrians cross their paths, Whitman describes how to make a 21st-century pickle.

He starts with the stuff that’s as important now as it ever was: a hairnet and earplugs. Mt. Olive provides a set to every employee and every guest.

Pulling the hairnet over my head and pushing the earplugs into place, I begin to understand why my dad insists there’s more to Mount Olive than pickles: The work at the plant isn’t glamorous.

Whitman takes me outside to a spot called the tank yard, where the two of us, in polo shirts, stand out as observers. Here, we watch a man who drives what Whitman calls a pickle pump — think robotic elephant on wheels. He lowers a hose into one of the 1,300 fiberglass and plastic fermenting tanks and sucks up about 250,000 pickles. His face reveals a hardness built by a lifetime of manual labor. But a smile cracks across the man’s stern face when Whitman mentions that if you’ve ever bitten into a plump, whole Mt. Olive kosher dill pickle, this is where it came from. It’s a smile that says the work is hard, but worthwhile.

I see the same look on the faces inside, where Whitman shows me production Line 1. It’s the oldest operating line in the plant; the brick walls surrounding it date to the company’s founding in 1926. For 87 years, workers have hovered over a conveyor belt to make sure cucumbers — whether cut into chips or sliced into spears — neatly fit into jars, jostle down the line, and receive a 10-second shower of brine.

Two techniques — the fermenting tanks outside and the brine shower inside — are all Mt. Olive needs to make a cucumber a pickle.

It sounds simple, until you consider that workers on Line 1 may go through as many as seven product transitions in two eight-hour shifts each day. They understand that if the Mt. Olive brand is to carry the pride of this place, and be something worth preserving, then someone has to work hard to protect it.

After my tour, I step outside into the parking lot and notice my parents’ house a few hundred yards away. I’ve never seen it from the perspective of a Mt. Olive employee. Unlike them, I’ve never worked a green season, and only once before have I had a reason to see inside the plant.

I don’t live with my parents in that house anymore. I don’t even live in Mount Olive. I’m an expatriate now, living away from the place that will always be a part of me.

But in every jar of Mt. Olive pickles I see on grocery store shelves, wherever I am, I feel a sense of comfort, along with a touch of extraordinary pride.