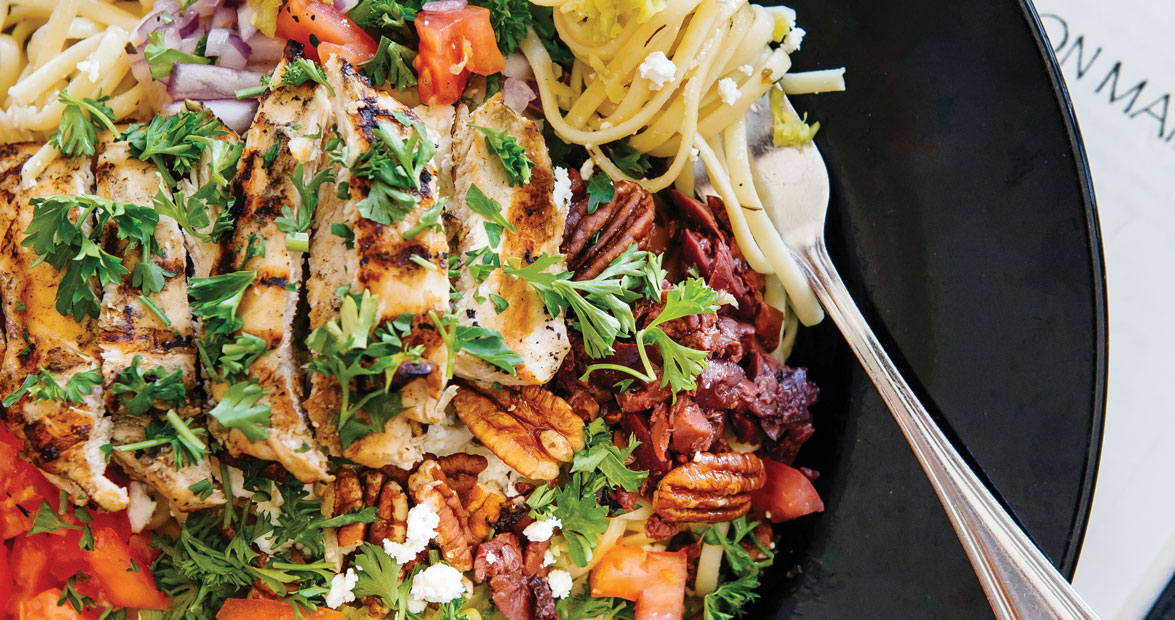 “This sounds kind of corny,” Mick McCardle says, leaning in a little. Jerry Garcia is singing in the background, just above the rattling dishes of the lunch rush. I lean in, too — toward the chocolate lava brownie in front of me. “But I look at Sylva as one of just a few places in the United States left like this.” Between bites, I look out the window onto Main Street, wondering just what this means.

I think I know. It means that this place looks like Hollywood’s idea of a Small Mountain Town: a quaint strip lined with local shops, a stately old courthouse (now the public library) towering above the town, the Smoky and Blue Ridge mountains surrounding everything. A place where people might say “how do?” on the street and give to their neighbors in need without blinking. 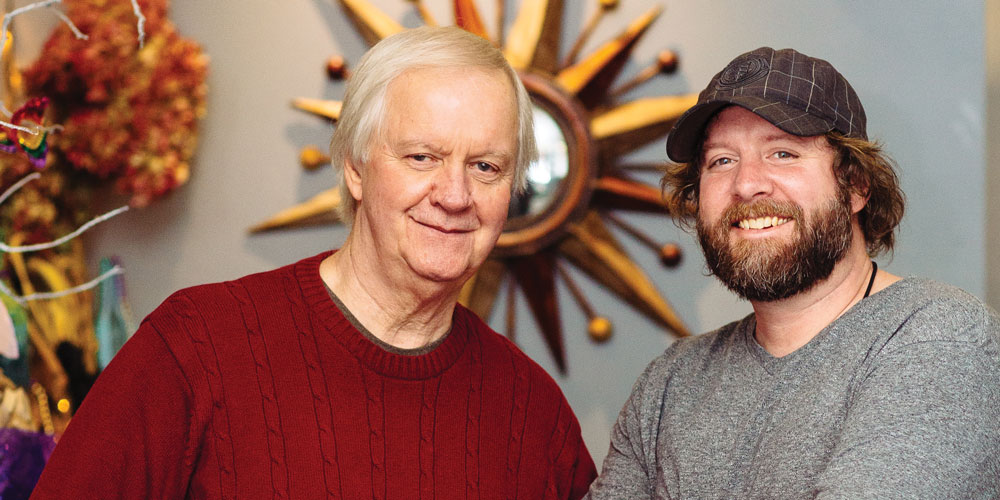 Mick McCardle (left) and his son Devin, the executive chef, have kept longtime Lulu’s favorites on the menu, like pasta salad ala greque. photograph by Tim Robison

“Instead of owning it,” Mick says, “we’re borrowing from tomorrow. There’s a sense of stewardship involved.”

Mick owns this restaurant we’re in, the one that has ruined all desserts for me for the rest of my life because of the generous sprinkling of toffee from Baxley’s Chocolates, and the whipped cream on top. He bought this place, Lulu’s on Main, in 2013, but the restaurant was already an institution in Sylva. It opened in 1989, and it’s a good bet that if you meet someone who has ever been to Sylva, they’ve eaten at Lulu’s: For nearly three decades, people have come to order the pasta salad ala greque — a Greek-inflected, warm linguine dish originally served by Louise Turner, the restaurant’s namesake and first owner.

For Mick, stewardship of Sylva has meant helping Lulu’s function more and more sustainably. It has meant using the toffee remnants from Baxley’s up the street on this dessert (have I mentioned the dessert?). And recycling used cooking oil at the Jackson County Energy Park, where it helps fire pottery kilns. And keeping the half-used loaves of bread at night to whip up cinnamon roll pudding in the morning.

It also means buying eggs and cheese from nearby Dark Cove Farm and vegetables from Cullowhee Creek Farm. It means fresh North Carolina fish and humanely raised, hormone-free beef. It means artwork painted upon repurposed wooden pallets, and original doors and windows from the building reworked as art and shelving throughout the restaurant. 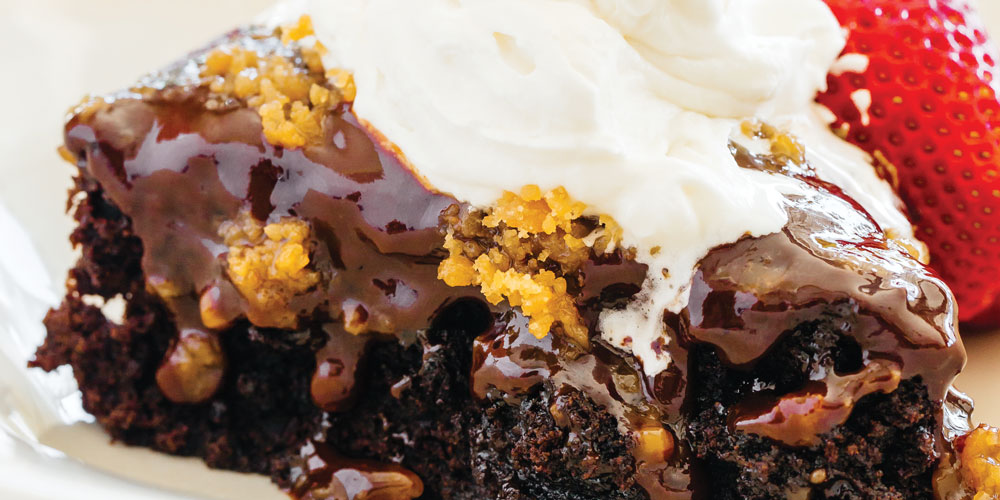 At Lulu’s, long a mainstay of Sylva’s Main Street, the chocolate lava brownie features toffee from nearby Baxley’s Chocolates. photograph by Tim Robison

But this all happens behind the scenes. Out in the open, it’s time to eat. And at Lulu’s, there’s a wide world of cuisine on a relatively small menu in this relatively small mountain town: New York strip, chicken tikka masala, cedar plank salmon, paella, Thai chicken over noodles, hominy salsa, Hi-Wire lager, mai tais, margaritas. You can order smothered pork chops and collard greens that once raised a man to his feet in the middle of the restaurant to exclaim, “Good God, Mama, I’m home.” Or you can order kimchi about which a Korean customer warned the staff, “Don’t ever tell my grandmother that yours is better.”

Behind this eclectic menu is Mick’s son and Lulu’s executive chef, Devin. After studying at the New England Culinary Institute in Vermont, Devin worked in kitchens around the country, picking up new flavors and techniques at each stop. More than a decade later, his dad decided to make a home in Sylva — he had passed through for years, and every time, he found himself staying a little longer. He bought Lulu’s, and Devin left his job as a head sous chef on the Outer Banks to come to the mountains.

While Devin brings worldly flavors to Lulu’s, Mick brings a career spent managing country clubs. Nothing about Lulu’s feels stuffy or overly manicured, but light touches from Mick’s experience show up here and there: “I want this to be a casual place with country club service,” Mick says. As if on cue, the waiter asks to refill my coffee and takes my picked-clean brownie plate. “And, of course, really good food.”