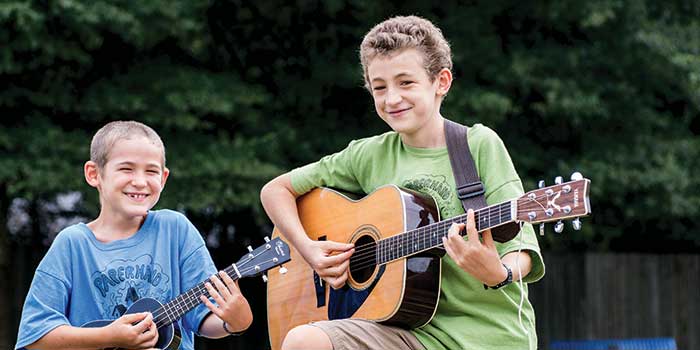 On a rare break from school, music lessons, and performances, a pair of musicians are seated on a couch in their Chapel Hill home, legs dangling because their feet barely touch the floor. Just 13 and 10, respectively, brothers Logan and Casey Valleroy write their own songs and perform alongside experienced musicians several times their age, often as a duo, the Bucket Brothers. They got the name from their first musical instincts: “We both started banging around on buckets and pots when we were young,” Logan says.

As many parents know, it’s not unusual for small children to empty the kitchen cabinets in order to explore early percussive skills, but most kids abandon that as they get older. For Logan and Casey, buckets were just the beginning. Their mom, Claire Viadro, recalls how, when Logan saw the wooden platform outside his preschool, he envisioned a stage like the one he knew from attending concerts at Weaver Street Market. At 8, he started playing violin and quickly became interested in a string of other instruments, many of which he taught himself to play.

“He has music deep down in his being,” says Logan’s violin teacher, Gabriel Pelli. “Something that can’t be taught.”

Casey’s always loved the drums, began piano lessons when he was 5, and can play, as Pelli puts it, “just about any instrument you put in front of him.”
Between them, the brothers’ repertoire includes violin, piano, percussion, guitar, cello, bass, mandolin, and ukulele. Logan, who recently won second place in the adult bluegrass division of the annual fiddlers’ convention at Shakori Hills, says he wants to spend some time focusing on the instruments he knows. But Casey is already thinking of pursuing the flute and, once he gets a little taller, the saxophone.

In 2011, Logan and Casey began playing together in public. Since then, with help from their mom, Claire, and dad, David Valleroy, who serves as their roadie and sound engineer, the Bucket Brothers have played fund-raisers, farmers markets, the Carrboro Music Festival, and the “Murphey School Radio Show,” a showcase of local writers and musicians.

For the Valleroy brothers, growing up in Chapel Hill means being surrounded by a music scene that’s both inviting and irresistible. They take lessons from Pelli and Robert Griffin, musicians active in local bands like The Old Ceremony and the Squirrel Nut Zippers. They attend the Emerson Waldorf School, which emphasizes the importance of music with specialized classes every year from first grade onward. And, starting when Logan and Casey were very young, Claire and David made special family outings to see and hear live music, especially bluegrass and jazz. They particularly loved stories woven by Saxapahaw’s Paperhand Puppet Intervention, shows that inspired the boys to make their own puppets at home for annual Christmas performances, where Casey was the actor and Logan provided the soundtrack.

To demonstrate, Casey parades through the room holding a giant, red-orange butterfly with wings that flap. He disappears again and returns, hidden behind one of their props, a giant, tri-fold library so big you can only see his feet.

Seeing all those shows, Claire says, “has been a big part of getting started — they’d watch drummers and go home and do exactly what they saw.”

When they perform, Logan and Casey don’t need sheet music. They can improvise together. They seem natural onstage, and they smile as they play. “They have a deep musical connection,” Pelli says, “that transcends the occasional bickering and hurt feelings, rare reminders that these two are just kids.”

“I just pretend like no one’s there. I like performing,” Logan says. He gestures to his brother: “And he likes the money.” They laugh. The boys played their first paid gig opening for a Paperhand show last year, but so far, all their earnings have gone toward paying for their instruments.

The Bucket Brothers have recorded a few CDs, two of which they sell at their shows. The first time they recorded their music, they didn’t have a drum kit, but the family was resourceful. They made a snare drum out of the lid of a cookie tin, adding Mardi Gras beads to create the necessary rattle. The cymbals were pot lids affixed to wooden stands built by David. The hi-hat was a steamer basket. Once they’d done all that, they still had to put the time in to record, which Casey, just 5 or 6 at the time, says he tired of quickly.

“Our first CD took three hours, and we thought that was a long time,” Logan says. “But now it takes days.”

Their CD, Leaves, includes the traditional “Shady Grove,” The Beatles’ “Yesterday,” and “Mickey,” Logan’s homage to the family dog and one of the Bucket Brothers’ most popular tunes. For his part, Mickey, a friendly, sandy-colored retriever mix, seems unfazed to hear his name sung through a microphone. He trots through the room and sidles up to Logan and Casey, eager for attention from the only two fans he cares about.