This is one cluttered kitchen, the kind long on utility and short on chic. No stainless steel fridge or faucet here. No gleaming granite countertops. It’s the kind of kitchen where things are perpetually put out instead of put up. Here on the counter, the one beside the sink, are at least three boxes of Domino Sugar, a glass bottle of buttermilk, a big whisk, a little whisk, a rubber spatula, an oven mitt, a bottle of vanilla extract, a carton of Harris Teeter milk, a flour-encrusted metal can, and two layers of red velvet cake, each cooling in a pan, waiting to be stacked and slathered with icing.

Nancie McDermott steps up to the counter wielding a big knife. She begins chopping pecans into little bitty pieces. This way and that way, she cuts. As she’s doing this, she talks, the conversation going this way and that way. She talks about childhood visits to her grandmother’s dairy farm outside Chapel Hill: “I thought it was wonderful to go to the henhouse to get eggs.” She talks about her time in the Peace Corps: “I wanted to see the world; I wanted to travel.” She talks about writing cookbooks: “I’m interested in recipes that have a story.” But mostly she talks about the cathartic power of cooking: “It’s a pleasure to me to spend all day in the kitchen to make a big mess. I love that!”

By now she has two or three flecks of flour in her hair. You don’t bother telling her. If anything, they complete the picture, enhance the charm, reinforce the fact that this is a working kitchen, not a made-for-a-glossy-magazine showpiece. The microwave buttons are stained brown from uncountable encounters with buttery fingers. The refrigerator is a bulletin board of random notes, magnets, pictures, and simple truths: “Good cooks never lack friends.”

What her kitchen lacks in grandeur, it more than makes up for in intimacy and warmth. Never mind that she’s working on her 11th cookbook; never mind that bookstores invite her to sign books for foodie fans; never mind that the photographed delicacies on her pages have a Martha Stewart-like perfection — Nancie McDermott is determined to demystify the home-baking experience. And here’s something that really gets to her: “People come up to me and say, ‘I love your book, but I gave it to my sister. I don’t bake.’ It’s like they’re thinking, ‘I’m not good enough,’ or ‘it’s too hard.’ ”
Why, just look at her own red velvet cake. The edges are a trifle crumbly, one layer is a little lopsided — but she couldn’t care less. It’s nothing a heap of icing won’t fix. “I can’t even make things look as nice as they make them look at Harris Teeter.” As she talks at length about cooking, she’s bound to invoke the spirit of Julia Child, the chef, author, and TV host who brought French cuisine down to earth for us meat-and-potatoes Americans. “You could tell she was just having a blast,” she says. And that’s what McDermott wants for all of us in the kitchen: to relax, let ourselves mess up, get flour in our hair, and have fun. “Why can’t it be OK to mess up?” she says. “I still burn my hand. I still cut myself once in a while because I’m not paying attention.”

The beauty of home baking is that even after a blunder, you can still have your cake and — yes! — eat it, too. “Until it falls on the floor, everything’s forgiven,” McDermott says. There’s another perk to baking in your own kitchen: family togetherness. If, as a parent, you’re craving a real chat with your teen, something beyond one-word answers — How was school? Fine. What happened? Nothing. Have a lot of homework? Yeah. — then break the ice by breaking out the icing. There’s something about a kitchen warmed by an oven and hazy with flour that encourages dialogue. “This conversation time, it doesn’t happen in a car,” McDermott says. “Eating together is the main thing. Creating a gathering is the main thing.”

McDermott has written two books, Southern Pies and Southern Cakes, that have yumminess oozing off every page like a caramel glaze. There’s egg custard pie (“simple, satisfying, and lovely to the eye”). There’s sweet potato pie (“perfectly wonderful in every way”). There’s sweet potato pound cake (“I adore this cake”). And then there’s apple pie, peach pie, pecan pie, peach-pecan pie, peaches and cream pie, scuppernong pie, persimmon pie, rhubarb pie, chess pie, key lime pie. There’s also pumpkin-raisin cake, banana cake, blackberry jam cake, molasses-stack cake, chocolate mayonnaise cake, Mississippi mud cake, and Louisiana syrup cake. None of the recipes are Nancie McDermott originals; they’re all recipes handed down from your grandparents’ grandparents and are surefire Southern. “You could not do a Midwestern cake book,” she says. “You could not do a Northeastern or California cake book. There’s just not that variety and depth.”

It’s the ruralness and fruitfulness of the Southern landscape that gave our region a sweet tooth the rest of the country envies. Add to that the confluence of African-American and European palates in the South, and you have the ingredients for a baking bonanza. “It was really in the South that baking and home baking took hold and has blossomed and increased and endured to this day,” McDermott says. Not all of the recipes in her books have clear-cut Southern origins, but they have been embraced here like a smothering hug from an apron-clad aunt.

Like all the delicacies birthed in this cluttered kitchen, Nancie McDermott herself is Southern. She was born in Burlington and grew up in High Point, but it was those weekend and holiday visits to her grandparents’ farm in Chapel Hill that stand out. “My grandmother loved to cook, and I remember watching her when I was little,” she says. “She was just a great Southern cook.”

The farm visits became less frequent as she became a busy teenager, but Chapel Hill beckoned her back after high school. She enrolled at the University of North Carolina at Chapel Hill to major in English — “because it had the least requirements.” She graduated a year early — “because I was in a hurry.” After graduation, she “hung around” Chapel Hill and worked in a bookstore. It was the mid-’70s: McDermott was young and poetic and filled with wanderlust, so she joined the Peace Corps. She spent three years teaching English as a Second Language and social studies in Thailand. While there, she was introduced to curry noodles, crispy fried noodles, stir-fried noodles, wild rice noodles in gravy, and a long string of other Thai dishes. She would eventually write her first cookbook, not on Southern fare, but on Thai food.

After her stint in Asia, she returned to the states, taught school in High Point, then moved to New York City in 1980 — “because my life was too quiet.” In 1999, Chapel Hill again beckoned her back. She couldn’t escape the pull of family, food, and folkways back home in Carolina.

For her, stirring the bowl as a 10-year-old girl in her grandmother’s kitchen stirred something in her psyche and destined her to make the kitchen a place to be celebrated, a place to make great things and have great conversations. She also wants these longtime recipes to endure for generations to come. Her mission: “I want things to be preserved.” 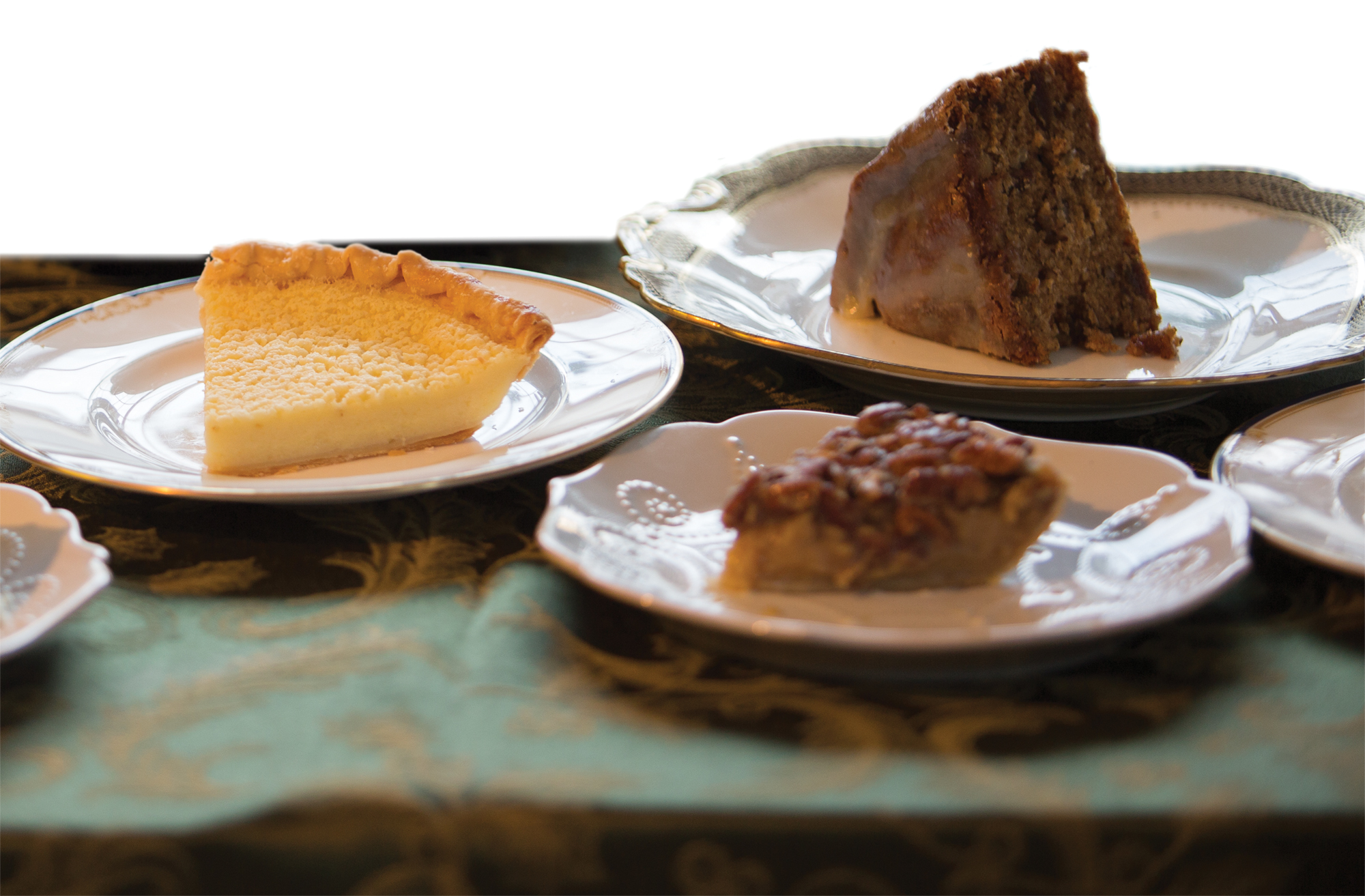 Nancie McDermott doesn’t consider herself a professional cook. She doesn’t sell her umpteen kinds of pies and beaucoup kinds of cakes; she makes them in her own kitchen for her own family and her own friends, and she encourages the rest of us to do the same: “I’m a home cooking missionary, I guess.” Professionally, she considers herself a writer. Throughout her books, she strews delicious morsels of prose. About the red velvet cake: “I adore its tangy little grace note of flavor.” But writing is a quiet and solitary endeavor; McDermott is gregarious and thrives on conversation. Writing is her job, cooking is her joy.

Here she is now, consulting her own cookbook for the making of coconut-pecan icing. Let’s see, it’s two sticks of butter, one cup of sugar, two tablespoons of flour. On a small plate, McDermott has those chopped-up pecans piled next to a mound of shredded coconut. She pours the milk and flour into a saucepan on the stove. “This is the easiest cooked icing you can make,” she says as she stirs the steaming and thickening white goo. After a few minutes, she scrapes the gooeyness out of the pot and into a bowl for cooling. Now she adds in the butter. Now she fires up the mixer. It whirs and whines. The goo becomes fluff. The urge to stick your finger in the bowl, to lick the beater, to lick the spatula, is almost too much. “Butter and sugar into smooth deliciousness,” she says.

In goes the coconut. In go the pecans. In goes the rubber spatula. Stir, stir, stir. Out comes the spatula. Tap, tap, tap on the rim of the bowl. “The most fun part is the icing,” she says, taking the spatula and scooping out a hunk of fluffiness to spread on those two velvet cushions. She handles the spatula like a trowel, masking the crumbly edges and making them creamy smooth.

There’s another cake, a classic pound cake, fresh out of the oven. She’s dressing that one up in a caramel glaze. So she goes back to the stove. Butter, brown sugar, evaporated milk, all in the saucepan. She puts the knob on medium heat. Get all the ooze bubbling. There they are: the bubbles, the steam, and the oh-so-sweet, oh-so-rich aroma. You peer into the pot. The steam hits your face. You breathe in, and breathe in again. McDermott: “What’s not to love?”

The ooze thickens, and she’s ready to massage it onto the golden-brown crust. It goes on lumpy — caramel glaze can harden fast — so she dips a clean spatula into hot water and strokes it over the icing to sculpt and prettify it. Soon she takes a knife and cuts each cake in half. For this you have come: the sampling.

You take a chunk of the red velvet.

Now, that’s good. That’s real good. To borrow a word from the woman who wrote the book on Southern baking, it’s sublime. This, right here, is the beauty of a messy kitchen — the something-you-can-sink-your-teeth-into result of a cluttered countertop and a greasy stovetop. If it inspires you to go home and make a mess of your own kitchen, Nancie McDermott will love you for it.