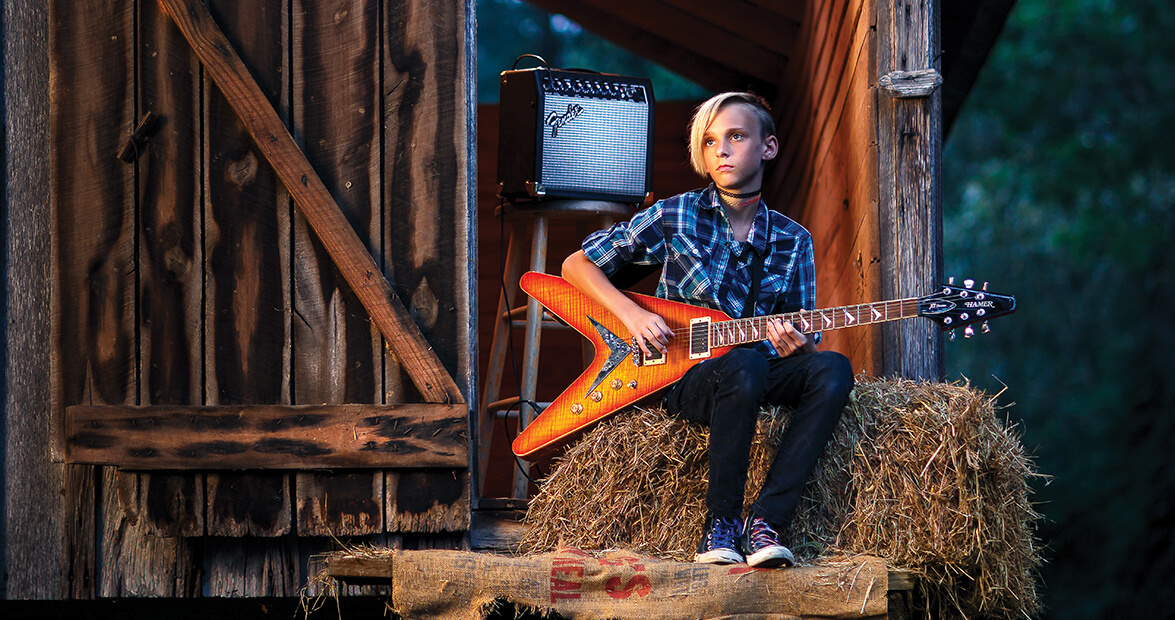 At Rack & Rolls, a pool hall and music club in Burlington, the roar of an electric guitar drowns out the clap of a break shot. In a nearby room, the opening act, Nathan Pope, churns out a series of fat chords on his golden Gibson guitar. He’s heard but barely seen. Less than five feet tall, Nathan is partially eclipsed by the height of the microphone and the clutter of instruments and props for the headliner, Old Man Noize. Nathan, who’s 13, is playing the blues behind a walker and next to a fake gravestone.

The trio — Nathan on guitar, Chuck Sirko on bass, and Bruce Wassel on drums — chugs through five songs. Soulful, resonant, the numbers were written by Nathan, a blues prodigy from Liberty. He picked up his first guitar at age 2, and started playing songs by ear when he was in first grade.

His parents, Lindy and Doug, sit in the second row of tables. They’ve heard these songs hundreds of times. Nathan practicing in his music room. Nathan playing in the front yard. Nathan busking on the street, his open guitar case lined with dollar bills. Nathan performing in clubs and pubs, at a blues camp in Mississippi.

“This song is called ‘You’re My Sunshine,’ and Nathan wrote it for a special young lady,” says Chuck, the band’s de facto emcee.

“Baby, you make me so happy,” Nathan sings, his high-pitched voice still unbroken. “On the rainy days you’re my sunshine.”

On nights like this, anyone who sees Nathan perform understands that his fledgling career is filled with expectation. Yet focusing on the future also risks missing out on the pleasures of the present. Someday Lindy and Doug will reflect on this time — when Nathan was a boy, precocious, of course, but still a boy — and marvel at how quickly it passed.

“Imagine what he’ll be like in 10 years,” a woman in the audience says to her friend.

Max Dearing, the drummer for Old Man Noize, chimes in: “Imagine what he’ll be like when he’s bigger than his guitar.” 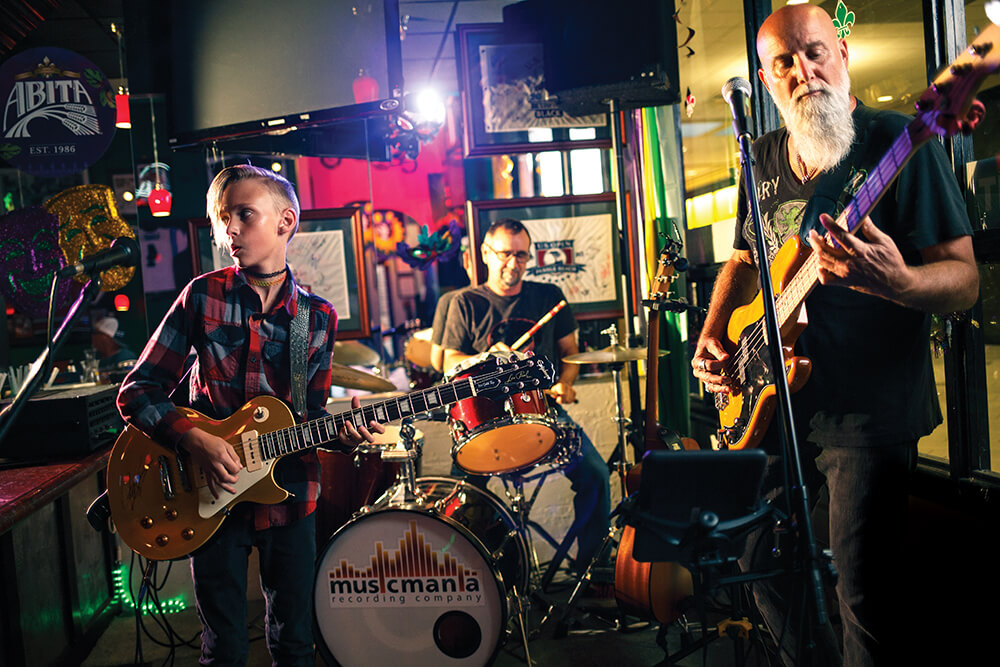 Sometimes Nathan will haul one of his dishwasher-size amps onto his family’s front porch in rural Liberty, strap on one of his dozen electric guitars, attach a wireless transmitter, and fill the countryside with the blues. “It’s real music,” Nathan says.

Inside the Popes’ tidy ranch home, there are guitars in Nathan’s closets, and guitars in stands on the floor. Hanging on his bedroom wall are guitars named for two of the family’s dogs: Nicholas, a golden retriever, and Saber, a black Lab. In a music room, there are drums, a piano, microphones. And, of course, more guitars.

Nathan brandishes a small red plastic model called First Act Discovery. Emblazoned with yellow flames, it was his first instrument, a gift from his grandmother when he was just 2. “I took it with me on vacation, in restaurants, everywhere,” he says.

Before he could talk, Nathan seemed enchanted by music, listening to Kenny Wayne Shepherd in his mother’s lap as she mowed the lawn. In the back seat of the family car, Nathan heard classic songs by Ray Charles and Stevie Wonder. “He hated the car,” says Doug, a truck driver. “But Lindy would put on Aretha Franklin, and boom — he would be quiet.”

By age 6, Nathan could pick out the melodies of songs he heard on the radio. “He did most of his practicing in the back seat, because we live 30 minutes from anywhere,” Lindy says.

At age 10, Nathan began performing onstage. When he sat on a stool to play, his feet dangled well above the floor.

Now, at age 13, he’s traveled to Memphis, representing the Triangle Blues Society. He’s performed in front of Morgan Freeman, who owns a blues club in Mississippi. And he’s recording his first CD, a five-song collection of Christian blues. “I want there to be songs,” Nathan says of his recordings, “not some 13-year-old playing riffs.”

Nathan breaks into a nimble, speedy solo. The chatter stops. The people at the bar rest their forks.

In the living room, Nathan breaks into song on an acoustic guitar; his left foot keeps time. He can’t read music. But Chuck has taught him the hand placements on the fretboard and the notes on the strings, which Nathan has committed to muscle memory. Chuck is also Nathan’s mentor, guiding him through the emotional and psychological hurdles of being a musician, especially one who has yet to finish middle school.

“He’s taught me how to keep my mind on the right path, to keep myself humble,” Nathan says.

Blues music, however, isn’t only about playing the right notes. It’s also channeling the sorrow and weariness that only years of hardship on this earth can inform. So what makes Nathan Pope sad? “The sin that’s around us,” he says. “The bad things in this world.”

Calm, cool, the rooms no brighter than twilight, Dark Pines Studio in Graham is like a resort for musicians. Away from distractions, they can concentrate on their craft.

Lindy helps Nathan unload a 50-pound amplifier, then heads to the car for the next two hours. “He doesn’t like me to be here when he’s recording,” she says. “He wants to be with the guys.”

In a wood-paneled room with 14-foot ceilings — optimal for acoustics — studio owner and engineer Max Dearing sits behind banks of glowing buttons, sliders, and knobs. He and Chuck face two speakers, each the size of a small refrigerator.

In a glass-sided booth, Nathan sits on a stool with his headphones on. Max hits “record,” and Nathan jabs at the strings on his Gibson, playing a sequence of brusque, chunky chords. But he fumbles at the break.

“We’ll end up doing it again,” Chuck murmurs to Max.

“We may have something here,” says Chuck, who coaches his protégé on self-discipline and focus as well as technique. “He’s working on his timing. He’s a perfectionist.”

“It’s cool to see his excitement,” Chuck goes on. “But to his credit, Nathan knows he has a job to do. I’ve seen and taught 13-year-olds. He’s different.”

Swampy, sultry, the song seems to ooze through the speakers.

Chuck points at Nathan in the booth, encouraging him, and pumps his fist in time.

Nathan listens to the track. He pops a butterscotch candy into his mouth. “I think this is perfect. I can’t do it any better,” he says. “I can’t get over it.”

“Get over it now,” Chuck chides, “because you have to play another song.”

Nathan retreats to his spot behind the glass and launches into “I’m Not Alone.”

“They think I’m all done in, just looking for home,” Nathan sings.

He flubs the chords. “Do it again,” Chuck says.

His fingers stumble. He starts over.

“The devil tries to get us again and again.”

“I fussed it up,” Nathan sighs.

“Let’s try it from the top again,” Max says.

Chuck points at him, counting to four with his fingers — and then a thumbs-up.

Ten minutes before midnight, in the depths of a Mississippi summer, Nathan, then 12, stood at the Devil’s Crossroads, the intersection of U.S. 61 and U.S. 49 in Clarksdale. Here, the story goes, blues legend Robert Johnson sold his soul to the devil in exchange for the ability to play the guitar.

“Every time a car would come by, or anything would move, I’d freak out,” Nathan says.

Nathan’s experience on this hallowed ground inspired him to write “Devil’s Crossroads.” He’s performing the song before a Friday dinner crowd that has packed the Eddy Pub in Saxapahaw. A tip jar sits at the entrance. The aroma of french fries and pork chops forms contrails behind the waitresses. Seemingly unaware of the clatter of plates and forks, or the barroom chatter, Nathan perches on a stool, his shoulder-length, straight blond hair tinged with blue. He begins strumming his acoustic guitar, Nicholas.

“He used to have blue hair,” Lindy whispers. “I did it for him. His hair’s been an issue.”

“Well you know I’m waiting on the devil,” Nathan sings, as a preamble.

He works up to the full song: “I went down to the crossroads, with my soul in my hand …”

Nathan breaks into a nimble, speedy solo. The chatter stops. The people at the bar rest their forks.

After the set, Chuck, who is headlining, again acts as emcee. “Thanks for coming out,” he tells the crowd, which has returned to their fries and beers, “and seeing what the future of music is.”

Breathless, Nathan briefly returns to his mom’s table and then darts outside. He loads his Nicholas into the family SUV, pulls out his skateboard, and cruises through the parking lot until after dark. Time, it seems, just dances by.