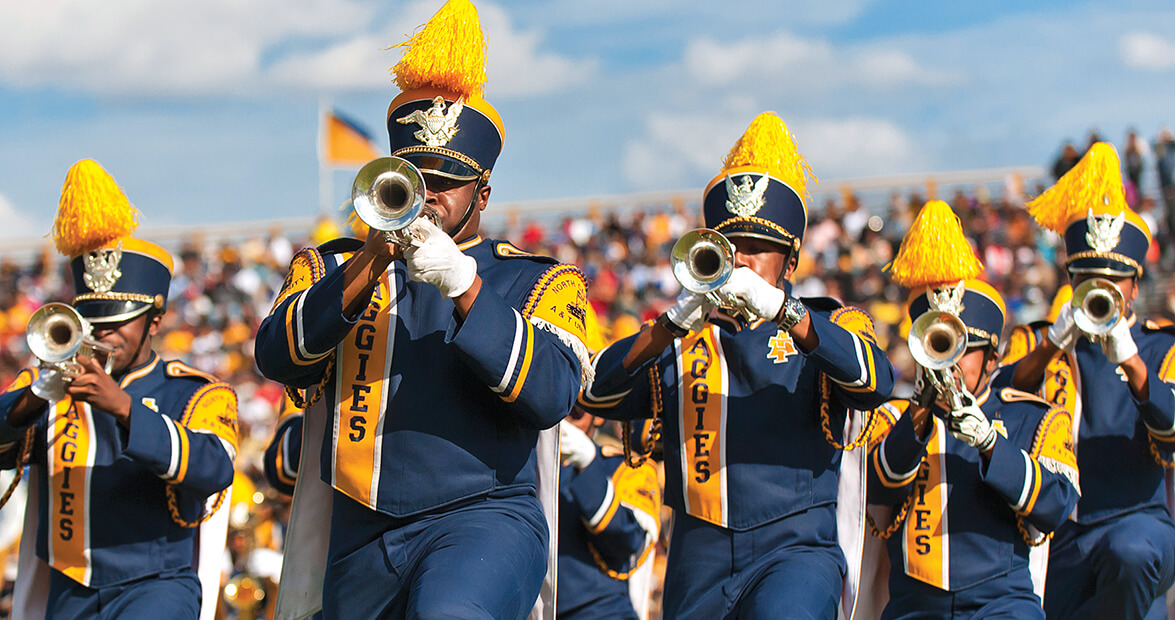 Consider for a moment the misunderstood euphonium. Too little to be a tuba. Often mistaken for a baritone horn.

Well, Fayetteville’s James Richardson II, a sophomore at North Carolina A&T State University in Greensboro, plays the euphonium, and he’s not ashamed to admit it. He would probably play a Fisher-Price accordion — proudly — as long as it allowed him to perform with the university’s Blue and Gold Marching Machine.

“I never even listened to marching band music until about the seventh or eighth grade,” Richardson says. Then he heard The Machine. “They were so powerful and musical and energetic — that’s what made me want to go there.”

Welcome to Aggieland, home of North Carolina’s most celebrated marching band, one that has participated in the Honda Battle of the Bands Invitational Showcase multiple times, and even won it in 2014. After all, what other college band in the state has inspired a feature-length movie, not to mention a sequel? Only this one.

The band at A&T dates back to 1918, when the school became the first black college in the state to have a band. That initial 50-piece ensemble quickly became the backbone of the school’s music department. During those early years, a few of the band members used their musical skills to serve the country, participating in regiments of black military bands. In the early 1940s, nearly half the band volunteered, playing at the Navy Pre-Flight School in Chapel Hill and later at Pearl Harbor.

It wasn’t until 1947, with the arrival of new band director Walter F. Carlson, that the marching band began to establish its distinct identity, characterized by military-style, high-stepping precision marching. Carlson graduated from A&T, and later earned his master’s degree from the University of Michigan. He patterned the band after programs he’d seen at Michigan and Ohio State, even drawing inspiration from Michigan’s band uniforms to design A&T’s flashy blue-and-gold uniforms.

Carlson also incorporated dancing into the band’s energetic and entertaining field shows, as well as its highly popular drumline, nicknamed Cold Steel, which gives the band its signature up-tempo cadence. That was in the 1960s — and the change greatly enhanced the band’s national reputation. That reputation got an extra boost in 2002, with the release of the feature film Drumline, starring Nick Cannon. The film focuses on fictional Atlanta A&T University — a historically black college that takes tremendous pride in its marching band — and was inspired by North Carolina A&T. So was the 2014 sequel, Drumline: A New Beat.

Something else the Blue and Gold Marching Machine has going for it is a tradition of family, both literally and figuratively. Dr. Kenneth Ruff, a 1990 A&T graduate — and former drum major for The Machine — now serves as director of bands at his alma mater. He marched with the mothers and fathers of the students he has now, but says the sense of family extends beyond bloodlines. “Once you join in, you stay in,” Ruff says. “These students form bonds here that they’ll keep for the rest of their lives.”

Kayla Pratt, a junior piccolo player from Fayetteville, learned about the A&T band from her father, Roosevelt Pratt Jr., a drum major with the band in the 1980s. “From the time I was little, the band was something he talked about every day,” she says with a chuckle. “It’s really cool how that tradition and legacy flowed down the line to me.”

Pratt says she feels that tradition and legacy every time she gets ready for a performance. “When we put that uniform on, we have so much pride,” she says. “We feel like we’re bosses, like everything’s coming into place.”

James Richardson II — the aforementioned euphonium player — is also marching in the high-stepping footsteps of his father, who played trombone in the band in the early 1990s. The elder Richardson is now a high school band director in Fayetteville. The younger Richardson was hooked on the Blue and Gold Marching Machine from the moment he first heard them play. “They were huge, and from the first fanfare they blew, it felt like the wind was coming right at me,” he says. “They blew me away.”