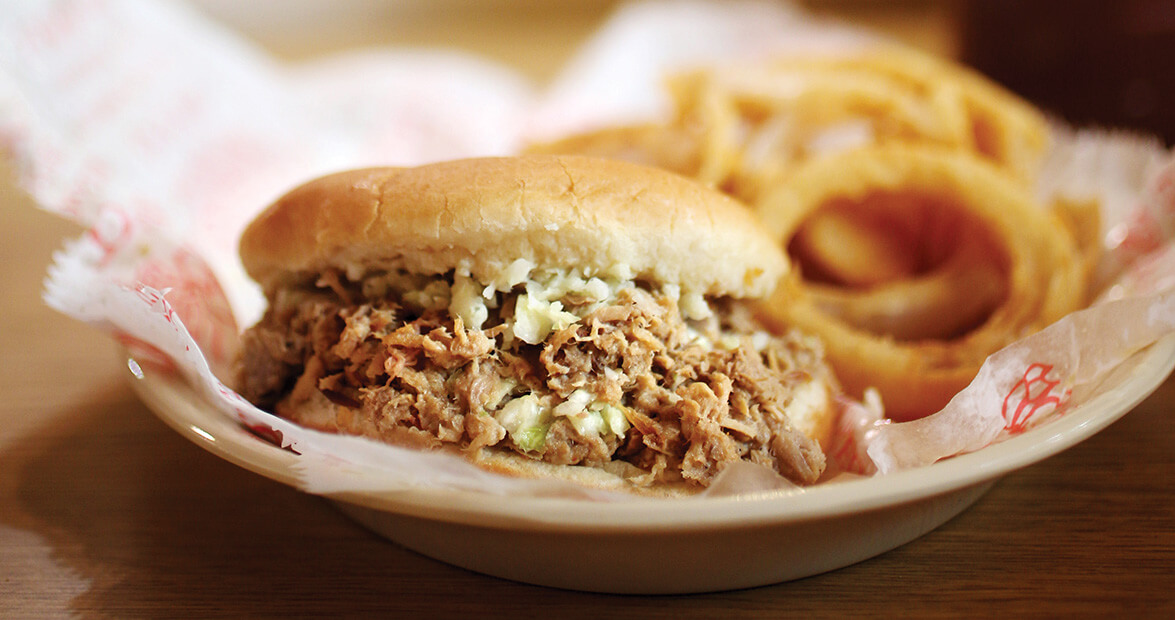 During my summers in college, I worked as server at a barbecue restaurant in Charlotte. With my purple ink pen, I’d scrawl orders in my sauce-stained notepad and hop from table to table, pausing only occasionally to readjust my apron or retie my shoe or breathe.

In slow moments, I’d recollect my thoughts and write them down in that same notepad, filing notes away as material for a book I’d (still) like to write one day called Waitressing: Affirmation You’re Not The Weirdest Person You Know. Here’s a bit of what I learned:

1. Do not question the determination of someone who orders all-you-can-eat pulled pork, no matter how big you think the portion sizes are, because they will, in fact, eat it ALL.

2. To carry around a pitcher of sweet tea to top off customers’ drinks is to be loved forever.

3. That is, unless you spill their drinks on them, which will happen — more than once.

4. The regulars can tell instantly if “you’re not from around here.” Confession: I was born in Arizona, but I got here as fast as I could. Please forgive me.

5. Lastly, never, ever get into an argument with your table about the merits of Lexington- versus Eastern-style sauce. The one server who did didn’t last long.

I learned a lot in those three years, but sometimes the job left me with more questions than answers. How exactly did these two styles of barbecue, Eastern- and Lexington-style, emerge in North Carolina? (It should be noted that there’s possibly a third style emerging in the western part of the state.) Why is barbecue preference the subject of so many feuds in our state? These questions have boggled my mind long enough, so now I’m getting answers.

Questions like these would require the knowledge of an expert, so I reached out to John Shelton Reed, co-author of Holy Smoke: The Big Book of North Carolina Barbecue, and he happily fills me in.

Barbecue as we know and love it got its start in the Caribbean, of all places, Reed says. There are descriptions of island barbecues dating back to the 1500s, which would involve cooking a less appetizing variety of meat — we’re talking alligators, lizards, and fish — low ‘n’ slow and basting it with lemon juice and red peppers.

When the Spanish introduced hogs to both the Caribbean and the southeastern United States, pork became the meat of choice.

Reed says it’s likely that this Caribbean cooking tradition was introduced to the mainland by slaves in the early 19th century. There’s also a possibility that Haitian refugees who sought asylum in America following a revolution in their country played a role in this introduction, too.

But since lemons were hard to find north of Florida, vinegar was substituted for lemon juice elsewhere in the United States.

The South began to see a partitioning of barbecue styles following the commercial introduction of ketchup. Heinz unveiled the condiment at Centennial International Exhibition of 1876.

Eastern North Carolina kept to tradition while North Carolinians west of Raleigh and others throughout the South began experimenting with different types of sauce and meat.

So there you have it: Eastern-style barbecue is the truest there is — or not.

Ah, right. Word choice is critical in all matters dealing with pork and politics. My sincerest apologies, truest and original are two very different things.

But that still doesn’t address how exactly Lexington-style barbecue veered away from NC Coastal Plain tradition, and it’s important we answer it.

Full-fledged Lexington-style barbecue — or what we should actually call “Piedmont-style,” as to not forget Salisbury’s role in all of this — originated during World War I, Reed says.

Barbecue was sold on the streets in pop-up stands. It was much easier to cart around meat from pork shoulder as opposed to a whole hog you’d smoke at a pig pickin’.

Five of the men who are credited with creating this new Piedmont-style were all of German decent, according to the geneology research conducted by Reed’s wife, Dale. Though their Pennsylvania Dutch ancestors had settled in the Piedmont in the 1700s, these men still loved a delicacy specific to one region of Bavaria: pork shoulder with a sweet and sour vinegar sauce. Therefore, Piedmont-style barbecue is a take on the German dish, Reed says.

Contrary to the belief of some Eastern-style purists, Piedmont-style sauce is not tomato-based. It still uses lots of vinegar but has a slight touch of ketchup that makes the mixture sweeter and redder, but not thicker. (If you’re going to get angry about tomato-based blasphemy, you can blame the likes of Kansas City for that thick, flavor-masking hogwash.) Now whether a sauce that’s mixed with ketchup is actually unholy is up for personal interpretation.

The next time you clinch your jaw or wag your finger when entering a debate with someone who stands on the opposite side of the Great NC Barbecue Divide, remember you might have more in common with this person than you think.

“Those two sauces are much more like each other than either one is like what you’d find in Kansas City or Memphis,” Reed says.

And hey, we can all agree that pulled pork — not brisket or ribs — reigns supreme.

Perhaps it’s best we approach this NC barbecue debate with the same sensibility and level-headedness as we do when examining the rivalry between UNC-CH and Duke. Sure, one school’s choice of blue is questionable, but both universities are fine academic institutions with excellent basketba—I’m sorry. I can’t do this. What am I even saying right now? Go Heels! Go America! Go Eastern-style barbecue! So much for remaining an unbiased journalist in this whole matter.

Regardless of where your allegiance falls, one thing is for certain: This state would not be the same without heated conversations about what’s in the smoker. So keep the debate retorts and backhanded “Bless your hearts” coming, pass the pig, and always remember that our barbecue will forever best Texas’s.