In this series, we’ll share ideas to get you excited about jumping on a train to explore the state! Find out where to go, what to do, and what to eat in downtowns across North Carolina — all within walking distance of the train station. This month, we’re heading to Raleigh.

When you first step off your train in Raleigh’s Union Station, you might find it hard to go anywhere else. Union Station, which opened to the public in 2018, is its own destination. With sweeping floor-to-ceiling windows, mid-century-modern seating, and unbeatable views of the downtown Capitol, the station’s welcoming embrace is as thrilling as it is comforting.

It’s obvious that Clearscapes, the architectural firm charged with renovating Union Station, imagined a structure that would be memorable and authentic — unique to Raleigh. A mid-century-style framework layered on the former industrial bay nods to the capital’s post-World War II growth. And the new façade of clear and translucent glass captures the essence of trains and movement.

Before you embark on your Raleigh adventure, take a minute to climb the steps to Union Station’s observation deck, where you can count boxcars snaking away in the distance or watch passenger trains hush and squeal as they come home. Get a good look at the city that spreads around you, the massive old-growth trees reaching as high as some of the buildings. Take it in and get ready to roll. 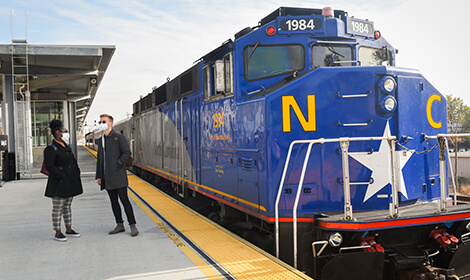 Whether it’s lunch time, snack time, or “5 o’clock somewhere,” the Morgan Street Food Hall has exactly what you’re craving — and you don’t even have to put in effort after your train ride: The renovated, industrial building is just three blocks north of the train station and is filled with local eateries. You can get Indian, Japanese, Mexican, Mediterranean, or good old Southern eats. Have mimosas at the outdoor bar; a lobster roll from Cousins Maine Lobster, or truffle fries and one of the best burgers in town at CowBar. CowBar owner and chef Dan Yeager enjoys mingling with the locals and first-timers at the food hall. “Just seeing the regulars and new customers daily and hearing about their experience is the most rewarding part of having a restaurant,” he says. Don’t forget to take your ice cream-eating experience to the next level at Raleigh Rolls, where friendly folks smash your favorite treats, like Oreos, into ice cream and roll it into frosty pirouettes before your eyes. 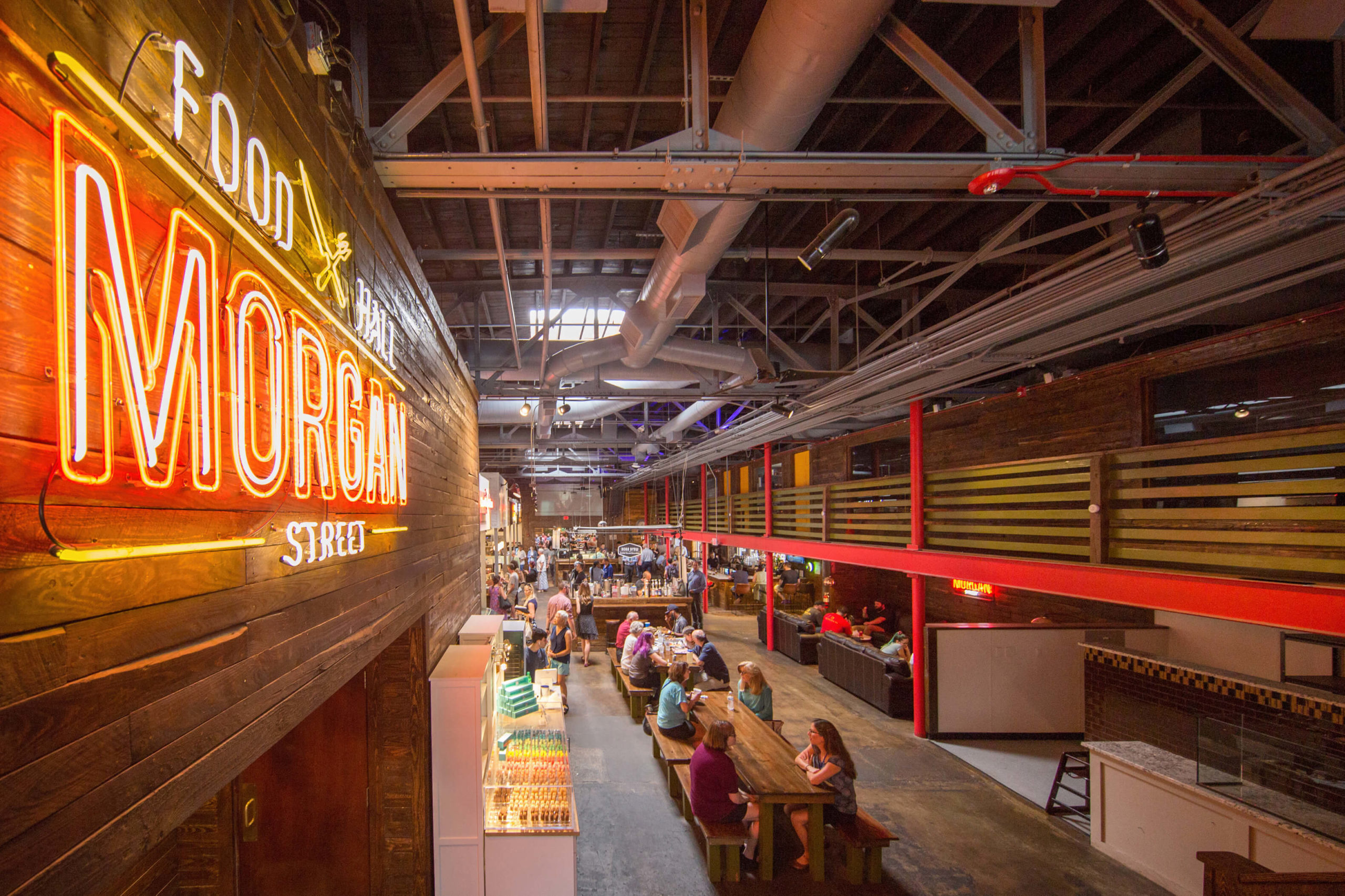 You’re in the state capital, so seeing the Capitol building is a must: Constructed in 1840, the State Capitol building is an architecture and history junkie’s dream come true. Stroll half a mile down West Morgan Street from Morgan Street Food Hall to get there: With sides that face north, south, east, and west, and a rotunda to wander, the Greek-Revival structure will make your jaw drop when you step inside. Once in, you’re free to wander the old General Assembly chambers and offices. If you don’t mind the narrow stairs, take yourself to the library at the top, where the walls are lined with ancient books and you can peer out the windows into the tops of old oaks.

Seeing the Capitol building is a must. Constructed in 1840, the Greek-Revival structure will make your jaw drop when you step inside. photograph by Brian Strickland

Across the street from the Capitol, twin downtown Raleigh museum stars sit facing each other: The North Carolina Museum of History and the North Carolina Museum of Natural Sciences. Start with a little history, and explore more than six centuries of North Carolina, from American Indian artifacts to sports culture. The museum is an immersive experience and always has special exhibits rotating through that are guaranteed to wow both young and old. Don’t miss “Toy Boom,” an exhibit featuring toys from the ’50s and ’60s that is sure to spark some nostalgia.

At the North Carolina Museum of History, you can explore more than six centuries of North Carolina, from American Indian artifacts to sports culture, through immersive experiences and special exhibits. photograph by Keenan Hairston

After a taste of history, head next door to the North Carolina Museum of Natural Sciences, which celebrates our wonderful world, from dinosaurs to insects to coyotes, mountain streams to deep ocean dives. “Guests will engage with the state’s immense biodiversity from the mountains to the sea and have a rare opportunity to witness research laboratories in action, as scientists deepen our understanding of the natural world,” says Dr. Eric Dorfman, director and CEO of the museum. Bonus: The museum shows short, 3D nature movies in its theater throughout the day. Double bonus: In addition to great snacks, the Daily Planet Café has a bar offering some of our best local brews when you need a quick break from exploring. 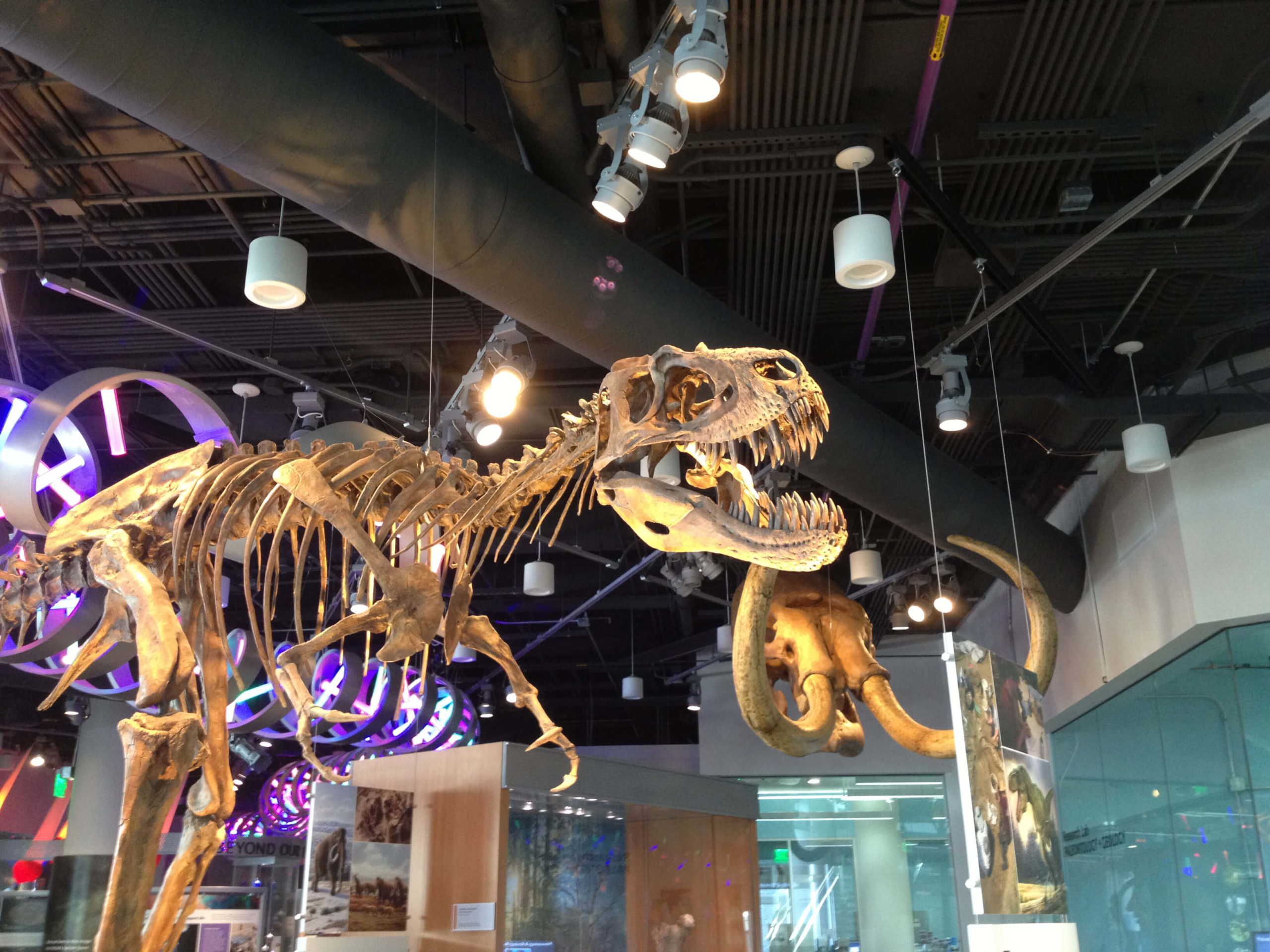 Give Your Kids the Best Day Ever

Just half a mile from the North Carolina Museum of Natural Sciences down North Blount Street is a wonderland for young children (children of all ages can find something to do here, but parents say kids 10 and under enjoy the museum best). If you want to wear them out, you can’t do much better than the Marbles Kids Museum. Release them into the wild world of fun and education, with non-stop, hands-on activities. Buy tickets in advance to make sure you have a spot. 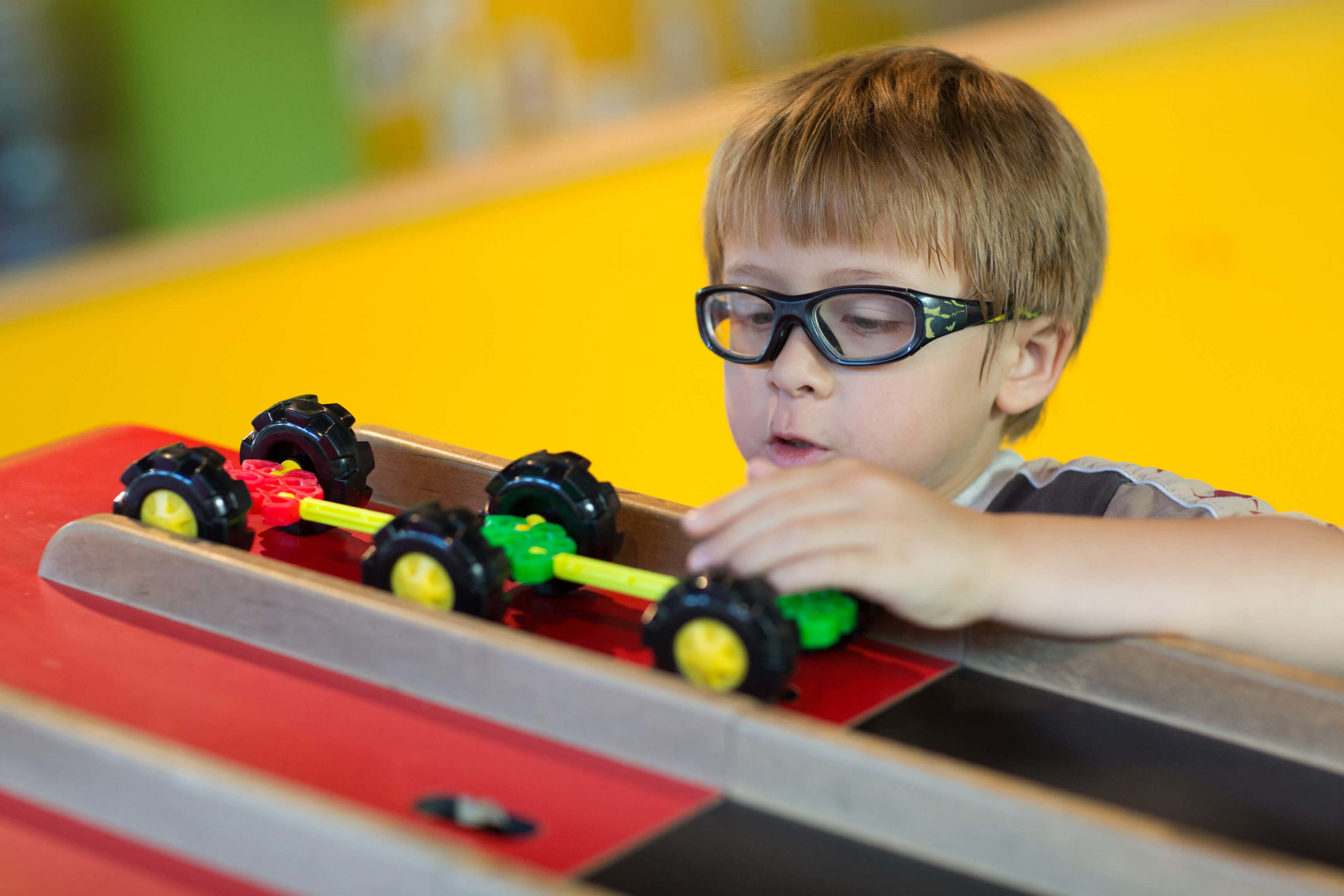 At the Marbles Kids Museum, kids can enjoy the wild world of fun and education, with non-stop, hands-on activities.

Be Your Most “Right Now” with Art

After the kids run wild, head back down East Martin Street toward the train station. Across the street from Union Station, you’ll see the Contemporary Art Museum’s modern, angular awning inviting you to come explore the galleries inside what used to be a produce warehouse. Inside, you’ll find an immersive art experience, with rotating exhibits and often some hands-on activities for the kids. Though many art museums offer a walk down art’s memory lane, CAM showcases only art from living artists. Open after noon most days, CAM is a great way to put the cap on your capital day. 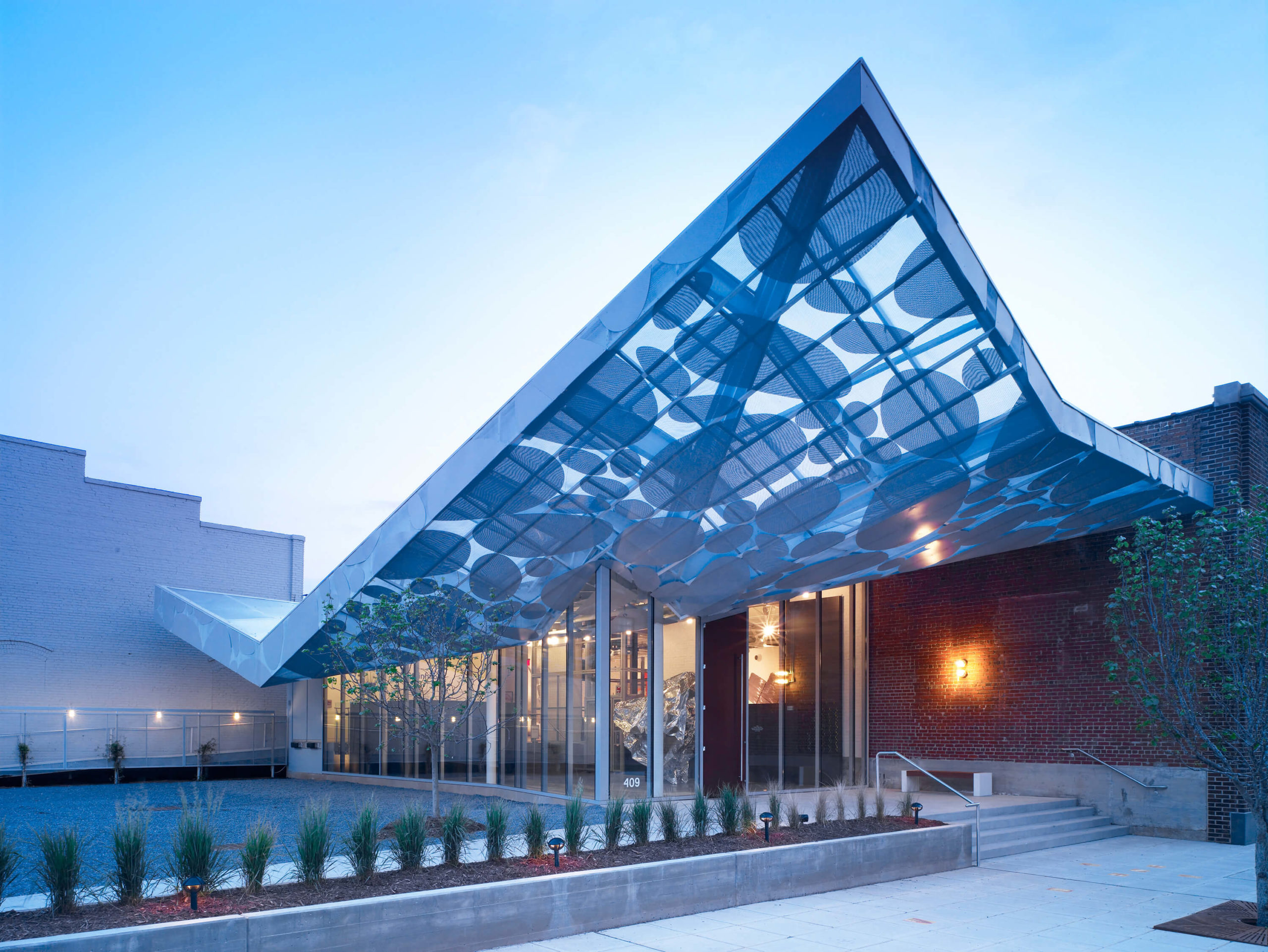 At the Contemporary Art Museum, which only showcases art from living artists, you’ll find an immersive art experience, with rotating exhibits and often some hands-on activities for the kids.

Have Afternoon Tea Your Way

Some of us need a little pick-me-up in the afternoon. If you have plenty of time before your train leaves the station, head over to the Raleigh Times, about a half mile east from CAM. Grab an outdoor table—perfect for people-watching—and order a plate of perfect fries and your favorite adult beverage. Just down the street on Martin Street, grab a jolt of specially crafted java at 42 & Lawrence (we’re fans of their nitro cold brews) before walking west toward Union Station.

If time is of the essence after your visit to CAM, stay close to Union Station and choose from a soothing cup of the carefully brewed teas that pair well with the delicate snacks offered at the serene Heirloom, just a block from the train station.

Choose from a soothing cup of the carefully brewed teas that pair well with the delicate snacks offered at the serene Heirloom. photograph by Brian Strickland

Back at Union Station, settle in to one of the comfortable seats and enjoy the last few minutes of daylight streaming in through the floor-to-ceiling windows. Whether you’re alone or with a friend or two, watch the people with places to go and those, like you, who are about to board a lumbering train. There, you can climb the stairs to the viewing platform to see the city and the trees reaching miles beyond you, and spot your train as it rolls in to take you home.