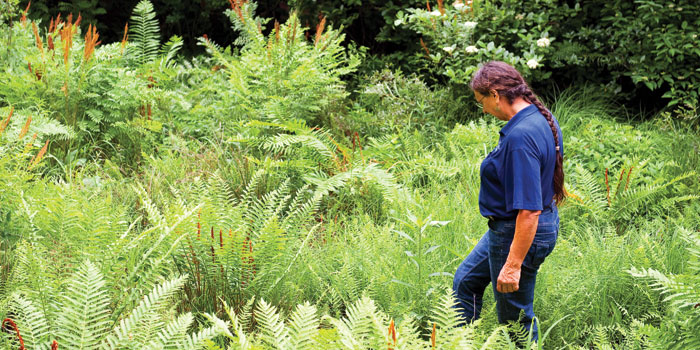 The highway my family traveled to the beach in the summers of my youth was a two-lane track that ran past sandy fields of cotton and corn, soybeans and tobacco; fields dotted with weathered barns, old farmhouses, and straggly stands of pines.

Close to the coast, the scenery changed to swampland. Trees stood on strange-looking roots that reached from the still waters like gnarled fingers. I shuddered to think what was watching and waiting in that black water. Snakes for sure. Alligators most likely. And possibly creepier creatures that would make gators seem tame.

You might assume nothing could entice a tentative little fellow like I was to venture near those spooky waters, but you’d be wrong. Sometimes on trips back home from the beach, my father pulled the car over as we passed the swamp, and my younger brother and I raced to the water’s edge. The lure? Cattails. We thought the tall stalks with furry, cigar-shaped tops were exotic.

We never considered that the cattails were not ours for the taking. Or that we might upset a delicate balance of nature by picking them. We just pulled them up as souvenirs and moved on.

Lots of people scouted roadsides in the Green Swamp of eastern North Carolina 30 or 40 years ago, looking for Venus flytraps and pitcher plants. Maybe those people didn’t give much thought to what they were doing either. Insect-eating plants fascinated them, so they dug them up.

If my brother and I had known Venus flytraps lived along the swampy stretch of road where we plucked cattails, I’m sure we would have scooped them out of the ground, too, and carried them home in Dixie cups.

You won’t likely find Venus flytraps growing by the highway these days. And most of us aren’t cut out for trekking into a swamp or backwoods bog to find them. It’s much easier to drive to the North Carolina Zoological Park south of Asheboro and stroll through the North America portion until you come to the “Cypress Swamp” exhibit. Here, you’ll find flytraps and pitcher plants in the sphagnum moss on the edge of the “swamp.”

Most folks visit the zoo to see the animals — about 1,100 representing more than 250 species from two continents. But the N.C. Zoo is the largest walk-through, natural-habitat zoo in the world. And plants make the re-creation of each habitat more realistic. The zoo’s plant inventory is huge, some 30,000 plants and more than 3,000 species, tended by a
staff of 43.

Nell Allen, the rare plant curator, is certain the plants make a difference to zoo-goers, whether or not they pay attention to them or read the signs scattered throughout the park that tell about them.

“Even the person not noticing the plants,” she says, “is going to have a richer experience than they would looking at a black bear in a pen with a dirt floor.”

And the animals appreciate the scenery, too.

“I hear that the grizzly just sits under his muscadine vine during the ripe season waiting for the grapes to fall,”
Allen says.

Most people can’t tell one plant from another — at the zoo or in their own neighborhood, Allen says. To many, a leafy landscape is no more than a “green wall.”

Allen spends part of her time as curator teaching people about plants, so they can start to separate the green wall into its components, one plant at a time. The more people know about plants, the more likely they’ll care about preserving them.

People’s lack of curiosity for plants pushed Allen toward her current position at the zoo. She spent time in conventional landscaping, but she got bored when every customer preferred to line his driveway with Bradford pear trees.

Now Allen supervises a rare plant collection with 14 rare or endangered species from across North Carolina.

“You get to see stuff here that you’d never see roaming around, and yet they’re part of North Carolina’s heritage,” Allen says. “We try to get plants that are interesting to look at and have a story.”

Plants with a purpose

Awhile back, Allen visited a roadside stand of endangered ‘Schweinitz’s’ sunflowers in Randolph County. The driver of a passing car stopped to ask what she was doing. Allen told her, and she drove away shaking her head.

Allen knows some people think it’s silly to save endangered plants, and state law seems to agree. A rare plant on private property in North Carolina has little legal protection. The property owner can plow up a field of endangered plants with impunity.

An outsider who does the same thing could face minor criminal charges. In January, three people were arrested on a misdemeanor charge of uprooting an endangered species — about 200 Venus flytraps — without permission on a coastal preserve run by a nonprofit group. The fine? $25.

“Every species has a right to exist … whether it’s useful to humans or not,” Allen says. “It’s not up to us to wipe something off the face of the earth.”

She tells visitors about the history of useful plants, that rubber and many important medicines were first derived from plants. That each plant has a purpose, sometimes obvious, but sometimes understated.

“Every time we wipe out a species, we don’t know what we’ve lost,” Allen says. “It’s like throwing away an unopened package.” 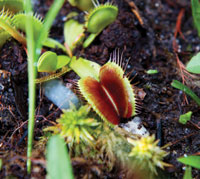 The Venus flytrap, on exhibit at the N.C. Zoo, is one of the few plants in the world capable of rapid movement. The carnivorous perennial with two-lobed leaves snaps shut on prey in a tenth of a second. Scientists don’t completely understand how an organism with no nervous system, no muscles, and no tendons accomplishes the feat. But they know that the bright red color inside the lobes attracts insects. An insect crawling inside touches tiny hairs that trigger the closing mechanism.

If a bug is small, the trap doesn’t close for a few seconds. The delay allows the insect to escape. Small insects don’t supply enough nutrients to offset the energy the plant uses to acquire it. If the prey escapes or if the object that triggers the leaf to close isn’t food, the leaf reopens in about 12 hours.

If an insect struggles, the trap closes tightly, and digestion begins. Enzymes break down the insect’s body, providing nitrogen to supplement what the plant gets from the air and soil. The process takes several days.

The state of North Carolina lists the plant as “significantly rare, limited” and of “special concern” because its natural habitat is so small — within a radius of about 50 miles around Wilmington and three counties in South Carolina. Threats to its survival include real estate development and recent suppression of natural wildfires, which allows taller vegetation to grow and shade out slow-growing flytraps that like sunny, open spaces.

Chip Womick writes for The Courier-Tribune in Asheboro. His most recent story for Our State was “The Real Jugtown” (June 2012).