A Collection of Stories on
North Carolina’s Lighthouses

In the beginning, there was a fire on a hill. The fire burned from rocky outcroppings or sandy swales, from the Caribbean to the Caspian Sea, from ancient Thule to the latticework of coastal rivers that poured from the Carolina wilds. These fires were the first lighthouses, blazes built as high as a man could climb. And wherever they burned, out on the margin between land and sea, the meaning of their lights — peril, port, enemy, home — depended entirely on the designs of the men who searched for their flickering above the waves.

It was only a matter of time before the fires were raised as high as a man could build a tower. The first lighthouse known to historians was the Pharos of Alexandria, a 400-foot-tall spire of white marble that rose over the ancient Egyptian port. It was a day-night beacon of the first order. At night, massive fires could be seen for 30 miles. By day, plumes of black smoke rose high above. Considered one of the Seven Wonders of the Ancient World, it stood for nearly 1,600 years until felled by an earthquake in 1375.

More than 400 years later, the first of North Carolina’s lighthouses rose above the dunes — the old Bald Head Light Station, built in 1797 but destined to stand only 16 years. Ever since, lighthouses, lightships, and elevated river lights have come and gone, made necessary by rough seas and dangerous waters, and felled by the same.

Seven historic lighthouses stand on the Tar Heel shore, having survived the ravages of storms, the malignant passing of time, thin maintenance budgets, and the inexorable march of the shorelines themselves.

They still wink and blink, from Currituck Beach and Bodie Island to Cape Hatteras and Ocracoke, Cape Lookout and Oak Island and Bald Head.

Most North Carolina lighthouses fall under the classification of coastal lights, structures built to warn mariners of treacherous shoals lying just offshore. Others are harbor lights, whose presence guides ships to protected bays and moorings. No matter their purpose, our sentinels of the sea include a spate of lighthouse superlatives: the nation’s tallest bright lighthouse and its most recognized, the most recently restored, and an unusual octagonal tower nearly 200 years old. Read more. 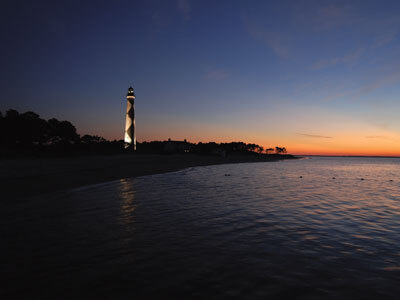 Cape Lookout Lighthouse has been waving sailors off the deadly shoals of North Carolina’s coast for 150 years.

It has remained steadfast through deadly hurricanes that wiped out entire villages and has managed to stand its ground even as the sand beneath it shifted and endangered its very existence.

The thin strip of island wilderness on which it stands was rescued from the threat of development in the 1960s, when the state bought the land from would-be seaside homeowners and 10 years later created Cape Lookout National Seashore.

The light, however, may have disappeared altogether had a ragtag group of Confederate soldiers completed a mission to destroy the light after it fell into Union hands.

And, depending on whose account you read, they nearly did. Read more. 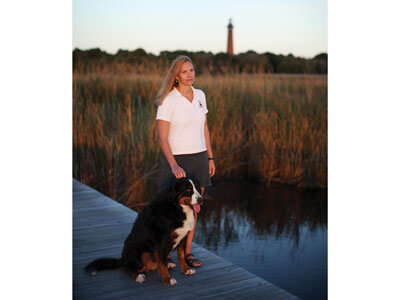 Whether it’s Disney’s Pete’s Dragon or sexy Rex(y) Harrison in The Ghost and Mrs. Muir, everyone has a romantic notion about lighthouses — North Carolinians, especially so. But sailors, beware. Currituck is not a welcoming lighthouse like Ocracoke, but a warning lighthouse: Watch out for the shoals!

Which doesn’t mean that one of its two keepers, Meghan Agresto, isn’t welcoming. She’s so friendly, so full of lighthouse history and anecdotes, that she’s in voice therapy to heal the overworked nodules on her vocal cords.

It takes a special person to live in a town where the population drops from 55,000 in the summer to 500 in the winter. But Agresto does, in the prefabricated home preserved by the Outer Banks Conservationists. She’s 40 steps from the 142-year-old towering beacon, which opened to the public in 1991. “We have to be tall here in North Carolina because we have no shore cliffs,” Agresto says of our lighthouses. Read more. 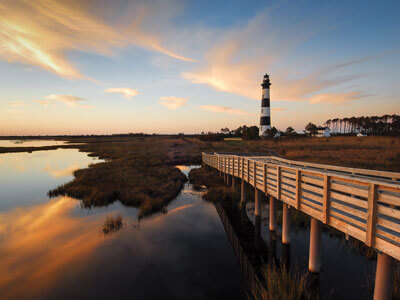 They gather on Friday night at the Comfort Inn South Oceanfront in Nags Head, where a salty wind whips across the second-floor deck, and a full moon slowly arcs above the Atlantic.

They’ve flown in from Texas and Minnesota, California and Colorado; one family traveled all the way from Alaska. They reunite with children and grandkids, great-aunts and uncles. Some meet cousins they never knew they had.

They’ve brought photos and heirlooms, a painted doll, pine-needle baskets. Pieces of their pasts. All connected to the lighthouse.

Most have never been inside the black-and-white tower on Bodie Island, where their ancestors kept the beacon burning. In its 141-year history, the lighthouse had only been open to the public for a couple days in celebration of the U.S. Lighthouse Service bicentennial in 1988. Until last year.

So this weekend in mid-October, as autumn blows in and the National Park Service prepares to close the lighthouse for the season, more than 300 descendants of the 34 keepers are getting together to celebrate the tower’s $5 million restoration. To share stories of hardships and hurricanes, climbing dogs and flying cats, hot biscuits, cold stairs, and the constant comfort of that steady white light that links their lives. Read more. 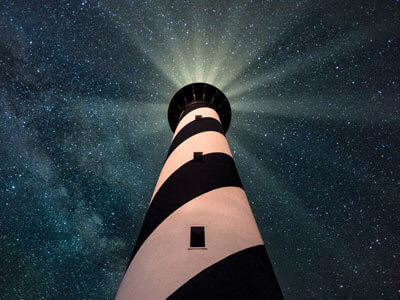 Years ago, when I heard that the Army Corps of Engineers was going to move the Cape Hatteras Lighthouse about half a mile inland ahead of the advancing ocean, I was overcome by a sense of alarm. The thing seemed impossible, a disaster waiting to happen. I imagined the scenario over and over again: the glacial movement of the towering brick structure, then the first tremor as the spiral-painted obelisk twisted ever so slightly and, in cinematic slow motion, began to disintegrate — till all that remained was a rubble of white and black bricks.

Why did I care? Because for me the light was — and still is — a personal beacon that guided my tenuous journey from boyhood to manhood. Immutable, lasting, solid, permanent.

At 18, having survived a two-year sentence at a Catholic high school in Delaware and a bullying dean of students who did his best to break my spirit, I left home. I didn’t exactly run away — my parents knew where I was going — but I didn’t ask their permission and, except for a few weeks each summer during college, I never lived in their house again.

I didn’t know exactly what I was looking for, but whatever it was couldn’t be found anywhere close to home.

I stuffed a sleeping bag, extra clothes, a canteen, a butane stove, and a notebook into a red Kelty backpack, grabbed my old Gibson 12-string guitar, and slipped aboard a Trailways bus bound for New Bern. From there I hitchhiked to Cedar Island, ferried to Ocracoke, hitched another ride that took me across another ferry and at last to Cape Point Campground under the pale of the Hatteras Light. Read more. 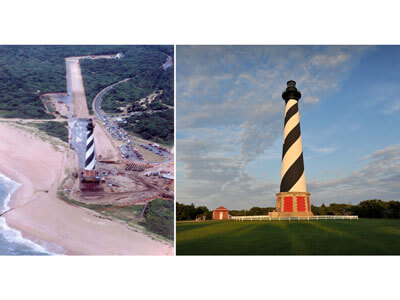 Cape Hatteras Lighthouse: How the Lighthouse was Moved
Written by Katie Quine

When you stand at the foot of Cape Hatteras Lighthouse today, craning your neck toward its top, you’ve got to wonder how they ever found someone to move this thing.

Were straws drawn? Was it a game of Nose Goes? Or, in true Katniss Everdeen fashion, did some chump volunteer as tribute?

Beach erosion is nothing new on an ever-changing barrier island. But in the late 1990s, the receding shoreline got to be too much for the trusty lighthouse with its iconic barber pole stripes. Hatteras had to move, or it would eventually be besieged by waves in the decades to come. Relocating it would be a tall order — a 193-foot-tall one, to be exact.

“I don’t know if I’d want to be the foreman on the move for that very first lift and push,” says Chris Cabral, a supervisory park ranger for Cape Hatteras National Seashore, with a laugh. “I’m sure they didn’t sleep much.”

A lot of folks didn’t sleep well in the months leading up to what was coined “the move of the millennium.” Some tossed and turned at the thought of its relocation, while others saw it as the only option. People argued. They filed lawsuits. The move gave rise to divisiveness formerly unseen by this close-knit community of hardy islanders — but that’s only because everyone cared so deeply about it. And sometimes, when people care deeply, they care loudly. Read more. 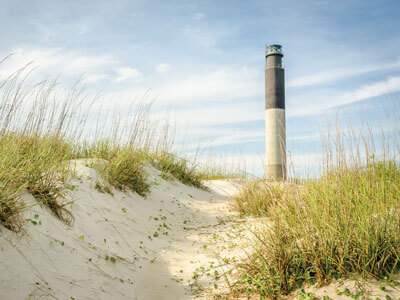 1. In 1958, construction crews built the Oak Island Lighthouse by continuously pouring concrete, raising the tower by a foot every hour. The lighthouse went up in a week. A week. You know how long I’ve been talking about organizing my junk drawer? Months. We could have had at least a dozen new lighthouses in the time I’ve been putzing around.

2. This lighthouse is the last one built in North Carolina, and it has a Cold War look to it. The concrete itself was colored gray, then white, then black at the top, so it never needs painting. The inside looks and echoes like a silo because — wait for it — a silo company built it. There’s no sweeping spiral staircase. Instead, the United States Coast Guard installed steep metal steps and platforms that rise squarely through the center of the lighthouse. This is meant to cut the number of stairs by half, but makes you feel like Jimmy Stewart in Vertigo if you look down. Read more. 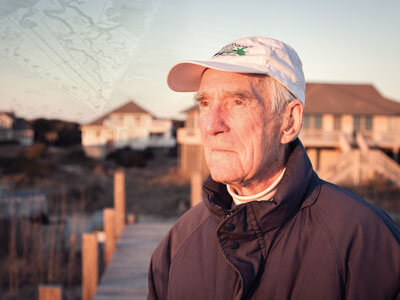 One of the southernmost parts of the Old North State, one of the northernmost points of this country’s subtropics, hard where the warmer, calmer waters of the Cape Fear River clash with the colder, roiling currents of the Atlantic Ocean, Bald Head Island juts into the sea toward the treacherous Frying Pan Shoals. Barrier islands are as much the former as the latter — they are barriers — and so they bear the brunt of the surroundings’ relentless assault. The water and the wind spray tiny shards of salt and sand. The dunes get hit first. They protect the maritime forest. The maritime forest gets hit next. It protects the marsh. A healthy barrier island has these three environments, needs all three, disparate but dependent, and the forest in particular is the most important piece of this delicate alchemy of reciprocity.

On Bald Head, the forest is atypically lush, verdant with red cedar and cabbage palmetto, wild olive and American holly, yaupon and loblolly pine, and finally the linchpin laurel and live oaks. The enduring species of trees sport hardy, waxy leaves, resistant to the corrosive, airborne swirl — but just as important, maybe even more so, they grow in groups, like flocks of birds or schools of fish, better and more able together than they would be alone, and they form a dense, protective canopy. They interact. They cling to each other, and they move as a unit, their branches reaching to touch.

It’s almost as if the trees hold hands because it’s how they survive, and they know they won’t if they don’t. Read more.