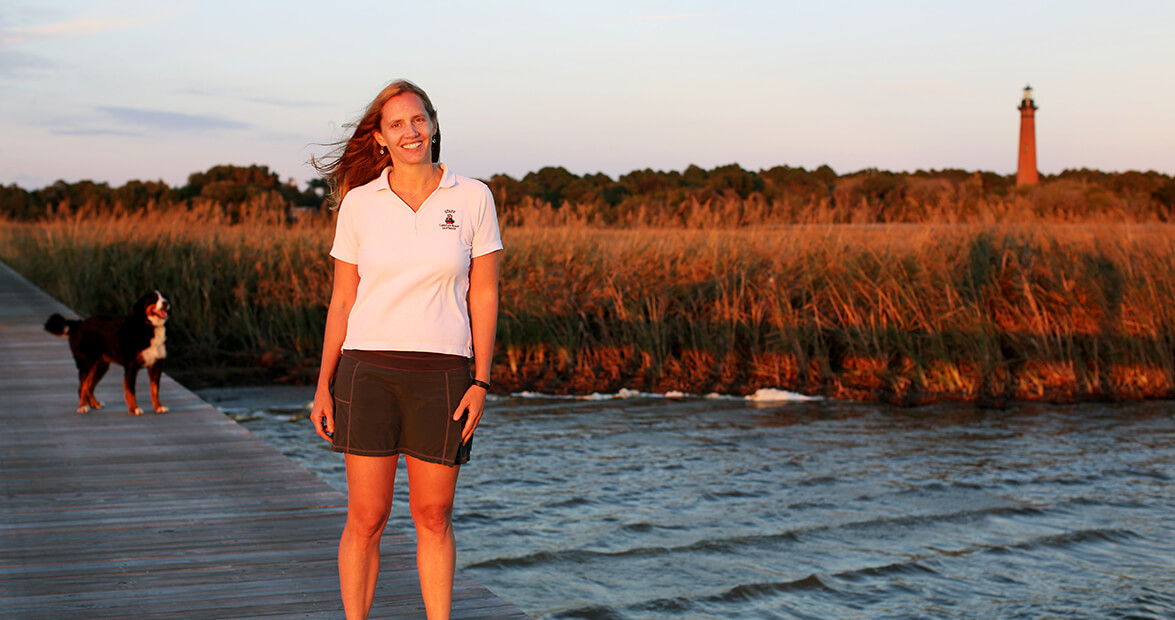 Whether it’s Disney’s Pete’s Dragon or sexy Rex(y) Harrison in The Ghost and Mrs. Muir, everyone has a romantic notion about lighthouses — North Carolinians, especially so. But sailors, beware. Currituck is not a welcoming lighthouse like Ocracoke, but a warning lighthouse: Watch out for the shoals!

Which doesn’t mean that one of its two keepers, Meghan Agresto, isn’t welcoming. She’s so friendly, so full of lighthouse history and anecdotes, that she’s in voice therapy to heal the overworked nodules on her vocal cords.

It takes a special person to live in a town where the population drops from 55,000 in the summer to 500 in the winter. But Agresto does, in the prefabricated home preserved by the Outer Banks Conservationists. She’s 40 steps from the 145-year-old towering beacon, which opened to the public in 1991. “We have to be tall here in North Carolina because we have no shore cliffs,” Agresto says of our lighthouses.

But she’s been at it for more than 10 years now, the most recent in a string of — curiously — female lighthouse keepers at Currituck. Her duties are an interesting mix of the official and the unexpected.

As site manager, she hires and trains tour guides (while leading some 70 per year herself) and is the primary communicator for the lighthouse. People want to get married at the site, which is allowed — as long as the ceremony takes place between 9 a.m. and 5 p.m. — and, because “we’re at the end of the earth,” Agresto deals with her share of eccentrics who migrate to her patch of land, including ghost-hunters. But she doesn’t indulge them: “We’re dedicated to the history of the lighthouse, not to the paranormal.” Still, she adds, the ocean has its mysteries. “Bodies do wash up.”

Is she ever scared? After all, a lighthouse is a natural target for lightning. She makes certain, during a thunderstorm, to wear rubber-soled shoes inside the tower on the metal landings, and to keep her hands away from the metal handrails. Even so, she feels the shocks. She’s there, in the tower, during the storm, because fuses can sometimes blow, and Agresto’s job is to make sure that the light keeps burning, both for historical accuracy and because small craft still use the lighthouse as a navigational beacon. Think of it: There’s an assumption that the light will be on.

Electrified since 1933, a 1,000-watt bulb pulses three seconds on, 17 seconds off, in an effort to minimize light pollution, and can be seen for 18 nautical miles. You’d be surprised that the bulb is wide, broad, and long, only “about the size of a baking potato,” and replaces the lard that once served as lighthouse “fuel,” until the switch to kerosene in the 1880s. The Coast Guard is responsible for changing the bulb, which lasts a good long time — years, in fact. If one expires, another is programmed to kick in. The lens, however, is the original lens from 1875.

For certain, Agresto is never bored. She has two children, and because the nearest public school is so far away, off-island, she started a school for local children. People bring rescue animals (goats, a chicken) to the island, and they somehow fall under her care. In her down time, Agresto travels to Washington, D.C., to learn even more about lighthouses and to update the thick binders of information she distributes to her tour guides.

That’s beyond the call of lighthouse keeper duty. That’s a calling.